Plants can contain memories. That is, beyond the memories within their genetic make up, they have memories tied up within them that can be deeply personal to the grower planting them.

Some plants contain the memory of place from where they came. Galanthus Bagpuize Virginia, of which I recently planted bulbs in my new Sheffield garden, is a reminder of visits to Kingston Bagpuize Garden in West Oxfordshire. At one point I lived in Witney, which was only a few miles away from the garden, and even when we moved back to Oxford, it was close enough that it became an almost semi-annual pilgrimage at the end of each winter. The garden at Kingston Bagpuize contains carpets of snowdrops, aconites and crocuses and are a welcome delight as winter and the long dark days are coming to an end, and our hopes for Spring and a new growing season are ignited. As snowdrops like to hybridise, Kingston Bagpuize ended up with it’s own variety of Galanthus. 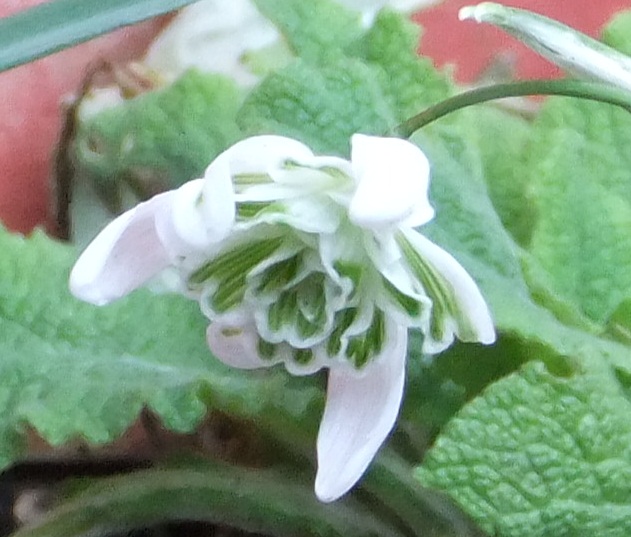 On one visit a few years ago I wished to purchase some for my own garden (back when we lived in Oxford); sadly none were available on the plant stall. But joy! The owner was happy to dig some up for me and I was able to take some home. They did well in the area of my Oxford garden in which they had been planted, and fortunately they came up before we moved to Sheffield last March, even through the heavy snow, so I dug up a batch to move with me. I now am awaiting with bated breath to see if I will at least get the leaves of Galanthus Bagpuize Virginia come up this year. Snowdrops can take a couple of years to settle in, so I’m not expecting flowers this year, but based on previous experience if I get the leaves this year, then all should bode well for a new flowering of this lovely reminder of a plant and place from where it comes.

This plant contains memories not just of the regular and highly enjoyable garden visits, but also of the generous gardener who happily shared her snowdrops with me (gardeners are the most generous people!), as well as of some lovely Oxon friends such as Kate Griffin and J-P, who joined me in visiting the garden. 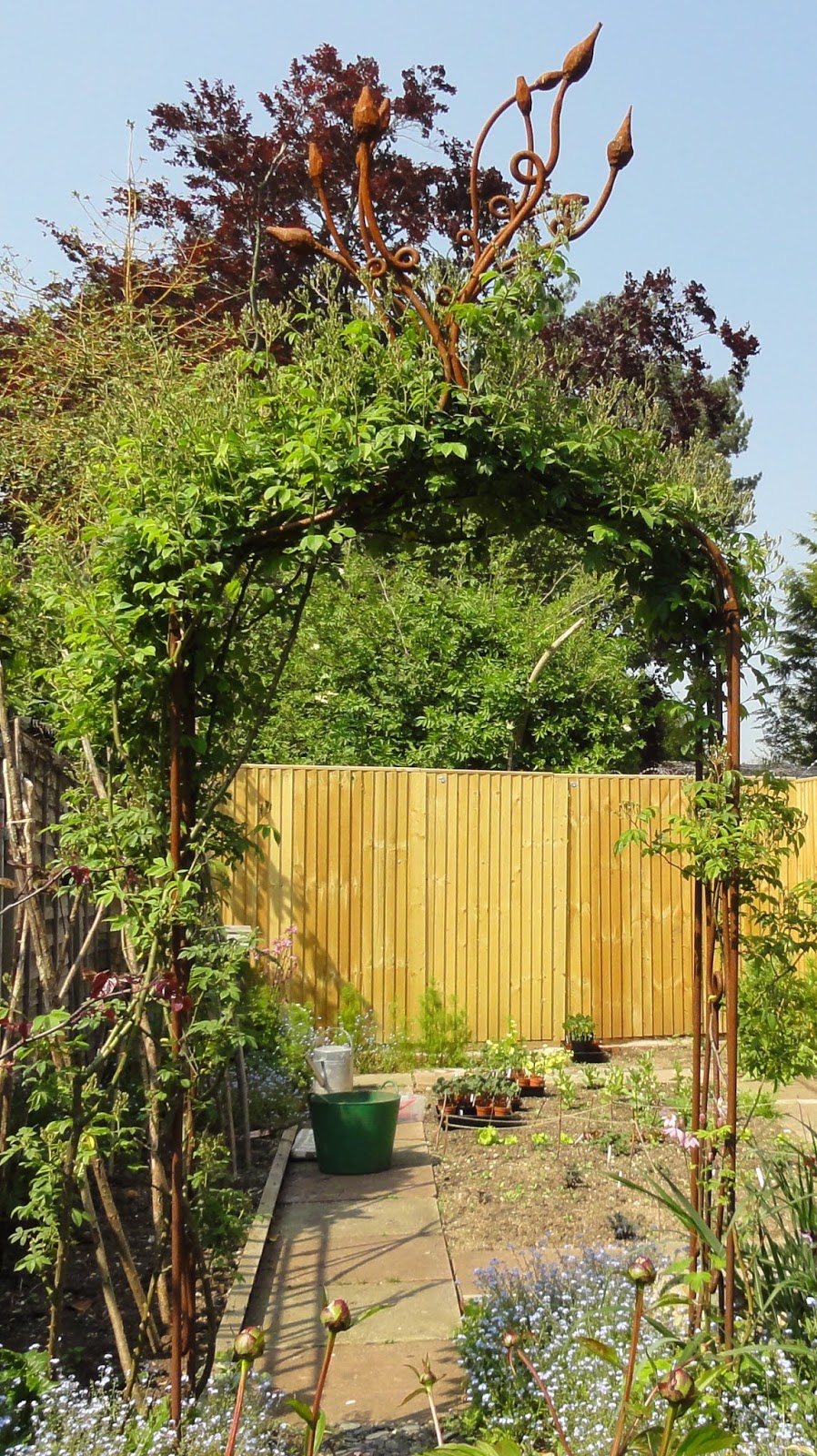 Plants can, of course, remind us of people. I’m rather fond of receiving garden gift vouchers as they allow me the opportunity to purchase some much sought-after plants. My friend Kate Kilpatrick gave me some vouchers as a 40th birthday gift (2007). I had also been given a much-coveted arch (see left, picture from my Oxford garden) by my partner Kevin and his mother Audrey, also for my 40th birthday, and it was wanting a climber to to take advantage of it’s height. When Kate gave me the vouchers, I knew exactly what I wanted.

Back in 2006, at a visit to Chelsea Flower Show (the NZ garden), I came across climber/rambler Rosa Seagull. It was beautifully fragrant and stopped me in my tracks. After a chat to the designer of the garden who relayed that it was trouble free and didn’t have much problem with black spot, I decided I had finally found a rose for me.

Thanks to Kate’s gift I was able to purchase the rose climber I wanted to go up the arch that I loved. Serendipity. Rosa Seagull flowers quite profusely and usually flowers early summer and then a second time late summer/early autumn. I realise I don’t have a photograph of it in flower up my arch, I think because the fragrance so takes me away I forget to get out the camera! Each time it flowers, I am reminded of my friend Kate, whose gift made it possible, and it makes me smile and drink it in. 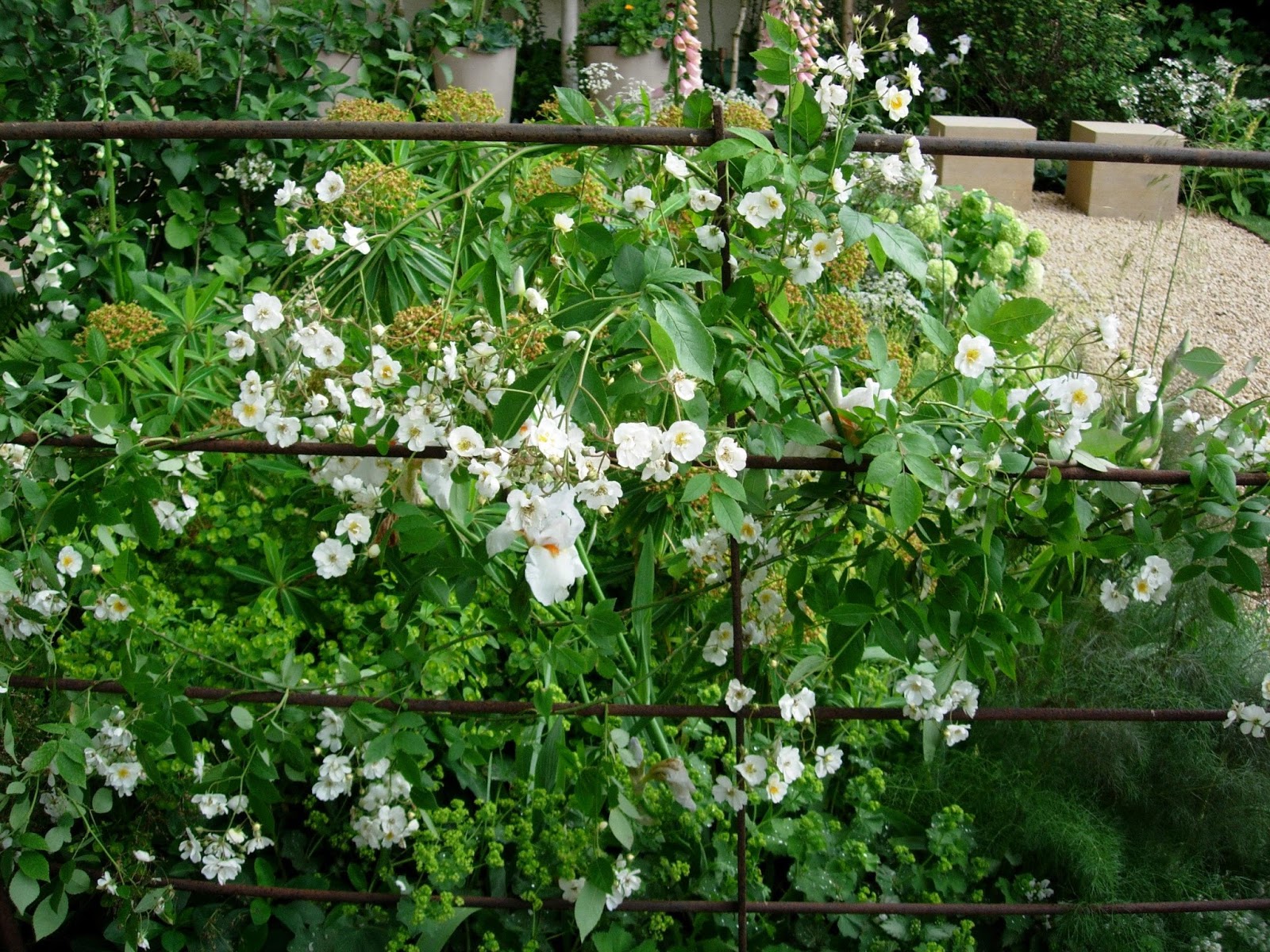 The arch and Rosa Seagull has moved with me, first from Witney to Oxford and then last year to our current home in Sheffield. The arch and the rose is looking good. I’ll be remembering Kate again this summer.

I have many other plants in my garden that contain memories. Like a cutting of a cutting of the first plant I brought when I moved to the UK, a St John’s Wort. I see it’s yellow flowers and am immediately reminded of chasing bumblebees around the gardens at Lanhydrock in Cornwall. It was mid-Spring, and Kevin and I were over-excited to see so many bumblebees; we don’t have them (or at least didn’t when we were growing up) in Australia, and had only ever seen cartoon pictures of them, and here they were in real life! Many of them were on the bright yellow St John’s Wort flowers and it prompted me to purchase my first plant. It was just the beginning my my plant and gardening addiction. 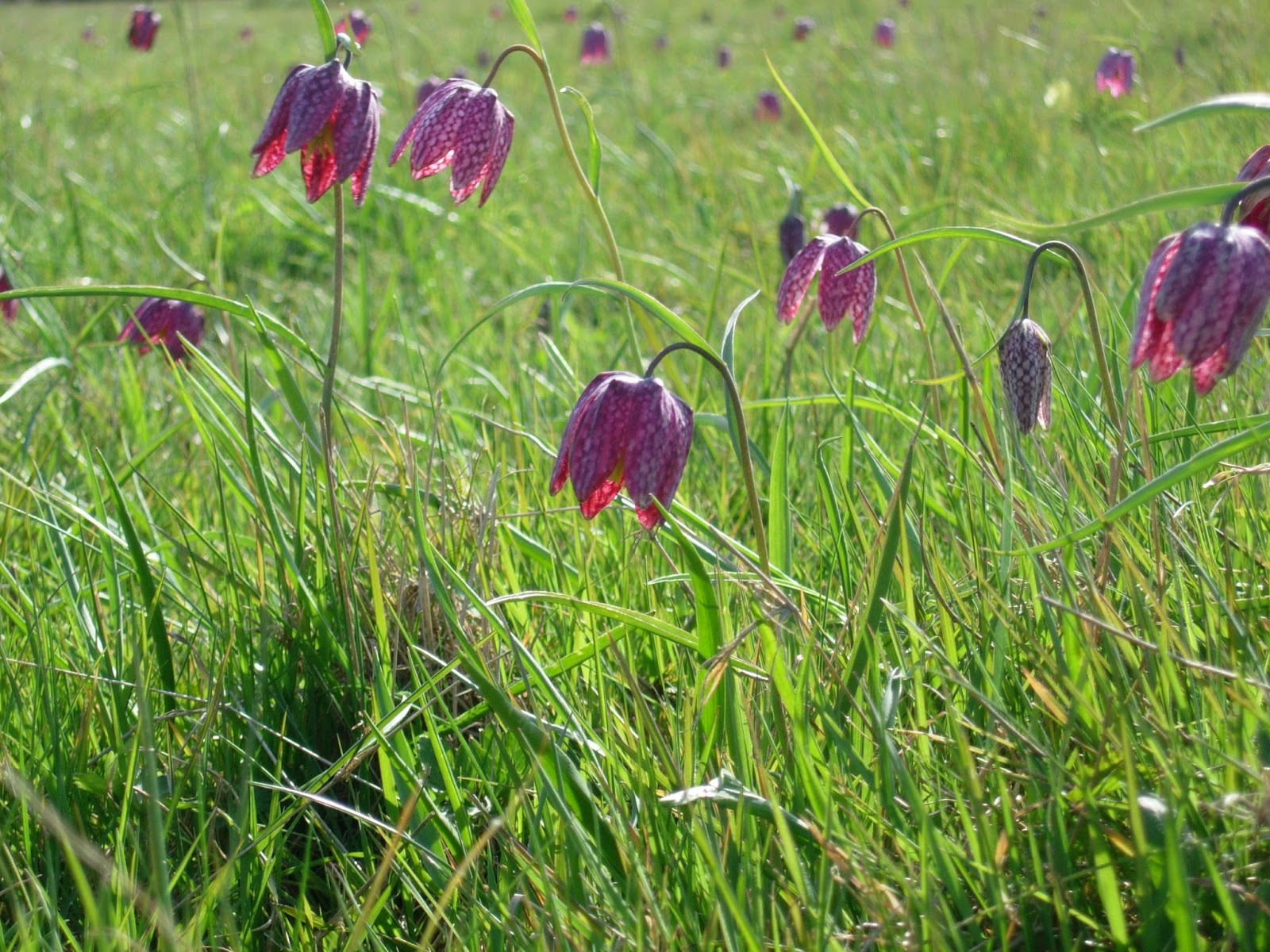 And there are other memories, such as Pulmonaria Blue Ensign that I first saw at Beth Chatto’s garden one Spring, visiting with Audrey. The deep blue flowers shone surprisingly brightly in the woodland garden. Here I learnt the delights that a shady garden can give you, that ‘full-sun’ wasn’t the be-all and end-all of plant growing. And I’ve recent planted many bulbs of Fritillaria Meleagris, Oxfordshire’s county flower, delicate and refined, and reminding me of many a visit to Iffley Meadows to enjoy the sea of snakes heads as far as the eye could see.

With our move from Oxford to Sheffield, plants, people, places and gift vouchers came together in what I hope will be, a most fruitful way.

Upon leaving both jobs and Oxford, I was given quite a few garden gift vouchers. Lucky me! My new garden was smaller and almost a blank canvas and I decided that if I was going to have trees it in, I wanted them to have a food producing yield, alongside their environmental and ascetic qualities. I knew exactly which fruit trees I wanted. Below is a photograph of my newly planted beauties and a description of the people and places contained within the memory of each one. 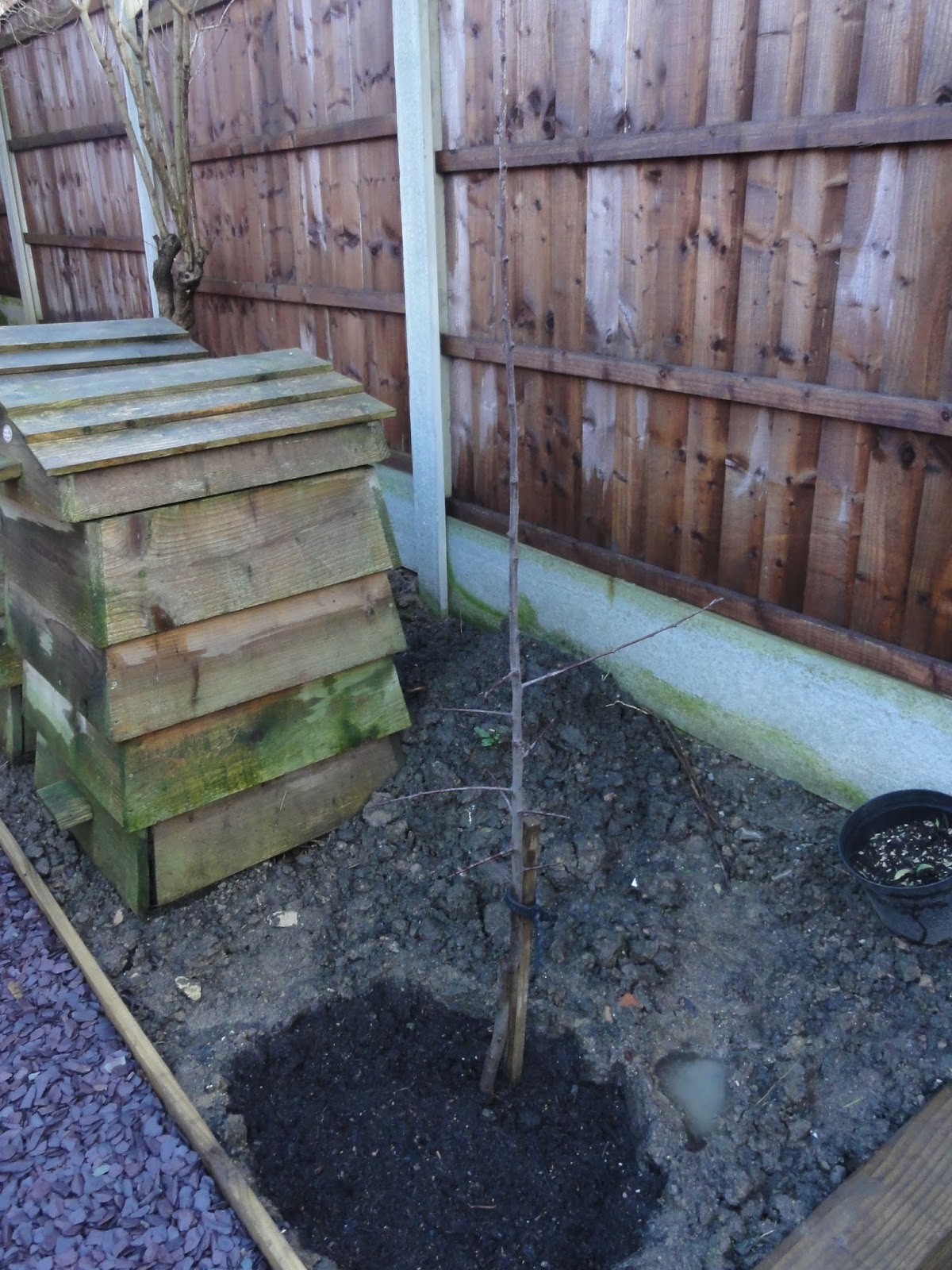 I first came across Greengage jam when visiting the Dower House Garden in August 2010. Taking a tea break we were offered scones by the garden maker and author of The Morville Hours, Katharine Swift. On offer to accompany the scones was a variety of homemade jams, including greengage jam. I had only recently discovered and was in love with damson jam, so I thought it would be fun to try another new jam. Woah! It was incredible and I was utterly hooked. I knew immediately I wanted to be able to grow a greengage and make my own jam one day. I finally planted that dream thanks to vouchers from my colleagues at Low Carbon Hub, where I finished as book-keeper not long before leaving Oxford. I loved working at the Hub and my new tree will be a memory of them and the inspiring work they do working towards a low carbon future across Oxfordshire. 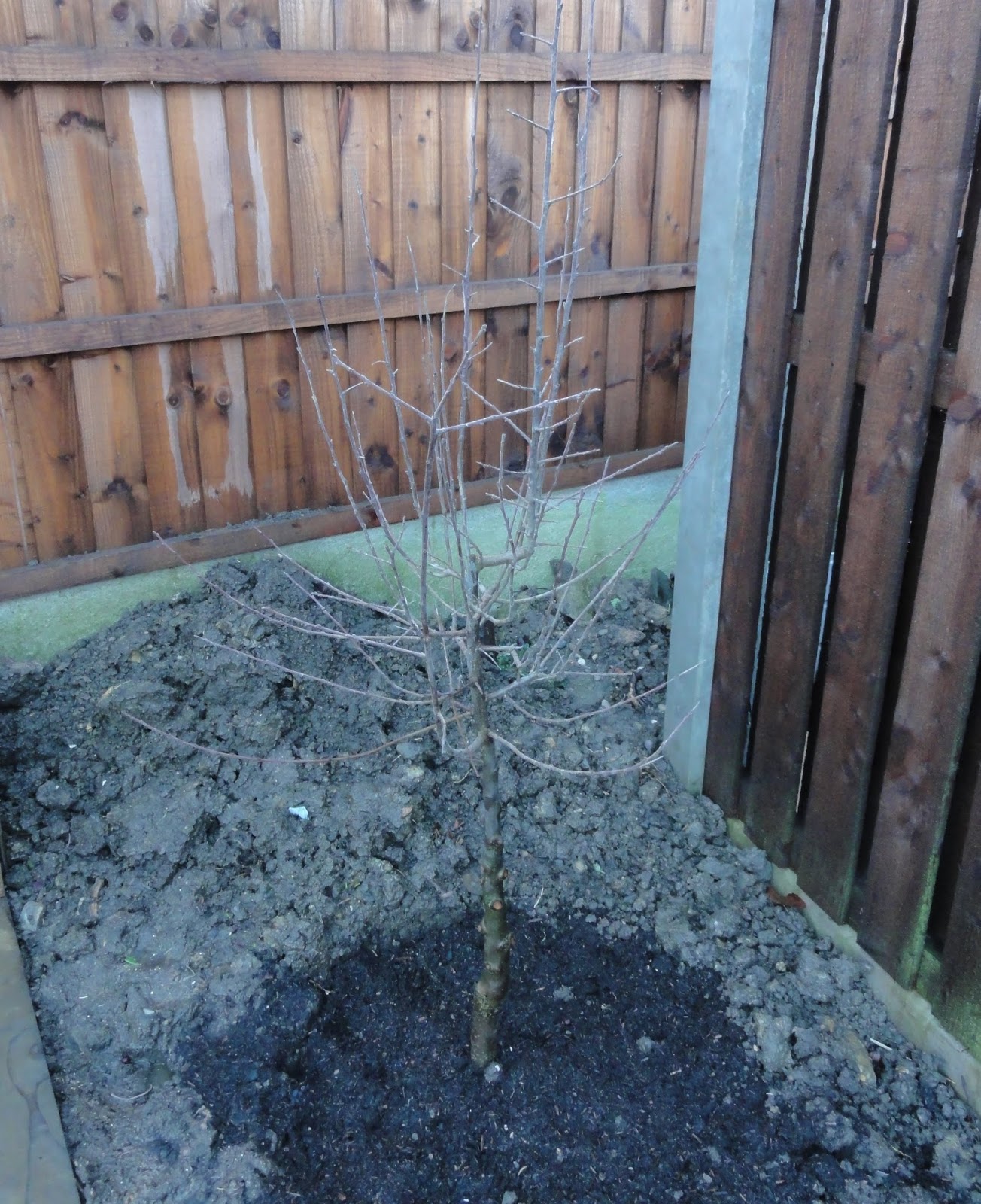 As mentioned above, I discovered damson jam not long before discovering greengage jam. Oddly, I cannot recall where I first tasted damson jam, but I did plant a tree, the same variety, Shropshire Prune, in my Oxford garden. And when I got my first crop, well…. I didn’t make jam. Turns out the damsons didn’t get more than foot from the tree before they were in my mouth. I recall squealing in delight at the flavour and yelling out to Kevin to come and try some before I ate them all. He did get a couple… The tree was nicely established by the time we were leaving Oxford so I decided, sadly, that I shouldn’t dig it up and move it. Thankfully, Audrey came to the rescue and gave me vouchers for my 2012 birthday, and voila, they turned into a new damson tree in my Sheffield garden. Magic. 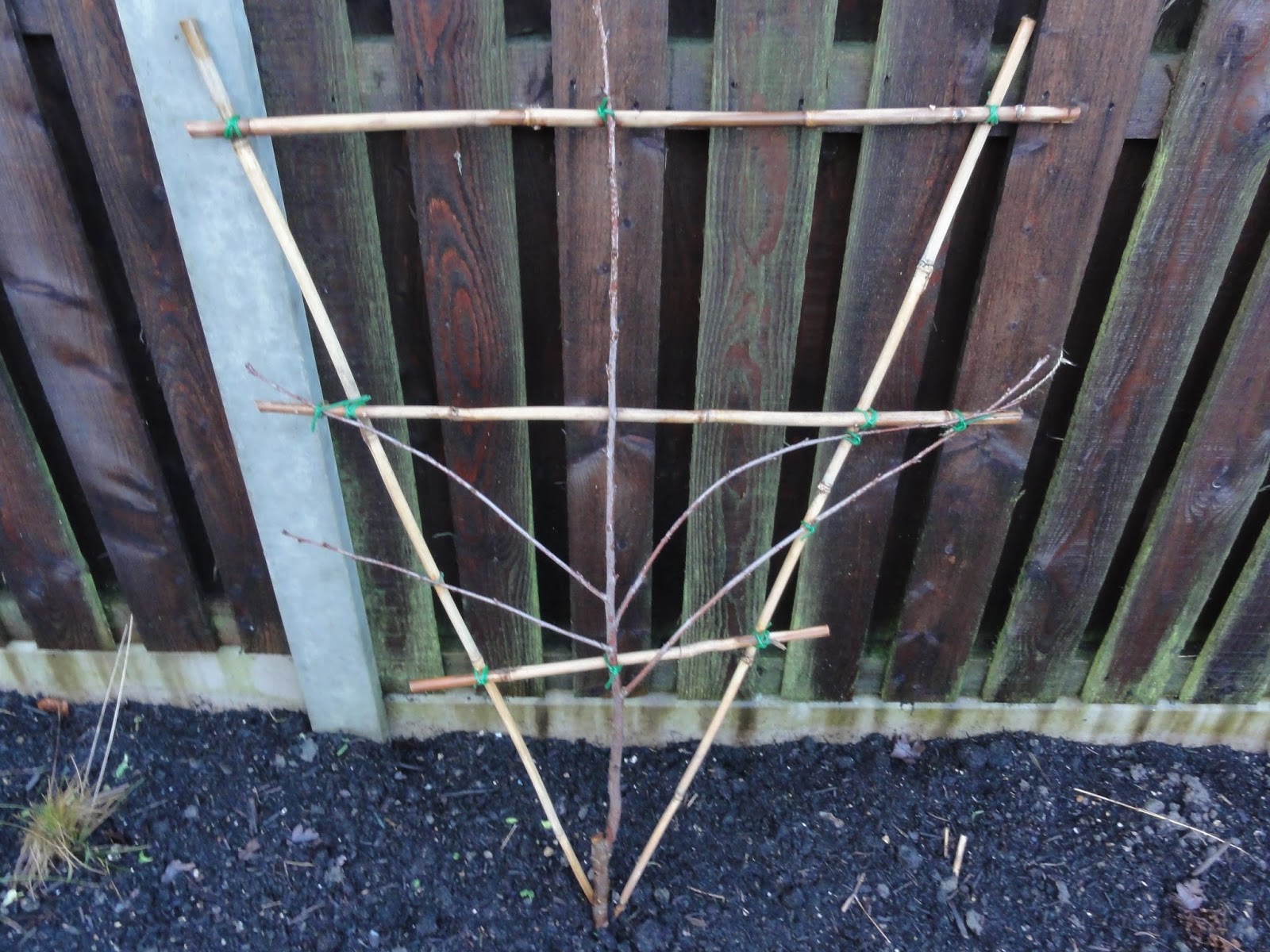 Morello Cherry makes me think of blackbirds. Naughty naughty blackbirds that stole my crop last year. The little buggers would pick the cherries from the tree then sit on the paved brick area in front of my kitchen window and poke their beaks at me before downing my cherries. I’d run out to chase them off but they had stripped the tree in no time. Netting. Netting is very important – I know that now.

I’m not particularly interested in normal cherries (sweet ones) so when I inherited the tree in my Oxford garden from the previous owners, I hadn’t thought about collecting the fruit. My friend Jackie did (this was the year before the blackbirds discovered the tree), and took away the whole crop, returning a couple of weeks later with a jar of sour cherry jam for me to try. Bloody hell – I gave away all those cherries – what an idiot! Because of course, Morello cherry jam is divine. Another fruit tree I decided was a must have in my new garden.

And you guessed it, more garden vouchers. I campaigned with Margaret Walker and many others for several years in order to make Witney a Fair Trade town. After several hard years of campaigning, running an annual fair trade market etc, we finally succeeded a couple of years after I left Witney, in 2011. Margaret and I also campaign together with Oxford WDM. Some how the deep red cherries of the Morello tree suit a memory of someone involve in social and economic justice campaigns, being, you know, red! 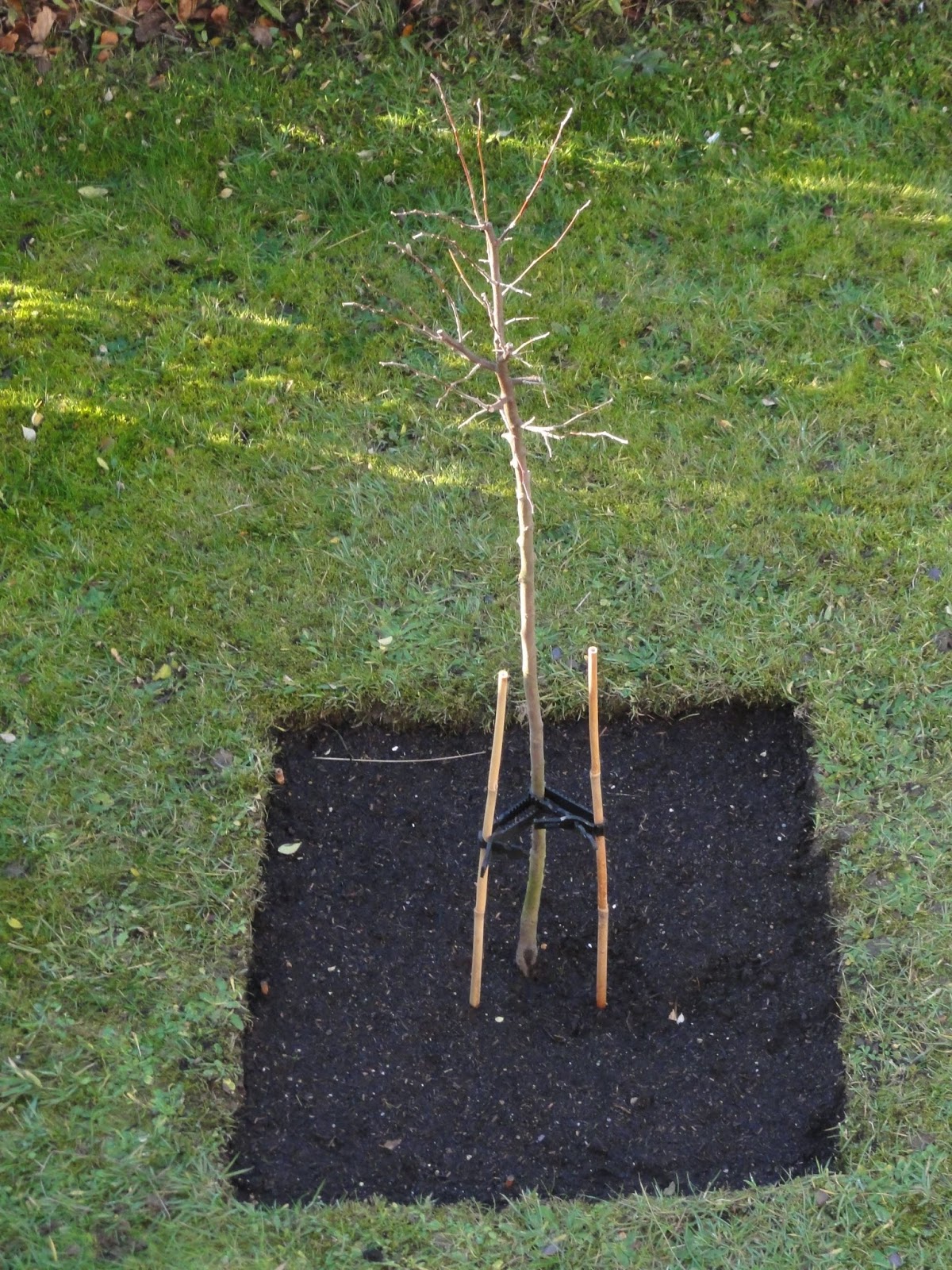 Cydonia oblonga ‘Serbian’, Quince
A memory of my colleagues & the community at Barracks Lane Community Garden

My final set of vouchers gave me the gift of a Quince tree. I was the Garden Coordinator at Barracks Lane Community Garden in Oxford from March 2010 to July 2012. It was a busy and varied role, doing everything from organising ‘local food’ events and running gardening workshops, to taking bookings and answering questions about the history of the garden. The space the garden now inhabits was transformed by the efforts of many local people, from a dangerous toxic waste-filled old garage site into a beautiful garden space that is used by the whole community. Amongst many of the plants flowering where there was once dirty car oil and used syringes, was a quince tree.

I don’t think I’d even seen a quince tree before I became involved with the garden. The flowers have a lovely fragrance and the fruit produced are golden balls of sunshine. One of the Trustees, Annie Davy, decided one harvest festival that the fruit was ripe and made quince jelly from the fruit. And yes, I hadn’t had quince jelly before. There is a theme here isn’t there?! One mouthful of Annie’s quince jelly and you guessed it, I had to have my own quince tree!

I had intended on obtaining a quince tree that autumn, but life changed and we decided to move to Sheffield, so I held off using the vouchers until recently. Now I have my young quince tree. As you can see from above, it’s already catching the afternoon light of the winter sun. This is fitting as when I think of Barracks Lane Garden, I think of light, as well as laughter, and a community of wonderful kind people whose efforts have made an amazing difference.

For me, plants can contain memories of people and places, of my history and where it touches with theirs. Their fragrance, their flowers, their leaves, their fruit, evoke memories of many kind, interesting and caring people, as well as of places that have delighted and given inspiration. The memories of all will continue to grow in the plants of my small Sheffield garden. Thank you all, for your gifts.