Now that a majority of the boxes have been unpacked and we can now effectively cook in the kitchen, I thought it was time to introduce the new garden here in Sheffield… 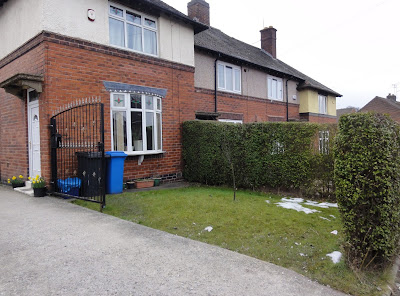 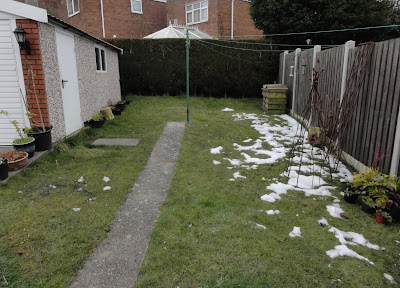 As you can see, they are almost a blank canvas. I’m very excited! 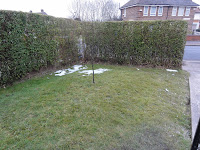 Front garden
The front garden is west-facing, so will get the late morning/lunchtime and afternoon/evening sun all year around. In the short term, i.e. over the next few months, the main change I will make is reducing the size of the hedge and removing the dead small tree in the middle of the lawn. Whilst the hedge does give some privacy, it’s actually too tall and also, frankly, boring. And apart from the fact that a square lawn is yawningly boring, I also see that it could be a useful growing space for a mix of edibles and perennials. And I also need to find a way of dealing with the rubbish and recycling bins, a design that is both functional and attractive.

I have some ideas of how I might develop the space. One is to remove the hedge altogether and putting in some step-over apple espaliers in its place. This would retain the structure of the border between the street and neighbours house, but also give flowers for bees, fruit for eating, and allow plenty of light in all year around.

I could build some raised beds to create borders and to help define the space. I have a vague idea of using a mix of perennials, for permanent structure, plus vegetables to make the most of the warmer afternoon sun. And the front of the house is clearly useful for growing vertically, though I do have a desire to plant a wisteria to grow up it for the beauty and scent, and a place that once developed, that birdies might nest in!

Like my front garden in Oxford, I want to continue with the idea of having a front garden that is attractive and at least partially edible. 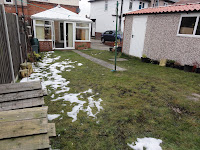 Back garden
This has an east-facing aspect towards the house, but the side of the garage is south-facing. The side next to the neighbours fence is going to be shadier all year around.

The garage itself has lots of potential. For a start, we are hoping to do a partial conversion, taking out the current south-facing wall and putting in a glass wall. This will make the garage, which will also be my shed, immediately lighter, and importantly, act as a greenhouse space as well. The garage roof is large and not overshadowed, so should be great for rainwater collection. The space behind the garage will take quite a decent sized rainwater tank.

I’m also thinking that building cold frames alongside the south-facing (glass) wall will also be a way of maximising the sun the garden gets. Because shade from the neighbours fence will reach to the middle of the garden in Spring and Autumn, and probably a quarter of it in the summer months (I’ll need to observe this carefully over the coming months), I need to make the most of the area that is south-facing. I’m thinking cold frames. Adaptable cold frames where I can remove the lids during the warm summer months, (maybe to sit behind the frames against the glass wall of the ‘greenhouse’, so the where to store the lids problem is also solved) but have them on during late Autumn and Winter, and as a space to start of seedlings in early Spring. 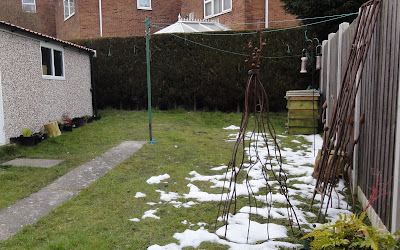 The ‘elephant in the garden’ is the Leylandii hedge. No fear, that’s on my side of the fence (I wouldn’t have bought the house if it wasn’t) and it is coming out. In fact, coming out right now (a post about that another day)! I’ve already found a tree guy to take them all out – 15 trees in all. Leylandii are awful for so many reasons, anti-social, or lots of work so they aren’t anti-social, they block out light utterly, nothing grows under them. And they are hideous. Before we put in an offer on the house I read up on how to return nutrition and health to the soil post-Leylandii. Apparently sowing green manure once it’s all out will help the restoration process, along with adding compost. So the sooner I get them out the sooner the soil can start healing. And I have much nicer trees planned for that space. Fruit trees! Quince, greengage, damson… Still need to look into root stocks and varieties, but I have plenty of time since the soil needs improving and fruit trees aren’t to go in until later autumn.

The shadier fence side might be good for ‘woodland’ plants, as well as being a place for the compost bins, plus being north-facing, maybe a Morello Cherry?! I also need to think about plants for bees and other insects, and how to also make the gardens attractive to birds and other wildlife. The awful clothes line will go (why don’t people put in retractable clothes lines?!) And to make sure there are places in which I can sit and relax, with a book or friends.

And then there is the front of the garage. All that concrete! Yet it also is a great potential growing space whilst also being a way to easily access the garage/greenhouse with our bicycles. We are thinking of bricking it up and putting in a wide door, since we don’t need it as a garage. We don’t have a car and even if we did, the inside garage space is too important as a gardening shed to let a car in it! And bricking it up would give more vertical wall space that could have plants growing up it.

So where next?
This is all very vague at this stage. Before I get too carried away with jumping in and designing, I need to go back to Permaculture basics. So the first act, other than getting rid of the Leylandii at the back and reducing the height of the hedge at the front, is to undertake observation of the gardens over the coming months. How the light moves across them, where the frost pockets are, how the changing levels effect drainage; there is a slope in the back garden that means it is higher at the back and lower next to the conservatory/house, etc. Where will be the best place for the bird feeders, hedgehog boxes etc (zone 5)? I also need to do a base map of the whole outdoor space (front, side and back) so I have practical plans and measurements from which the designing process can be based and built upon. 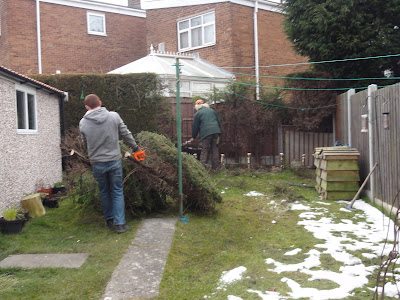 The Leylandii is already on it’s way out…

In the short-term, because I cannot bare NOT growing, I’m going to grow at least salads, strawberries, and some other veg and flowers in pots. I can also use the vegetables and flowers in pots to move them around the garden to see how the light and changing seasons effect the growing of the same plant in different spaces.

These are smaller gardens than the ones I had in Oxford, and for the time being, I won’t be getting an allotment. I’m actually quite excited by this though, as the challenge is to see how I can grow food, flowers and a have a place for wildlife, within a, I think, typically sized urban garden. And of course, to make it an attractive and welcoming space for all of us: Kevin, Merlyn, friends, food, flowers, wildlife, and I.

Welcome to my Sheffield garden.

1 thought on “The new garden: a blank canvas”