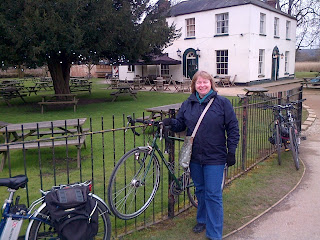 After living in Oxford for c. 15 years, we will be leaving for Sheffield, Yorkshire on Monday. We are planning to go to our favourite Oxford pub one last time tomorrow, and this caused me to reflect in general, on my favourite Oxford places. Here are a few of them. There is a bias towards East Oxford/Cowley/Iffley given this is the area in which I lived.

East Ward Allotment Association: where I  had my lottie for the last few years before leaving. The largest allotment site in Oxford and has a great little shop open on Sunday’s (except August) for an hour or so where gardeners can pick up seeds, compost and other key garden items, often cheaper than at gardening centres. If you aren’t a member of the lottie site, you can become an associate member for the shocking price of 10p per year(!!!) and take advantage of the lower prices. On the edge of the site is the lovely Boundary Brook Nature Park.

Isis Farmhouse: my favourite pub in Oxford. I hope I’m not spoiling things by mentioning it here. One of the reasons I love it is because it’s a great pub but one for locals, not the thousands of tourists that crawl over Oxford every day. It sits by Iffley Lock on the Thames towpath and is only accessible by walking, bicycle or canal boat. Outside in the sun, with the river and the Iffley meadows and birds and sounds of locals laughing, it is absolutely perfect. And when it is raining it is cosy and warm inside. Perhaps the best thing is the amazing home made cakes. Always just fresh out of the oven, they have spoilt me forever as I had my first ever Bakewell Tart at the Isis and it was so amazingly good that nothing else has ever compared. It’s a little rough around the edges, which is of course it’s charm. I’ve often caught up with friends and fellow Oxon activists there, held a pub quiz with Oxford WDM there, and sometimes just sat in the sun with a drink and a book. It’s just the best.

Rusty Bicycle: Since opening about 3 years ago,we have regularly met friends & had a drink at the Rusty Bicycle. It’s hard to beat the Isis Farmhouse on setting (by the river etc), but the Rusty Bicycle is a very close 2nd favourite. It’s convenient to Iffley/Cowley Roads, has a warm atmosphere, friendly staff and some lovely food to snack on. I particularly like the cheesy-rosemary chips, and the dips with pitta bread. They now also host the Cultivate Veg Van each Thursday, 4:30pm-7pm. A great local pub.

Magdalen Arms: This one is a bit of a trendy food pub, but it gets top points for being incredibly child-friendly, even on busy Friday and Saturday nights. It’s often our first choice if we want to go out to dinner with friends who have children because of this; they even have games and books children can borrow to play with. The food is very meat-based, so not great for veggies, but it is very good, local sourced food and I’ve always come away deeply satisfied with the food and company.

Iffley Meadows -fritillaries: this is an ancient wet meadow just behind the Isis Farmhouse and Thames towpath at Iffley. For a few weeks every year (mid-April, but depends on the weather), the meadow is full of native snake’s head fritillaries. Delightful to wander through and to get up close to one of the prettiest native flowers in the UK.

Oxford Botanic Garden: a lovely oasis in the middle of a crowded touristed city. Small but beautifully formed, sitting by the Cherwell, the other main river in Oxford, and with views to the lovely Magdalen College tower. I sometimes just popped in at lunchtime to get some peace and colour in my busy day, and other times took visitors there to enjoy the blooms and the classic Oxford views.

Barracks Lane Community Garden: a bit of favouritism here, since I worked for the garden for a couple of years… That aside, it’s an incredibly inspiring story and space of how local people turned a damaged polluted space into a beautiful garden in the middle of the busy East Oxford community. The garden is open every weekend from March to October, is free, and runs lots of great events for people of all ages. Sitting in the garden, listening to the birds, laughter and communal chatting, one can feel like another, better world, really is possible.

Oxford Permaculture Group: meets the 1st Saturday of each month at Barracks Lane Community Garden. A lovely bunch of people who do practical permaculture projects both at the community garden and together with other local organisations, run courses/worshops, talks, film nights etc. I met and made good friends with this group and will really miss their company and activities.

Cowley Road: from The Plain up to Magdalen Road, Cowley Road offers a wide-range of cuisine, eclectic shops, including The People’s Supermarket and UhuruWholefoods, campaigning activists and a funky street scene. Not yet taken over by Clone Town Britain, let’s hope it stays that way. It hosts the Cowley Road Carnival each July, as well as the wonderful Restore garden and cafe.

Thames towpath, Donnington Bridge to Folly Bridge: An alternative way of walking or cycling into town. Walking from Don Bridge (as we call it), as you get closer into town you start to see some of the ‘dreaming spires’. I once saw a deer jump into the river at Don Bridge and swim halfway across, before being startled to see me watching and and swiming back to the other side! This is a shared walking and cycling path, so respect and be nice to each other.

Oxford walk: whenever I have visitors they inevitably wish to know of a good walk around Oxford centre, taking in the colleges, university and streets. Oxford is a bit of a nightmare to walk around, to be honest, particularly on Saturdays, because it gets such a large number of tourists. This can make it difficult to enjoy Oxford because you are constantly fighting with the crowds. This is the route of my favourite walk. It’s not tourist free – that’s impossible in Oxford – but it’s reasonably relaxed and takes in some key Oxford sights. Download my suggested walk.

Oxford Castle – for Empress Matilda: for history buffs – Empress Matilda, who should have been Queen of England but had her throne nicked by the evil Stephen (you can see my biases…), made an amazing escape from Oxford Castle in 1141. You can climb the tower that Matilda escaped from, and also get great views of Oxford. In my view, Oxford Castle Unlocked, who run the ‘attraction’, don’t make near enough of Matilda’s escape, so you should read Sharon Penman’s When Christ and his Saints Slept first, then visit the castle, to really get a feel for it. There are other reasons for visiting Oxford Castle, but I only care about Matilda!

East Oxford Farmers Market: kind of obvious. It’s a farmers market, it has lots of locally sourced yummy food and is friendly. It was a finalist in BBC Radio 4 Food and Farming Awards in 2011 and for good reason. A great selection of local foods, from Oxford Sourdough and Saffron buns to samosas and pakoras. Plus fresh veg from Sandy Lane Farm, jams, apple juice, cakes, and even someone who sows and repairs clothing. On top of that, a lovely little cafe where you get simple good food at a good price. I’m really going to miss the East Oxford Farmers market. I always ran into a couple of people I knew, it has such a lovely vibe and was a essential part of local life

Cultivate Veg Van: have to admit to another bias here since put a small investment in Cultivate when it opened it’s share offer to the local community. What they don’t grow themselves, they source from other local suppliers. The van visits several places in and around Oxford each week, from the train station on Friday evenings to the South Oxford Farmers Market on Sunday mornings. Run by an inspiring bunch of young people as a social enterprise, it aims to being good locally sourced food at an affordable price to Oxon residents.

The Plough, Wolvercote: Whilst tourists go to The Trout in Lower Wolvercote, by the river and next to Godstow Abbey, locals go to the Plough. Yes The Trout is in a lovely setting, but if you are lucky enough to get a table you then can wait for up to 1.5 hours to get your food, that isn’t that cheap and isn’t that special. The Plough is a comfortable pub in Upper Wolvercote with yummy food and a calm relaxing atmosphere.

Port Meadow: this is a large common just on the edge of the city of Oxford (out Jericho way) and has been in existence for about 1000 years. In return for helping to defend the kingdom against the marauding Danes, the Freemen of Oxford were given the 120ha of pasture next to the Thames by King Alfred who founded the City in the 10th Century (cited from Oxford City Council website). It can often get flooded, so the best time to visit is in the Summer. A lovely natural space not far from the busy Oxford streets, but where you are in another world close to nature and light.

Jericho: just outside of central Oxford, Jericho use to be the slum area but of course now is very well-to-do and has a range of restaurants including Ramond Blanc’s Petit Blanc, the great Phoenix Picturehouse (which offers cinema beyond Hollywood), the Clarendon Street cafe’s and shops, the grand Oxford University Press entrance.

Ashmolean: first ever museum and holds the lovely Alfred Jewel. Great collection and free, a great way to spend a morning or afternoon. Recently refurbished and now has amazing architecture inside and a great restaurant at the top. Thanks to @wellywomanblog for reminding me!

This has been my Oxford. It won’t cover everything that tourists might want to see, it’s a personal list of favourite places and the people in them that I’ll miss. And who I will return to and enjoy whenever I’m visiting Oxford in the future.

3 thoughts on “Oxford, my Oxford”