I never fail to get excited about the arrival of the next years Heritage Seed Library (HSL) catalogue. So many choices of wonderful sounding veg, often with great stories behind them. I’ve been a member for quite a few years now and have even started sending back some seed, such as my favourite pea ‘Lativan’, which I have written about in the past.

There are several vegetable varieties from HSL that are now favourites at Gwenfar’s Lottie. Besides my Lativan Pea, this also includes the Estonian Yellow Mini Cherry, pictured below. 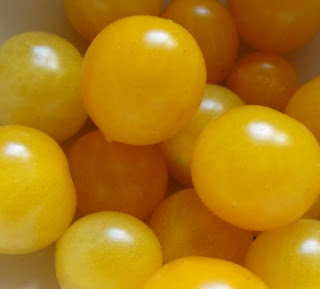 This is incredibly prolific, something like 80-100 little cherry tomatoes on a branch and lots of branches. It also showed some blight resistance, in that when blight hit, not all of the Estonian toms were hit, and even if they were, they kept growing and fruiting anyway. I gave away quite a few batches of these, froze some, and of course ate quite a lot. They are incredibly sweet, just like eating sweets, and with the wonderful colour to go with them. Bursts of sunshine in your mouth!

Another favourite is Lettuce ‘Bronze Arrow‘, and I’ve met a lot of people at least in Oxford who also love this variety. It’s very reliable, has a slightly nutty flavour and is slower to bolt than many lettuces I’ve tried. I have saved seeds from it this year and will be sowing lots come 2012. 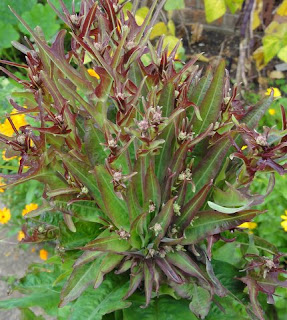 Other favourite HSL varieties include Kale ‘Hungry Gap‘ and another Pea, ‘Robinson’, which I’ve also written about previously.

My HSL catalogue for 2012 arrived last week. Like a child in a sweet shop I poured over the varieties on each page, getting excited by such a wonderful range of seeds on offer. As a member you can choose up to 6 varieties, and these are my choices for 2012.

Kale ‘Daubenton’: dating back to Victorian times, this is apparently a perennial kale and can be treated as a cut and come again veg. I’ve been thinking about growing more perennial veg in my front garden, to give it a bit more structure as well as an ongoing food crop (I grow a mix of perennial flowers, annual veg, fruit and herbs in the front garden). So this one hit the top of the list.

Brussels Sprouts ‘Catskill’: coming from the US, it is meant to be robust and be good for both eating fresh and for freezing. I have not tried heritage Brussels before, so thought I’d give it a go.

Broad Bean ‘Martock’: I couldn’t resist this one, it’s key attraction being that it was a mainstay of the medieval diet – that’s some history! Grown in Somerset for centuries, it was donated to HSL in 1970’s after the beans were offered to someone in exchange for a donation to the Bath & Wells cathedral roof restoration. Medieval bean, medieval cathedral – will it suit modern tastes?

Broad Bean ‘Red Bristow’s’: as my friends know, I’ve got a bit of a thing for red and purple vegetables. I love purple/blue beans (see below), but they usually loose their colour once cooked. These broad beans are meant to stay red even when cooked, and have a delicious taste, so seemed like a good choice for palate and plate.

French Bean ‘Blue Coco’: I must admit, I just love the name and the fact that it is a purple/blue bean. Ok, I was also attracted by the fact that it is meant to be good in salads and be hardy, reliable and prolific. Oh, and they have purple tinged leaves and lilac flowers. I think this might be another for the front garden.

Dwarf French Bean ‘Hutterite Soup’: a variety coming from an Austrian religious sect that moved to Canada in the 1750’s. I’m more interested in beans for drying to use in winter for soups and stews and this one is meant to be perfect for precisely that reason.

So those are my heritage veg choices for 2012. As all gardeners know, at the end of the day, it doesn’t matter what it says on the packet, it is how it performs and tastes that really matters. Based on past experience growing heritage varieties, I suspect there will be at least a couple of tasty winners in this selection.