During our Dorset holiday, Kevin and I visited Abbotsbury Subtropical Gardens. It may seem like an odd thing to do in the middle of winter. However, I often find winter a great time to visit a garden to see the structure and appreciate some of the less obvious features that drown in Spring, Summer and Autumn’s floral displays.

As you can see from the view below, Abbotsbury gardens is nestled in between several hills. This gives it a specific microclimate that allows them to grow more exotic plants than can be grown just over the hill. 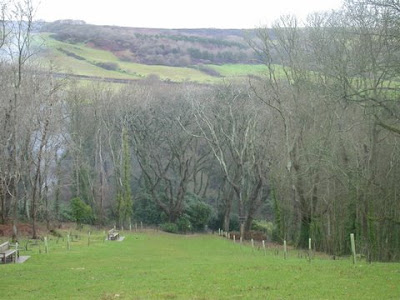 Looking down from the top of the Magnolia avenue

I don’t think my photo actually gives the view justice, as it was really quite lovely with all the naked trees and their twisting branches, and the hills in the background. 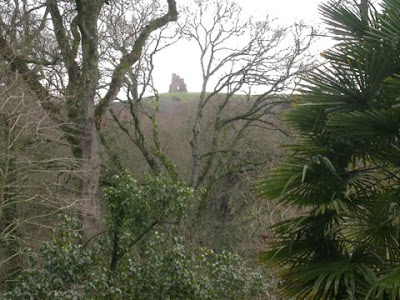 view of St Catherine’s Chapel from the gardens

As the picture above alludes, lush tropical palms are planted alongside Australian gum trees (eucalyptus) and English birch. Being the dead middle of winter, many plants had died back, such as the enormous Gunera, of which below you can see the orangey-brown remains. Leaving the dead foliage until spring helps protect the plant from frosts and heavy snow. 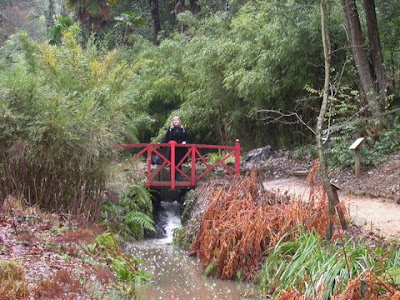 Julieanne on the bridge of the Bog Garden

Yet there was plenty of lush movement from the bamboo, that even in the middle of winter gave you a hint of the subtropical delights that would be found once spring would emerge. 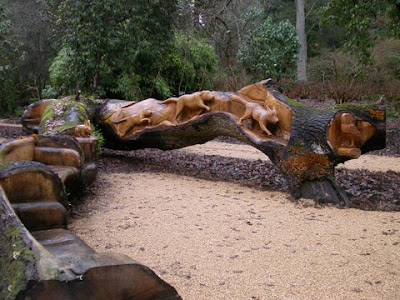 One of my favourite ‘discoveries’ was this lovely tree trunk, sculptured with animals and seating places. On it, grew this beautiful orange fungus (below) amongst the wood and moss. I love that rather than just chopping it all up, it was turned in to something both beautiful and functional, and that also had created another habitat. 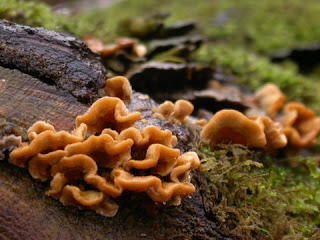 Abbotsbury is not necessarily a winter garden, and they did not have much in the way of bulbs or early flowering shrubs to give it ‘interest’ and colour. I will definitely return sometime to visit in late spring/early summer, when growth will have exploded and you would feel more like you are in a subtropical garden. However, I’m glad I visited in winter. Kevin and I pretty much had the place to ourselves and it was lovely wandering around and enjoying these quieter beauty’s.