Ugh. It’s been an age since I’ve blogged. I did start the year promising myself that I’d try to blog at least once per week. How quickly that promise was broken! Somehow January got away from me and good grief Charlie Brown, it’s already February. So here is a quick catch up, in particular, about our short holiday to Dorset.

Kevin and I finally got over our respective bugs in time to be able to go on our short break to Dorset mid-Jan. We had a very relaxing time staying in a cottage a couple of miles away from the coast. We visited places such as the Tolpuddle Martyrs Museum, Chesil beach and Abbotsbury Sub-Tropical gardens. I’ll write about Abbotsbury in a separate blog.

On our way down we stopped at Shaftsbury for a few hours. It has a particularly lovely ye olde quaint cobble-stone bit: 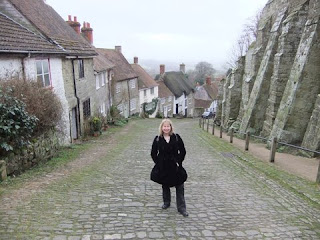 Visiting Tolpuddle, what I found most interesting, or is it depressing(?) about the story is that how many issues the martyrs faced that we still face today. Ok, we don’t get transported to Australia for 7 years for being in a union these days. (I wonder if Australian unionists were threatened with being transported to England?!) But workers have been facing increasing anti-union activity from the current and previous governments, as well as some companies bringing in US union-busters to dissuade workers from joining a union (Kettle Chips did this in 2007). True, in the UK we don’t (yet) have to fear being shot for being in a union, as Colombian workers have experienced. We only have to worry about the constant attack on our wages and conditions… Visiting Tolpuddle was a good reminder that solidarity and working together to defend our rights and working conditions is as important today as it was in 1834.

And fun. Where’s my foot gone?! 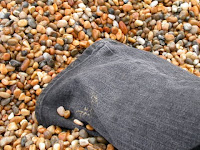 Did you know, if you run along Chesil beach, the pebbles make the most fantastic sound that sounds just like Cybermen marching? So cool. Also, really hard work. Running along pebbles is quite hard work and we quickly disabused ourselves of the idea of doing much of a walk along the beach. For every two steps forward you take a step back if you are going up the sides, and along the top the pebbles make every step drag. Chesil beach and the surrounding area was very beautiful, and it’s an amazing natural phenomena. Amazing, not in the least, because humans have managed not to screw it up… 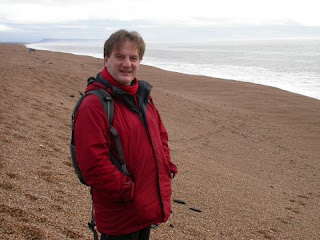 We managed a short visit to Lyme Regis. 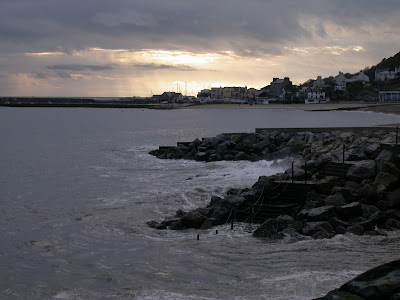 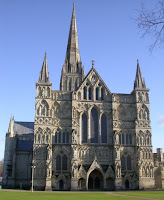 On our way home we stopped at Sailsbury to see the catherdral. It was one of the first places I saw when I first came to England in 1988 and I recalled being quite impressed by it. Before arriving, I wondered if I would still be impressed, having seen so many beautiful catherdrals and ruined monasteries since. No worry, it still was very impressive. 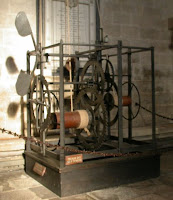 My favourite part of the catherdral was actually the amazing medieval clock (right). Made c.1386, it is one of the oldest clocks in the world. It certainly doesn’t look digital, or even clock tower like! In fact, you might find it hard to believe it is a clock. It worked with weights and balances and struck a bell on the hour. Apparently when working it’s time-keeping is still quite accurate. We wanted to see and hear it work but it turns out that they stop it from ringing it off as it would disturb church services. *sad face*

The Dorset countryside is very beautiful. Classic English chocolate box cottage in many parts. The view from our cottage was lovely.

Even in mid-winter, it’s moody and ethereal and it was a lovely place to zen out for a few days.

1 thought on “errant blogger finally returns to talk about holiday…”