Kevin and I got back from a week in Shropshire yesterday. Perhaps not an exotic holiday, but a lovely and relaxing one which was just what we needed. We did some walks nearby (see below), and hired a car for a couple of days so we could visit a couple of gardens that were hard to get to by public transport. These were the Dower House Garden of The Morville Hours fame (and a very strong reason for choosing Shropshire for our holiday this year), and Wollerton Old Hall Garden, both of which I’ll blog about separately.

We stayed in Ludlow, a pretty town with lots of historic buildings, some dating back to the 15th century, and the castle which dates to the Norman Conquest. A hilly town, because you build your castles on a hill, don’t you know, but well worth it. The photo below is of the market square. 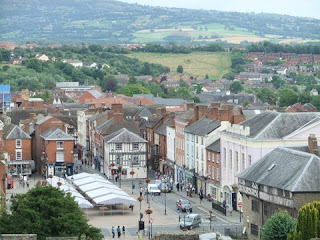 We took the opportunity of a guided walking tour so we could learn more about the history of Ludlow. The guide was clearly keen on architecture and buildings, and that was the main focus, rather than social history, which we prefer. However, it was engaging and one particularly interesting fact is that some of the ‘Georgian’ buildings you can see on the square, actually date to the medieval period. The owners, in an 18th century version of ‘keeping up with the Jones’s’, couldn’t afford to pull down their house and rebuild completely in the Georgian style as was the fashion of the time, so they just had the front refurbished to look Georgian, whilst inside the rest of the house remained medieval! 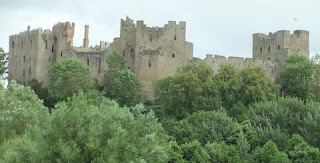 And of course, it has a castle which dates back to the Norman conquest. The ‘of course’ is you can trust a Gwenhwyfar to find a castle to play in on holidays if she can! 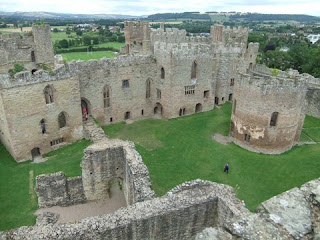 The first picture is a view of the castle from the river side, and the second below, from inside the castle. Unfortunately the castle isn’t being looked after by English Heritage who are pretty good at keeping castles and ruins in good repair, but is privately owned by some Duke or Earl dude with an eye on profit. It shows. Part of the castle has been closed off to the public and 21st century private accommodation added at a nice exclusive price, the cheapest being £480 for 3 nights. And what you can visit, isn’t very well looked after. There were trees, one at least over 5 ft, (sycamore I think) growing out of the top of some walls, the roots of which will destabilise the mortar and could lead to walls falling down. The remaining old iron-wood doors, must be about 15th century, are almost coming off their hinges, and pigeons are nesting and shitting all over the place. You have to be careful where you step. 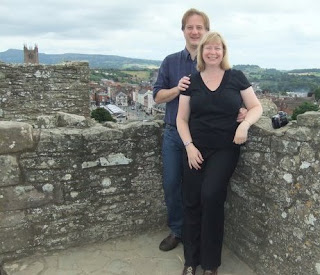 I think my pictures might make the castle look in better repair than it is!

One of the particular reasons for choosing Shropshire was to do some walking in the hills of South Shropshire. We walked from Church Stretton up to Caer Caradoc. This picture of Caer Caradoc (the hill to the right of the picture) was taken from the Long Mynd the following evening.

Not a long walk, about 6 miles for the round trip, but very, very, steep. Well worth the effort though. The views from Caer Caradoc were breathtaking. We could actually see as far away as Hay Bluff in the Black Mountains. It was a good place to view the Long Mynd (below, with Church Stretton in the valley) to the west, the Wrekin to the north, and Clee Hills to the south-east. 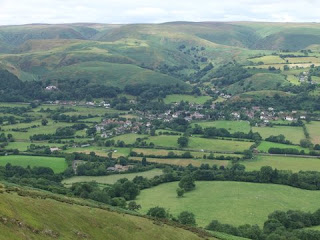 Here are some sheep pretending to be goats up on top of Caer Caradoc. 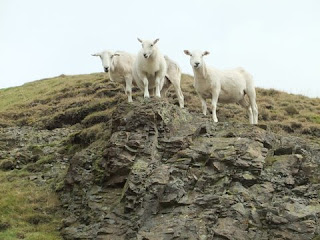 My photographs in no way do the view any justice. It was a hazy day, and frankly, I don’t think it is easy to capture the breadth of the views on camera. Or maybe I’m just not a good enough photographer?! I did manage to capture this Kestrel hovering, which I’m pleased with. 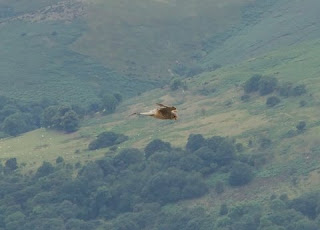 And here I am having a rest in the heather, just before we began the steep walk down. 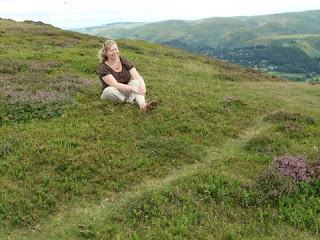 We slacked off a bit the next day, and took advantage of the hire car and drove rather than walked up Long Mynd. Again, more beautiful views of the Shropshire hills. I think my picture of the wild ponies on Long Mynd captures the sparse beauty of the hills, reminiscent of Dartmoor. And isn’t the foal cute! 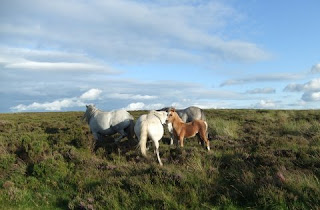 Other wildlife we saw on the holiday was a hare, too quick for me to photograph, and Red Kites. Yes, we have Red Kites flying over Oxford these days, but they are still amazing birds to see. 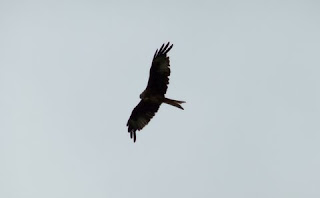 In Much Wenlock, I snapped this sign that we found amusing on the wall of the old telegraph office, reminding us that every age has its ‘hoodies’. 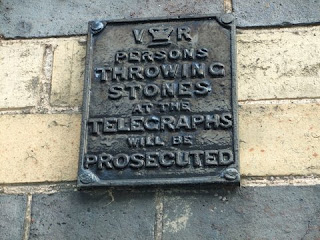 And for funniest village name of the trip, in the manner of Douglas Adam’s Meaning of Liff, Diddlebury. Kevin and I thought this sounded like the kind of word you might use to describe someone who is a bit absent minded and does silly things getting themselves further into a muddle. “What a diddlebury, I’ve just put the cat in the fridge and the milk outside the back door… Argh!!!”

The holiday hasn’t ended, we now have another week off at home, pottering about and maybe going for cycle rides. And blogging about our garden visits in Shropshire.