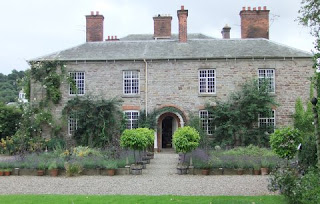 One of the reasons for choosing Shropshire for our holiday this year was in part inspired by the book: The Morville Hours, which I first read a year ago. The book, which is about the creation of the Dower House Garden at Morville, managed to encompass so much of what I love about England and my life here. The history, the landscape, our gardens and seasons, and how these things interconnect. The author, Katharine Swift, beautifully encapsulates all this within a journey of self-exploration about her own past.

The garden was created with different areas reflecting the people who lived at Morville over the centuries. So there is a Cloister Garden beautifully created in Yew to represent the old priory that was sold off in 1540 at the Dissolution of the Monasteries. 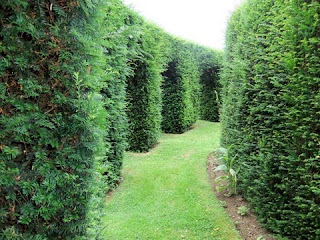 I loved the Elizabethan Knot Garden, created with herbs such as germander, sage, wild strawberries and lavender, rather than box. It’s cleverly placed near the house so the fragrances can be taken best advantage of during the summer when the windows and doors are open. I’ve been wondering how I might create something like this at home, or some elements of it, since I simply don’t have the room for a knot garden. I’m thinking perhaps more herbs near the front door, that guests can brush against when they visit. Mmmm. 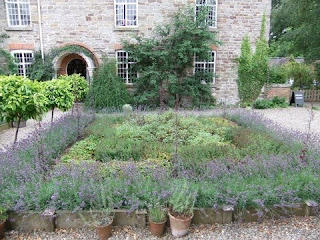 One surprise for me was the Canal Garden, representing the more formal tastes of the 18th century. To say I’m unenthusiastic about the 18th century landscape movement style of gardening would be an understatement. Frankly, I cannot stand it, it’s attempts to control nature and the willful destruction of villages and people’s lives, as happened nearby to me in Oxford, at Nuneham Courtenay. So I wasn’t really expecting to think much of this part of the Dower House Garden. 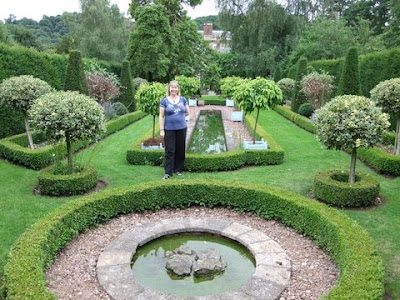 However, I was mistaken, it’s quite lovely. This is perhaps because it’s on a small scale, so not really landscape gardening. But also because Katharine has allowed nature to rebel, allowing plants such as one of my favourites, Verbena Bonariensis to self-seed itself where it wished, giving nature a say in the garden.

I’ve increasingly come to the realisation that when it comes to gardens, I tend to love the ones that incorporate food into the design. I guess I like bringing together both beauty and practicality (food!) in a garden. The Dower House Garden does this specifically with fruit, such as in the Vegetable Garden with it’s criss-crossed tunnels of pear and apple trees, though there are vegetables in the Vegetable Garden too! 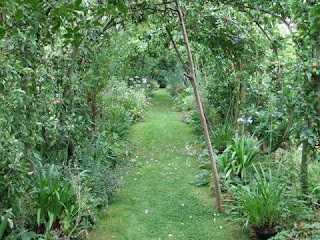 The pear tunnel, needing to be held up by stakes as it’s overloaded with fruit

There are a large number of varieties of English apples and French pears. I was delighted to see the apple Catshead. This was recommended to me a while ago by George, a friend of my friend Jackie, with whom I got into a long discussion about apple varieties and other vegetables at her last birthday dinner. Notable because I don’t often find someone I can talk to in such depth and at length, almost to the exclusion of all others, about such things! 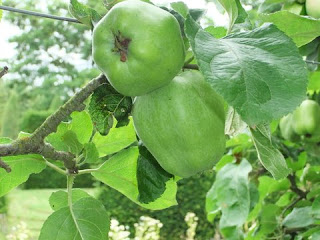 After George’s recommendation, which included that it has a very long storage life, up to March the following year and being good for eating and desserts (apple crumble!), and having finally seen the apple for myself, I’m now resolved to obtain a tree for myself, if I can find a place to put it. Although maybe I should try and find one to taste first, just to make sure?! It does look yummy…

I picked up an interesting trick on growing pear trees at the garden. I have planned on growing my pear trees in an espalier fashion. Katharine has done this, but with a slight twist. 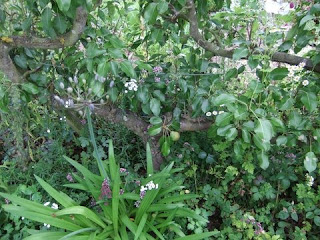 I don’t know if you can tell (I can, but I took the photo so know what I’m looking at!), but rather than a series of rows off from a central upright branch, these have been trained to curve around. This creates the appearance of several branches coming out from the centre, when in fact they are two long branches that have been trained to curve across, up and around repeatedly. It’s quite elegant I thought, and I like the style of the weaved branches.

A fun element in the garden was the Turf Maze. I learnt from the book that this is a unicursal maze, or labyrinth. This has just one path with winds around to the centre, unlike puzzle mazes where you can take various paths. 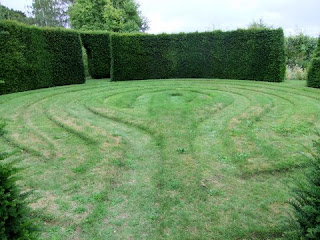 The nature of the turf maze leads you to follow the path around and I found once I got to the middle, rather than walk straight over the maze to my wait out, I felt compelled to walk back through the maze to the exit/entrance. I don’t know why, just felt like the thing to do. 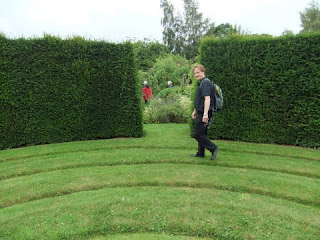 Kevin didn’t feel such a compulsion and once he got to the middle (you can see him above carefully following the maze through), he strode out across the maze to another part of the garden. I cannot decide if this is a gender thing, or laziness on his part…?!?!

I enjoyed visiting the Dower House Garden. Even though we were visiting at a time that Katharine described to me in an email enquiry as ‘not at its best’, I still found lots of discover and much beauty. I would like to return again in Spring. The descriptions of the garden in Spring in the book, along with my own observations, suggests this is a garden to visit all year around. 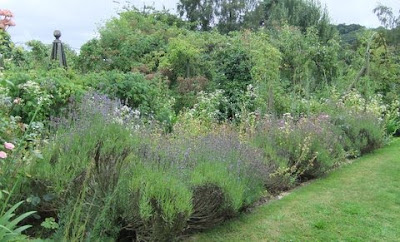