I love French beans, both climing and dwarf. One of the varieties I picked up when I attended Patrick of Bifurcated Carrots seed saving event last October, was ‘Ice Crystal’. This was given to me by Dr Simon Platten who also attended the event. He is doing some interesting research on British home gardens and the levels of diversity in them.

I picked up several other Dwarf varieties and sowed some bog standard ones (ie. that you can easily get from garden centres or online), but so far these ones have been the most successful. 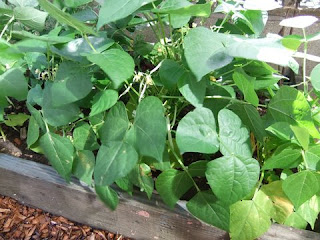 Even though the plants are not in the best position, they are in partial shade, they look incredibly healthy, as you can see. They are also quite prolific. Given I only planted five plants, in a week I’ve had two meals off of them (one for two people, another for three) and plenty more are growing.

They are unusal looking, in they are quite a pale green. 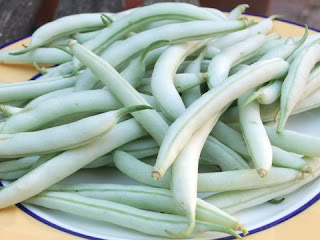 They might look a little anemic, but they were crunchy and juicy, a delight to taste. They went very nicely with my freshly dug Pentland Javelin potatoes and some honey mustard dressing, though just lightly steamed on their own would have been just as good.

I haven’t always have the best success with French beans in the last couple of years, being so wet; French beans (dwarf or climbing) do like regular warm sun to get going in my experience. Other standard varieties you can get at garden centres or online, like Maxi and Tendergreen, planted close by, haven’t done near as well, I guess they need more sun. I like that the Ice Crystal have done well under partial shade, as it suggests they might be a good variety for indifferent English summers.

I’m so pleased with them that I’ve decided to not pick any more, but just let them go to seed so I can save them and grow lots more next year.