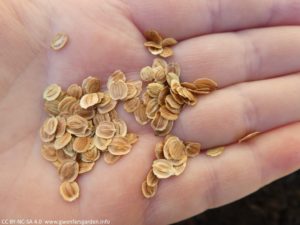 Frequently I see people comment on social media about the difficulty of keeping cats, foxes and other creatures, off their newly sown beds. I thought I’d share my tip, which pretty much always works.

These are newly sown rows of parsnip and beetroot. 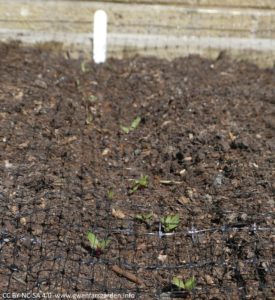 Basically, you need some netting and something to hold the netting down. Ideally, go for finer netting, as this will also keep the birds off the seedlings. And sparrows, in particular, love the fresh germinated leaves of vegetables like beetroot, spinach, chard and lettuce.

Right: netting over young beetroot seedlings. The netting is
held down tightly so birds cannot get under it and get trapped.

When I prepare the netting, I make sure I allow not just enough to cover the space, but also enough space for the young seedlings to grow without squishing up, and then growing through, the netting. Otherwise, when you come to take the netting off, you’ll pull out the seedlings. I fold under the extra netting and pin that down, then unfold it once I need to give the seedlings more room. In the picture above, you can see the netting on the bottom part of the picture has been folded over then pinned down.

Below is some netting over some salad seedlings. The glass cloche on the left is because I wanted that cultivar to grow quicker so I would a) have some new lettuce sooner, and b) by trying to get it grow quicker, I’m hoping I’ll have time to harvest but also let it go to seed so I can save the seeds before the autumn frosts hit.

The lettuce seedlings (below) are now getting bigger and were just about to start growing through the netting. So I’ve unfolded the extra netting and have lifted it to give them more space to grow. At this point, they are still a bit young for removing the netting entirely. I’ve done it too soon in the past and come out the next day to see the seedlings dug up.

The seedlings are now well established and have taken over most of the space, so it’s now safe to take the netting off. You can also see how the cloche made a difference, with the lettuce on the right being bigger than that on the left.

The parsnips and beetroot are slower growers, and still too young to take the netting off. It will probably be another month before they’ll be established enough.

When it comes to what materials to use, as you can see, I have used plastic netting. I’ve had this same netting for years and it just last and lasts. Netting is also easy to water and rain through. Because these beds are permanent, I’m cutting the netting to suit each bed, and when I take it off, I’ll pin a note to the netting before putting it away, noting which bed it fits for when I need to use it next time. Yes, I’m organised  🙂

To hold it down, I use steel ground pegs (see right). Again, these last forever. You could obviously use other similar tools. Some people use old soft drink bottles as individual cloches that protect and encourage germination and growth. I’ve tried this but found I had to lift them to water the seedlings, and that was just annoying.

I have tried tricks like using hot chilli powder spread around young plants, putting in lots of sticks to keep cats off etc. These can work a bit, but you have to reapply the chilli every couple of days and after rain, and a determined cat can work around sticks. I know, my cat is quite determined!

In the end, I’ve found the netting and ground pegs keep all creatures off, as well as safe from being trapped under the netting, and my seedlings are protected until they have grown up enough to go net-free.

Looking from the kitchen garden back towards the house

1 thought on “My top tip for keeping cats, foxes and birds off your newly sown beds”