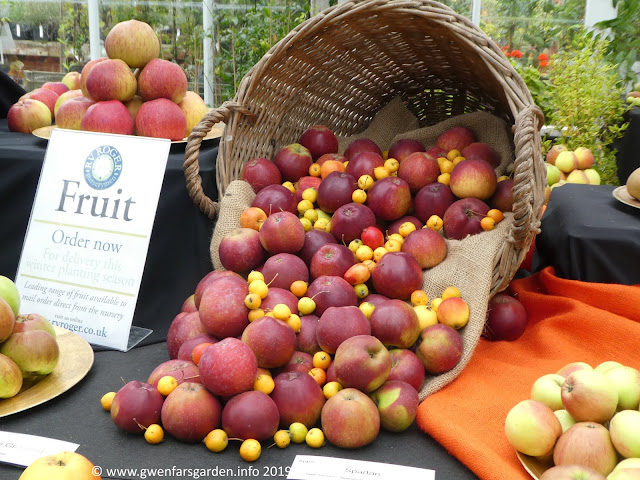 Back in March I wrote about the design for my Forest Garden Border, and mentioned that I would purchase these in the Autumn. I’ve previously purchased fruit trees from R.V. Roger Nurseries in North Yorkshire and have always been very happy with their quality, so it was the obvious place to return to for my Apples. They held an apple day this weekend, so we decided to make the trip up there. Not the least because they had quite a number you could taste, and this was the final piece to the puzzle, after much research, to help me choose the right apple trees for my garden.

But before I tell you what I chose, let’s take a quick look at the nursery’s apple day displays. The below is a photo capturing just a fraction of the apple cultivars they grow and sell at the nursery. 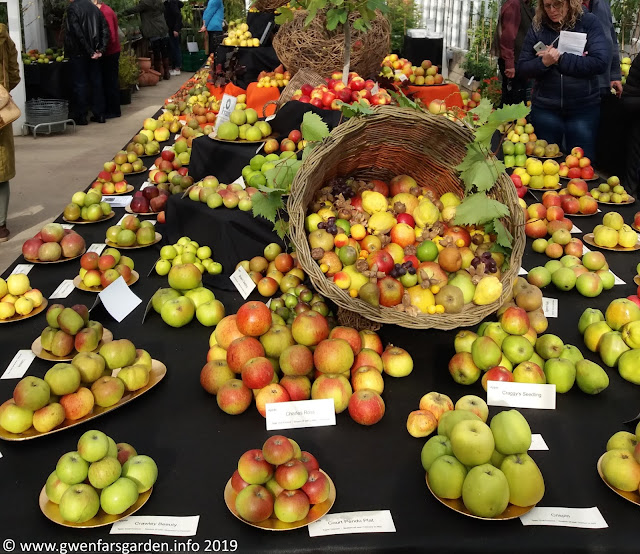 There was a table for the Yorkshire varieties. Many include wonderful names such as Flower of the Town and Sharleston Pippon. 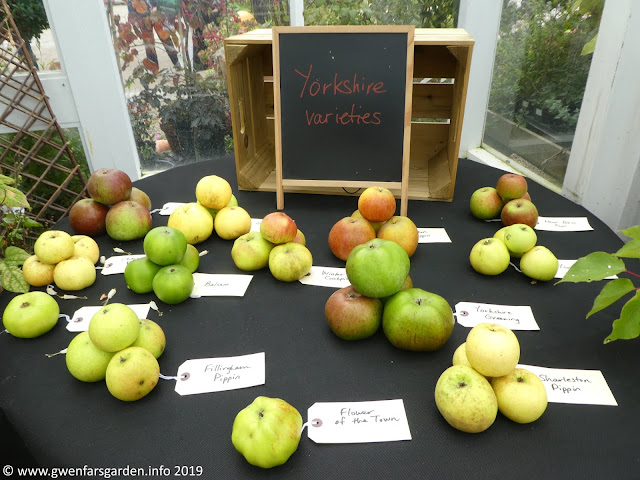 Elsewhere could be found the massive fruit of Peasgood Nonsuch, which would require two hands to hold one apple. 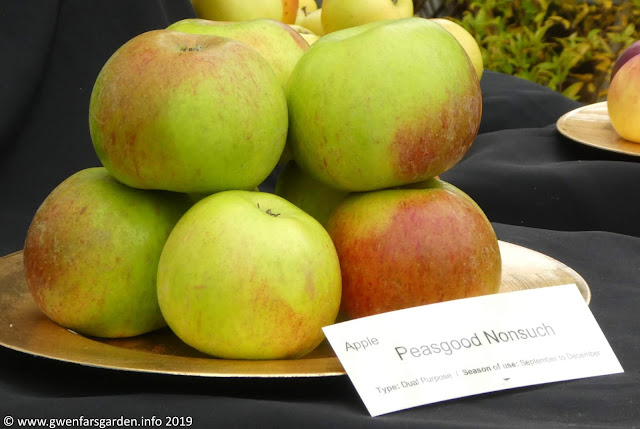 As well as the delightfully small Pitmaston Pineapple, that really does have the fragrance of pineapple. 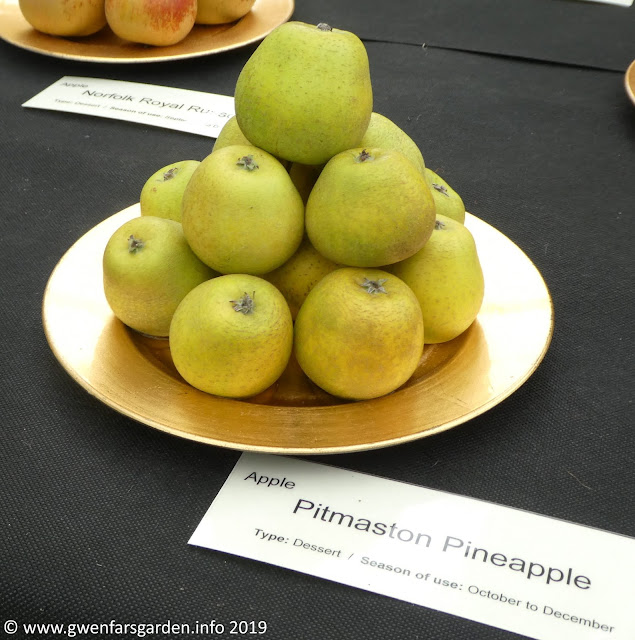 The displays were wonderful, and the fragrance in the greenhouse was heavenly. 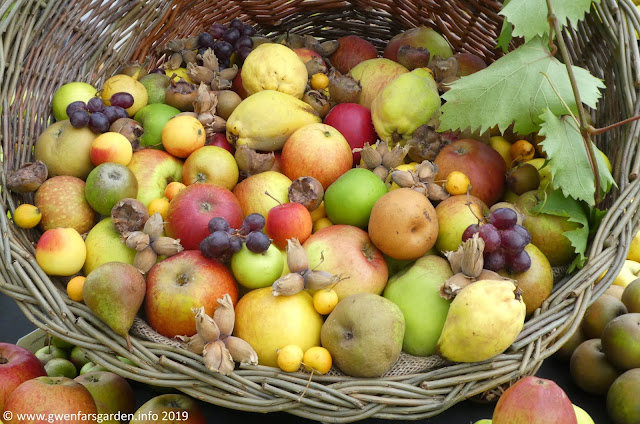 But what did I choose?! In each case, the choices were based on what Kevin and I both liked the most and how we would use them. 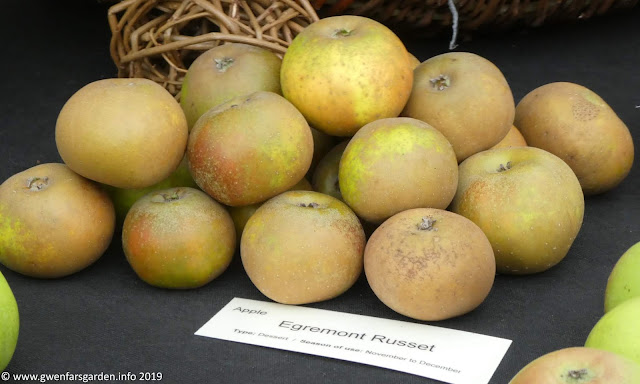 This a small dessert (eating) apple. The ‘russet’ part relates to the skin of the apple, which is rough, well, rough in apple terms; a majority of apples have smoother skins. The flavour was fabulous, sweet and juicy, and was our top choice. It had been on my shortlist because it was suitable for the North of England and a wetter climate. The flowers are tolerant of late frosts, and it has some disease resistance. You can pick it from October and it stores until the end of the year. 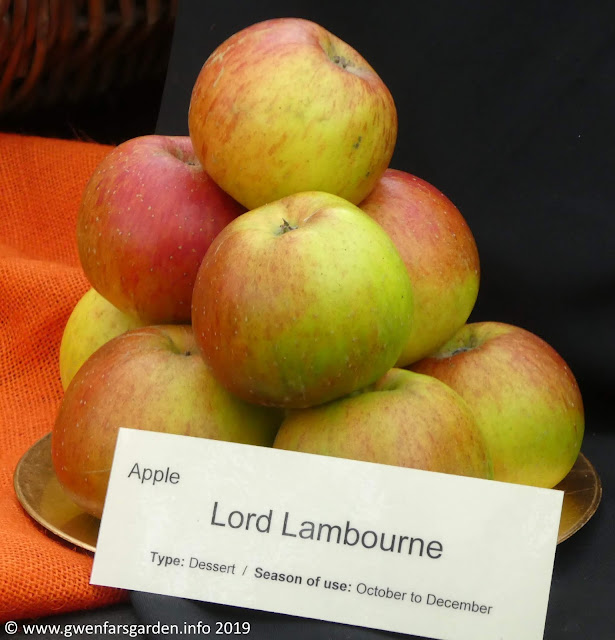 This is another dessert apple, with larger apples than Egremont Russet. Again, it was sweet and juicy, and this time has the smoother skin, and is suited to the North of England. It stores until the end of the year. It was a very close second with Egremont Russet.

I had been tossing up between choosing just one dessert apple and growing it as an espalier, or choosing two and growing them as cordons. As you can see, I went for growing two as cordons. Like all edibles, apples and their cultivars can have some better years than others, and by growing more varieties, I increase the chances of at least one of them preforming well in any given year. 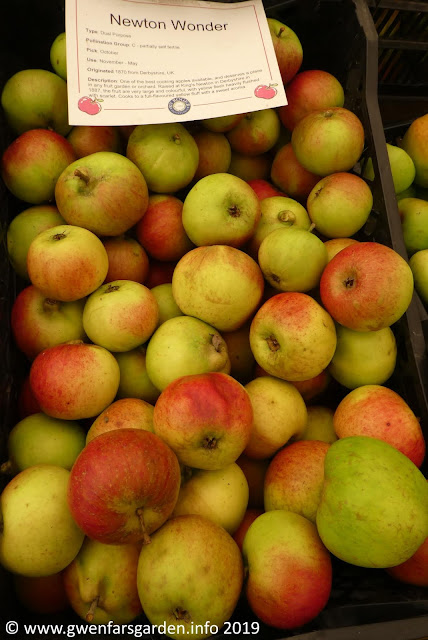 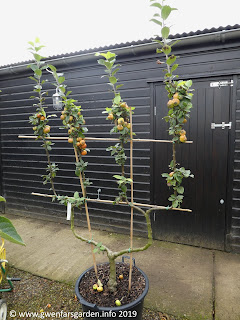 This is a dual purpose apple, meaning it has both dessert and culinary (cooking) qualities. It starts out as a cooking apple, then over time mellows to a lovely eating apple (we’ve tried it before). And because of it’s
long use period (you can store it between November and the following May), we can use it as a culinary apple first, then an eating
apple in the new year. It’s also another apple hardy for the North, with it’s blossoms being tolerant of late frosts.

In this case, I’ve chosen to grow this as a double cordon. To the right you can see a photo of a ‘Double U Cordon’, with two sides each in a U shape. I’ll be growing the Newton Wonder just as a double cordon, in effect, just one of the U’s in the picture.

I’ll be receiving my choices that have already been trained into cordon and double cordon shapes. They will be sent out  as bare root trees; trees that are dug up by the nursery in late Autumn when they are dormant. They’ll be posted (well, couriered) to me as is, so they won’t be in pots. I’ll need to either plant them straight away, or if I cannot do this, I could just ‘heel them in’. This is a process where you either just lightly plant them in a pot or bare soil, and then water them. You don’t go to great efforts, you are just ensuring the roots don’t dry out before you finally plant them. I’ll aim to get them properly planted in December.

Thanks to the R.V. Roger staff member (I sadly didn’t get their name)
who answered all my questions. It was lovely chatting to them and it
really helped me make my final decision.

So, I have my apple trees on order, and I’ll finally be able to complete the planting for my Forest Garden Border. 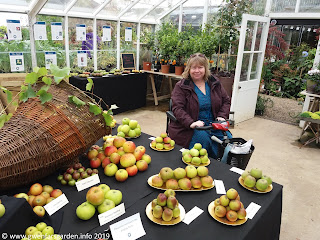 The author at Apple day

2 thoughts on “Apple trees for the Forest Garden Border”