Skip to content
Back in June I introduced the interim design for the back garden, but I haven’t yet got around to showing you how it looked during the rest of the year. Now it’s the end of the year, it seems like a good time to have a look at how the garden grew.

First, here is a reminder of the garden I inherited when we moved in. 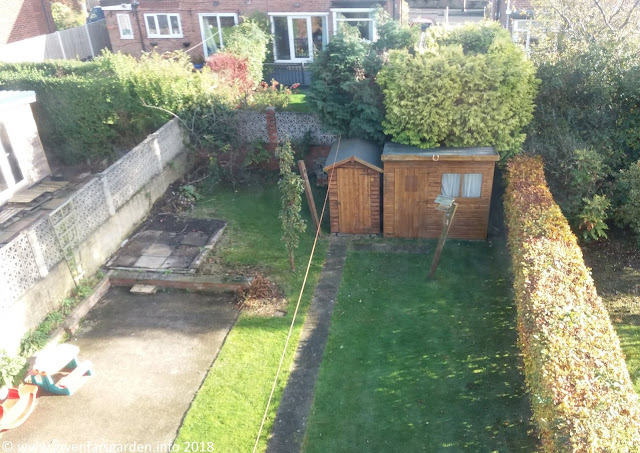 We gave the sheds away on Freegle, as we have a large garage that is now my garden shed. The conifers, which seem to drain away all light around them, were also removed.

This was the garden on completion of the landscaping work. 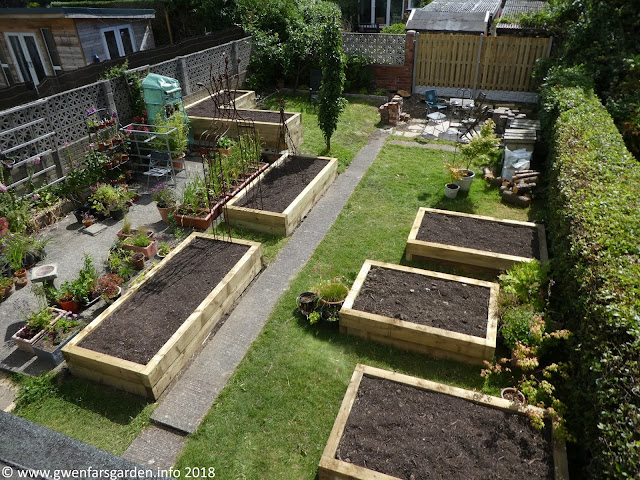 I then got a little extra work done, creating what I’m calling the Wisteria border, using keyhole gardens as an inspiration, along with my simplified version of a bug hotel (logs on the right). 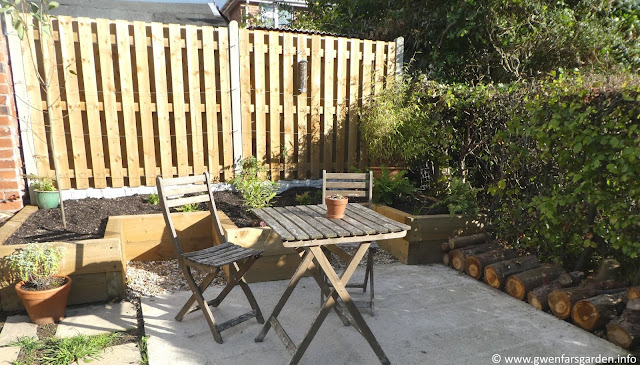 The bug hotel is made up of the trunks and thick branches of the conifers that were removed.  Eventually I’ll be adding a pergola to this area, allowing the wisteria (which you cannot really see yet) to grow up the fence and over the pergola, with seating underneath so you can enjoy summer shade and fragrance. The tree in the left keyhole bed is Amelanchier x grandiflora
‘Ballerina’, which is meant to be one of the best Amelanchiers for Spring flowering and edible fruit.

And an overview of the new garden at the height of the growing season. 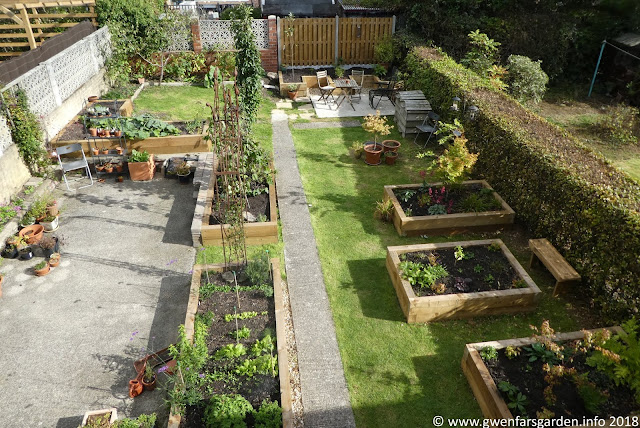 I had the height of the L-shaped bed (on the left, behind the concrete area) reduced by one level. I realised it was too high to comfortably access and weed, so I had the sleepers re-purposed for the new Wisteria Border. The plum tree, in the top left corner, was sadly chocked with black rot, and based on experience, I knew it was unlikely to recover. So it’s been removed and a new Greengage will be added in it’s place in shortly.

I also added a temporary bed where eventually another raised bed will be added. 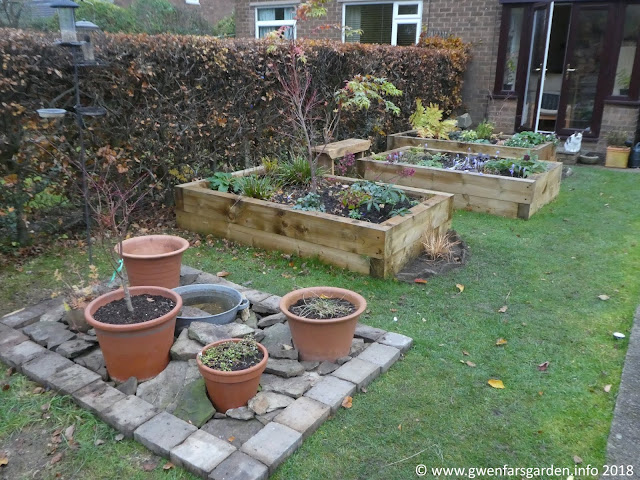 First we (my gardener Andrea and I) put down black plastic to kill off the grass and perennial weeds, then we added some of the paving stones that were left behind by the previous owners as a border. This will filled in with a range of pots, a mini pond, and some left over stones from the front garden. We added the stones in such a way that it gives a gradual climb up to the mini pond so that creatures like hedgehogs can access the water. And there are stones in the pond to allow easy access in and out for frogs and other pond inhabitants.

We installed a couple of water butts next to the house. Eventually I want to put in a couple of large rainwater tanks, to make the most of the large roof and water resource to capture and store. 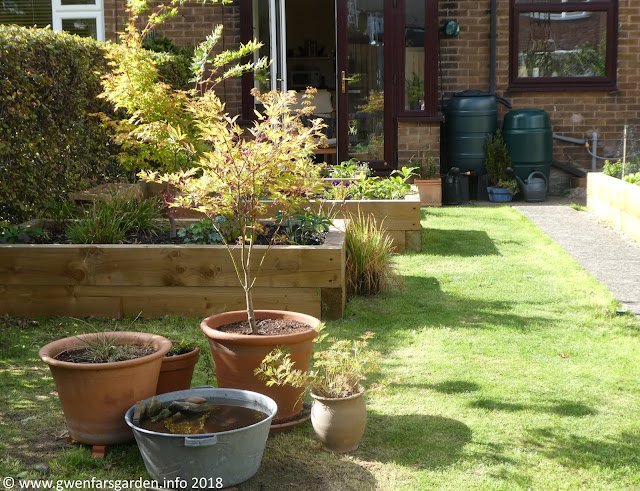 And here is the garden now, at the end of the year. 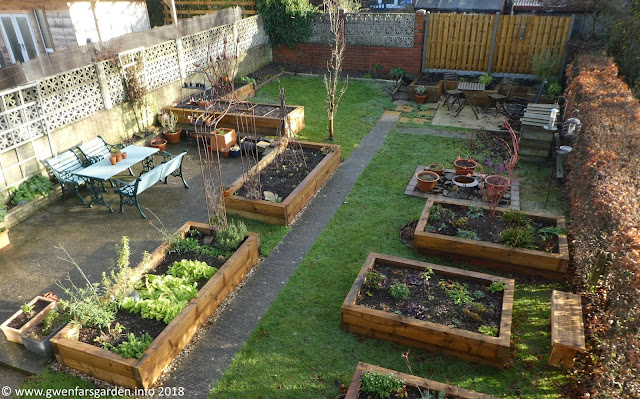 I’ve moved the bird feeder closer to the hedge. I’ve observed that birds seem to use feeders that are either close to trees or hedges, and this worked as it’s now attracted a lot more birds.

The concrete shaped blocks on the fence will soon be painted a sage green, and wire shall be added all along the fence so that I can train various
plants including clematis, a rambling rose, some ivy and/or other
evergreen climbers, along it. This should be more attractive than the
grey that currently dominates.

Next to the seat to the right I’ve had some of the hedge cut into, so that when you sit down it will be in a little alcove from which you’ll have some shade and be able to view the whole garden. 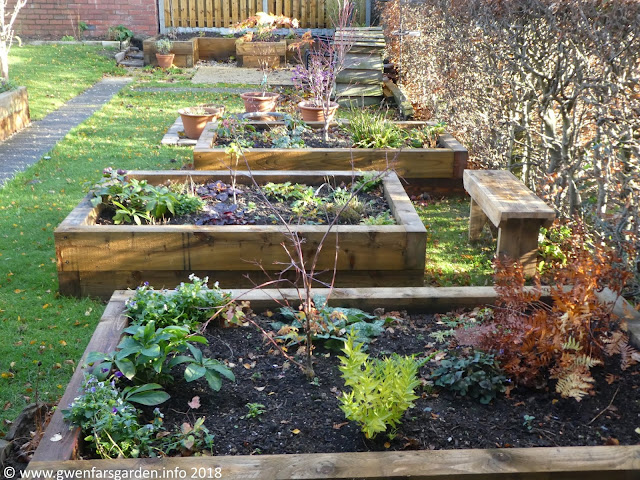 This is the end of the major work for at least a year, whilst I think about how to plan the next part and save up to afford the new landscaping! I do know that the temporary bed will become another raised bed, the pergola will be built, and between these a proper pond added. I also need to work out my plan for the grassy area in the top left, which will become more raised beds for a kitchen garden area. And I’ll also be adding in a mini forest garden. In the meantime, I am Am really pleased with my design, and the work of the landscapers and gardener.

Greenfinches and Goldfinches on the bird feeders. 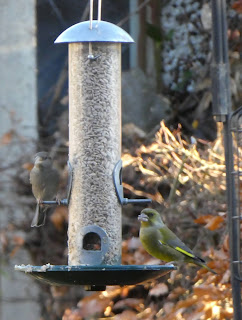 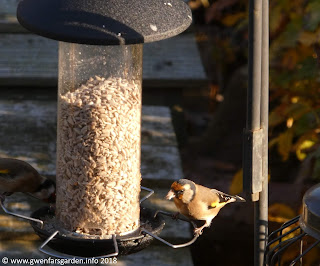 The garden is a little bare at this time of year. But already the first garlic shoots have come up, the broad beans are growing well and I should have some salad and herbs to harvest throughout winter. The first of the ornamental bulbs are coming up, and the garden will soon be bountiful in beauty and food, and as a calm and happy place to be. Not bad for a six month old garden.

4 thoughts on “Back garden – the first six months”