When I’ve been photographing my garden in recent months, I’ve shied off capturing the conservatory end of the Shady Border, because I was quite unhappy with it. I realised the border needed more height and a better shape than the straight lines it had. It felt flat, and the Ligularia and self-seeded Astrantia seedlings were taking over the space. 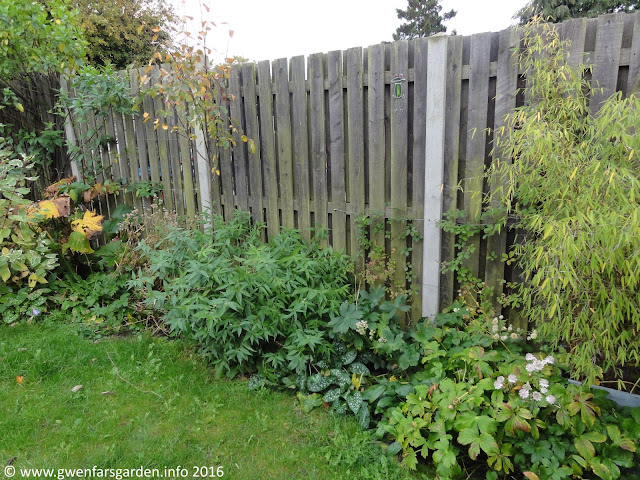 This part of the Shady Border before the work was done. The tree towards the left was sitting
in the pot temporarily.

I had been unable to do anything about it as I had limited energy to spend in the garden as it was, and most of what I did have focused on the veg growing. I did manage to work on a simple redesign and I even bought a tree, Amelanchier laevis ‘R.J. Hilton’ to help add the height. Last week, after finally being able to find a gardener, the skillful Andrea, to help me, the work was done. 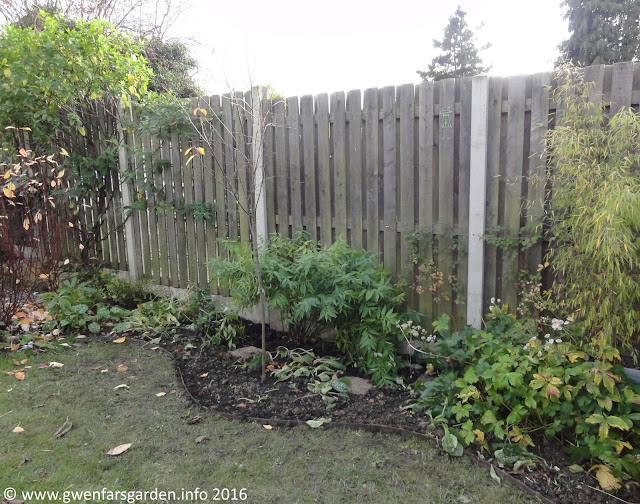 The new curvy border.
The border as been widened a bit, and the straight lines have gone. Although it looks a bit bare as I await the replanted plants to get growing again, I still think it looks better than how it looked before.
The Amlanchier is almost bare now, so you don’t immediately see the height, but it will be more obvious next Spring. By getting rid of some of the crowding Astrantias, I’m hoping the Akebia quinata will feel more like growing next Spring. This is an evergreen, and one of the jobs for next time Andrea is here, is to put up more wire to train it along the fence more. I think the Amlanchier and the Akebia, along with the Potato tree, Solanum crispum ‘Glasnevin’ on the left side, should help fill up the fence more and add the height and structure the border needed. 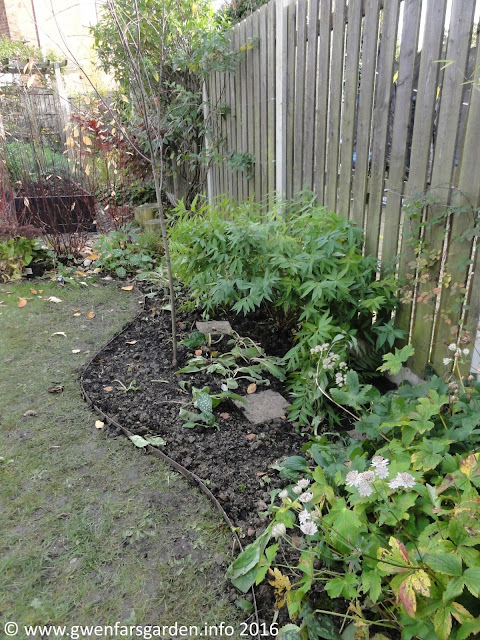 Pulmonaria ‘New Ensign’ was quite a clump, so Andrea split it up and planted it throughout the border. The same with Omphalodes cappadocica ‘Cherry Ingram’, and several primulas including Primula ‘Guinevere’. Taller primulas were moved to the middle of the border. Also planted was some bulbs of the autumn crocus, Crocus Speciosus Cassiope, which should come up in the next few weeks (they were trying to grow in the bag!). Plus I have a bunch of other bulbs to plant for Spring and early Summer flowering, such as Snowdrop Woronowii, Fritillaria Meleagris, Allium Oreophilum and Narcissus Pappy George. 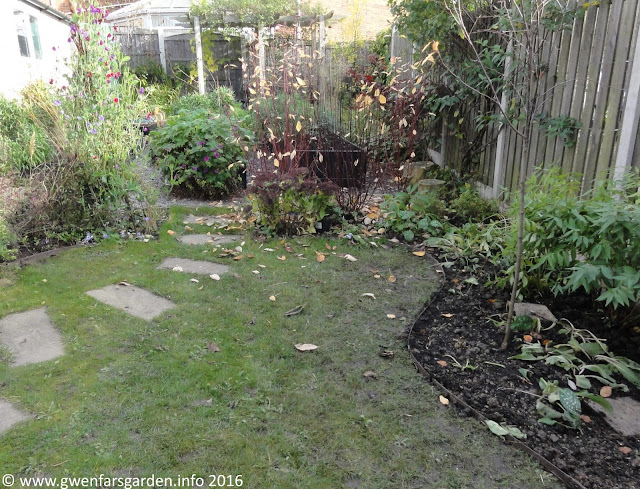 Finally, a couple of stepping stones were added. This is to make it easier to access the back of the border, and so I can access the hook from which my retractable clothes line attaches too. These will ‘disappear’ into the border once the new growth starts next Spring.

On the whole, I think the new curves in this area of the garden gives it a much better look and feel. I’m very happy with it, and with my new gardener, Andrea*, who has been a real find.

*Heartfelt thanks to Joanna Dobson, who saw my plea on Twitter and recommended Andrea.

7 thoughts on “Adding some curves to the Shady Border”