Skip to content
On our recent holiday we spend a week in Dumfries and Galloway. This is the lowland border area of the South-west of Scotland. I chose this as a holiday destination in part because I’ve always wanted to visit the sub-tropical Logan Botanic Garden. Our visit there alone made the trip worthwhile, but it’s not the only reason to visit the area. From the forest of Galloway Forest Park, the Mull of Galloway, to the lovely town of Kirkcudbright, there is a lot to see and enjoy in this area. Here are some photos (postcards) to give you a taste of Dumfries and Galloway.

Whithorn
Whithorn is the site of the earliest Christian community in Scotland. Though we didn’t have time to visit the exhibition and Priory, we did manage a short walk to St Ninian’s chapel. Though it might seem remote now, during the early medieaval period it was an important stop off point for pilgrims travelling by sea to and from Ireland, England and the Scottish Isles. 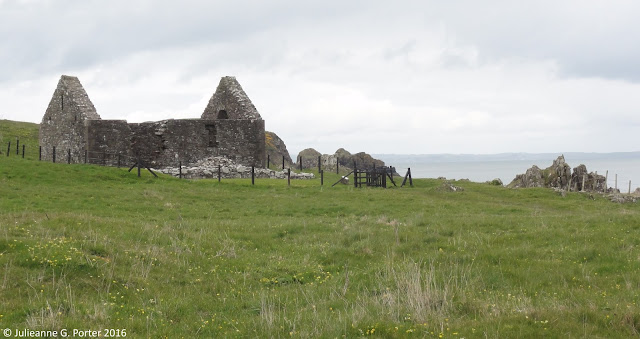 Bruce’s Stone and Glentrool
Having a chronic illness means it’s not easy to get out and about, especially when it comes to exploring landscape and nature. Thankfully there are some places in Galloway Forest Park that are accessible if you are able to walk short distances. A short careful walk from nearby parking meant I was able to see one of the two Bruce’s Stone’s (yes, the Robert the Bruce) and some wonderful scenery. The Bruce’s Stone at Loch Trool overlooks the site of a violent skirmish between Scots and English troops in 1307. 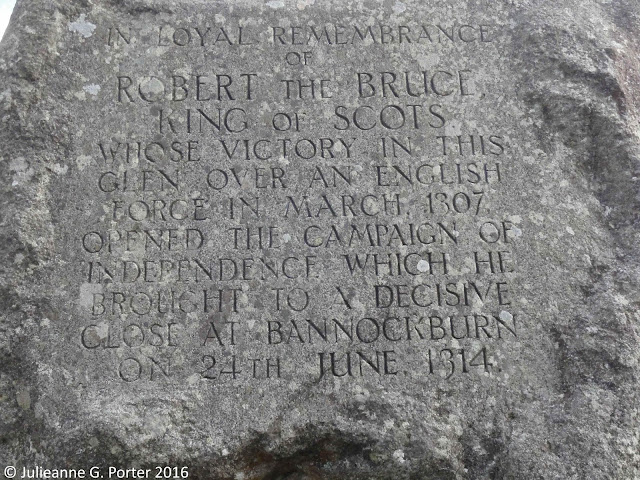 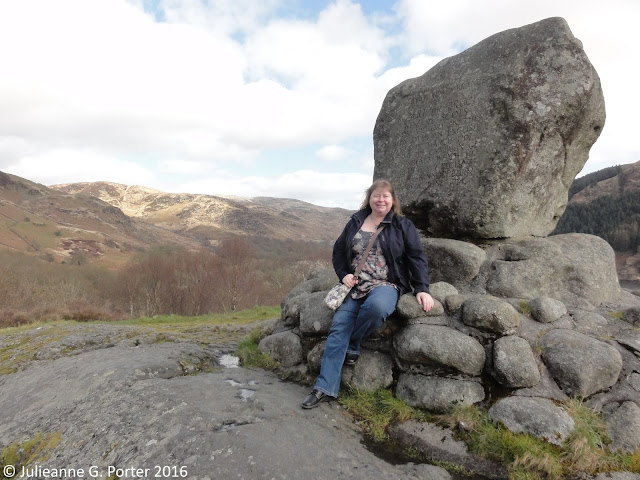 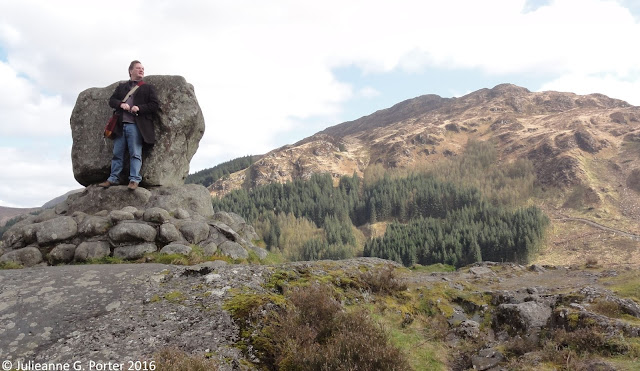 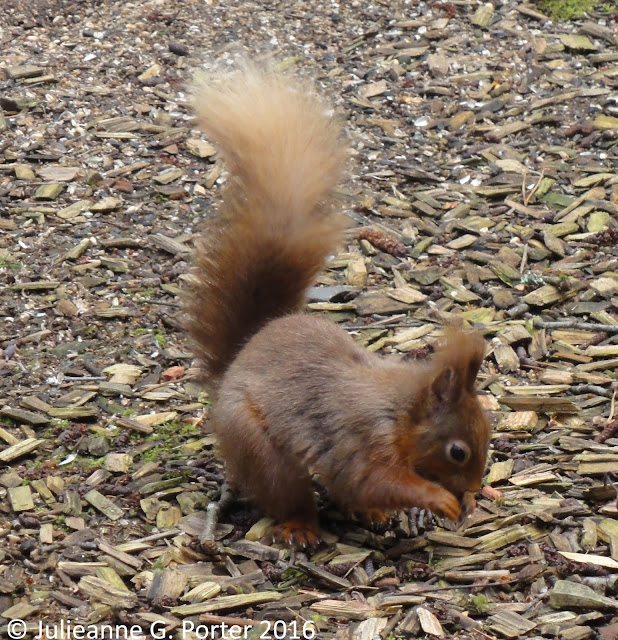 Broughton House Garden, Kirkcudbright
The pretty town of Kirkudbright (pronounced Kir-coo-bree) is a kind of artists mecca. Broughton House and Garden is the former home of Scottish painter E A Hornel, apparently one of the Glasgow Boys. Whilst Kevin did explore the house, some of which was designed by Rennie Mackintosh, I focused my energy on the garden. Hornel was influenced by his interest in Japan, and this can be particularly found in the part of the garden closer to the house, which had lots of ferns, moss and some acers. 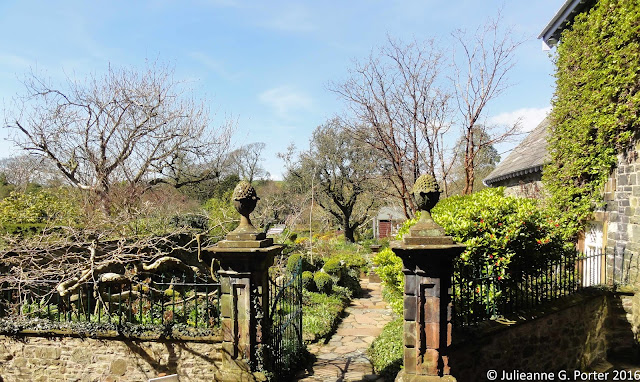 Entrance
The idea that I came away with from the garden was embrace the moss! I’ve been fighting with moss in the Bog Garden area of my Long Shady Border. But after seeing it so artistically entrenched in this part of Broughton House Garden, I realised I shouldn’t be wasting time getting rid of moss, instead, embrace it. Which is what I plan to do, along with finding some interesting large rocks like below. 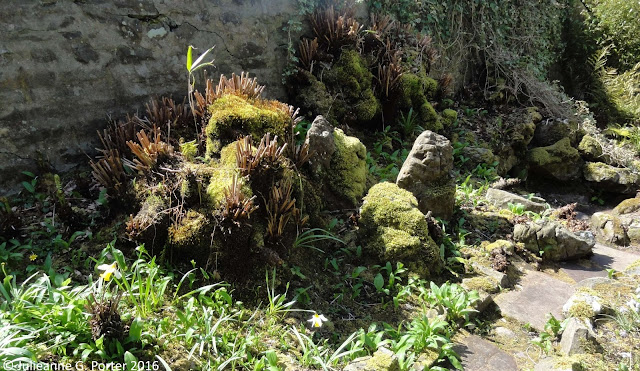 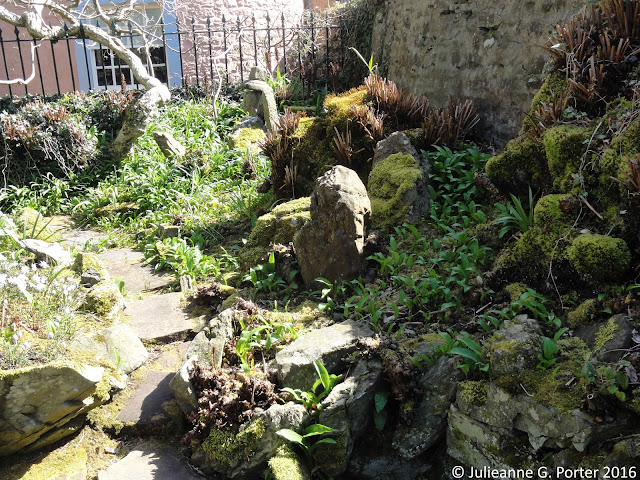 Elsewhere in the garden, I loved this sunny combination of yellow Erythronium’s, yew hedging and ferns. 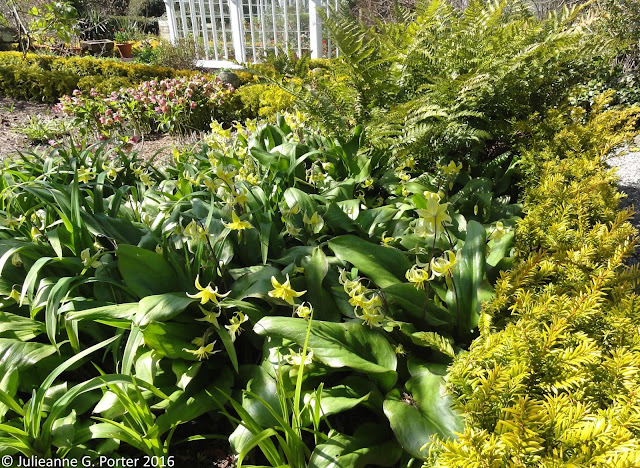 The rear of the garden backs onto the harbour on the River Dee. 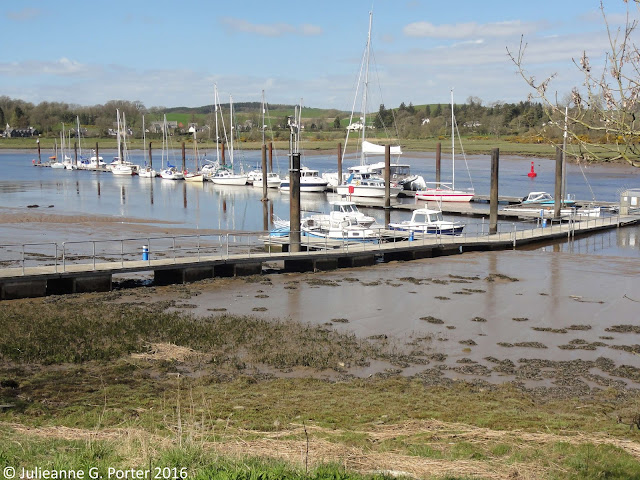 Twisted wisteria growing over an arch. It would be delicious to walk under the arch when in flower. 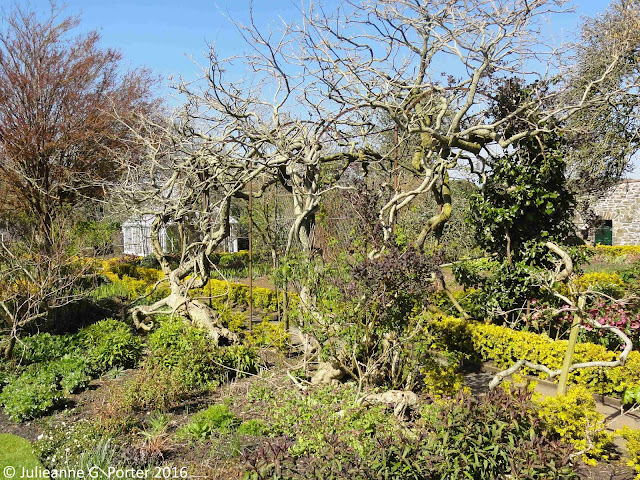 Pond area, with the house to the right. 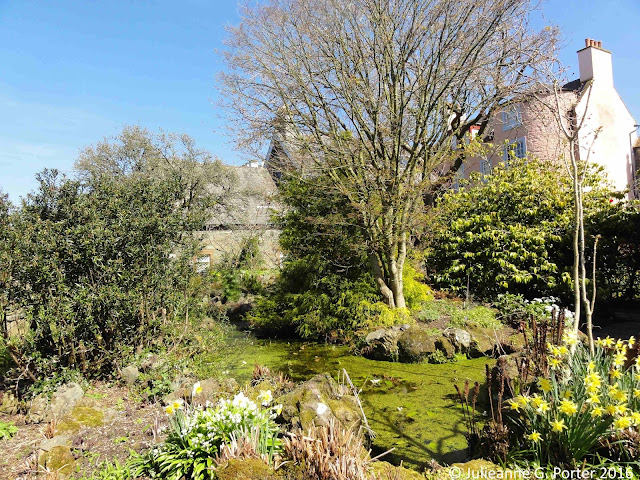 We both enjoyed the garden and I’d love to return sometime in the summer to enjoy seeing everything in flower and leaf and to sit amongst the moss in the shade.

Mull of Galloway
The Mull of Galloway is the most Southerly tip of Scotland, a few miles on from Logan Botanic Garden. We were blessed with the most amazing weather that day and the views were quite spectacular. Although you cannot really tell from the photos, we could see the Isle of Man in the distance one direction, and Ireland the other.

The view towards the lighthouse and the Lake District.

Looking towards the Isle of Man. 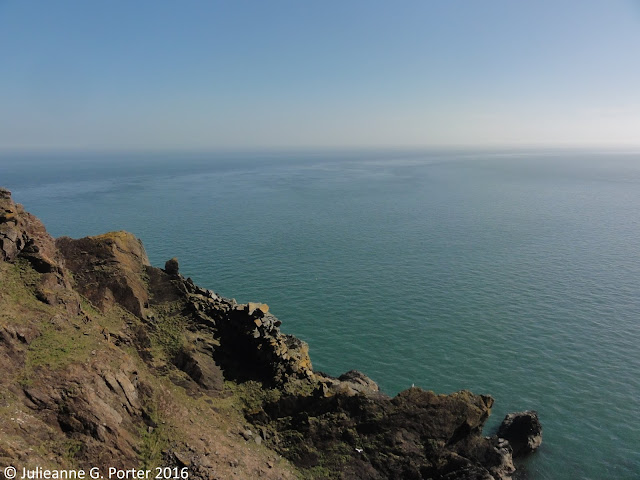 Sun beginning to set in the West, Ireland in the distance.

To top it off, there is a good cafe, the building above, part built into the cliffs with a green roof. Ice-cream was purchased, we sat in the sun and drank in the views.

Gorse and and wild goats
Throughout Dumfries and Galloway Gorse was in full flower and I’ve never seen it so en-mass as on during our holiday. 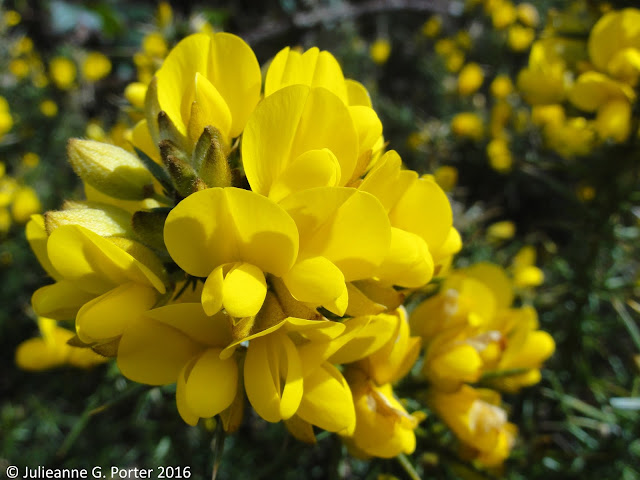 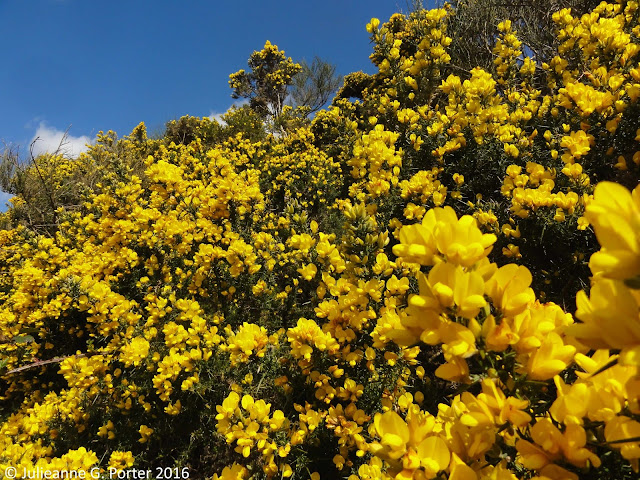 There was also a Wild Goat Park not to far from our cottage, which we had to visit. Why had? Coz I love goats! Apparently these are an ancient breed of goats, though they just looked like cute goats to me.

Do you goat to point that camera at me? 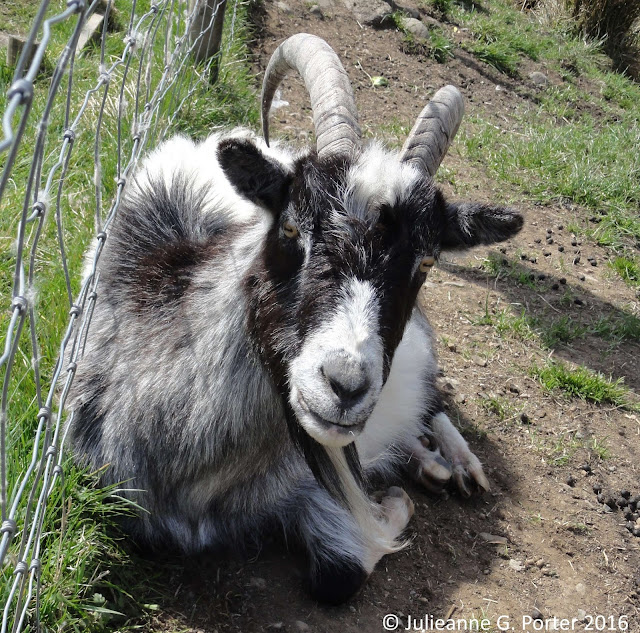 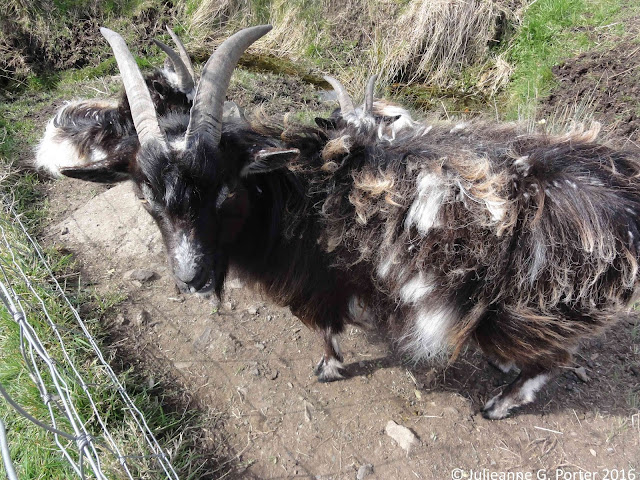 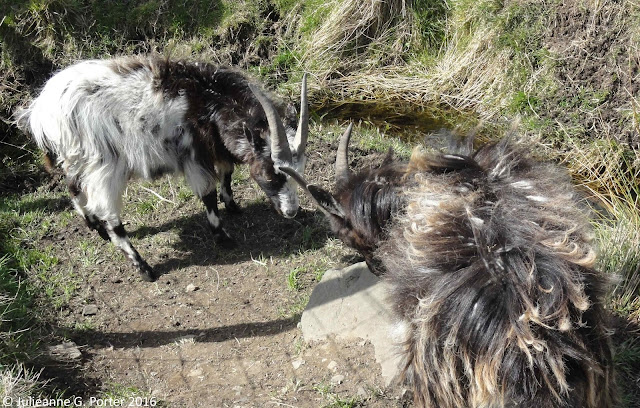 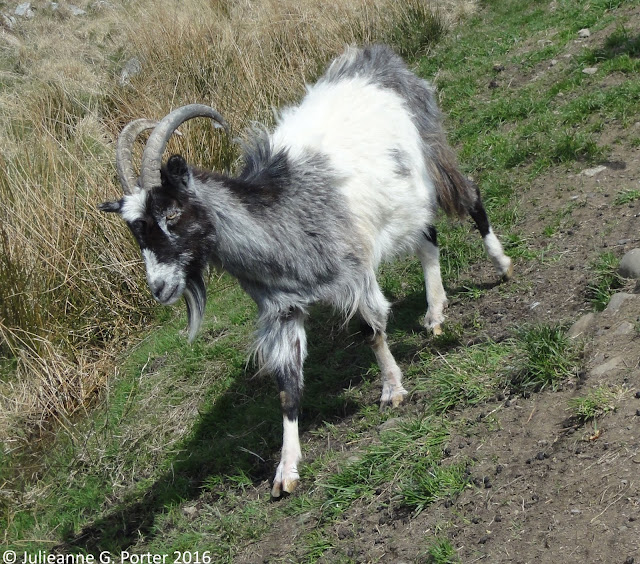 “High on a hill lived a lonely goatherd…” I swear I couldn’t get that song out of my mind for the rest of the day. Darn, I’m singing it again. …  Are you?! 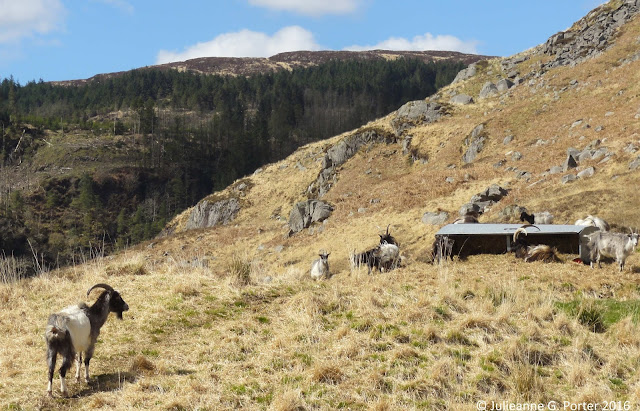 * * * * *
Finally, we stayed at Willow Cottage, just inside Galloway Forest Park. Not only was it well situated to explore the area, it was beautifully appointed inside, and just the views from the lounge room were enough to make it worth a second stay. It also had everything you could possibly need, and was all on one level, making it accessible-friendly. The best recommendation I can give you is that we will definitely stay here again when we make a return visit. 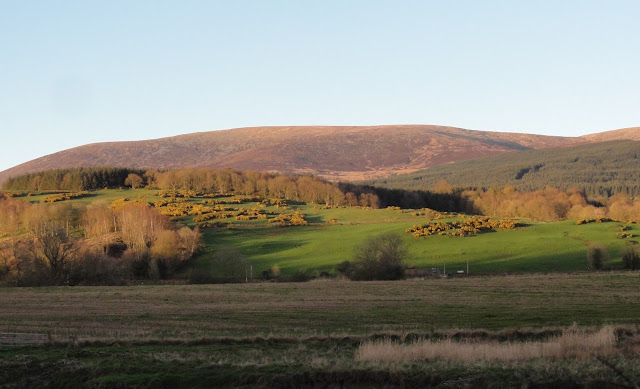 View from the lounge room of Willow Cottage, Cairnsmore of Fleet.

This is only a taste of what can be found in Dumfries and Galloway. Because I had to rest up a lot (coz ME), we didn’t get to see even a quarter of what we would have liked to have seen. So we will definitely be returning. With the Gulf Stream bringing about good weather, the beauty of the landscape and the many things to see and do (gardens, goats, coastline, gardens), I’d encourage you to visit to Dumfries and Galloway and explore it yourself. 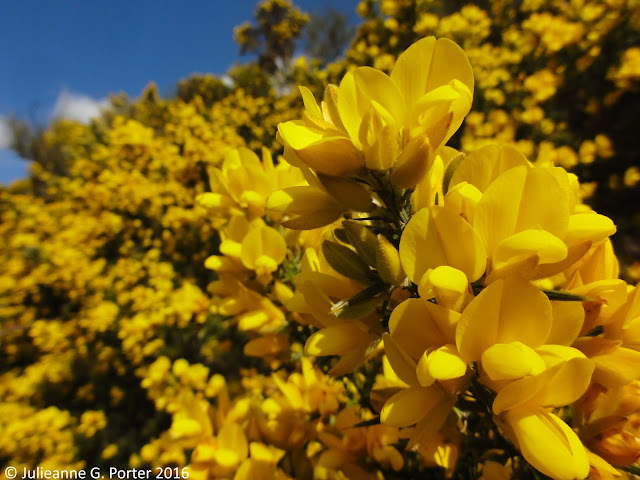 3 thoughts on “Postcards from Dumfries and Galloway”