Last October I blogged about facing the fact that I couldn’t continue to garden like I was a normal healthy person. At the time my ME was getting worse, and I had to rethink how I garden. Part of the plan was to get in paid help, which I did. In January this year I also did a skill swap with my friend J-P. In return for me doing a permaculture design for his new garden (a different kind of energy use from gardening), he would come and help me out in my garden. This has been incredibly helpful, and I’m now coming into a new growing season and ready the implement the other idea I mentioned, Spoonie Veg.

What in the halls of horticulture is Spoonie Veg, I hear you cry?! First I better explain ‘Spoons’ from which Spoonie Veg derives. Spoonie comes from Spoon Theory, first described by Christine Miserandino. Her website But you don’t look sick explains it fully (I highly recommend it), but for a simple introduction, Suzy Coulson’s How will I use my spoons today poster (right) should give you the general idea. Spoons are a measurement unit of energy.

So say I have c. 15 spoons (units of energy) a day and might use some of them thus:
x1 spoon getting up
x3 spoons shower
x2 spoons x 3 for breakfast, lunch and dinner
That’s 10 spoons already, before I’ve dealt with other activities like appointments, household activities (from general housework to paying bills etc), seeing friends, etc. And any kind of gardening activity will use up at least 5 spoons. For those who want to know, sadly I don’t have enough spoons to have a job. For me at this point in my illness that would need like 30 spoons on it’s own, at least, so you can see the problem there.

Of course, you don’t have say 15 spoons every day. I wish! Like many chronic illnesses, ME is a fluctuating illness. That means it can change day-to-day, hour-to-hour. I can wake up one day and think I might have 10 spoons approx for that day, then part-way through the day, crash and have to return to bed, having only used up 4 spoons. Those remaining 6 spoons don’t get carried over. They are lost (actually, they never existed). It might mean cancelling a planned catch-up with friends, gardening tasks, or even a shower. Fluctuating illnesses are a daily/hourly negotiation and energy (spoons) is never guaranteed.

Hopefully this has given you some idea about spoons/energy. Now on to Spoonie Veg*.

Around the period I mentioned above, my friend Ingi and I had been discussing on Twitter what veg, fruit and herbs we could grow that didn’t require too much energy from us as people with chronic illnesses and health/mobility issues. This is us, and people like us, who cannot spend as much time and energy (spoons) tending and harvesting our crops as those who are healthy. From a permaculture perspective you would look applying the ‘low input, maximum output’ model, but within the context of growing food when you have a chronic illness. We came up with the idea of Spoonie Veg, and I think an example will best help to explore the idea.

Strawberries don’t need anywhere near the amount of attention that tomatoes do. For strawberries, you use up spoons for planting, occasional watering and feeding, then harvesting and preparing/eating, Plus extra spoons if you want to take runners for future plants.
vs
Tomatoes, whether you sow from seed yourself or buy plug plants, they need potting on, planting out, watching for late frosts, regular feeding, constant watering, worrying about and looking out for blight, pinching out, tying in, checking you haven’t over/under watered/fed, checking for pests, and then if the summer has been half-way decent to mean you are lucky enough to actually get fruit, harvesting and preparing/cooking. Lots more spoons. 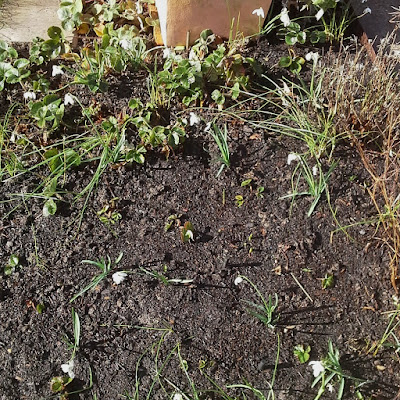 My strawberry patch, half of which I recently replanted with runners saved last year to 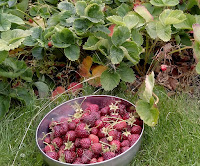 Ingi and I thought of applying a number between 1 and 5 to each fruit or veg to indicate how spoonie intensive each item was to grow. We both thought Strawberries were fairly easy and didn’t need a lot of our time and energy in order to gain a harvest, so we gave them a Spoonie Veg rating of 1. Tomatoes however, require lots of energy and time on a very regular basis, for months, and at times they will need tending on a daily basis. So these we gave a Spoonie Veg rating of 5.

Another example might be the difference between dwarf and climbing French Beans. They are both beans right, how different can they be? Both start out the same, sow seeds in modules, plant out. But climbing beans require the put up climbing canes/frames. Suddenly that takes energy use up a level, because not only do you have to put up (then take down) the canes, but you also have to check regularly that the beans are in fact climbing up the canes and not along the ground or into other veg. Last year I had to stop some climbing French Beans from twining around my parsnips! Anyway, this means Dwarf French Beans take 1-2 spoons, but Climbing Beans take 3 spoons. 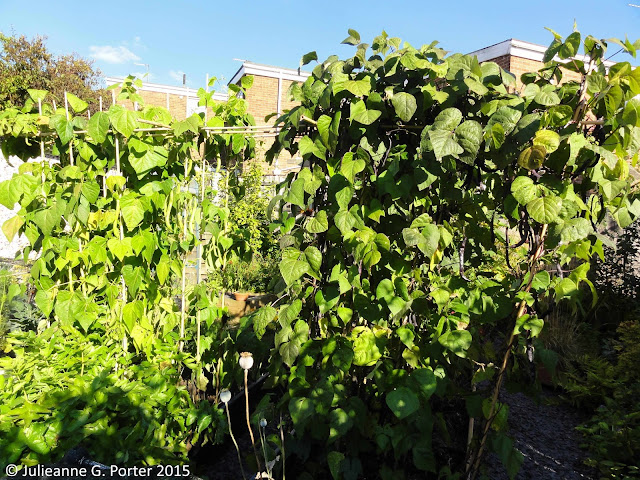 Last year’s climbing French Beans, some whom thought growing down around
the parsnips (bottom left) was a good idea

Another factor, you have to grow what you want to eat. No point deciding to grow Lettuce and Strawberries if you don’t like them, even though they require less spoons than Climbing French or Runner Beans. In my case, I adore, simply LOVE Broad Beans, a veg that isn’t easy to buy fresh. If I have to decide between putting my limited energy into either Climbing French Beans or Broad Beans, I’ll go for Broad Beans. So it’s all a balancing act between what you want to eat, how many spoons you have, and how difficult or not a particular crop is to grow.

Here is a list of some fruit, veg and herbs and the Spoonie categories I’ve assigned to each:

Of course, how energy intensive a fruit or veg might be to grow can be highly subjective. It can depend on everything from how much you already know or don’t know about growing in the first place, to how mild, moderate or severe your chronic illness.

Furthermore, the rating I have given for each item above might be quite different to what another spoonie gives to the same vegetable etc. So where I give Dwarf Beans a 1-2 rating and Climbing Beans a 3 rating, Ingi would swap them around. For Ingi, harvesting Climbing Beans is easier on her back, and she finds them more forgiving of occasional neglect than Dwarf Beans, which are highly susceptible to slugs in her garden. For some reason this is less of a problem in my garden, possibly my 45cm high raised beds. So the numbering system is from my perspective and is for guidance. It’s not an exact science. 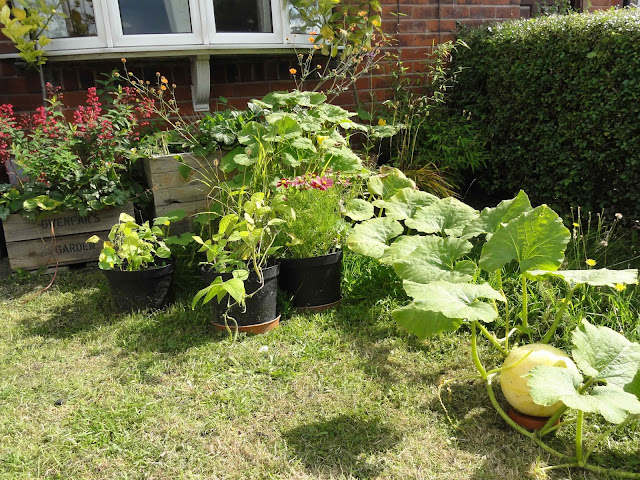 Pumpkin growing out of a planter and going for gold, in my front garden

Finally, although the focus of Spoonie Veg idea is to show others with chronic illnesses the growing possibilities, this could also be of use to people new to gardening and who are embarking on their first attempts to grow their own.

Over the coming months I’ll be blogging about some of the individual fruit, veg and herbs listed above, going into detail to explain why I’ve assigned that specific number to each.

It would be excellent to hear about your experiences, it doesn’t matter whether you are a spoonie or not. What fruit, vegetables or herbs should be added, with what Spoonie Veg rating, and why? And if you are on Twitter, use the #SpoonieVeg hashtag.

*As you have probably noticed, Spoonie Veg also includes fruit and herbs. Somehow Spoonie Veg, Fruit and Herbs didn’t have quite the same ring to it 🙂

19 thoughts on “Gardening with ME: an introduction to Spoonie Veg”