Skip to content
Rosy Hardy from Hardy’s Cottage Garden Plants gave a practical demonstration and talk on Spring plants for the garden at the South Pennine Hardy Plant Society last week. Rosy brought along a selection of Spring flowering plants and gave a great talk, filled with useful detail and hints for growing. What follows are my notes (any mistakes are mine) on many plants for growing in a mix of shade and sunny positions.

Dry shade
Scopolia carniolica is related to the potato and has purple bell-shaped flowers. It likes dry shade. It is happy in poor dry soils, including dry shade which is often hard to source plants for. The foliage dies back in summer.

Moist and/or humus rich shade/part shade
White Lamprocapnos spectabilis ‘Alba’ lasts c. 6-7 yrs, longer than the pink and red varieties. It likes part-shade moist soil, but not too damp, and doesn’t do that well clay. For dividing plants it is better to split in Spring when they are just coming through as there is a risk of rot if you do so in Autumn.

Epimedium grandiflorum ‘Lilafee’ (below photo of Rosy’s plant) is deciduous Epimedium with pretty purple flowers that is tolerant of clay as well as other soils. Once the plant has settled in you can divide it in autumn. Rosy warned the audience that we should be aware that a lot of new Epimediums are deciduous acid soil lovers so not suitable for alkaline soil. 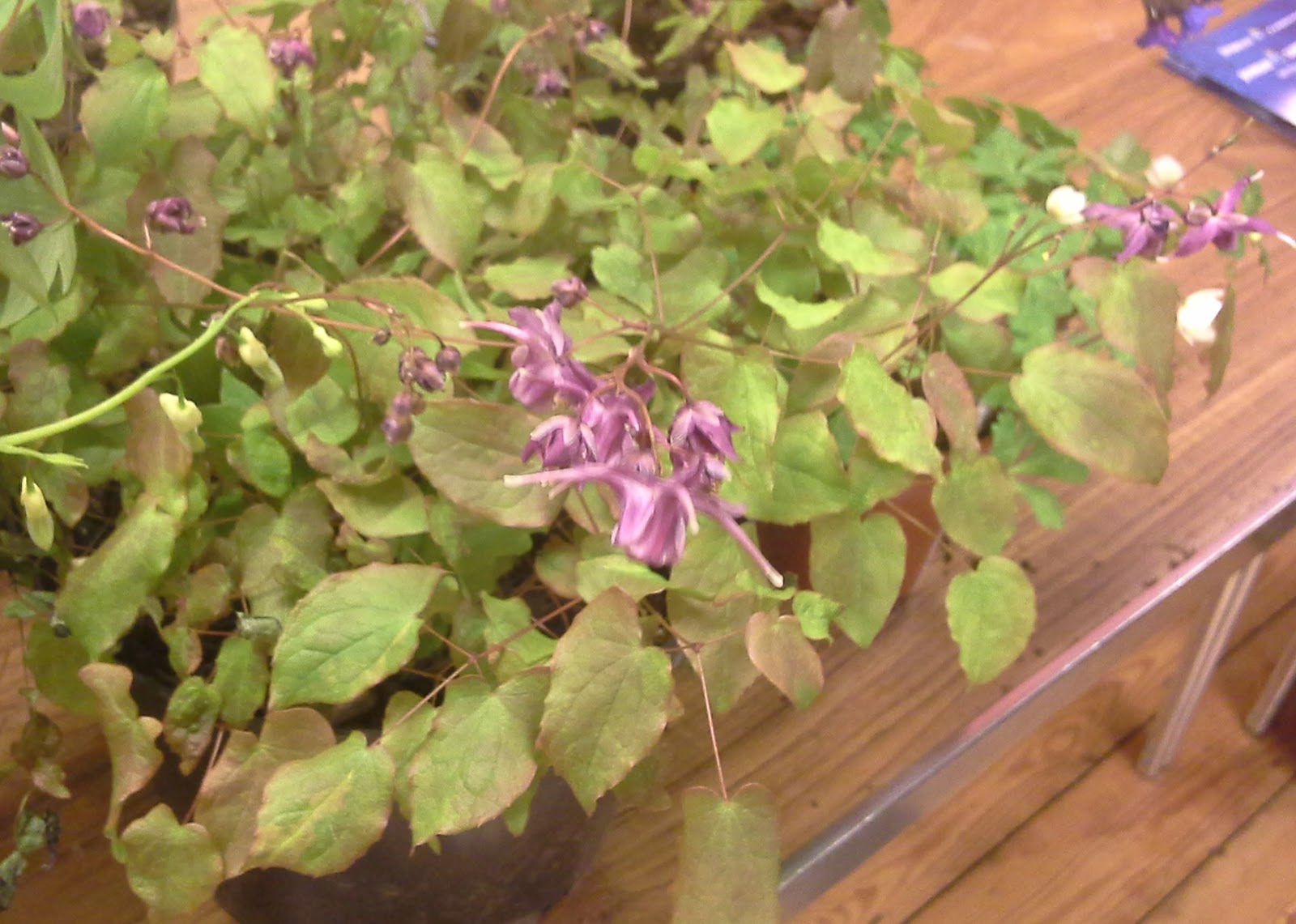 Anemone flaccida, also called the twin flower, is a single white flower that closes at night as wants to be pollinated during day. The flowers are held above the foliage and it enjoys a moist woodland environment. It is easy to divide but is summer deciduous so it is best to divide it just as it finishes flowering. 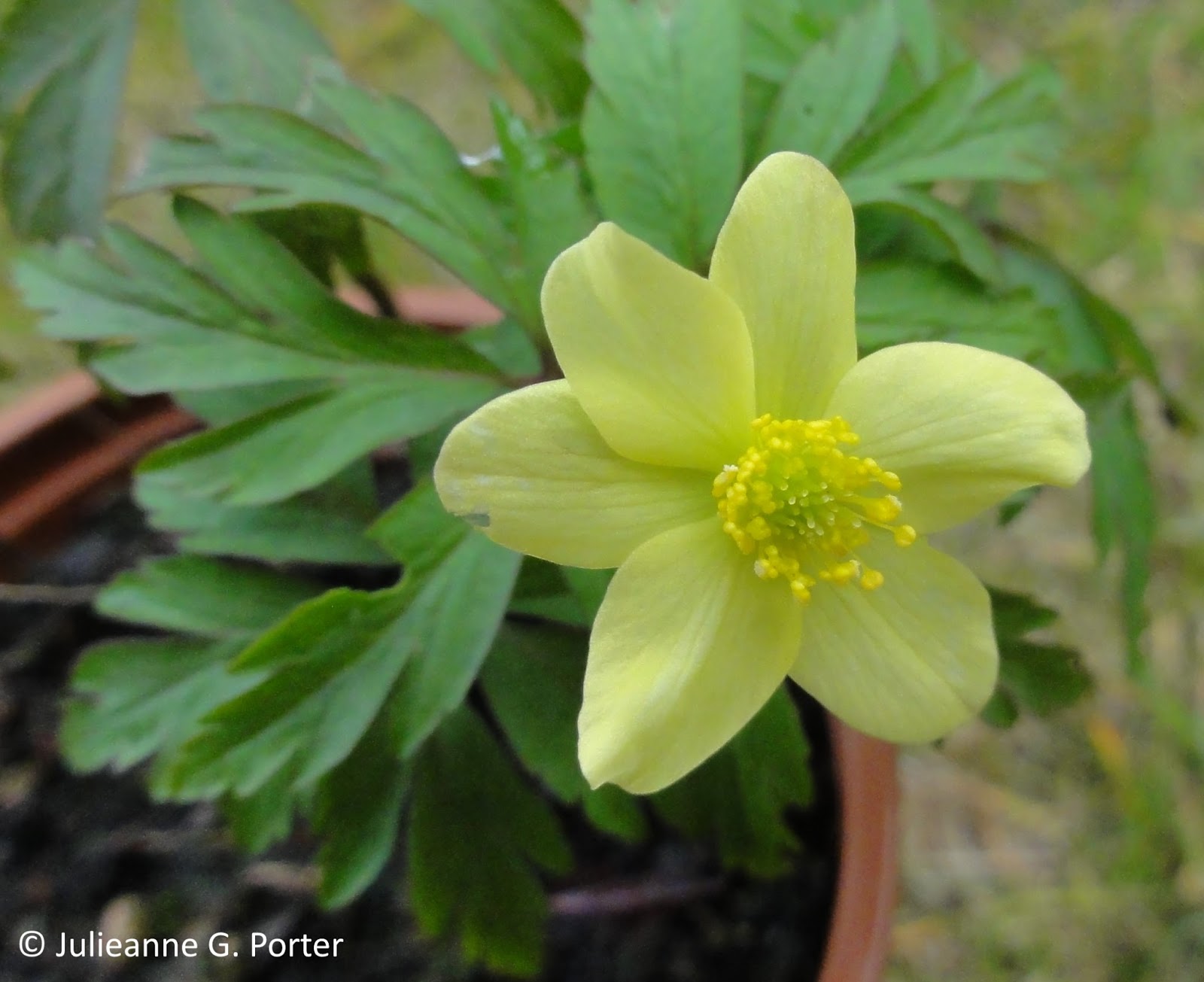 Anemone x lipsiensis (right) has pale yellow flowers which bloom for quite a long time. They can take some time to establish. This is another summer deciduous plant and Rosy recommended that you put the plant label at bottom of the hole so that if you accidentally dig it up you can identify it and replant! It sends out stolen roots c. 2-3 inch down in soil.

Primula Guinevere. It was interesting to learn that for this variety the first 1st lot of flowers are single stemmed and those that follow are multi-headed. I must remember to take more notice of what mine are doing… They grow this way as the leaf grows over the first flowers and it is the multiheaded flowers can tend to get pollinated. Divide when they finish flowering. They like sun or part-shade in humus rich soil. I can also add that mine seems to survive, a somewhat bedraggled, in what is now my Bog Garden, so it can survive being wet. Suffice to say I’m going to move mine down the border a bit to give it more of a chance! 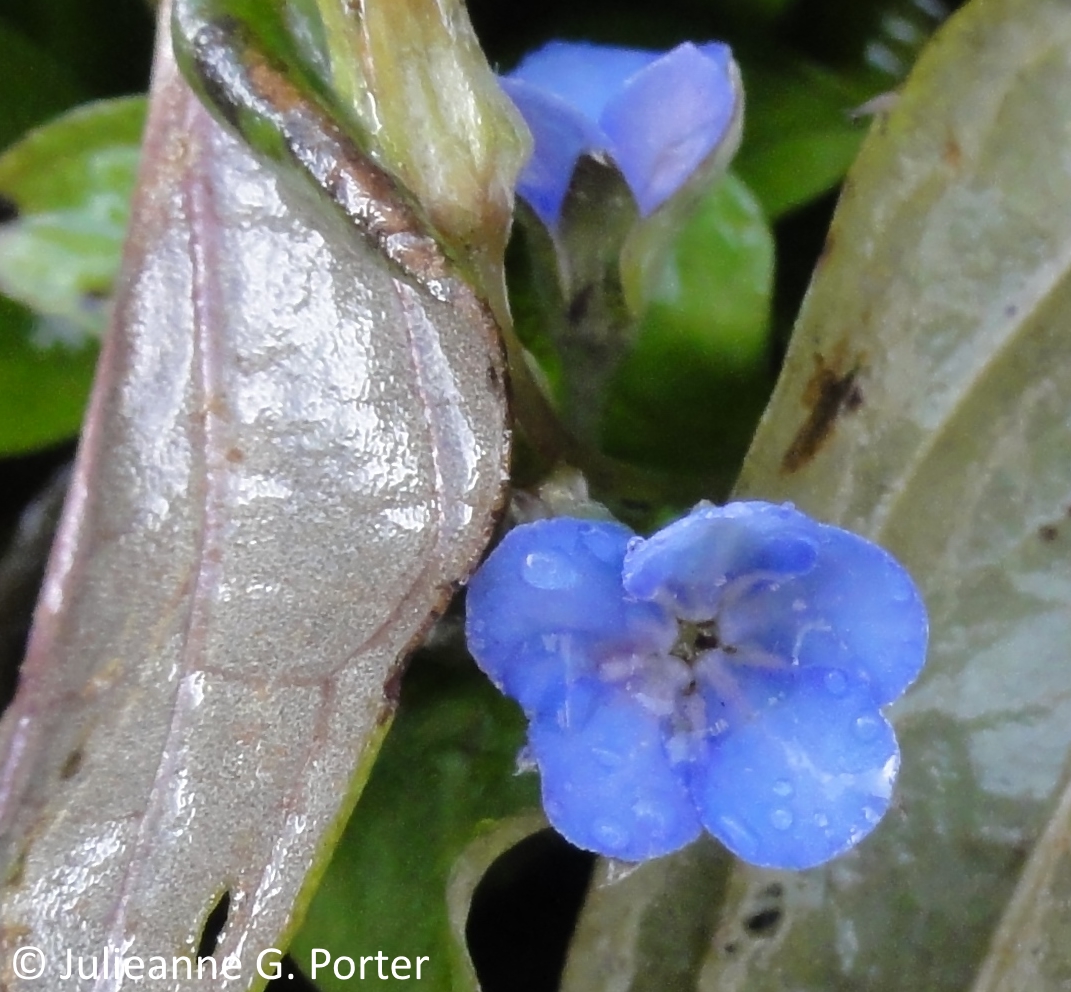 Omphalodes cappadocica ‘Cherry Ingram’ (first below right, from my garden) is low growing with small sky to dark blue flowers and the plants form rosettes that can be split off in autumn and planted up. Give haircut (trim, that is) at the end of February to get rid of old foliage as this is difficult to get rid of later. Rosy said it prefers dryer soils, but just to be contrary I can report that mine has been doing well in damper soil! 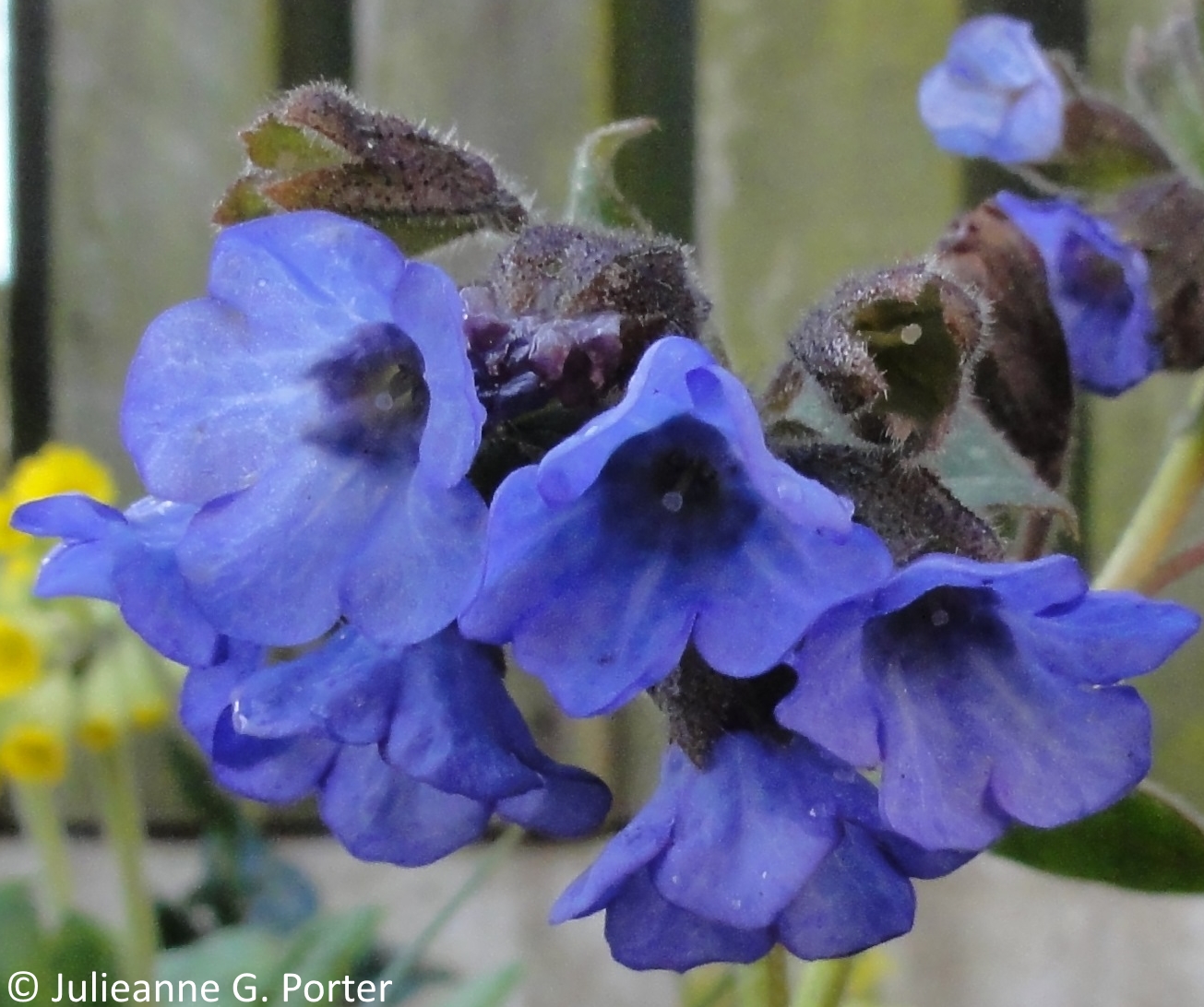 Pulmonaria ‘Blue Ensign’ (second below right, also from my garden) is the bluest of the blue Pulmonarias, and is a woodland plant that likes moist soil (though not boggy). It doesn’t like sun as this will give it mildew. The foliage dies back around August and August -September is the best time to to divide it, around every 3-4 years. Rosy commented that the newer name varieties don’t tend to produce much seed.

Lathryus vernus has purple, nearly blue flowers and looks like small shrub. It is very difficult to split as the density of the roots is same as the density of growth. It will set seed but this is unlikely to be true. The plant is quite tough and grows even in Arctic circle. In the South it needs to be grown in semi-shade. It is sadly not fragrant, but is good for early bees, flowering mid April in the North. To propagate, take cuttings of young spring growth and put in propagator; don’t leave these in the cold.

Pulsatilla vulgaris ‘Blaue Glocke’. In general Pulsatilla can grow in even crappy builders soil (quote!). The plant can be lifted and moved but don’t divide it as you will kill the plant. Once planted, the crowns will lift themselves up. This is an F1 variety so whilst the seeds from the 1st year might come true they will not do so in following years. Put grit on seed to stop it from flying away. Seed won’t germinate straight away, it will probably germinate the following Spring.

Geum ‘Bell Bank’ has pink nodding heads and like other Rivale species like being wet in full sun.
They are easy to lift and divide.

Geum Totally Tangerine (a photo of Rosy’s plant below) is a very reliable form that doesn’t stop flowering if you dead head correctly. It is usual with deadheading to just remove the flower, but with Geum you remove the whole stem from the bottom; more will grow. This one gets taller stems as it continues to flower and can reach 4-5 ft by the end of October. The flowers are sterile which is why it continues to bloom. To divide you can split off a rosette; do this in Spring.  It can be grown in a container (my question answered) in moderate soil. Just make sure it is a decent sized container and the plant can get to a good size over the year. 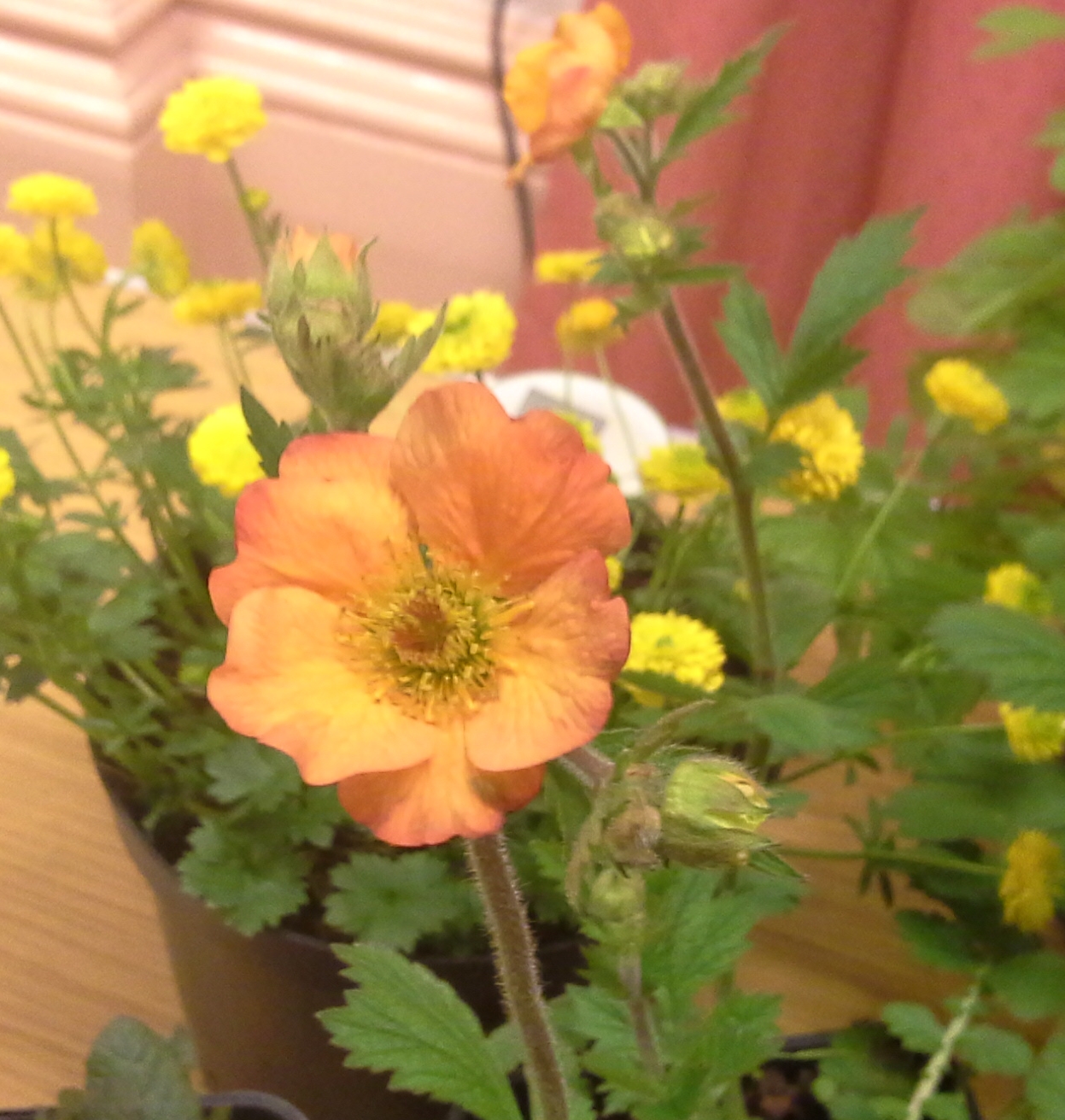 Iphieon are bulbous plants, though not bulbs per se. They are highly scented and like dry soil. Iphieon don’t mind the cold but do not like it wet. They can be grown in containers but it must be in gritty soil. Like bulbs the foliage dies off in summer and comes back late Winter/early Spring.

Doronicum x excelsum ‘Harpur Crewe’. The excelsum varieties are the hardiest. They can grow to 2.5 ft making them one of the few taller plants for this time of year. Harpur Crewe is yellow and flowers in May and is happy in both sun and part-shade. The can form big clumps, from 18 inches to 2ft within in a couple of years.

I had already ordered several plants I wanted in advance of Rosy’s visit, which she brought along. (Tip: Hardy’s appear to be happy to do this if they are coming to a talk, so do ask.) The talk however got me excited about more plants, and I admit to picking up a couple more including Geum Totally Tangerine which I’ll pot up for a long flowering display for the front garden, and Pulsatilla vulgaris Blaue Glocke which I’ll be potting on and putting on my new display area, of which I’ll blog about some other time.

Rosy is a font of knowledge on hardy perennials and an engaging speaker, and it goes without saying that I learnt a considerable amount in the, only(!), one hour that she talked. If you are looking for plant advice or a speaker for your garden group, I highly recommend Rosy and Hardy’s Cottage Plants to you.