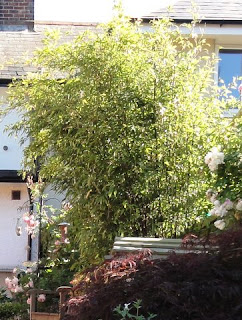 Since undertaking the Permaculture Design Course last year, my confidence in trying to make my own objects for the garden has increased. I’ve also got better at noticing how I can increase the use of the different resources that I come by.

A couple of months ago I pruned the Phyllostachys Nigra, the black stemmed bamboo, above. It was planted quite close to the fence we share with our lovely neighbours Fung & Simon. Whilst they like the bamboo well enough, it was trying to get a bit too close and was pushing out the fence in a funny angle and making it a bit unstable. Furthermore, on our side, it was starting to take up lots of space and block out some light, so pruning was in order.

If you know Phyllostachys Nigra, you will know that the black stems are a lovely shiny black. Bamboo is also quite strong, hence the large number of imports from China to garden centres throughout the UK. In general, I don’t buy bamboo canes for staking, I either get hold of some hazel branches, or keep any branches that are relatively long/straight from pruning trees in my own garden. When Kevin and I pruned the Prunus (prune Prunus – ha ha) I collected a large number of stakes that I have been using for anything from growing my French climbing beans to staking Brussels sprouts at the lottie. Hence, rather than cutting up and throwing away the pruned branches, I saw them as potentially useful objects for the garden. Even the smaller stems are drying out and will be used for kindling. So when pruning the bamboo a couple of months ago, with it’s lovely long black stems, I knew I would find some use for them and so put them aside to dry out.

Today I made use of those bamboo canes, making my own trellis. I needed a trellis for a new evergreen Honeysuckle, Lonicera japonica ‘Hall’s Prolific’*, that I am going to grow up the front wall of the Lemony. 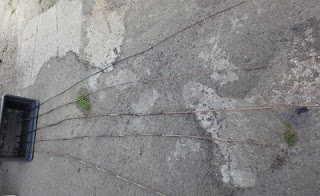 laying out the vertical canes

First I put the container I was going to plant the honeysuckle in on its side, then placed the 5 bamboo canes inside to the bottom. I arranged them into a fan, with the tallest in the middle. I then cut a smaller cane to go across (horizontal) the long canes. Because I wanted to get the trellis to fit in a small space, I used this cane to measure up next to the wall. Good thing, because I had arrange the fan to be too wide. I cut the horizontal cane to side, then arrange the long vertical stems accordingly, starting from the bottom end of the trellis and working up.. 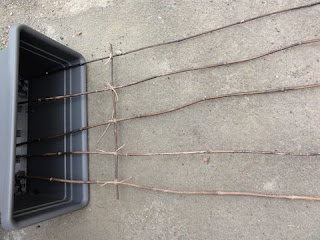 Next I tied the lowest horizontal can to each vertical cane, as above. I then moved up to the top of the ‘trellis’ and tied in the top horizontal cane, below. I did this to help make the overall framework a bit more steady, to make it easier to add in all the middle horizontal canes. 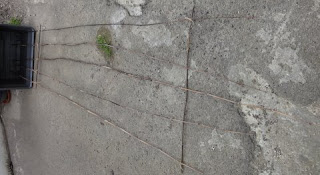 I used string to tied all the horizontals to the verticals and then added a bit of super glue to each knot. The glue was because I don’t think I had the strongest string on the planet and I wanted to make sure the knots held! 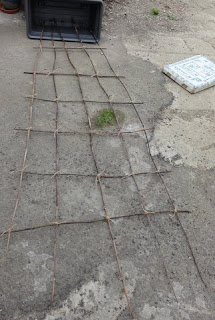 Moving the planter and new trellis upright, I attached a couple of canes on each side to nails coming out of the wall. This is because this area is quite windy and I wanted to make sure it was steady and the whole thing won’t come crashing down. 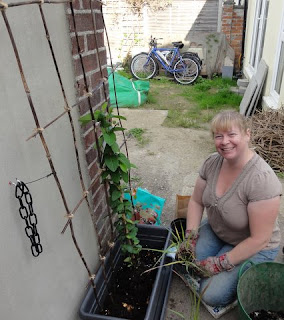 Next was the planting up! Along with the honeysuckle, I added in some spare daffodil bulbs I had drying out from Spring, and some early flowering crocuses, Crocus tommasinianus ‘Whitewell Purple’, one of my favourites. Then to add some further interest for later in the year (since the daffs and crocuses will be for early Spring), I planted up a couple of Pennisetum Red Buttons, a grass seed I picked up from the Knoll Gardens stand when I was at Chelsea this year and have successfully grown into lovely new plants. 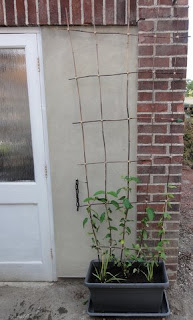 And here is the completed planting with my DIY trellis. At a later stage we will add a couple of rows of wire across the top and over the door so that I can train the honeysuckle along the rest of the front of the Lemony. I should add that I wanted a fragrant evergreen in this place for two reasons. One, a kitchen window looks out directly onto this space, so I wanted something green all year round. Adding the bulbs was to help lighten the spirits with their colour, when it is desperately needed, at the end of each winter. Two, Kevin and I go in and out of the Lemony door all the time, as it is the end when we place our bicycles, so when it flowers next year and in future, we will be able to regularly enjoy the fragrance. This is also next to the entrance to our back door and garden, so visitors will also get to enjoy the fragrance since we use the back door, rather than the front, as our main entrance to the house.

I admit the trellis is no great work of art. But I made it from home-grown resources and it does the job, and I feel rather pleased with it. Hopefully as the honeysuckle grows up the trellis, it will take on some ‘rustic charm’, the string will be hidden and the fragrance will delight all who passes by.

*This was Kevin’s choice and he even paid for it. He now owns a total of 2 plants in our garden!
**That’s my other neighbour, Richard’s garden behind me. He’s not a gardener…