I must say thank you to the weather, for hearing my plea and making the weekend predominantly sunny, or at least,  not very rainy, as it did rain for 1 hour on Sat. My lottie was ever so pleased to see me today.

Thankfully I got there just in time before some of the courgettes started becoming marrows. This particular courgette, verde di Italia, has yielded quite well, though I do have to be quick about getting to them before they become marrows. They taste much better when smaller. As usual, another good variety I got from Real Seeds. 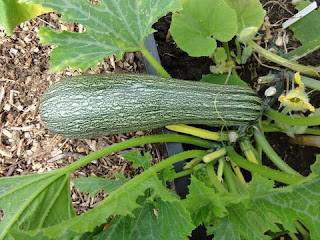 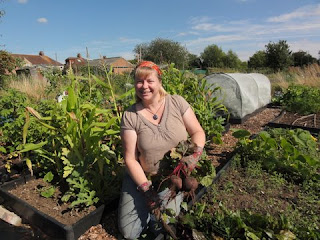 One of them was quite large compared to the others (see right side in the picture below). This was a variety called Devoy, which rather than giving you round beetroot, gives you longer more carrot-like beetroot. This one was quiet chunky. Mmmm, brownies…. 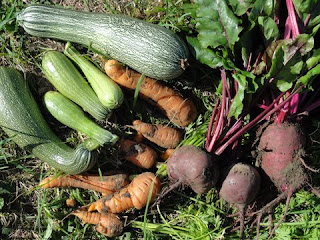 The St Valery carrots were also doing well and taste really sweet, like sunshine in your mouth.

The green manure I sowed a couple of weeks ago is coming along wonderfully. First is the Tares, (with the errant pumpkin elbowing in for some space) which over-winter without any problems from frost damage. I planted the tares after pulling up the garlic. Tares are from the legume family, and fixes nitrogen into the soil as well as improving soil fertility. 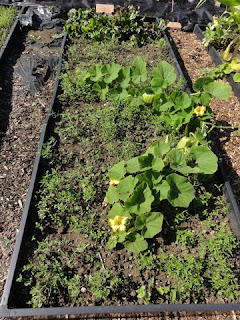 The following bed is a mix of winter salads and pak choi to the left, and Hungarian Grazing Rye to the right. 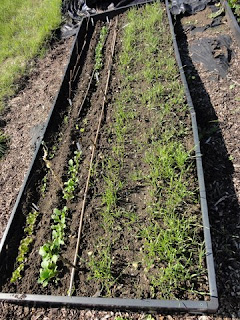 I will be putting a cloche over the salads and pak choi, so carefully marked out the space it will need for when I have to put it on. This will be just before the first frosts, probably in October. Well, hopefully in October and not late September when I’m on holiday in Bavaria!

Because the rye is a cereal it can fit anywhere in a rotation. I thought I’d try it because it is supposed to stop nutrients from leaching, for example, from heavy rains or flooding. Apparently it can really take off and put in deep roots in Spring, so I need to remember to dig it in, in early Spring. Ok braincell, remember that…

You dig in green manure in Spring, at least 4-6 weeks before you want to sow seeds. The freshly dug in green manure can inhibit germination, which is why you need to wait a few weeks to let them break down and release their manurey-goodness before spring sowing can commence. My plan in general, is to have some kind of green manure growing through winter in any bed that I don’t have veg over-wintering, such as my Brassicas, Spinach/Chard and the winter lettuces.

Whilst I was busy harvesting, weeding, and sowing more Spinach, Chard and an overwintering cabbage, Wintergreen, Kevin was working on digging out weeds and preparing another raised bed. 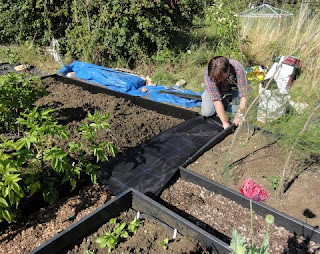 Our great aim(!) is that for a change, next year all the beds for the potatoes will be ready when it is potato planting time (traditionally Good Friday), rather than the desperate rush in mid-late May as has been the case in the last two years! Oddly, the late sowing of the potatoes doesn’t seem to effect the yields, but still, it would be nice to not have rush in May for a change. 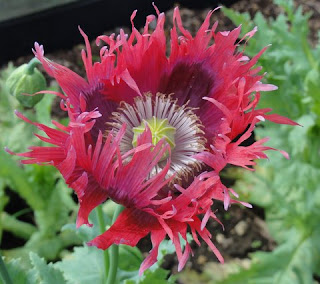 My final photograph is of a poppy that has self-seeded in my spinach/chard bed. Seems a bit late for a poppy to be flowering, but hey, not complaining. I mean – pretty! Ok, perhaps it is flamboyant, but still, pretty…