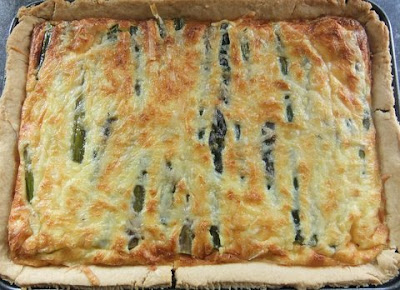 A couple of weeks ago I was lucky enough to win VP’s cook book giveaway. I was excited not just because I won – though that was very exciting – but because this book was the kind of thing I’ve been looking for, for a couple of years.

The Garden to Kitchen Expert (yes, part of the very useful ‘expert’ series, if you ignore their suggestions to use chemicals) has over 680 recipes, covering vegetables, fruit and herbs, plus some jams, preserves and pickles, and some ‘toolbox’ recipes such as how to make a simple shortcrust pastry or white sauce. Each section is in an A-Z arrangement. Helpful for someone like me who likes her vegetable recipes alphabetically. Must be a hangover from working in the OED for nearly 5 years, several years ago… The recipes are also fairly simple, not long complicated instructions with a zillion ingredients, with half a zillion you’ve never heard of. Simple recipes suit because I like good food but don’t always have time to spend a lot of time cooking.

Basically, a gardener has a heap of one veg bursting the beds, say courgette/zucchini, and needs some recipe inspiration for interesting and yummy ways to cook it. For years I’ve been looking for vegetable cookbooks that would have a range of recipes for that one bountiful veg (or fruit etc) glut. This does exactly what it says on the tin.

This isn’t a broad review of the book – I’ve only tried 3 recipes so far. But I like what I’ve tried and I’m keen to try more. Given it is asparagus season it seemed appropriate to start there, hence the picture of my first attempt at asparagus tart. It was also my first attempt at making my own shortcrust pastry, one of the convenient ‘toolbox recipes’.

I have to say it was a great success. It took a bit of mucking around to get the pastry right, but that’s my lack of skill rather than the book I think. But the end result was delicious. Fresh asparagus from nearby Rectory Farm, some eggs, cream and cheese, and voila! And the pastry wasn’t too bad. Maybe wouldn’t pass muster in France, but it was light and crumbly when you bit into it, and the asparagus was still slightly crisp and wrapped lovingly in the egg, cream and cheese.

The other asparagus recipe was Asparagus Risotto. Up until now I’ve used the Abel and Cole recipe, so I was interested to try a different version. I think I like this new version better, though the other is delicious too, as this one has no cream and not so heavy.* I very lightly steamed the asparagus and it was crunchy and mixed well with the white wine, stock and butter. Ok, butter is heavy, but not as heavy as cream to me! 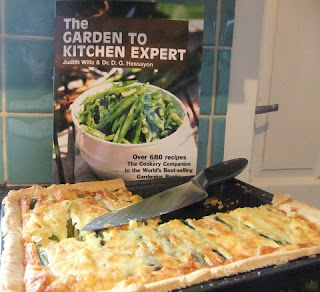 This cookbook gets the big thumbs up and I look forward to trying more recipes as the growing and harvesting season goes on. Thanks to VP for my very tasty winning.

*The Abel and Cole Pumpkin Risotto recipe in the same book is amazingly stunning, the cream and pumpkin were meant for each other.