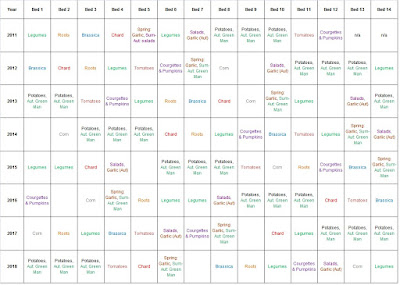 I’ve been spending a bit of time recently working on my crop rotations for my allotment, with the above being the outcome. Perhaps not the most exciting image you have ever seen, but I’m pretty darned pleased with it!

One of the reasons for it taking me ages is that not all the beds are built yet. The n/a for beds 13 & 14 in 2011 is for those to be built next year. However, beds 8 to 12 are only planned this year – so the rotations are depending on us actually digging in. Even if they don’t get built the rotations should still hold.

At least, I hope so. It’s been a lot of work trying to make sure that I’m rotating things in the right order. For instance, potatoes and tomatoes cannot follow each other in a rotation as they are the same family, and I have to make sure that there is 4 years between them being planted in a bed before returning to that bed. I use a 4 year crop rotation as a minimum as part of my management of pest and diseases.

There were quite a lot of other things to consider though when planning crop rotations. You need to be clear on what veggies you are going to grow, so that you can ensure that the same families are planted together. So the beans and peas, the legumes, are together, the parsnips and carrots together, etc. I worked out I had 8 key groups:

I made Tomatoes it’s own group as they take up quite a bit of room, but considered them and the potatoes together when planning to ensure a minimum 4 year rotation. Things like salads can go anywhere (and I’ll mainly be growing these at home as quick growing cut and come again crops), as can corn and curcubits, though for planning purposes they are:

Other thins to consider are what crops should and shouldn’t follow each other. For instance, winter tares (green manure) are rich in nitrogen, which produces strong leafy growth. So they are useful to be sown in autumn to be dug in the following springs, before you plant your brassicas. Brassicas being heavy nitrogen feeders, benefit from the nitrogen released by the winter tares.

However, you don’t want to put potatoes in after winter tares, as you don’t need to feed the foliage of potatoes, rather the tubers of the potatoes, in order to get good sized potatoes. So my plan in general is to sow winter tares in late summer, after I’ve pulled up the garlic crop. The tares will grow from autumn to spring, you dig them in, in spring, a few weeks before you plant out (or sow direct) your brassica seedlings.

So that’s some of the thinking behind my crop rotation plan. You can download the spreadsheet if you like.

Finally, is there an actual lottie plan to match the crop rotations? Of course there is… 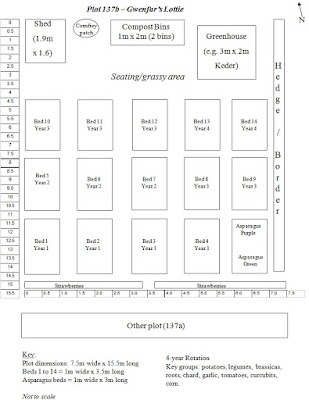 Lastly, the shed, comfrey patch, compost bins will hopefully be built later this year, after beds 8-12 have been built and we have managed to win the war against the brambles and bloody couch grass. The greenhouse is my dream to help extend the season and give more more to chose from in winter. But it will probably be a couple of years before we have sufficiently destroyed the brambles and couch grass that are currently in its place. I’ll be giving that area the old black plastic treatment. Oh, and a couple more years before I can afford to buy a greenhouse anyway.

Ok, this has probably been my most boring blog ever to anyone but me. But it feels good to have got the rotations and design done and it’s my blog. So, well, ner.  😉