With my back much improved and the sun shining, Kevin and I got down to the lottie on Sunday. It was well and truly time to get the green manure beds dug over, which is what Kevin is doing here. 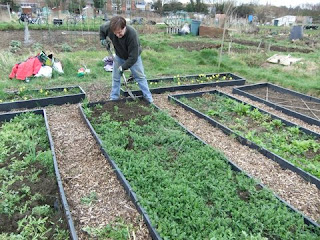 This is Vicia sativa (winter tares) which I sowed late last September. It’s hardy, it survived a couple of feet and several weeks of snow, and it’s a nitrogen fixer. Digging it in, I’ll leave it for a few weeks to rot down and release the nitrogen, and will then be planting my brassica’s in this bed. Brassicas are nitrogen hungry, so hopefully this will help them grow big and strong. 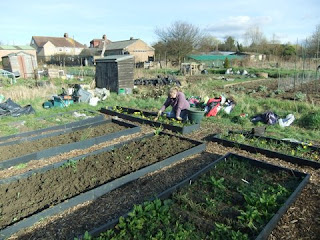 Whilst Kevin was digging in the green manure, I was trying to rescue my strawberries from encroaching couch grass. I also grow narcissi with my strawberries, so I have some early spring colour to lift the spirits and make me feel the growing season is really starting. 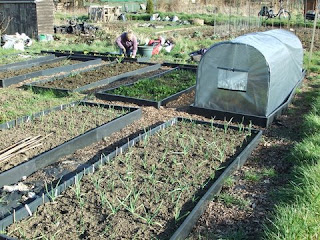 The garlic is coming along nicely, as you can see here. Over winter, I have been trying out the many different varieties I harvested last year. Some, such as Irkutsk, are way way WAY too strong even for me, and I love garlic (no, really?). We used a quarter of a clove in an omlette and it was not only overpowering, we had garlic breath for days! Most aren’t that strong and it’s been fun trying them out in key dishes (ie. pasta sauces) to see what difference each makes. I’ll update the garlic varieties record sheet in the next month or so, which will include how they are storing. 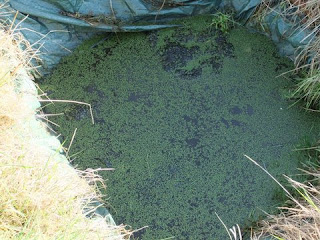 The lottie next to us has an unintentional pond. An ‘unintentional pond’ is a hole that started as a, well, hole, and then started collecting water and then frogs started spawning and so then Tess, the lottie holder, decided to more intentionally turn it into a pond. The black clump to the top middle-right is this years frog spawn. We do get lots of frogs around our beds, which is great as they eat the slugs. However it can be a little nerve-wracking at times, nearly putting a fork into a froggie! I try and return them to the pond, however they don’t seem to get the message and it’s an ongoing saga. In summer the pond can dry out a bit, so we help out adding water to keep the frogs from being parched. 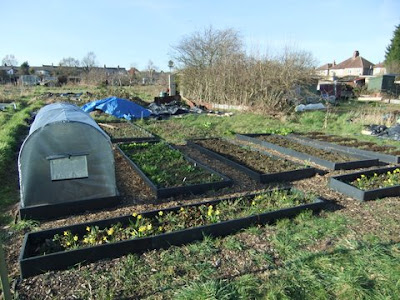 By the end of a couple of hours work, the green manure was dug in, I rescued most of the strawberries from couch grass, gave the asparagus bed a bit of a mulch (furthermost right), and got up my new polytunnel. At the moment this is over the broad beans to help them along a little, but mainly it’s going to be for the brassicas. It will protect them from blasted pigeons and the dreaded white cabbage moth. Learning from previous experience, I’m going to mollycoddle my brassicas and keep them protected all year round. It will be me eating cauliflowers, cabbage, kale, brussel sprouts and broccoli and not the naughty beasts!