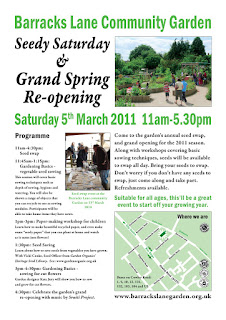 Over the winter I’ve been very busy planning events for the coming season at Barracks Lane Community Garden. We have exciting plans for a variety of workshops over the coming months, such as making willow plant supports, plant swaps, foraging workshops, as well as our annual Harvest Festival in September. First up though, is the reopening for the season on 5th March, and we are starting the year with what is now the 6th annual seed swap at the garden.

Ours is a ‘Seedy Saturday’, rather than a traditional Seedy Sunday, but the idea is the same. People can bring along their spare seeds, or seeds they have saved themselves, and swap them for other varieties. I’m bringing along a few packets of my favourite pea, ‘Latvian’ to swap.

We are also running free basic gardening workshops on seed sowing. I frequently met people at the garden last year who were keen to get growing, but expressed an interest in learning more about some of the most basic things, like how deep do you sow a seed, how often do you water, etc. So that sparked an idea that I should include some gardening basics workshops when I organise the seed swap this year. We are going to also be having a plant swap in May, and I’ve also planned some follow-on workshops on potting up and planting out for that event.

On top of all this, we also have Vicki Cooke from the Heritage Seed Library coming along to give people an intro talk on seed-saving. Having heard Vicki speak on the subject a couple of times, she speaks accessibly and with enthusiasm, and along with her wealth of knowledge I’m hoping it will encourage a more people to start saving seeds. It will be both a skill and necessity in the coming years as climate change really kicks in and effects the growing seasons, and what we grow, more and more.*

So if you happen to be in the Oxford area on 5th March, do drop by the garden and come and pick up some new seed varieties to try!

*If you want to know more about why saving your own seeds and having local seed networks is important, Patrick over at Bifurcated Carrots is the place to go… it’s the place I go for my’ seedy news’.