Last weekend we were in Cambridge visiting Audrey, and the three of us ventured out to Audley End to enjoy some late autumn sun and see the gardens. As you will see from the photos, the sun disappeared by the time we got to Audley End! However, it was lovely to be out, even if it isn’t really a winter garden.

I was most interested in Audley End because of the Kitchen Garden which is run by Garden Organic, of whom I am a member. Of course, it wasn’t exactly the right time to see a kitchen garden, being the end of the growing season… 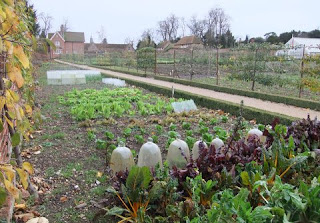 So I’ll clearly need to go back in summer. I still found some things of interest though. I was fascinated to find some apple trees that still had all their leaves on, like it was early autumn and not nearly the end of autumn. 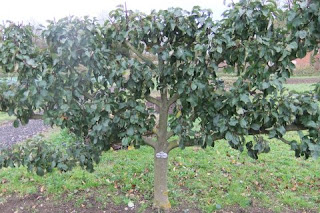 This is a Wanstall Pippin, c. 1800s. I don’t know anything about why it still had all it’s leaves, when almost all other apple trees had lost theirs.

I was also intrigued by the clearly very old grape vine. It’s base and roots were growing on the outside of the greenhouse, with the rest of it, ie. the fruit-producing parts of the plant, on the inside. 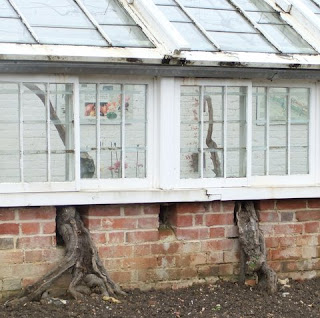 Turning to the rest of the garden (ie. non-kitchen) at Audley End. I’m not someone who likes topiary. As someone who is a bit of a control freak, topiary is an step beyond even my control freaking ways. There is something about the deliberate attempts to squeeze nature into oversized representations of rabbits and Roman columns that I find a little frightening. Some would say all gardening is an attempt at controlling nature. There is some truth in that, but good gardeners, in my view, work with nature, not torture it. So given my opinion of topiary, it was interesting to see Audley End’s interpretation of a hedge-come-topiary. 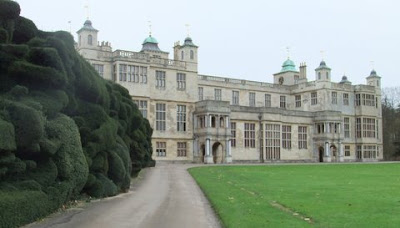 Although I wouldn’t want it in my house (ok, the hedge is bigger than my house, and garden…), I found it interesting, kind of arty and tactile, in the way it’s been shaped. It’s not quite topiary, but it’s more than a hedge. I’m not quite sure what I think, to be honest, but it didn’t bring a chill to my bones, which is what topiary usually does.

The parkland at Audley End was designed by, yawn, Capability Brown. I have little time for the 18th century landscape movement, of which Brown typifies. I’m sure admitting to dislike of Brown and his ilk is probably sacrilegious amongst much of the English gardening world, but there you go, so be it. It bores me. Stowe – big yawn. So it’s not surprising that the part of the garden that I really enjoyed (outside the kitchen garden of course), was the Elysian Garden. I suspect that was because it was the most ‘natural’ part of the parkland.

At one end of the Elysian Garden is the ‘Temple of Concord’, seen here graced by Audrey’s and my presence. 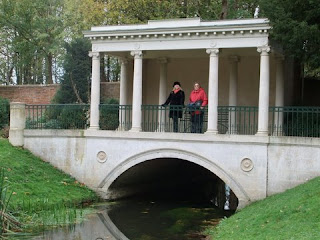 However, it was the stream and autumn leaves that really appealed. I suspect this is because it could be a view of any pretty part of the English landscape in autumn, that I love. 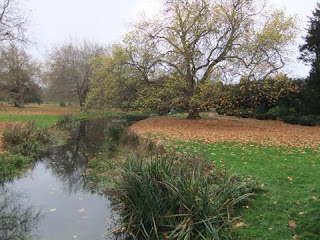 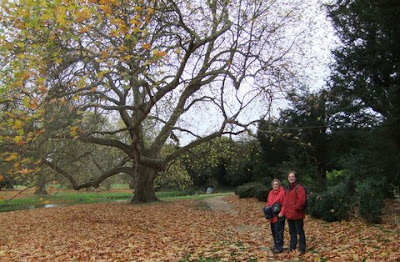 What is it about autumn leaves that is so beautiful?

Behind the house, (or is it the front?), is the parterre. I read it was a must-see, but I didn’t feel that way. I think the beds of not-yet-flowering polyanthus rather put me against it. I don’t like polyanthus. Give me primula vulgaris any day. I think they really should add some plants with structure to help hold interest during the late-autumn and winter months. Under the bluey-grey sky I found it a little bleak and flat.

The verdict. Apart from the ‘interesting’ hedge, and the ‘natural’ Elysian Garden, I found the parkland rather uninspiring. Though that’s not surprising given I’m fairly anti-Mr Brown and his lot. However, even at the end of season I still found things of interest in the kitchen garden and I do want to go back and see it in summer. They grow quite a lot of heritage vegetables and I would be interested in seeing them in full bloom and fruiting.

I picked up a couple of very interesting looking heritage pumpkins/squash from the Audley End shop. The shop sadly didn’t know what varieties they were, so I’ve taken photos of them and will send them to HSL for identification. I’m going to make lots of yummy pumpkins dishes, gratins, roasted, soup, and will save the seeds and try growing them myself next year. 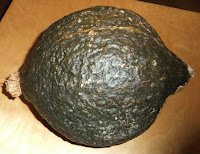 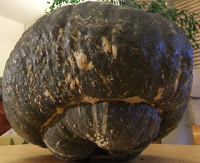 Despite the parkland and parterre, the final scene as we were leaving, was quite peaceful, and reflected the point that we did have a very enjoyable few hours walking around Audley End. 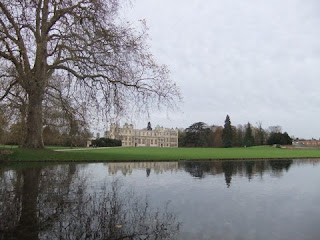