It was unbelieveably hot last weekend. Still, the taties just HAD to go in, so Kevin and I slapped on sun factor 50 lotion and silly hats, and went down to the lottie. Mark (co-lottie partner) and Jenny (Mark’s partner) were already there when we arrived getting their taties in. Nice to know I’m not the only late one.

I gave my silly hat to Jenny to wear for a while. Stylish huh. 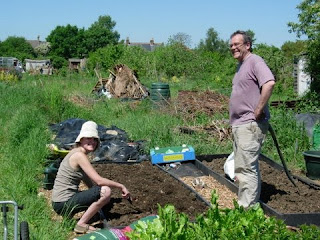 We sweated away in the burning sun, but darn it, we got those taties in. Finally.

I got a bit of a shock really, because I’ve not been down to the lottie for a couple of weeks. Everything had grown. Just look at the garlic! Oh, and Kevin in his silly hat. 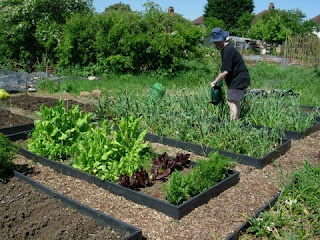 The red veg is a red Romano lettuce. It’s a great colour, and stays crunchy even a day or two after you have picked it and made up a large bowl of salad. Bonus.

Because of the warm weather, the spinach is now bolting, so I need to pull it up and sow some more. Once it bolts it becomes bitter. It’s like the plant is protecting itself and saying, hey, I want to set seed so to stop the bloody human from constantly picking my leaves I’m going to make myself less tempting. Well, that’s fine spinach, it’s lettuce eating time anyway. So there.

The bit of empty earth is where I’m going to sow some carrots and parsnips. I was going to sow them on Sunday, but the heat got just too much and we were wilting, and decided heading home for a cool drink was a better move. Before we left, we finished off giving some of the plants a drink too. As you can see, I’m quite the fashion statement at the lottie. Oh yeah. 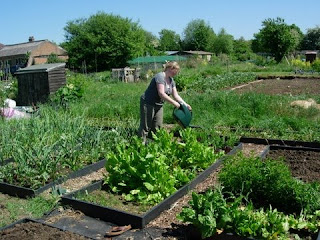 Where to old clothes go when they are dying? Down the lottie.