I’m a bit behind with the blogging. We actually finished the front garden 2 weekends ago, but have been so busy with other things that I didn’t have a chance to show you the final result. Firstly, the ‘before’ photo, from March 2009. 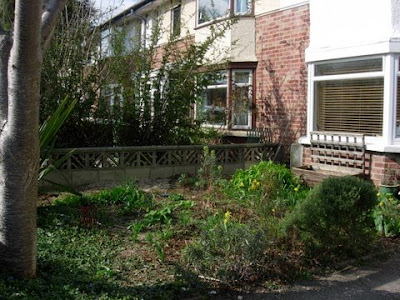 The front garden previously had no structure, ie. no paths so walk anyway meant standing on something growing, very random planting, some nice plants, some I wasn’t so keen on. As it is south facing, I knew it had the potential to be more productive and attractive, and hence the redesign.

And here is the final layout of the new design. 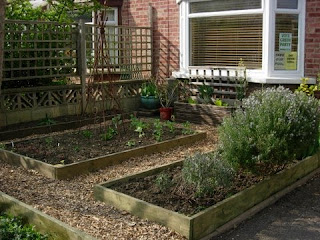 Clearly I haven’t done a lot of planting yet! I kept things like the rosemary and sage bushes, and dug out a lot of bulbs which I put temporarily in pots; I’ll replant them in autumn. There is a bed all around the edge, ie. with the Frances & Simon, our neighbours front garden, and along the sidewalk. The trellis is for the pear trees that you can barely see as they are only one year old maidens. I will be growing these as espalliers so the trellis is for training them as they grow.

The middle bed has broad beans, towards the house, and some lettuce at the front end. I’ve scattered some eschscholtzia californica ‘mikado’ (californian poppies), calendula (basic marigold) and cornflower ‘black ball’.  In the middle of the obelisk is Helenium ‘Moerheim Beauty’ which flowers after the poppies and cornflowers.  I’m hoping ths will be a warm contrast of yellowy-oranges and dark auberginey-blacks over a few months.

I’m finishing with a arty picture I took of the Prunus early evening yesterday, looking up through the beautiful flowers and reddish-green leaves. Just so pretty. 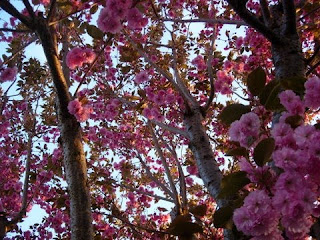