Despite the weather at the beginning of Easter being utterly crap for most of us in the UK, it slowly improved and in the end Kevin and I got a lot done in the garden.

Firstly, the back garden. Though tradition dictates that you plant your potatoes on Good Friday, that wasn’t going to happen this year for too reasons. One, none of the beds either in the garden or at the lottie were ready. And it was bucketing down with rain all day, probably to the disgust of my friends in drought-stricken Melbourne.

However, the skies improved and we got a few hours of the magical sun shining upon us. Honestly, living in England has taught me why ancient peoples used to worship the sun. It also explained why when I first lived in London in 1992-4, I found the moment the sun came out English people would rush outside, and in many cases, strip down to 35 degree clothing when it was only 15 degrees. I get it now. Hey, I’m one of them. Well, I rush outside, I’m still not sure about the stripping down though. I think English people are tougher than ex-Aussies. 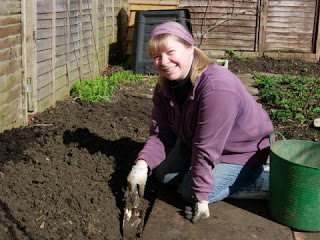 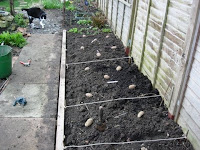 So, the taties. Here is a cheery photo of me preparing a bed, and then Merlyn coming along to inspect the work. I’ve only planted the 1st earlies so far, Red Duke of York, Pentland Javelin, Linzer Delikatess , plus Will, which is an unknown.

As usual when digging in the back garden, I was visited by my very friendly robin who gets incredibly close, like only a foot away from me at times. I’m assuming it is the same one as they are territorial. I guess it knows that when I’m in the back garden, I make it easy for the robin to get some quick treats. Isn’t it a cutie patootie! 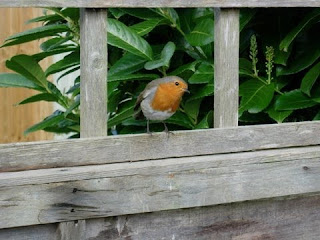 The major work of the weekend was in the front garden. which I am redesigning. And I must make it clear, much of the really hard work was done by Kevin. 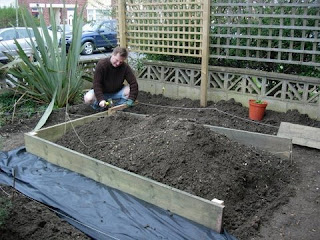 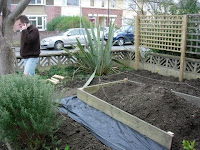 Even though he is incredibly busy getting lots of Green Party stuff sorted for the upcoming local elections, ie. fielding phone calls mid-digging,  he also found time to do some serious raised bed building. Am I lucky or what? I’m lucky. And here is the partially finished result. 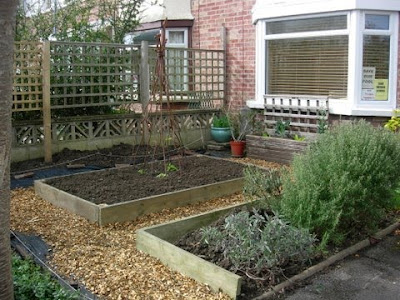 It’s only about half done so far, but a pretty impressive half done if you ask me. See my lovely obelisk in the middle? It will look even better when I have french beans growing up it. I got the woodchips from a local tree surgeon, Dan, who did some work in the garden for me last year. He mentioned he often had lots of woodchips to get rid of, so with a £15 donation to Helen House, I got a massive pile of woodchips delivered which are now paths between the beds. Bargain!

Still got the beds around the edges to do. I ran out of the wood stainer for the last planks, so they will need to be done in another couple of weeks. However, I do have a bed all ready for planting. If it doesn’t rain tomorrow, in will go some broad beans and lettuce. 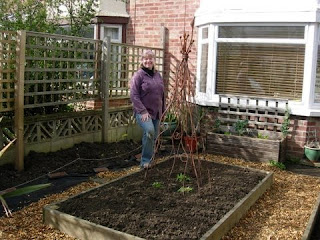 So at the end of Easter Sunday, here is a very happy Gwenhwyfar.

1 thought on “A busy Easter in the garden”