It was all cold and wet for a week or so after my last blog post, but now the sun has come out again and being a ‘balmy’ 6 degrees, just right for getting outside again. In the last two days I’ve been focusing on tidying up the paving area next to the house, in the back garden. Here it is all tidied up. 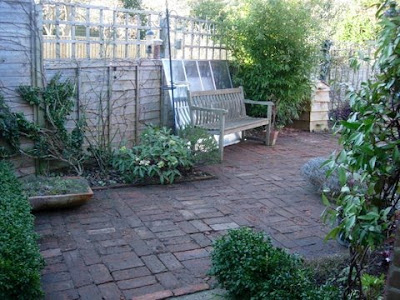 I cannot claim credit for the layout and paving, this was done by the previous owners of the house. Kevin and I rather like it, though there are some things that need amending. Unfortunately the previous owners put the brick paving straight down on dirt, and being north facing, it means that it stays damp in winter, the soil comes up through the cracks and weeds and moss grows all over. It was looking rather bedraggled. The long-term plan will be to raise up all the bricks and put down a permeable membrane and sand, then reapply the bricks in the same pattern. It isn’t a top priority, getting veggies growing at home and the lottie is the top priority, so this will be in a couple of years time.

The picture above is how it looks after I had cleaned it all up. I forgot to take a ‘before’ piccy, but trust me, this is a massive improvement. The other work I did was pruning the fig tree and rose bush, tie up the honeysuckle and plant some Digitalis ‘Pam’s Choice’ to grow up the lemony wall. I still need to move the left over greenhouse parts that you can see behind the chair. They will be going down to the lottie when it’s cleared and will be used as cloches etc.

Given the garden is north facing, making the paving area next to the house the coolest and least likely to get sun, it may seem surprising that we have a fig tree growing up the lemony wall. Does it fruit? Well, yes, in fact it does. It surprised us too when we moved in, but by mid-March through until mid-October the fig gets direct sun, and the lemony, having a perspex roof and thick brick walls, really retains the heat and it makes the wall very warm. Last year we had quite a bit of fruit. Although need to learn about the optimum time to pick them, figs seem to have only a 2-day grace period of when they can be picked before they go over. 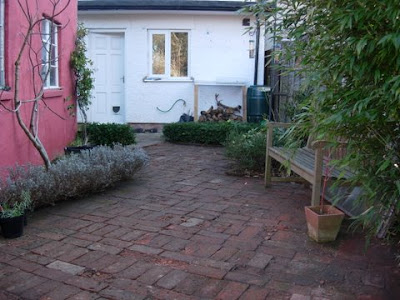 Looking back towards the kitchen, with the fruitful fig
growing up the lemony wall on the left.

So the lemony, what is it? When we moved in, this was a garage. A large garage, but one that was falling apart, AND had an asbestos roof. eeek! Kevin and I wanted to make it a proper storage space for our bicycles, a bit of a work shed for Kevin, and a potting shed for me. After getting the asbestos roof removed professionally (believe me, you wouldn’t want to do it yourself), and the dangerously unstable garage door removed, our clever labourer Nick suggested, why don’t you put on a perspex roof. It’s tough, and will give you lots of light. Yes! Bloody brilliant idea. So the garage door end was bricked up with a door put in, so easy to get our bikes in and out, and the roof turned the garage into a Lemony. Lemony? Well, it wasn’t a garage anymore. But it wasn’t a shed exactly either. I had a small lemon tree which was now happyily growing in the new space and it hit us. Other people have orangeries, we have a lemony. Part potting shed and greenhouse, part work shed, part bicycle store, occasionally wood store (for wood fire), but always with lots of light. A lemony. 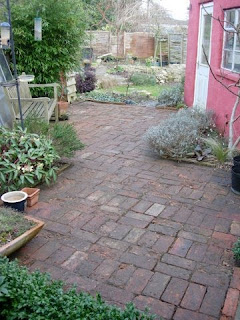 The following photo is a picture from the kitchen wall looking down the full-length of the garden. The paving area being the darker part of the garden, particularly between November and February, has plants like hellebores, including a Harvington double red which I transplanted from our previous residence. I have also planted some more unusual types of bergenia which I picked up when I visited Beth Chatto’s garden with Audrey (Kevin’s Ma) a few years ago. I have Admiral and Wintermarchen, which have delightful purple-red leaves. I’m rather fond of plants in the purple-red range.

In fact one of the delights of taking over this garden from the previous owners is that they also liked purple plants, so I’ve inherited a few lovely plants including the beautiful Cerci Canadensis ‘forest pansy’, a medium-sized tree, stunning in autumn, and a favouite grass of my own, Sanguisorba minor (salad burnet). These are in the circular ‘sunken area’, beyond the paving. I need to do quite a bit of work on this area, not the least being Kevin’s help with fixing some of the surrounding circular stone wall, which is falling down now rather regularly. This area predominantly  has purple and white plants. I want to add in some reds, blues and strong pinks, along with some grasses to help give it structure in winter.

The very back end of the garden, which you cannot really see from this picture, is what will become my kitchen garden. It is where the raspberry canes I mentioned in my last post were, as well as a massive strawberry patch. This end gets sun all year around, so my plan is to redesign it, creating a group of raised beds that will contain salads and other summer veg. The ultimate idea is to put up a pergola along the back wall and grow grape vines up them, with a seat underneath, making it functional and a place of rest.

It’s been a lovely couple of days fixing up the paving area. Listening and singing along to Crowded House and Bic Runga whilst pruning and tidying. Being visited by my friendly robin who always turns up when I’m in the garden. Waiting around to see if I dig up any worms for it to quickly snatch. Tomorrow looks like sun again. I think I’ll head down the bottom end of the garden and get back to digging out more brambles. ouch!