Now that I’ve pretty much finished up tidying up the back garden, I’m finally working on a major redsign of the front garden. This is how it looked about this time last year, not long after we moved in. 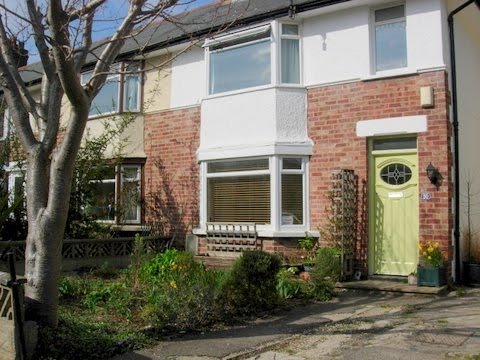 Apart from the planters, which I brought from our previous resident, everything is as we found it. It has some lovely bulbs and good sized rosemary and purple sage bushes, but otherwise was just a piece of soil with some plants dumped in it. The tree to the left is a very large Prunus (flowering cherry). In fact, rather too large and not been pruned in a long time. 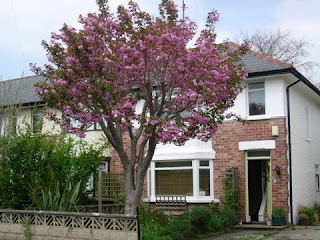 The Prunus actually figured in to how I could redesign the front garden. My original plan was to remove everything, including the tree, so I could make it a vegetable garden with some perennials, as it is south facing and gets very warm. However, to remove the tree would be a major undertaking in practical terms, and perhaps a shame given how beautiful it is, as per this picture from April 2009. So I wasn’t sure what to do. 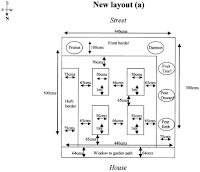 Speaking to a local gardener, Susan Heeks, who lives up the road from me, she made me realise that my first design (A – not to scale. I cannot do scale!) was way too complicated with too many raised beds, which meant lots of paths and not much space for planting. I was also trying to fit in too many fruit trees. On top of that, with the Prunus so large, its roots would reach quite far and make it difficult for growing veggies particularly as they needed lots of nutrition which the tree would be using up. 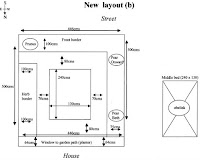 So I had a rethink and came up with design B. In this design, I’ve decided to not make this a veggie garden, as something I realised was that there are many many plants I love (grasses, salvias, heleniums to name a few) and would like to grow and that this would be a perfect space to put them. As they will be mainly perennials and not particularly deep rooted, the raised beds with addition soil should give them enough ‘breathing space’. Also, I’ve made the plan much simpler, with one central large bed, where I’ll put my beautiful obelisk, which if you click on the link, you will see is also a sculptural piece of art in its own right. I saw this at Chelsea Flower Show several years ago and was excessively enamoured, to the point that I kept talking about it and Kevin got the hint and brought it for my, I think 39th, birthday. I emailed him the web link to be helpful…

I will still grow some veggies and salads in the front, but mainly shallow rooted ones, like lettuce, kale, chard and French beans. I’ve just bought Alys Fowler’s new book The Edible Garden, which encourages you to grow veg and salads with your flowers. I haven’t got far into the book yet, so will have to report on it later. Suffice to say, lots of inspiring pictures.

The damson tree has been moved to the back garden, and I’ll move one of the pear trees up so they both have more room. I’m keeping one of the rosemary bushes (the other I’m giving to my neighbour, Frances) and the sage. Everything else is going, apart from the prunus.

So, here is where the garden is at… 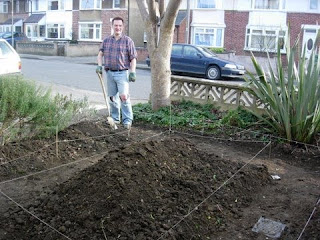 Thanks to Susan Heeks for digging out most of the plants*, and of course my Kevin for then digging the paths and beds that you see above. I’m now in the process of ordering some old scaffold boards from Oxford Wood Recycling so we can build the beds. Then I can get onto the best bit, the planting!

*when it comes to serious digging, I try and get help and thereby make my visits to the chiropractor less frequent.

1 thought on “My front garden: the new design begins”