Well it’s 2010 – happy new year to you! I hope you enjoyed a good winter (or summer) break. As someone who cannot stand Xmas (or sit Xmas either), I choose to view the forced holidays as a time for a quiet winter break. A time to veg about watching bad television and films, reading good books, and with some luck, catching up with a few friends. And that’s pretty much what I managed. However, I also managed to include a bad chest/head cold that stayed with me throughout the winter break. ugh! Kevin had it even worse, starting before the holidays and carrying on the whole way through, so double-ugh! for him.

First up was a visit from Kate & Simon and their two boys, Sam and Alexander from Bonn. We hadn’t met Alexander before, so it was lovely to meet him. And what a cheery little boy he is. 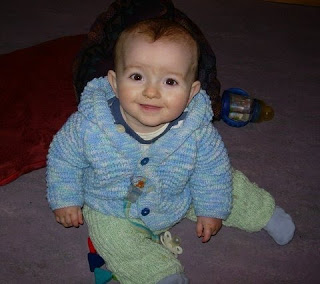 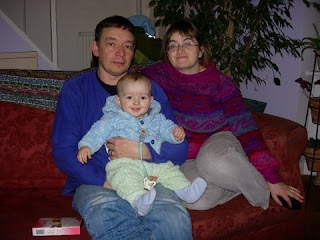 And here is young Sam, enjoying Shaun the Sheep, the only child-friendly item I think in our whole house! 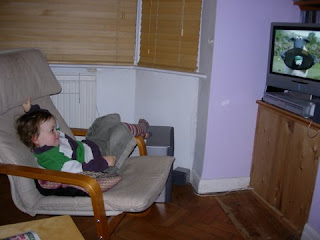 With Sam being busy giggling at Shaun’s antics the adults managed to catch up a bit and eat brownies.

About this time Kevin’s cold hit and the poor boy was home sickly. I was fine though and worked up until 24th Dec, then, BUGGER, I got the cold too. I know partners should share, but you don’t have to share everything. Really.

So the next few days were very quiet. The days were beautiful, with lovely cold English sunny winter days, and we couldn’t bear being inside even though we were feeling quite crap.  Kevin’s mum, Audrey, had left us her car whilst she was over in Denmark visiting Tamsin (daughter) and Troels (Tamsin’s partner), so though we were feeling cruddy, we decided to take a short drive through the Chilterns, south of Oxford. It had been snowing a few days before, and the hills were still covered, snow sparkling in the sun.

I managed to capture the late afternoon sun in a photo at Ewelme (pron. u-elm). 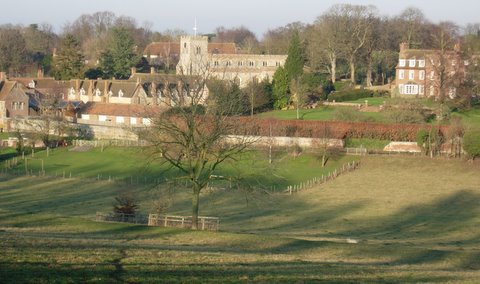 I love England in winter. In many ways I think it is when England’s gentle beauty shines through best. Yes, it can rain and we do get yucky grey days for days on end. But I often think all the who-ha about the crap English winter is an exaggeration. Much of winter can be cold crisp days with blue skies, perfect for walking through the countryside, or even in city parks. You don’t get hot and bothered like summer, and there is always a lovely warm pub somewhere along the way. And in England, it is ok to ask for a cup of tea in a pub. You don’t get laughed at for requesting tea like you do in Oz pubs! So walking in the sun through gentle countryside with friends/loved ones, with a friendly publican welcoming you with a hot cuppa. What else could you want? 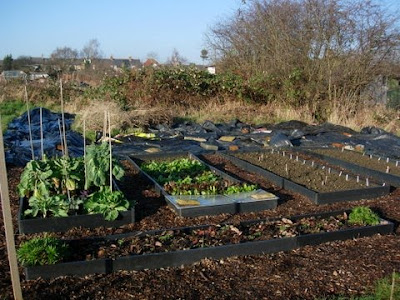 We also visited the lottie to see how it coped with the recent snow and icy days. Nice to see that even all that didn’t kill off my winter lettuce ‘winter density’, that my spinach and chard were looking good, many more of my broad beans had come up. No sign of the garlic yet, though I’m not really expecting to see any shoots until mid-Jan or so. The late carrots I sowed, d’Eysines Large Half-Long, were doing well under the make-do ‘cloche’ I put up.

I used some perspex from an old broken mini-greenhouse we found when we moved into Cornwallis Road and it has done the job nicely.They are looking healthy, have plenty of air but not getting covered by snow and ice, and so far I cannot see any slug damage. I’m growing these ones specifically to save the seed from; my first attempt at saving carrot seeds. Bit tricker than peas and beans as you need to make sure they are pollinated, but not cross-pollinated by other carrot varieties, including wild carrot ‘Queen Anne’s Lace‘ which flowers at the same time. I’ve found Carrot – d’Eysines Large Half-Long to be a very reliable variety, good germination and good tasting, and Real Seeds, who I got them from, don’t have much seed at the moment. I met Ben from Real Seeds at the Oxford seed saving event and he inspired me to have a go at saving the seeds, so hence this attempt.

We then had a couple of more days at home watching bad films, such as the original Day of the Triffids. Kevin and I thought it would be fun to watch again, however, going back to some films you loved when younger isn’t always a good idea. It made us realise how badly acted, sexist, and silly, it was. Basically, plants get big, start eating humans, lots of silly women screaming (I bet they were hired just for their ability to scream) and being rescued by brawny men who saved them from the big bad plant. I forgot early sci-fi was so sexist. sigh.We did also watch some good old films to though, Guess Who’s Coming to Dinner still a delight to view, and still quite relevant.

Then, with hacking coughs and a bad case of sniffless (sniffles with extra sniff), we ventured out once again, this time to Stow-on-the-Wold with Jackie, who was also starting to get a cold. ‘Wold’ comes from Old English, ‘wald’ meaning “high ground cleared of forest” (so says my English Place-Names book). And yes, Stow is on top of a very big hill. A very pretty Cotswold town with a large number of tea shops, which of course one is obliged to enter and partake of the victuals therein. YUM. We might have felt unwell, but be buggered if we were going to miss out on cake. Marie Antoinette was on to something…

Speaking of cake, I managed to do a bit more baking. My first attempt at Victoria Sponge cake, with clotted cream and damson jam in the middle. And being from my gluten-free veggie cake book where I got the brownie recipe, this one had a vegetable in it too. Can you guess what it might be? (ans. at bottom)

The ‘lucky’ recipients of the latest baking attempt was Mau & Hetan, who we visited in London on 30th Jan, and got to meet their lovely new daughter, Keya, who was born just a few days before my birthday. What a cutie-patootie huh! 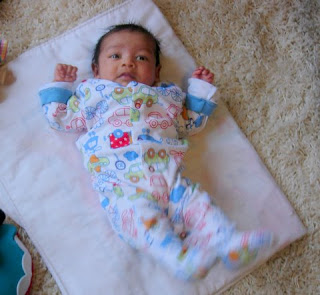 She is kicking with her leggies very fast, obviously keen to get going in the world.

We managed to sleep through the new year. We were invited to Jenny & Mark’s (lottie buddy) but were both feeling so utterly crapola we didn’t have the energy to stay up that late. How pathetic.

Mau & Hetan have loaned us the first 3 seasons of The Wire, and you can probably guess what we spent out last few days of holidays doing… Apart from a slight excess of swearing (even for me, and I swear a lot), it is a brilliant show. I’ve heard so many people talk about it, so great to finally see it. I don’t like many US detective/cop shows, other than Bones, as they don’t usually have the subtlety, dialogue and good story as British ones (ie. Inspector Morse, Lewis, Prime Suspect, Taggart -a fave, love those accents!), but I have to say that I’m definitely a fan of The Wire.

So, we are starting the new year getting well, relaxing and enjoying some bright sunny winter days. Back to work tomorrow, my last three weeks at INASP. I hope you enjoyed a good winter break and are enjoying a good start to 2010. Happy New Year.

Answer to mystery vegetable in the Victoria Sponge: potato. I used ‘Stemster’, one of my absolute favourite varieties. Reliable, large potatoes, high yielding, and good all-rounder (ie. baking, frying, mashing etc). The cake turned out lovely and moist, and pretty light. Just what a sponge cake should be. Going to be baking that again soon.