I didn’t make it to London for The Wave. Bollocky bollocks. My back has been bad recently so I was banned from going on the grounds that it was just starting to get better and therefore I was told that I couldn’t risk sitting in an uncomfortable bus for hours and standing around for hours (because there is always lots of standing around before a march ever gets going…) and putting it out again. Hummm. Of course, the person who told me I should be sensible and stay home got to go and have all the fun. So since I cannot report anything, over to Kevin to tell you about it.

First, here is a groovy pic of him imitating a Pict. Actually everyone was pretending to be Picts, what was that all about? Oh, it was suppose to be a wave. ok. 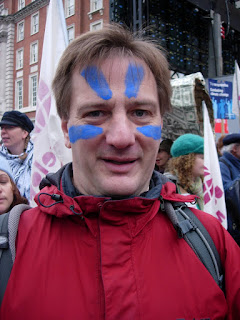 Kevin reports:
I went to the Wave in London to add my voice to many others about our concern over climate change. I met up with World Development Movement (WDM) people on North Audley St before the start of the rally and tried to make sure that other Oxford WDM members knew where I was.

The rally was very slow to get going, and it took well over an hour just to get all of us out of Grosvenor Square. This gave Sam (OxWDM group chair) time to meet up with me with 3 friends of his, plus it gave me time to accept the idea of having my face painted. There were lots of people, plus the WDM Coal monster and a walking Earth constantly looking in fear at the Coal Monster.

It was very loud, with lots of noise being made, and whilst we were stuck in Grosvenor Square there was a sound system with loud music, once out of the square those walking with drums and trombones kept the noise level up, plus the expected chanting of “What do we want” and in this case followed by “Climate justice now”.

Once out of Grovesnor Square we finally started to move along. I got to carry the head of the Coal Monster for a while and I’m sure I’ve ended up in lots of peoples pictures of the rally, possibly even on telly though I doubt the footage taken was that exciting. But the delay leaving Grovesnor Square meant that for many of us did not get the chance to circle Parliament House by crossing the river, it was after 4 pm by the time I got to Parliament Square.

Throughout the day I caught up with old friends and made new ones. I know quite a few of the active members from Sheffield WDM now, and allowed one of them to paint my face.

It was a good day, but whether the goverment was listing or not is another question… Here’s me with the Coal Monster. 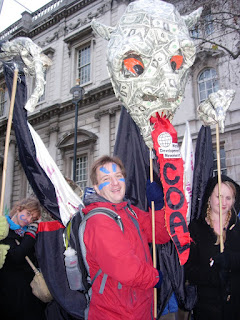