The L-shaped forest garden border along the south (left) and west (right) facing fences, in July, prior to the new kitchen garden beds being created in front.


My forest garden border was first planted out in March this year, and I thought it would be useful to review it’s first season. It’s an awkward border to photograph on whole, so I tend to do it in sections, South (the left side) and West (the right side), which I’ll use to refer to when discussing specific plants. A full plant list is at the bottom of this post.

The L-shaped forest garden border along the south (left) and west (right) facing fences, with the just finished (in August) new kitchen garden beds in front.


I’m pretty pleased with the results from the first season. For a start, the blueberries already started producing, in particularly, Vaccinium corymbosum ‘Hortblue Petite’ on the South side. This was enough to add to several breakfast muselis.

I had put up temporary netting to protect the fruits from the depredations of birds. However, this isn’t an easy way to harvest, at least from an ME perspective, as it uses up more energy than you might expect trying to negotiate the netting and access the berries. So I need to make up a better long term netting set-up. I’m thinking of sewing my own netting cage together, I just need to work out the proportions, based on the size the blueberry bushes will eventually reach (about 1m square). A job for winter/spring.

Temporary netting around one of the young blueberry bushes

The Sorrel bulked up quickly and produced plenty of leaves throughout the season, which I have used in curries and other dishes. And the Rhubarb supplied a couple of kilos of fruit. We added manure around the crown at the end of the season, and will add more in Spring, to feed the hungry roots. 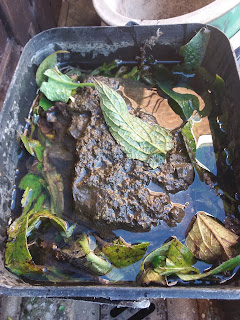 The comfrey has provided it’s first harvest and I now have a bucket brewing (right) over winter that will give me comfrey tea, a homemade liquid fertiliser, to feed both edible and ornamental plants plants this coming season. Comfrey is rich in Nitrogen, which supports leafy growth, and Potassium, which promotes strong stem growth, flowering and fruiting of both edible and ornamental plants. I decided I didn’t need two comfrey plants, so one has been dug up, and an apple tree has been planted in its place.

The apple trees were finally added at the end of November, after I chose and ordered three varieties at the October Apple Day
that I attended. The trees that are all 4-5 years old, and there is a
slight chance I might get fruit as early as next season. Fingers crossed.


A damson has been added to another part of the kitchen garden area.
So not in the forest garden per se, but very close by (like, a couple of metres), so I thought it was worth a mention. I suspect it will be 2 or
more years before I get any fruit off this tree. And I have planted some crocuses and daffidols in the border, so I get some early season pretty and the bees will have some food.

Overall, I feel like I’ve harvested quite a lot for the first season of my forest garden border. I’m not expecting to make any further changes to the planting and layout, so now all the plants can settle in and get growing for this coming and future seasons. And maybe, just maybe, I’ll get a couple of apples next autumn?!

Overview of the south-facing border in December.

Overview of the west-facing border in December