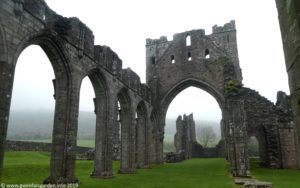 Our recent holiday was in Pembrokeshire, but on the way there we stopped at one of my favourite places, Llanthony Priory (Welsh: Priordy Llanddewi Nant Hodni), in the Black Mountains, between Hay-on-Wye and Abergavenny.

It was a day with really low cloud, so much so that we had to drive very carefully through the clouds, up the single-track road to the priory, where sight was often no more than a few metres ahead. So this is the priory on a darker gray day, which I think gives you some idea what it would have been like when it was first built in the early 12th century.

The building on the left is now a hotel, and has a bar in the monks old cellar.