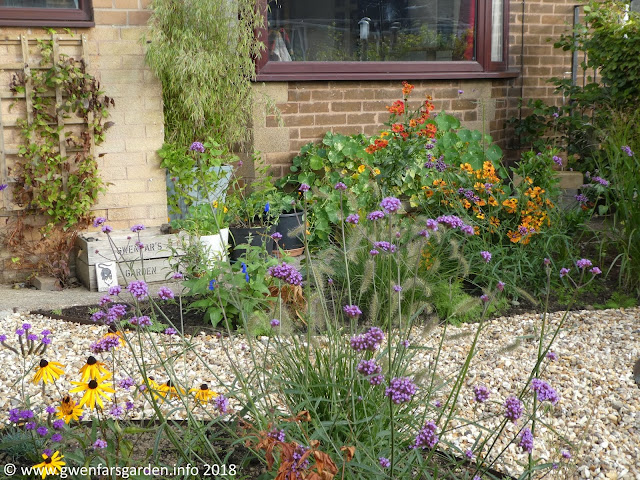 The front garden seems to have come a long way since the landscaping was done in June. 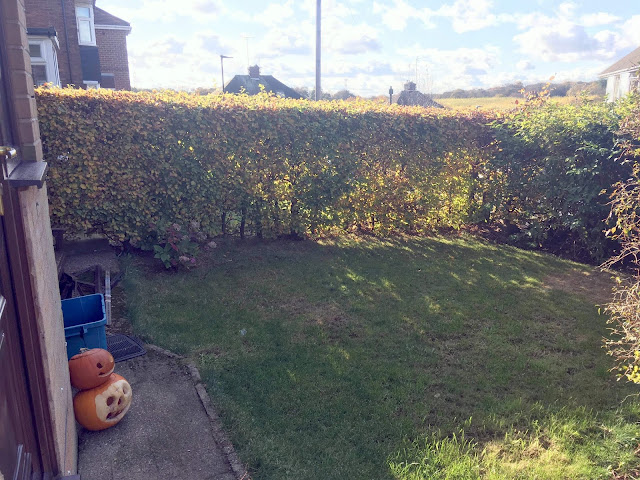 After the landscaping (view from above as I seem to have not taken a photo from the same position as above/below): 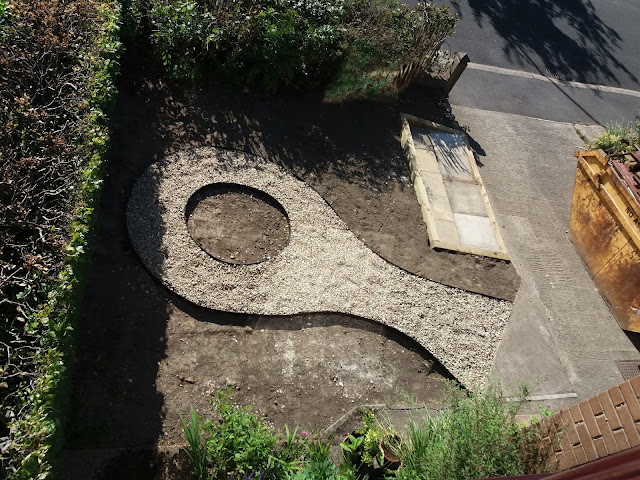 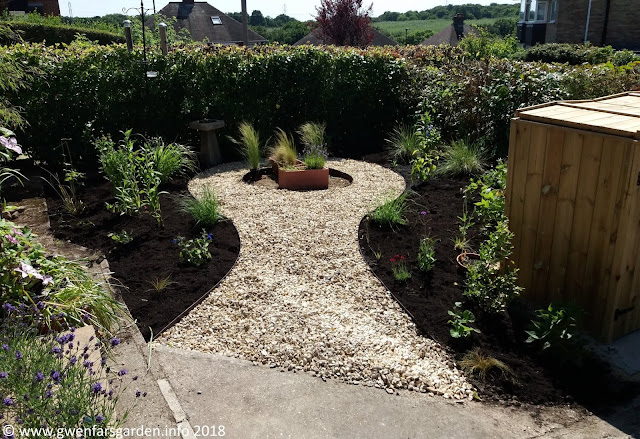 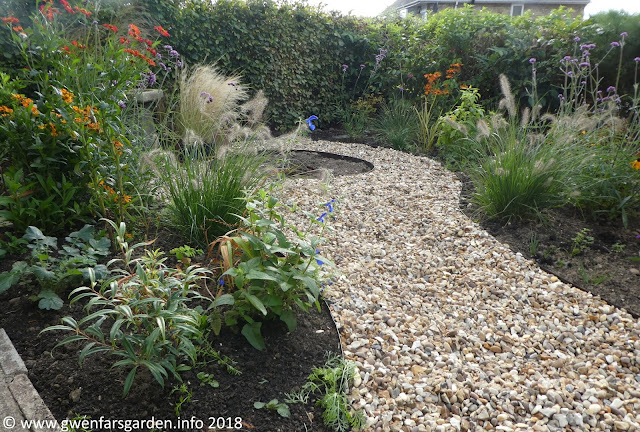 The circle and hole in the middle is because this is where the Quince tree goes when it comes in November. I got the landscaper to dig the hole because it’s extremely hard clay and it made sense to use his muscles! I have four Stipa tenuissima there in pots, to go around the edge of the Quince border, then I will be adding bulbs and and corms, like Anemone blanda blue, Narcissi falconet, and some snowdrops.

The path is for both function and form. It makes accessing different parts of the border for maintenance easier, and I hope it invites you to want to wander around and explore what plants are in the ground. 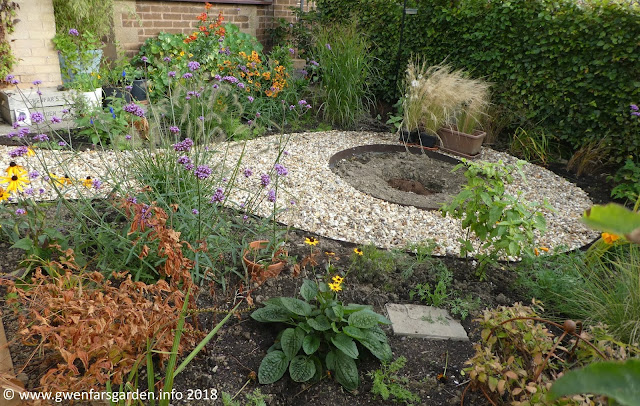 I have added the new Acer Griseum tree. Again, I got the landscaper to dig the hole so when the plant arrived it wasn’t too taxing on my limited energy to get it in. In the below photograph, it’s in the top middle, but I think it’s hard to see if you don’t know it’s there. It’s a young tree but will grow and become much more noticeable. I’ve planted it just where the afternoon sun in winter will hit it to highlight the beautiful paperbark branches (it’s known as the paperbark maple). 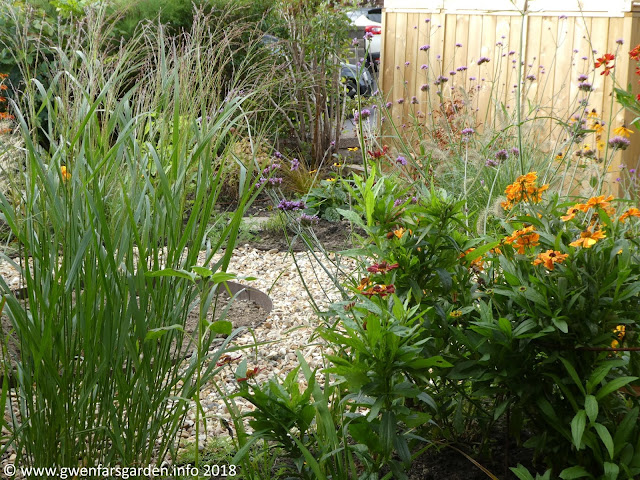 The wooden structure is the bin store. As time goes on the plants will grow around this more. I’ve got some Allium purple sensation to go along here as I thought they are tall enough to stand out well against the wood.

It’s starting to fill in a bit, but I can see some gaps, even allowing for the eventual full size of those plants currently in the border. So I guess this means I’ll have to buy some more plants – what a shame! 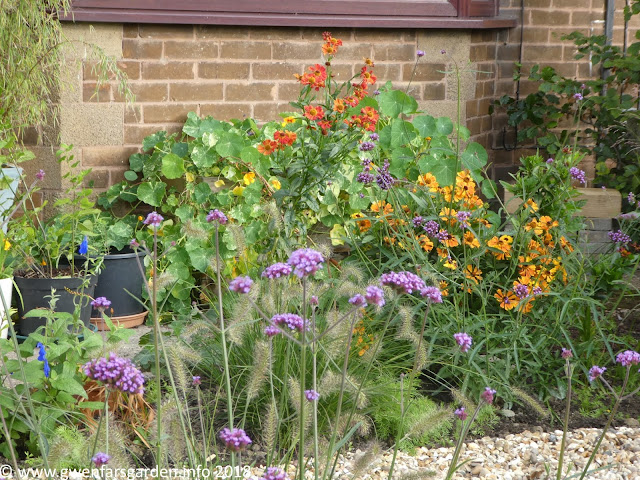 The large planter has three different lavender in it, but they are currently swamped by the nasturtiums, which have attempted world domination. I’m hoping the nasturtiums will self seed around the front garden. Eventually I want it to look like a sunny hot jungle. Well, maybe not jungle, this is Sheffield after all. But the primary colour scheme, reds, yellows and oranges, along with the secondary, blues and purples, should look nice and hot.

Still to go in are lots of bulbs, plus some Primulas, more yellows and oranges. And I think I’ll have to add a couple of yellow hellebores. Along with the different grasses, I’m trying to give it structure and colour all year around. Also planted are two Sarcococcas, S. confusa and S. hookeriana var. digyna ‘Purple Stem’, near the path/front door, so we can savour the fragrance going in and out of the house.

I’m really pleased with how it’s going along. It’s more attractive to me, to bees and butterflies. And to Goldfinches. I daily have flocks, nay, gangs(!) of Goldfinches descend on the bird feeder, which I can see from sitting on the sofa in the lounge room. 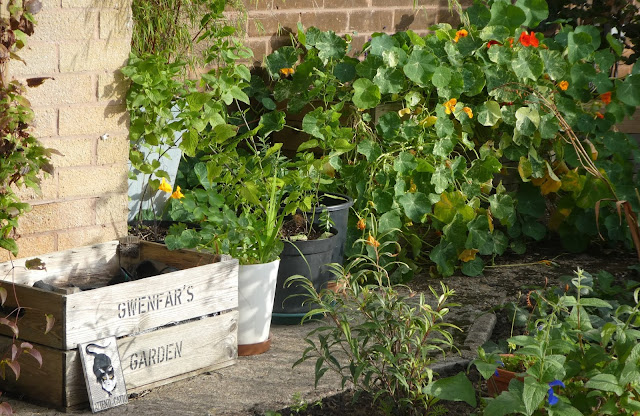 Oh, I really need to add some new plants into the Gwenfar’s Garden box! I’ll get there.