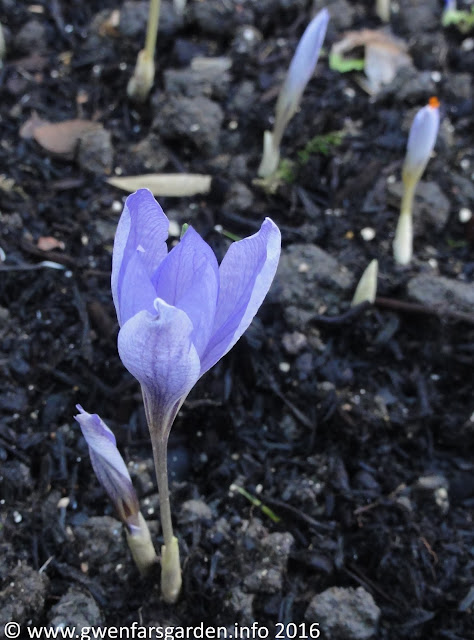 Winter. After a long autumn, long in that often by the end of October it’s freezing but not this year, Winter has arrived. A mild day, more like Autumn. 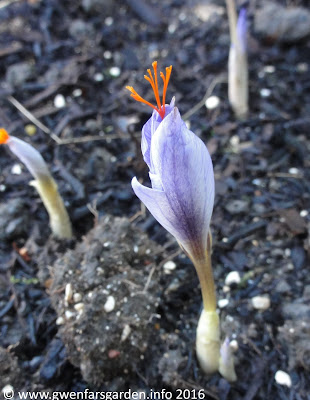 My health has been crap for a while. Crap in that it means I cannot garden crap. Which is the worst kind of crap. I have been getting help from gardener Andrea, who not only dug out and added some curves to one end of my Shady Border, but has been clearing weeds, mulching, potting up, and sadly for me, planting out bulbs and violas in my large planters. Sadly because I really wanted to do that task. That’s one of the best tasks! But health dictated otherwise.

This has meant I feel like I hardly get out in the garden and I decided I needed to remedy this with the aforementioned walk. And the idea is that I’m going to try and do it daily, as weather and health allow, to take a moment of observation.

Today I observed three things, one of which was obvious and the other two required more work to look. Firstly, the obvious observation. The autumn crocuses planted in the curvy end of the shady border are starting to flower. Crocus Speciosus Cassiope, which was planted at the end of October.

I was particularly intrigued by how their stamens were holding themselves up high before the petals had properly unfurled. Maybe trying to be really obvious to any passing bee that there was food available? The stamens do recede as the petals fully open.

In a different part of the garden, after scooching around the Damson Border at the back of the garden, I discovered mushrooms had sprung up on the rotting old Prunus logs I obtained from my friend J-P over at Next Square Metre. 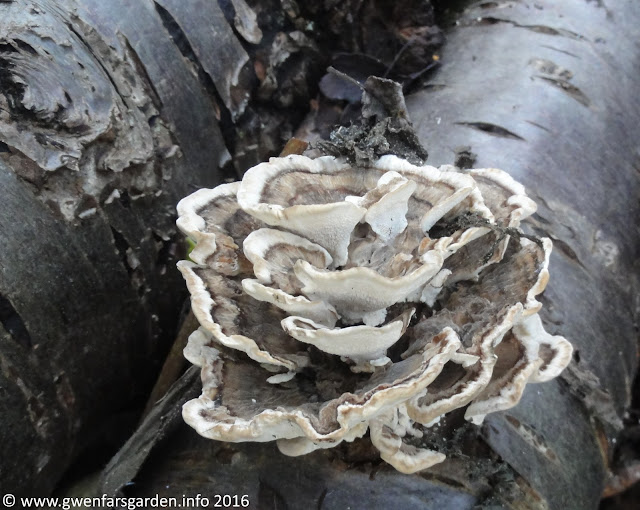 I believe this is Trametes versicolor. It’s very common but this is the first time I’ve seen it in my garden. The logs are on the border between my garden and our not-so-nice-neighbours (the neighbours on the other side are lovely). I put these there, then added some wire and planted the winter honeysuckle Lonicera x purpusii ‘Winter Beauty’ with the intention of allowing a wildlife corridor, but also attempting the screen off from the no-so-nice-neighbour’s rubbish. Viz: 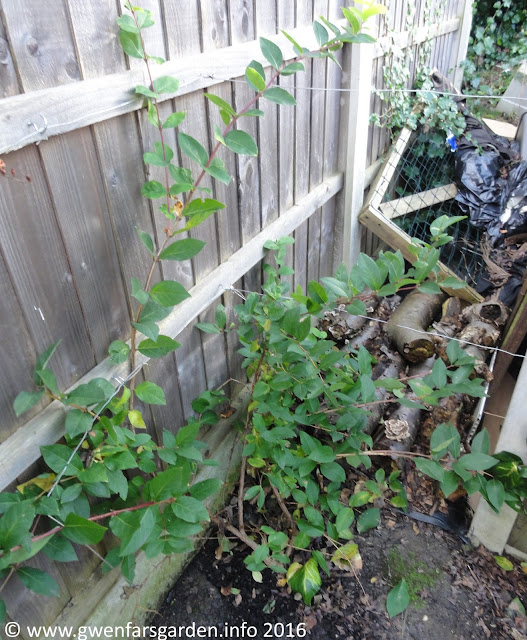 I found that the honeysuckle had come along since I planted it in January, and I need to tie it in a bit more. I’ve planted this variety because it flowers at the end of Winter, deliberately to help entice me outside on cold days. Whilst it doesn’t look like much now, the flowers, oh, the fragrance! Something to look forward to at Winter’s end.

After about 10 minutes in the garden I was done in. As well as ME, I’m getting over a virus which means double-whammy exhaustion after a short space of time. I returned to the house, to bed. However, I was rather happy about what I found, and feeling good for having been in the garden for a short time.

Winter is here, but there is still lots going on in the garden, and I’m going to try and get out there daily/regularly for a short walk, and a moment of observation.

Whilst I won’t try to to blog about my daily observations, I will try and do a weekly post. Kind of a small goal to help me focus, and to make sure that I do indeed get out into the garden for at least five minutes every day. I wonder what I’ll find tomorrow?

2 thoughts on “A moment of observation”