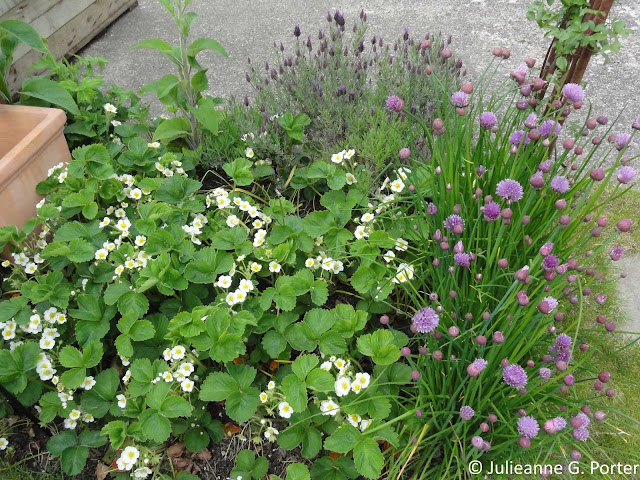 The strawberries are flowering well

Back in January I talked about planning the kitchen garden year. I thought that it would be good for me to do an update, looking at what I said then and how things have panned out so far for the 2015 growing season.

I am going to use my limited energy growing what I know and love, and get better at that rather than try anything new.
I started the season with getting lots of well-rotted manure and leaf mold into the veg beds to improve the quality and structure of the soil. Well, my super Kevin did the lifting, the hardest part, I just spread it out. I particularly added a lot onto the beds that will be for my courgettes and pumpkins, as they are rich feeders and I was determined to get better at growing them. 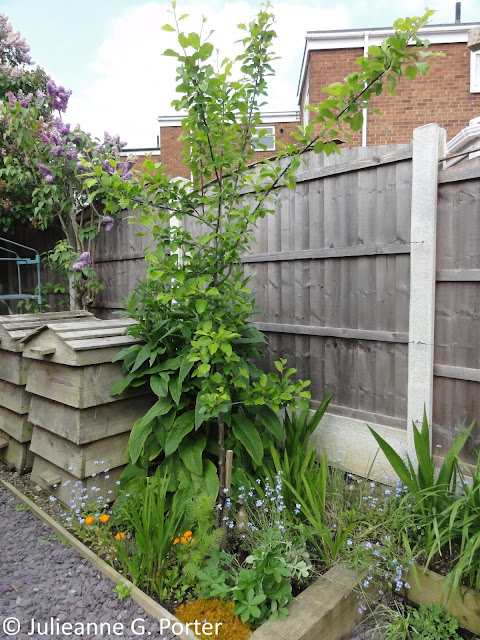 The Greengage has lots of new growth

So far, so good. But. I’ve was having lots of problem with germination. Lots. Almost nothing I was sowing in pots was germinating. My heritage Tomatoes weren’t germinating. Was there a problem with my saved seed? But the aubergines weren’t either and it was bought seed. Huh? Now the cauliflowers aren’t germinating, nor the kale. But I never have problems with the brassicas, what’s going on? Oh, and the spinach and chard that I sowed direct and covered with a fleece weren’t growing. Spinach and chard are easy.

I was worried. Really worried. And I didn’t say anything, didn’t even voice it out loud to myself, as I was really frightened that ME was impacting on my ability to grow. I tried sowing in different compost thinking it might be that causing the problem, but still no germination. 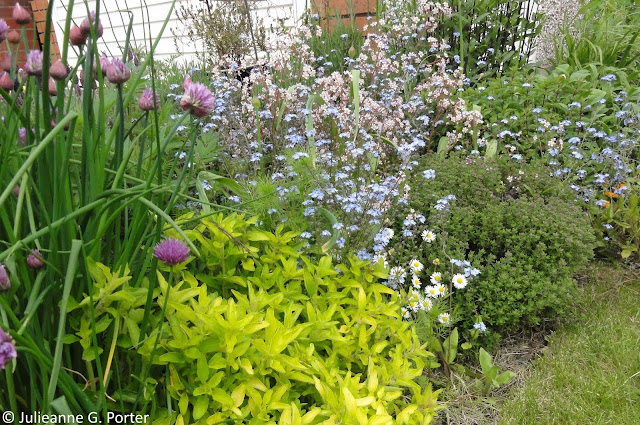 After two months of this, a week ago I finally I decided to break my silence and asked on Twitter if anyone was having problems with germination. Turns out it wasn’t all about me, or ME, but lots of gardeners were having problems with germination. Because it’s been such a cold Spring. And the soil just doesn’t want to warm up. And even people with real greenhouses, not like my mini-plastic greenhouse, were having problems. A massive sigh of relief. Why didn’t I ask Twitter sooner, rather than over thinking I was losing my touch. Thanks Twitter gardeners. Note to self: just ask next time. And also, take more notice of the weather and not just think, oh, but I sowed that time last year and had no problems… 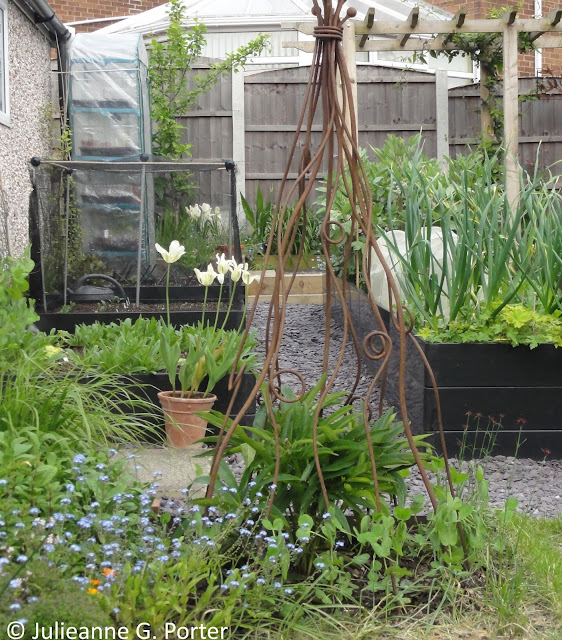 Pea ‘Lativan’ growing up the obelisk

The irony is that as I was worried I was losing my touch, the parsnips and carrots I sowed direct to the soil germinated without a problem and are growing really well. And I had sowed some courgettes and pumpkins direct into the soil and covered them with cloches, in part as I was trying to save energy with potting, and they were growing really well under the cloches. Interesting how I focused on the negative of the problem germination’s, and not the positive of the veg I was having no problem with. I suspect I wasted limited energy worrying when I could have held off and sown later as it finally started to warm up. I recently sowed brassicas and chard and these have have all germinated. 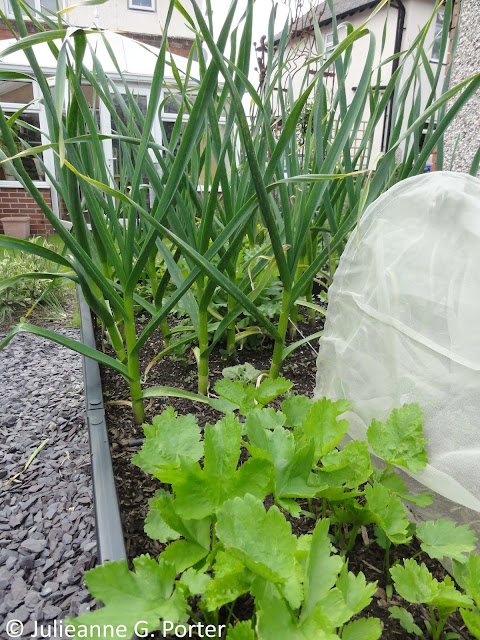 Parsnips, garlic and carrots to the right under cover from the dreaded carrot fly 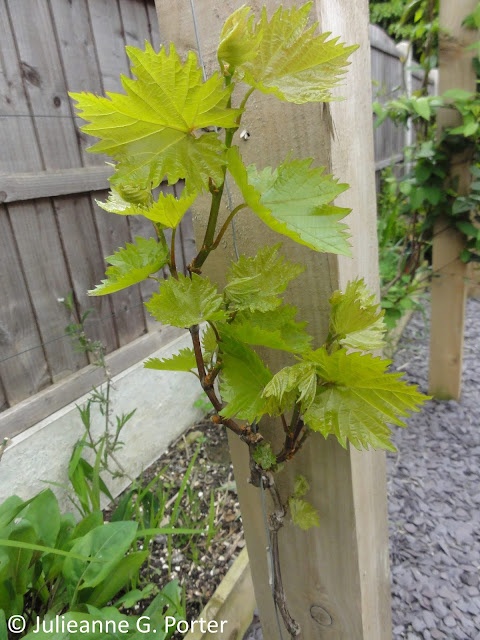 The grapevine has woken up

I have been sensible and reading up on how to grow courgettes and pumpkins more successfully and have discovered that the reason for last years failures might in part be due to problems of pollination. In both cases the fruit would start to grow, then die. And this is what happens when the flowers haven’t been properly pollinated. Although I was seeing plenty of bees and other pollinating insects, clearly they weren’t getting to the courgettes and pumpkins. So I’m going to do some hand pollination this year just to make sure. I’ve not done it before but it doesn’t look that hard. Watch this space. 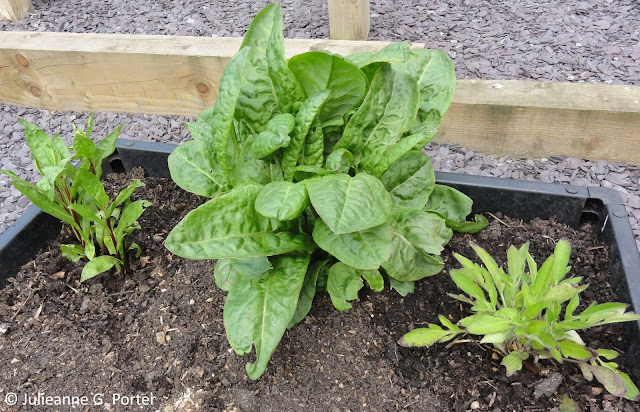 In the cut flower border, Helenium Sahin’s Early Flowerer (left) and Rudbeckia Takao (right)
with non-flowering Sorrel in the middle

I’m going to grow what I like, not what I think I should like.
I decided to pull out the perennial kale and grow cut flowers instead. I sowed my seeds, but again had problems with germination, only a few Cosmos Antiquity have germinated and no sunflower seeds. Having learnt from the above, I have sowed some more a few days ago and they are germinating fine. However, I have decided that if they aren’t coming along quick enough for planting out in June, I’ll just buy some plugs from Heeley City Farm and plant those out instead. It will cost me a couple of quid, but will take up less energy. Plus, I ‘ll get to check in on the baby goats at the farm – so cute. In the meantime, I’ve added Helenium Sahin’s Early Flowerer and Rudbeckia Takao to the cut flower border. 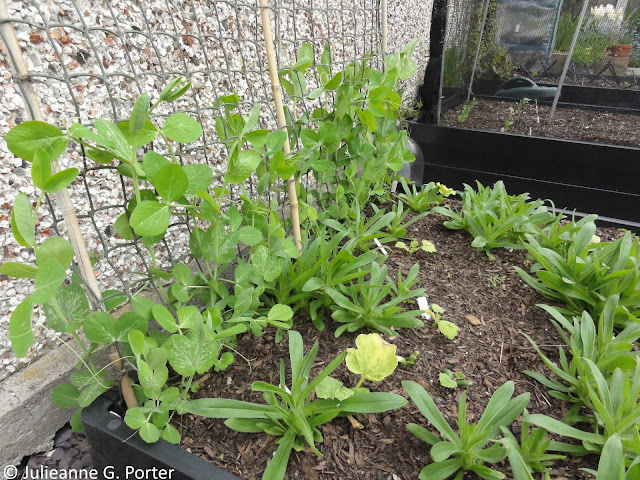 More Pea ‘Lativan’, plus courgettes and pumpkins planted out, intermingled with Corncockle

Luckily I’ve had no problem with my peas germinating (see, it really wasn’t that bad – why didn’t I see what my eyes were telling me?!) and I expect at the rate they are growing I should get a good crop. I like fresh peas. Mmmmm. 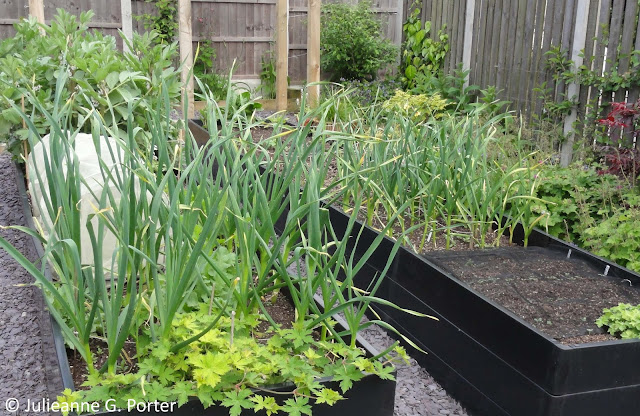 I’m growing because I enjoy it and I love the food, not to be self-sufficient
The worry about losing my touch aside, this is mainly working. I’m still feeling pretty relaxed aside from the occasional wobble about wishing I had an allotment too, and I’m enjoying what veg I am growing. The Broad Beans and Garlic are both looking good. The Garlic should be enough to supply us for a year and with some to spare. The Broad Beans will give us a few yummy meals. Not self-sufficient, but self-picked and cooked within a short space of time. That’s pretty good. 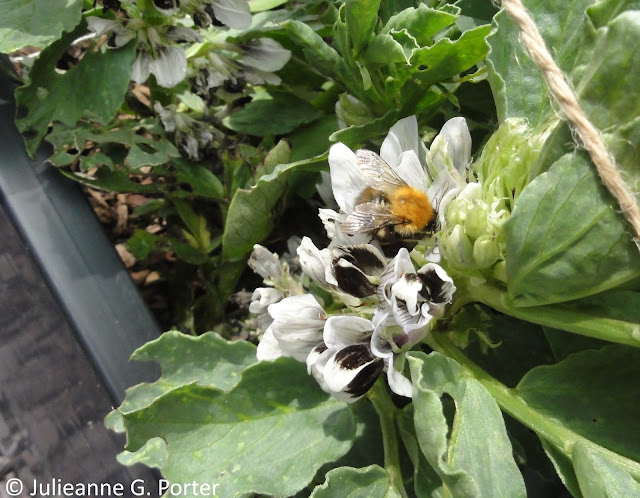 Workability: I will accept that even with all my hopes and planning, it may all fall apart
Because there was no tomato germination and they need longer to grow, and rather than taking up more time and energy and start sowing more now, late May, I’ve just bought a few plants instead. I’ve decided not to get hung up on only growing heritage forms or varieties from saved seed, and just make life easier.

The potatoes need earthing up. That’s another job for Super-Kevin 🙂

I’ll confess that it’s not easy to accept at this point that things might all fall apart. After all this time invested in worry, it’s hard to not be invested in my crops.  But I need to remind myself that it might all fall apart. ME is unpredictable. And in recent weeks the ME has been worse and I haven’t spent much time out in the garden. The doctor has put on new medication, including Vitamin D (ironic to think a gardener would be vitamin D deficient), and I’m quietly hoping that this will improve things. But only quietly, because let’s face it, it might not.

So I have to remind myself that it is as much about the pleasure of gardening when I can as anything else. That the end product isn’t the point, but the process and time spent doing so, that is. 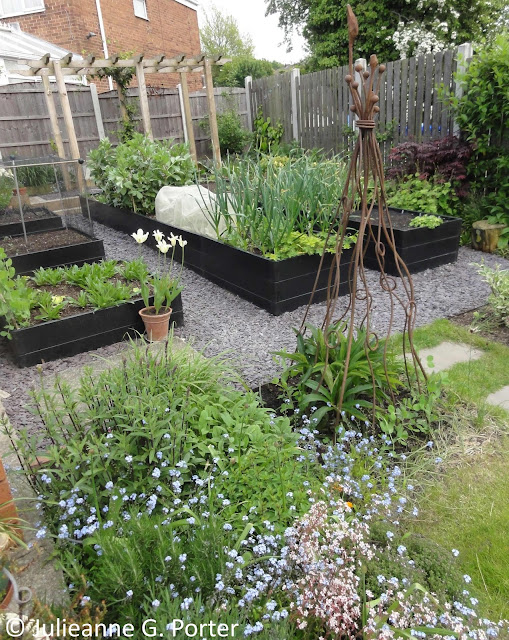 * * * * *
I welcome your thoughts and suggestions. And if you blog about gardening with ME/a chronic illness, do link to this post in your blog and leave a comment below with a link to your post, so we can all find each other.

2 thoughts on “Gardening with ME: kitchen garden update”