Welcome to the first End of Month View for 2015. I’ve decided that this year, rather than discussing the whole garden each month as I did in 2014, I’m going to focus solely on the Long Shady Border. I feel to some degree I neglected this border last year and I know that I’m not entirely happy with it. So I want to see if focusing on it as my end of month view for the year might help me think though how to edit and develop it.

The Long Shady Border – the facts
This runs along the north-facing fence on the right side of the garden. This is 11.2m long x .80cms wide, and includes the Damson Border which is behind the sleeper wall at the top end of the garden. 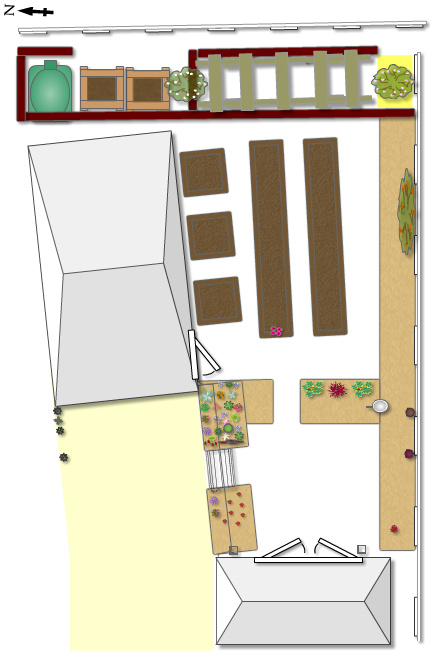 From November to February the full length of the border gets no direct sun. Then during March and April, as the sun starts to get higher in the sky, part of the border starts getting more sun, first starting down near the conservatory, then over this period extending over more of the border until by the end of April the whole border getting some full sun for part of the day From May-August, the whole border gets full morning sun for approximately 4 hours per day. The light then works backwards (ie. compared to March & April) in September and October.

I’ve broken the whole border down into the 3 subsections, conservatory end, mid border and back border in order to help me with the type of planting. So part sun/part shade plants in the conservatory and mid border, to full shade going towards the back border The latter can get a bit mossy.

So whilst it is predominantly a Shady Border, hence the name, this isn’t straight-forward and means that I need to find plants that are happy in shade, but don’t mind a blast of sun at times. But…

Yes, there is yet one more factor. Part of the border is very susceptible to flooding. This is the area around the edge of the Cornus Border from the bird feeder to the fence, and extends for about 1.5 metres back towards the conservatory. The rest of the conservatory end to the large bamboo planter can be a damper, but any flooding from further up in the border seems to drain away fairly quickly in this section. 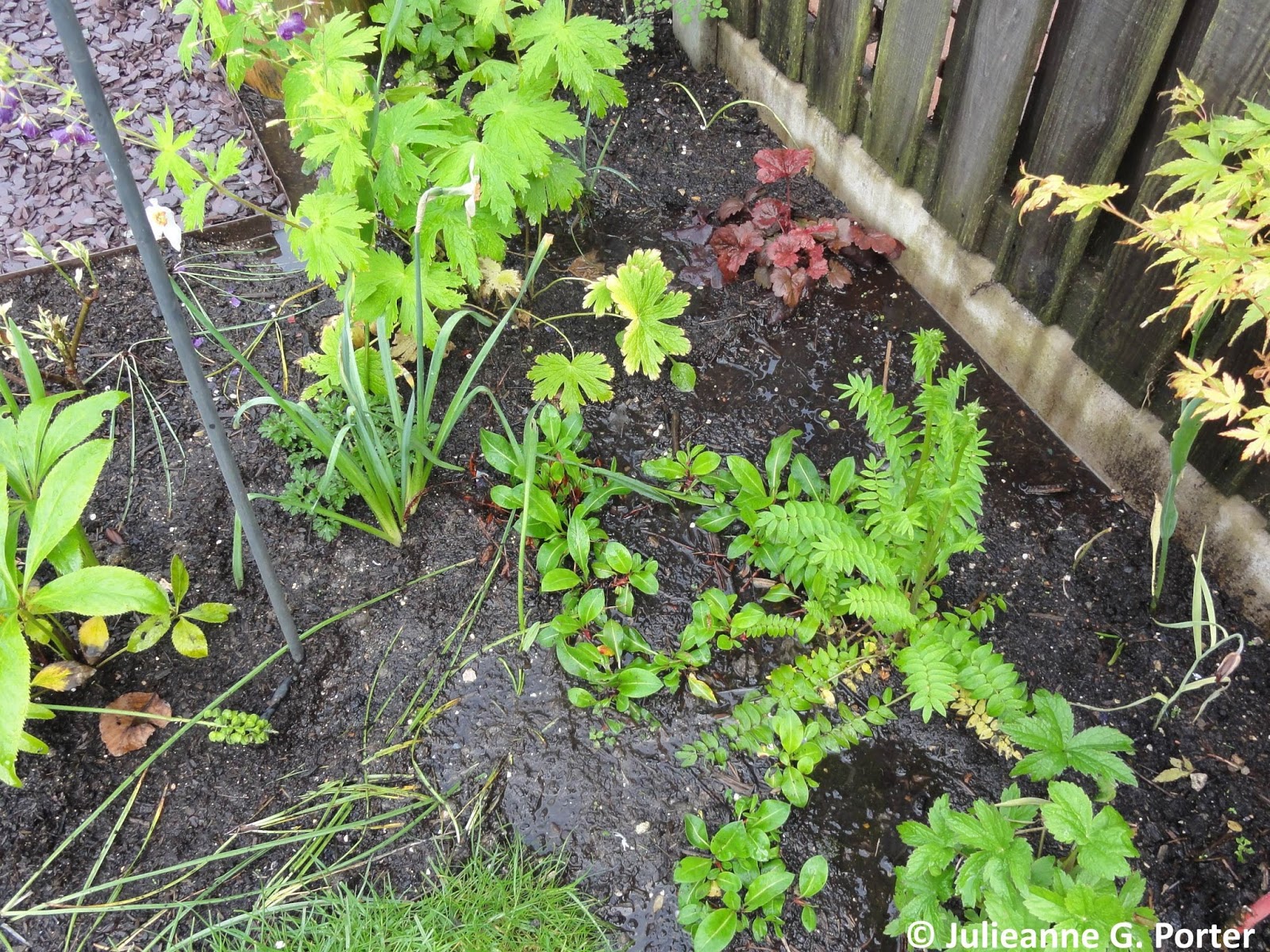 I’ve added all this detail as it is important to be clear about all the factors that impact on different parts of the border. It is essential to take these into consideration as I think about how I am going to develop the border over the coming year.

The following few photos from last year give you some idea of how the border was looking. Giving it is a long thin border, it’s not the easiest to photograph whole, so I tend to only have pictures of it in sections. 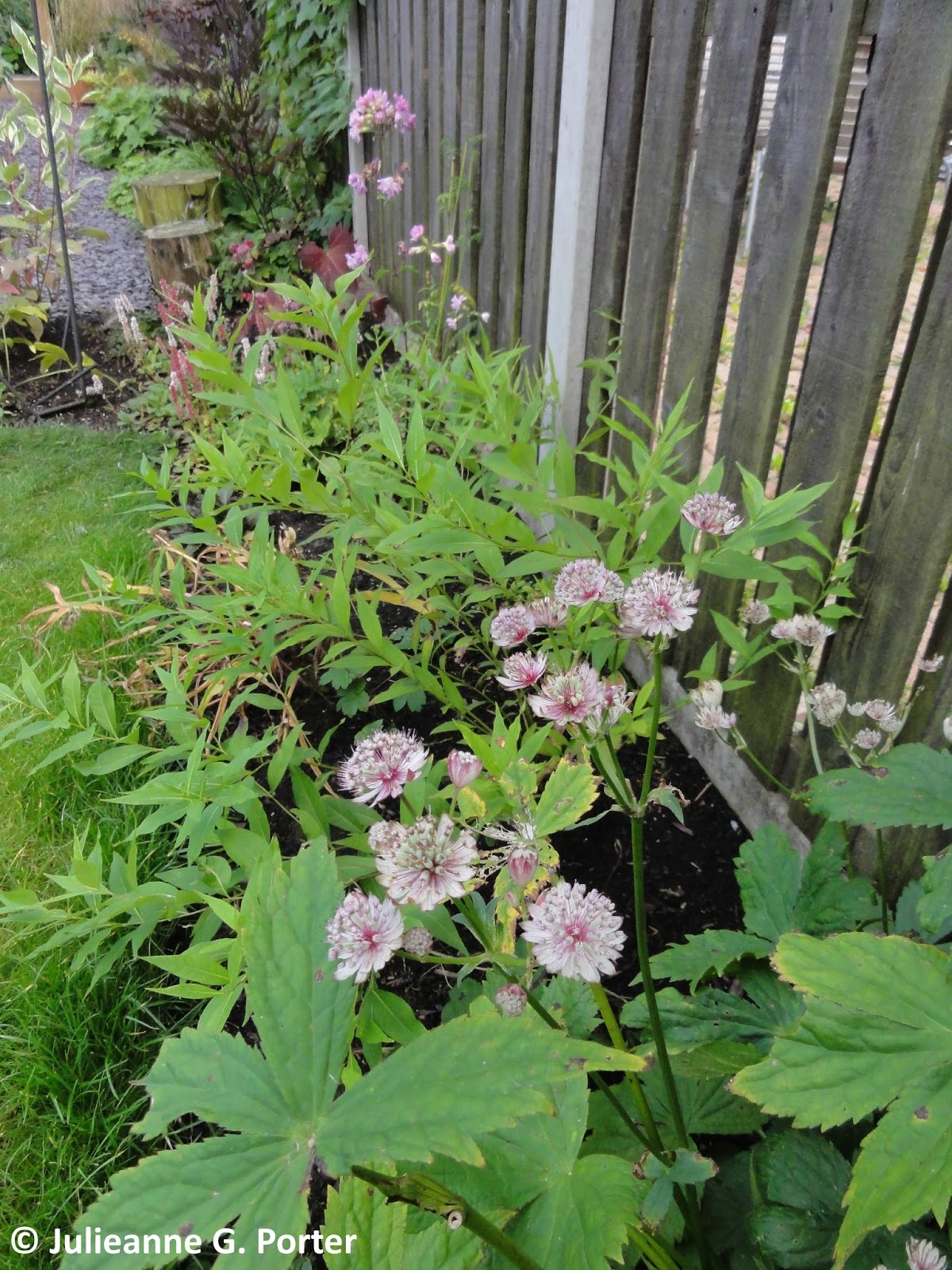 Looking from the conservatory end, July 2014 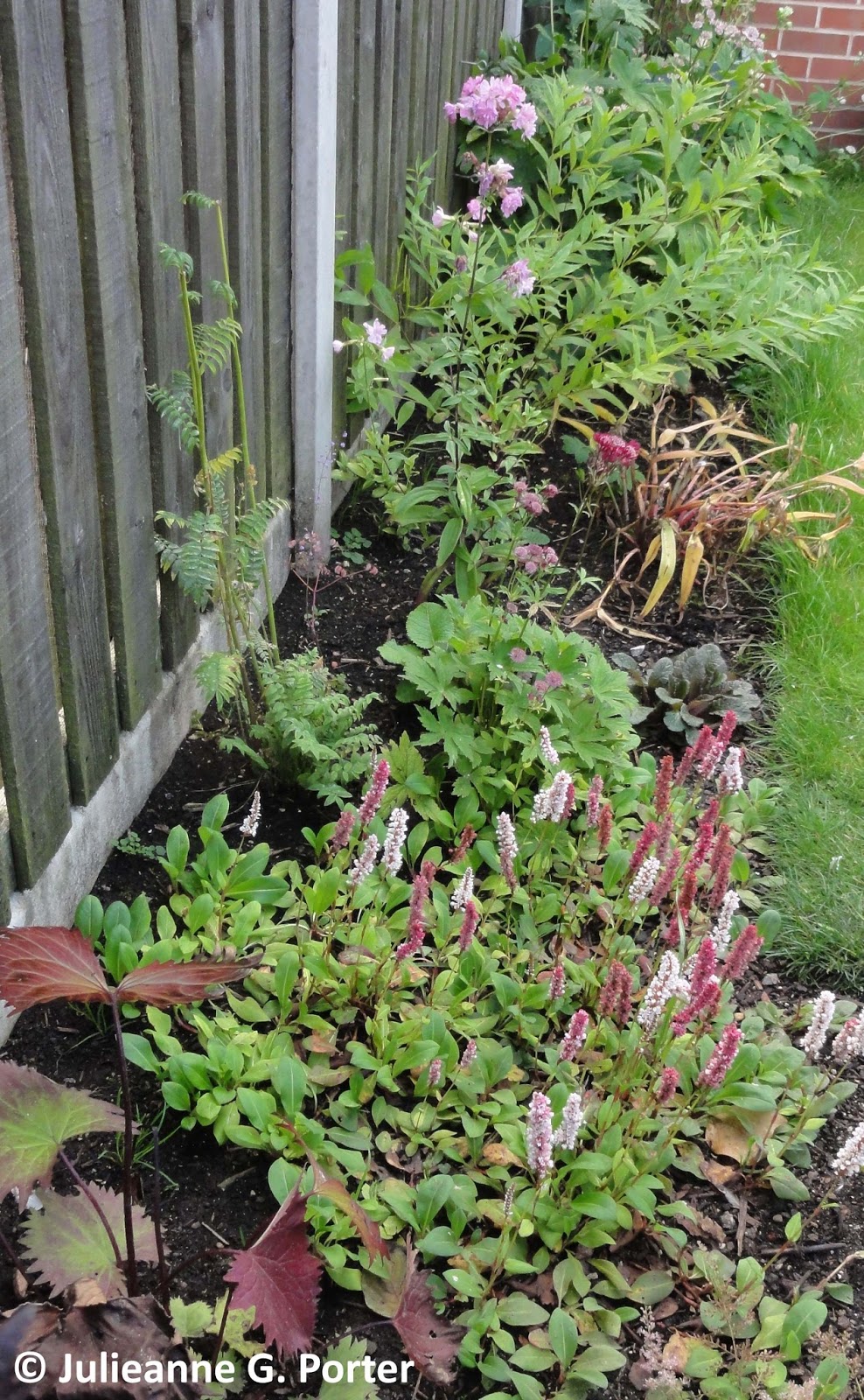 From the boggy area back towards the conservatory, August 2014 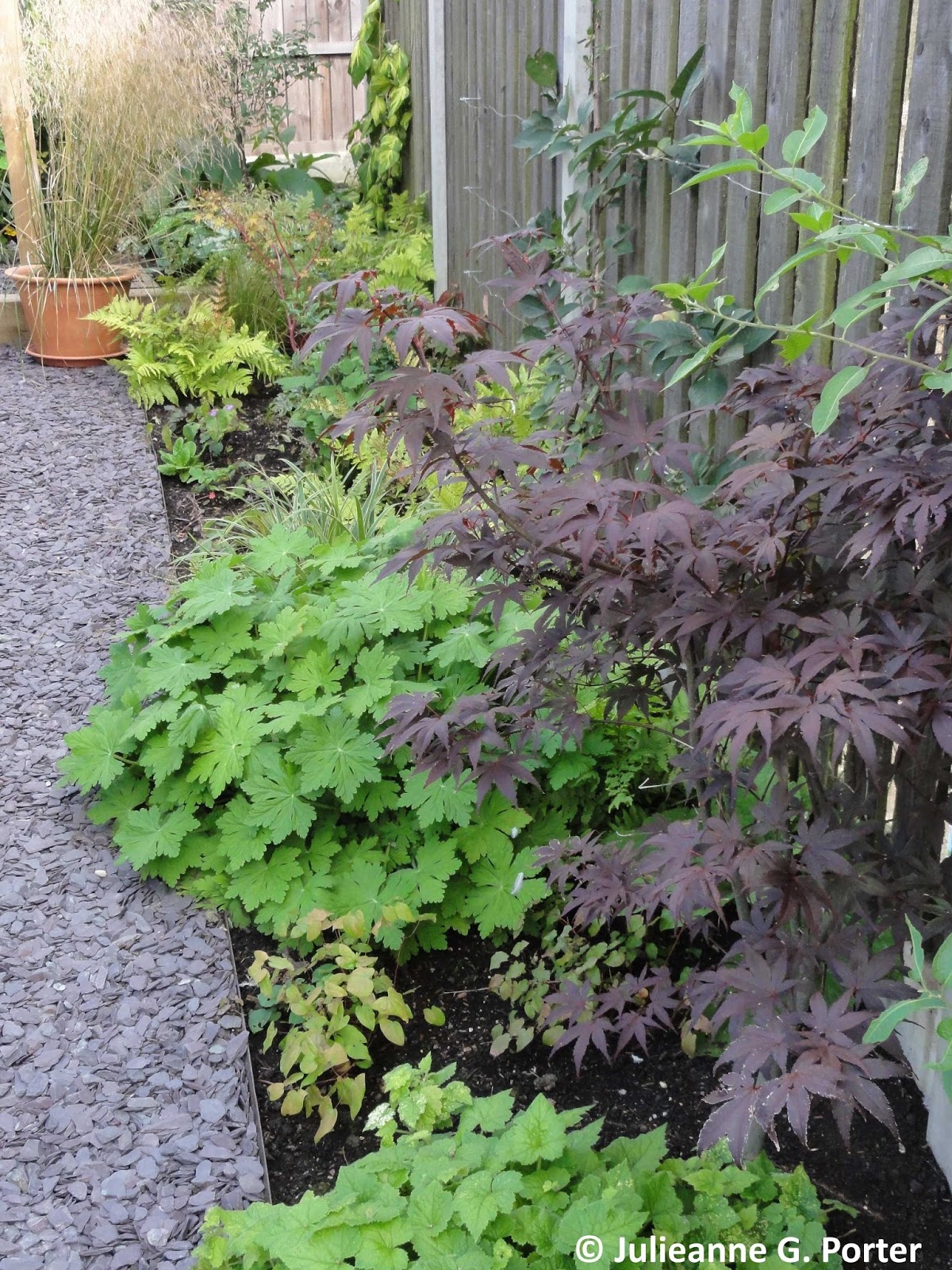 From the mid border looking towards the back, August 2014 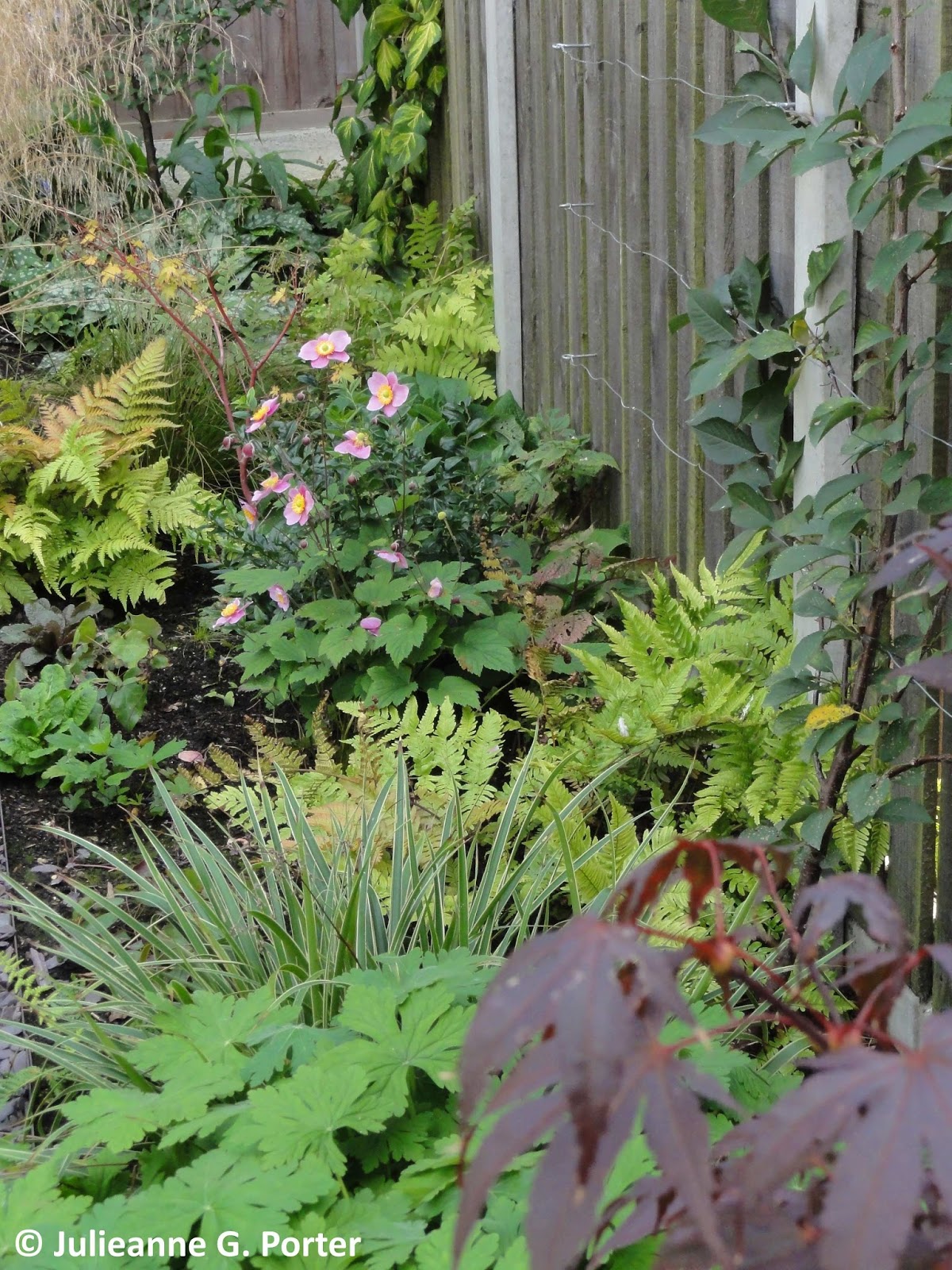 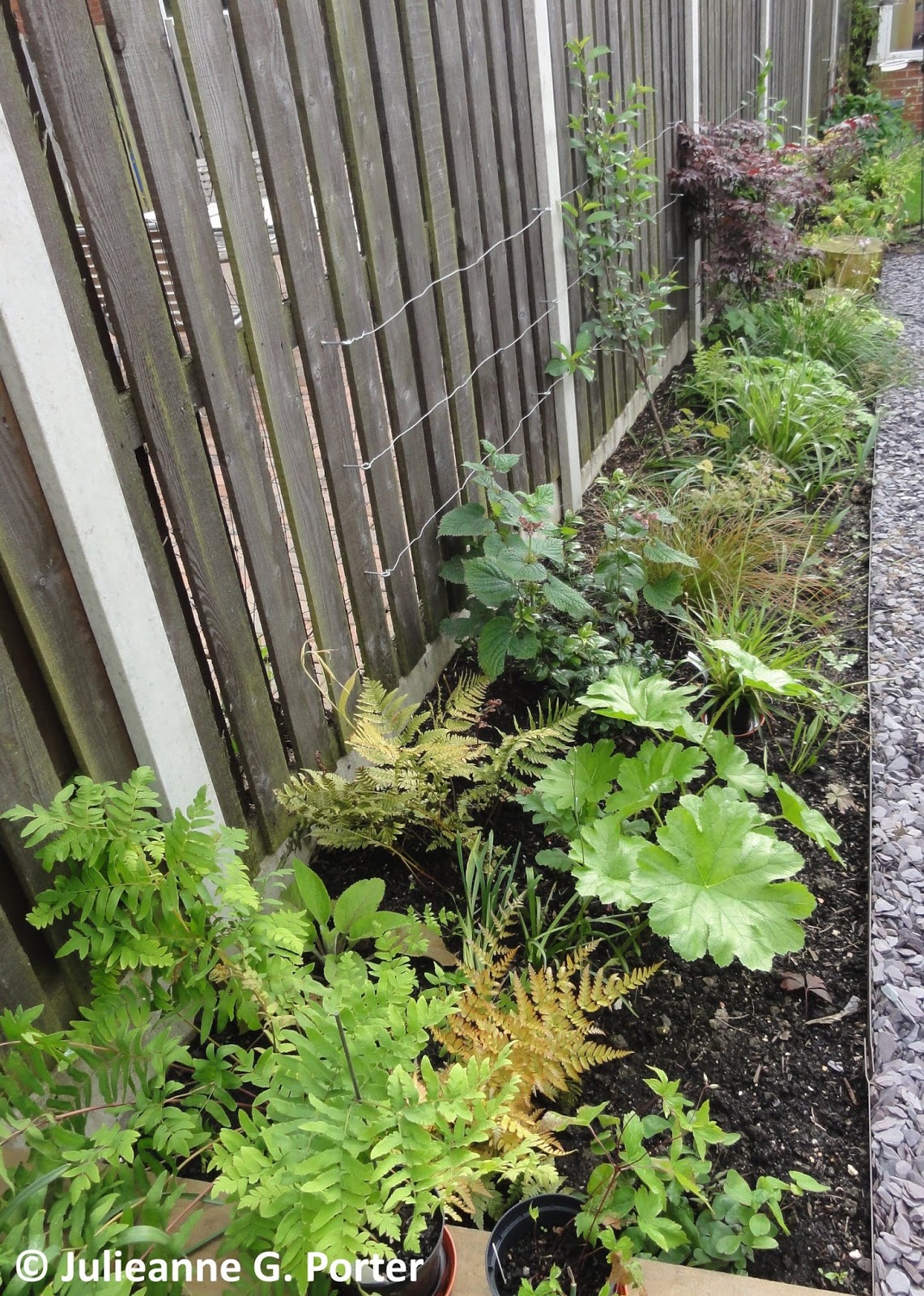 Looking from the Back border down towards the conservatory, June 2014, prior to 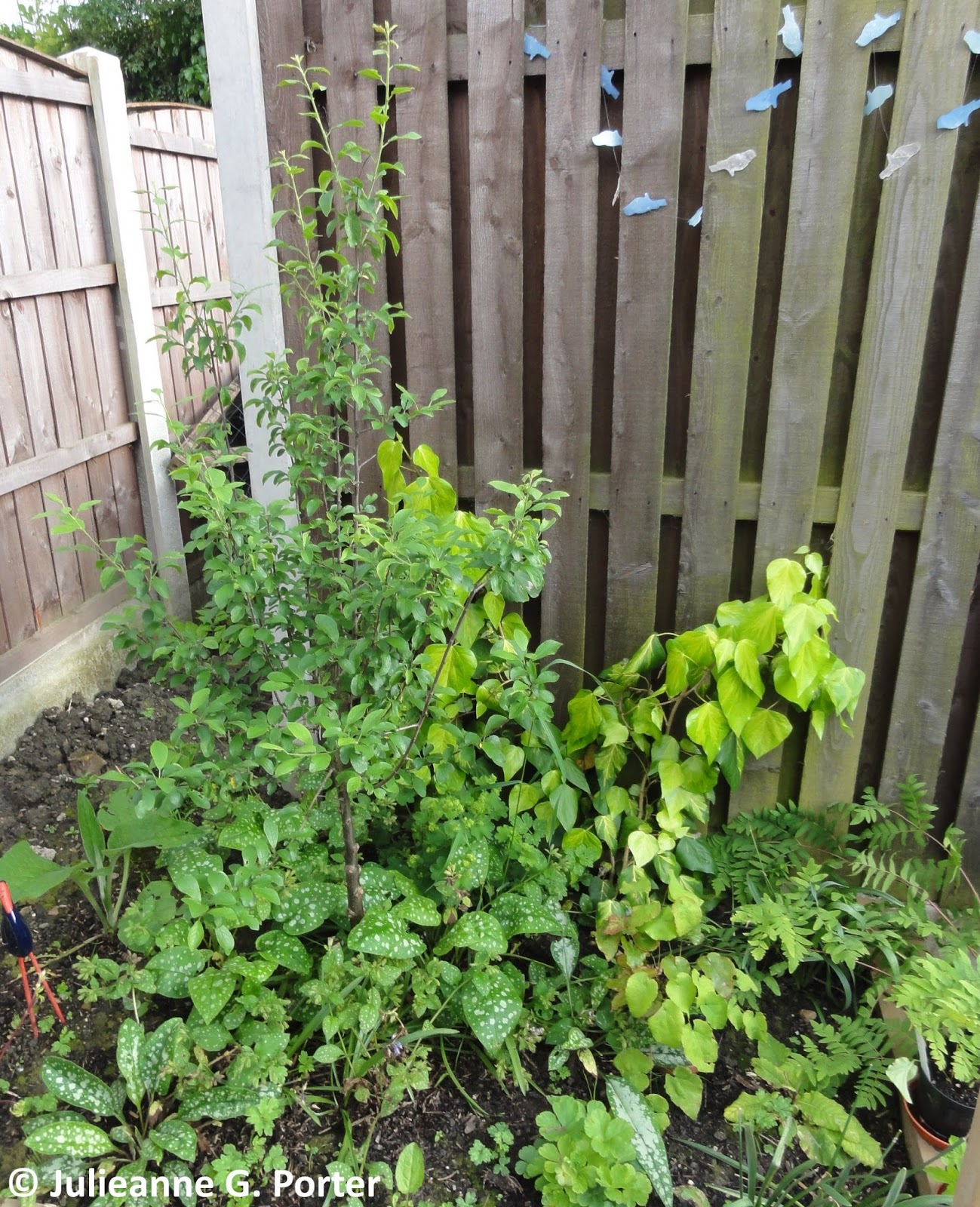 Some thoughts on developing the border in 2015
First, what do and don’t I like about the Long Shady Border? I am really happy with the trees, the Damson, Morello Cherry and Acer palmatum ‘Bloodgood’, plus Solanum crispum ‘Glasnevin’ which is a climber, not sure you would class it as a tree. Speaking of climbers, I’m also happy with the Hedera colchica ‘Sulphur Heart’ in the Damson border. I also love many of the ferns and perennials throughout the border. I’m just not sure they are working together as well as they could.

I’m most definitely not happy about the section that gets boggy. I’ve umm-ed and ahh-ed over whether to turn this section into a bog garden, and was finally convinced to do so after seeing the bog garden episode of Garden Revival a couple of weeks ago. I’ve decided to embrace the bog. Some of the plants in this section are happy in boggy conditions but the area needs editing. I’d like to add some ferns, and some height if possible.

I’ve also decided to add a small pond. I originally wanted to put in a pond, but for some reason changed my mind. I have no idea why. So it’s going back in and I’m going to build it into the new bog garden. I do need to think about how I’m going to do this as I think it will need to be slightly raised. This is because I don’t want the plants I put in it, and hopefully wildlife to come, doesn’t get washed away when the area floods. 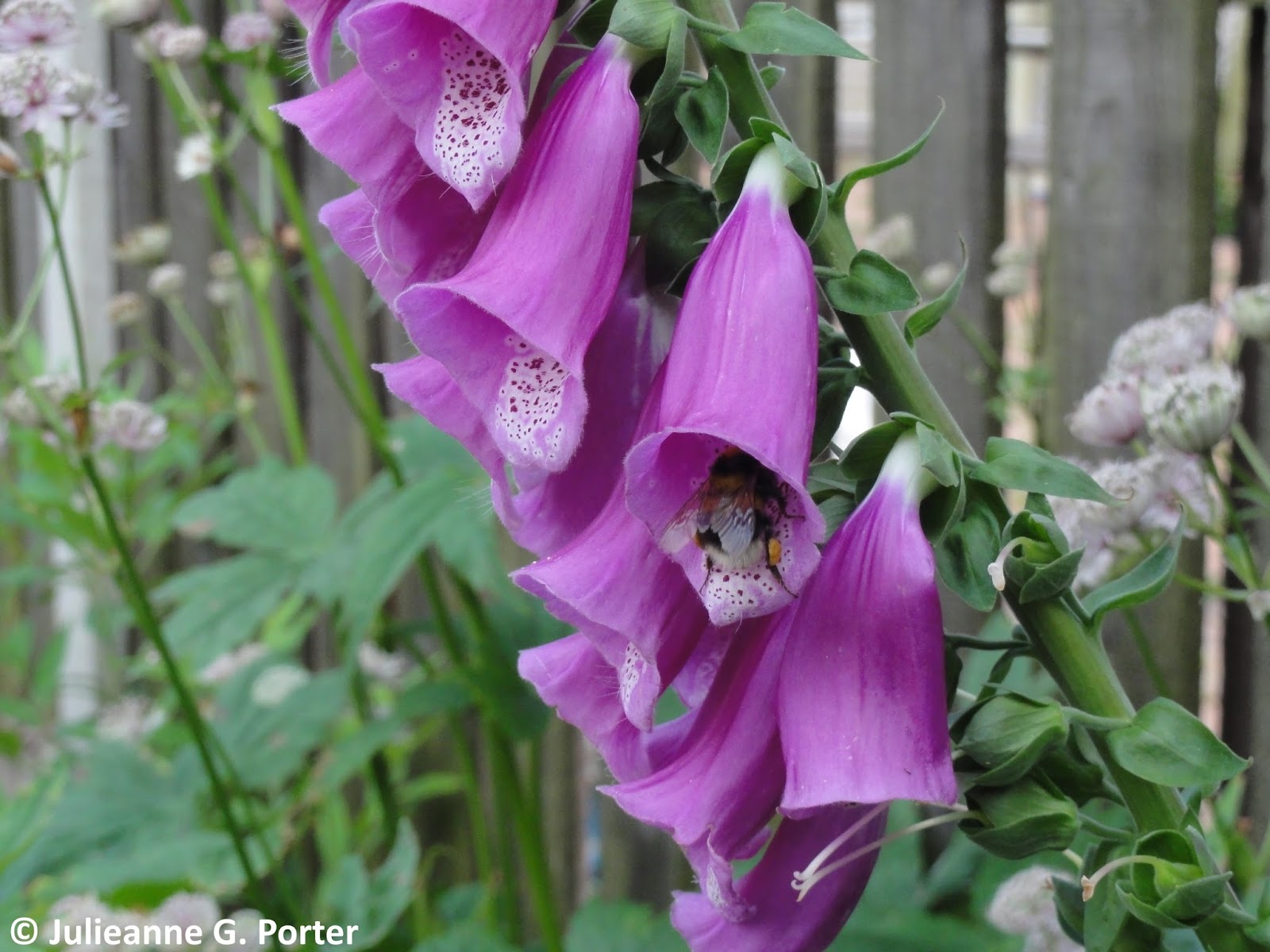 Pretty, but I need more colour in the second half of the year

I definitely would like to add more colour to the border. Being in shade, woodland plants are of course most suitable, so I need to add more to complement the plants and bulbs already there: pulmonarias, astrantias (pink and white), omphalodes, bluebells, fritillaries, anemones. I have quite a few epimediums which also have lovely flowers. But as you can see, most of these flowers come into the first half of the year, so I need to think what colour can be added to the second half. 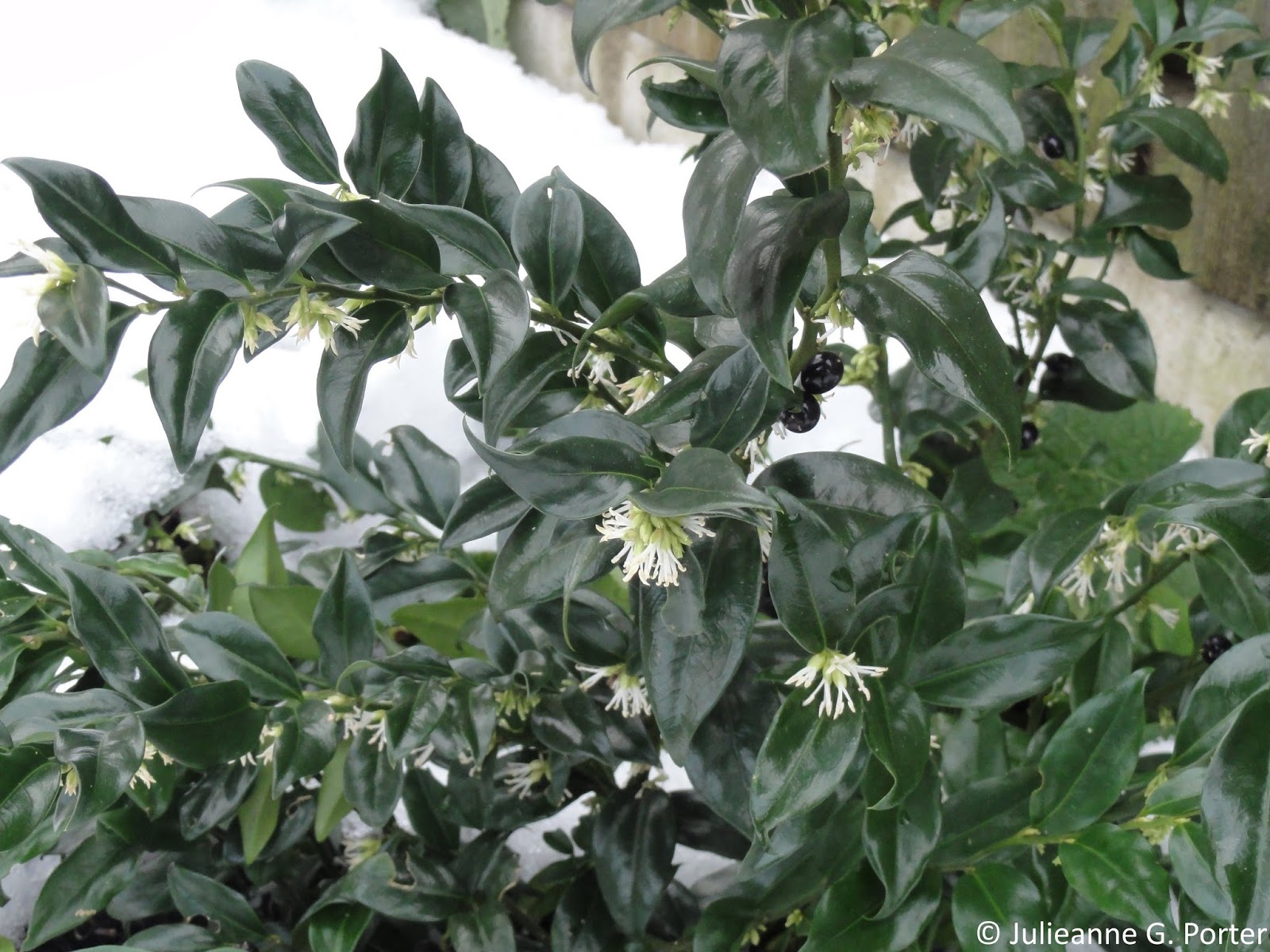 And if its not asking to much, I’d like to add more height whilst climbing plants and the Morello cherry take their time to grow. It just feels a bit flat at the moment.

There you have it. The Long Shady Border as it is. Thoughts? Challenges? Mmmm. I’ll be looking forward to receiving your ideas to help me develop and grow the border in 2015. 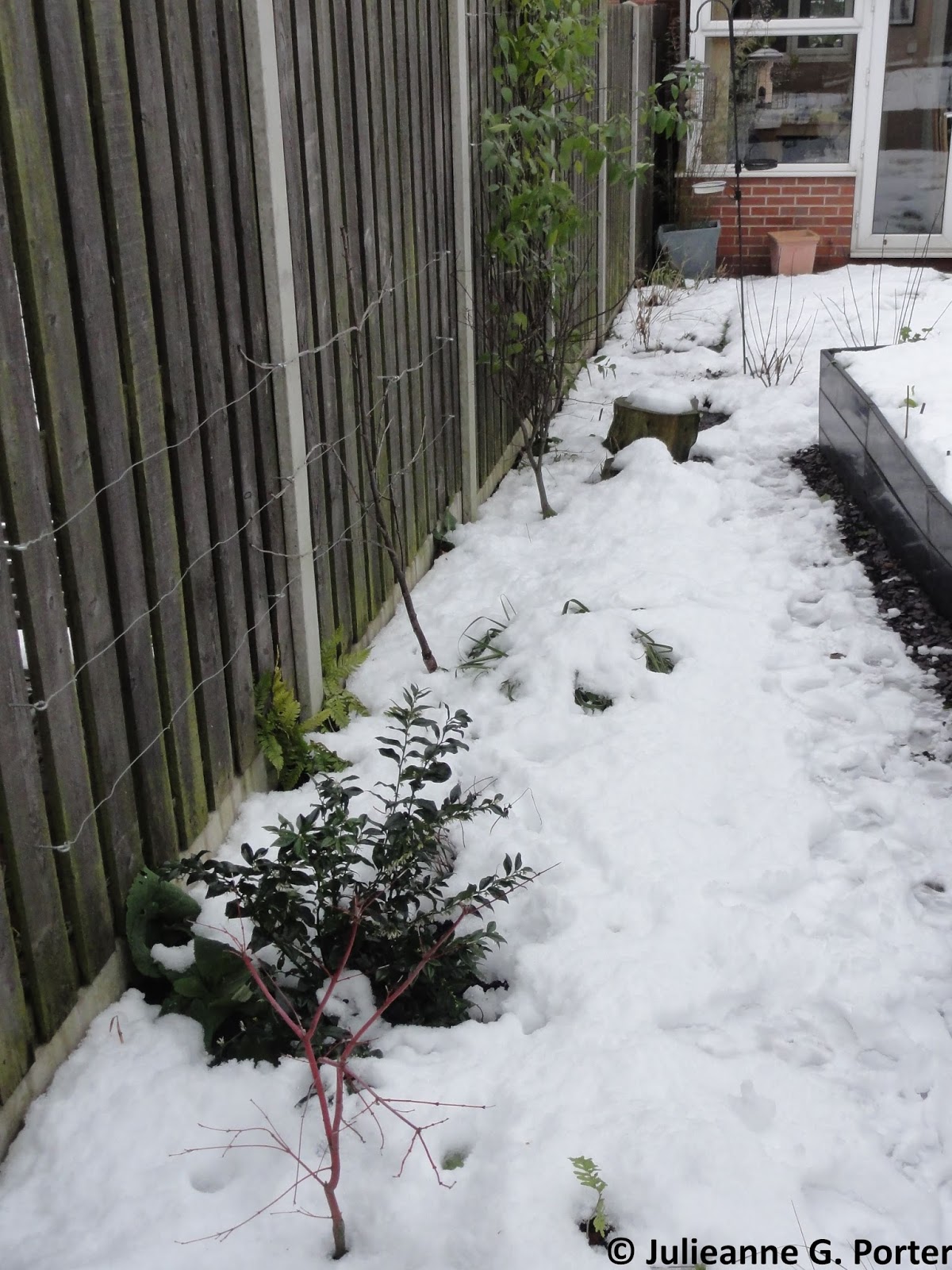 The border now, in snow
* * * * *
End of month view is hosted by Helen Johnstone, aka @patientgardener. Visit Helen’s blog for her January 2015 EOMV and links to other bloggers EOMV posts.