When I undertake my annual sorting through my seeds to see whether they are still viable (in date), I cross-check it against the Seed Viability spreadsheet that I originally created in 2012. In doing so the other day, I thought I’d check whether there have been any changes to when people consider seeds to remain viable.

Those from Amateur Gardening magazine, haven’t changed since 2012. The Seed Savers’ Handbook by Michel and Jude Fanton hasn’t been updated, so their 1993 edition still stands. There are some differences in the viability periods in the John Harrison listings. The 2012 dates were based on L D Hills, whereas his 2014 listing was updated in light of comments from a few expert growers.

There are other websites (predominantly in the US) now listing information on seed viability (not so much in 2012), however I’m sticking with these as they are comparable, which is the best I think you can hope for in this area of horticulture where if, as John Harrison says “…there are 3 growers assembled you will get 4 opinions!” For me, those listed below give enough indication of what to expect. Furthermore, I got the vegetable list from the Seed Savers Handbook from the Heritage Seed Library in 2012 and I figure they know what they are talking about. 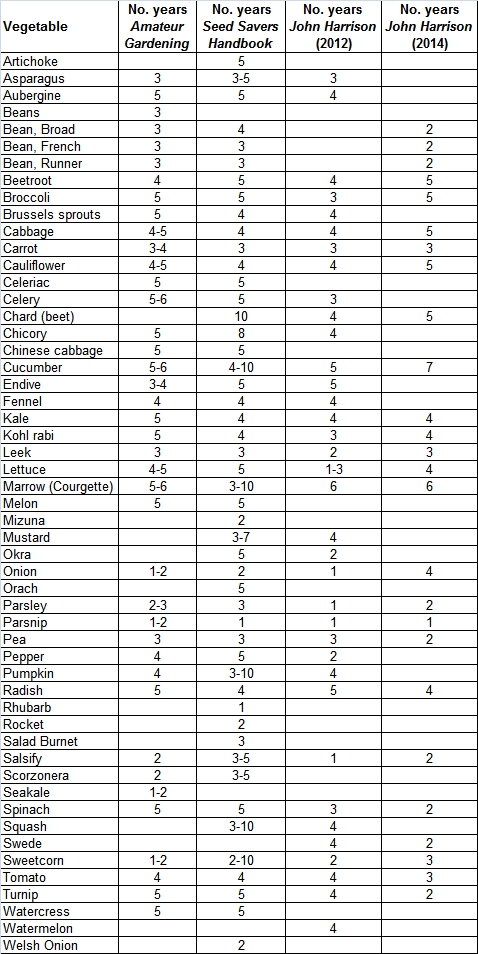 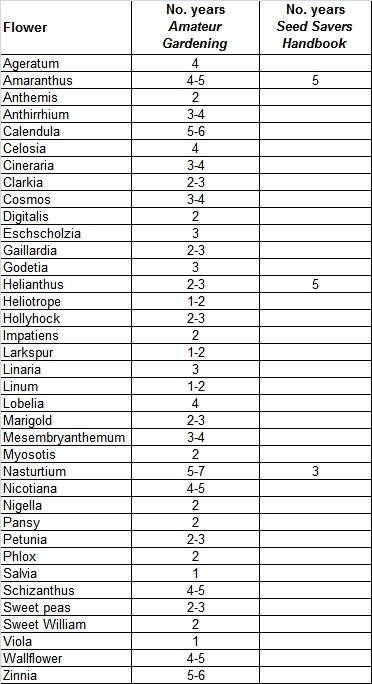 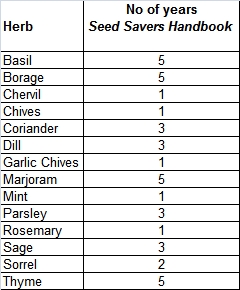 It’s important to note that even with the viability ranges listed, seeds can often either fall short of expected viability, or be viable for a much longer period. Much can depend on how they are stored. John Harrison offered some useful advice:

As you probably know, viability is very subject to storage conditions. Consistent, cool and dry being the best. Don’t fall for the ‘frozen keep forever’ – the seed banks like the huge one in Norway prepare the seeds very carefully before they go to the minus 20 store deep underground – ready to replenish the earth after the asteroid hits or whatever. Just freezing will kill off most seeds as the water in them forms ice crystals that rupture the cell membranes.

Incidentally I’ve sown courgette seeds 7 years past the date on the unopened packet and got 100% germination! Obviously the old car’s glovebox was the perfect place…

So view the figures above as a guideline. And if you have the time and energy, don’t be afraid to experiment with ‘out of date’ seeds.