Hot and dry for much of the month, July saw the perennials and kitchen garden really take off. My Solanum crispum ‘Glasnevin’ (green leaves starting to take over the fence on the right) went mad and Kevin thankfully added more wire for me to train it along.

In the Herb Border, below, I dead-headed the chives and a new lot of flower started coming up. The Pea ‘Lativan’ growing up the obelisk fruited and after picking many peas, I’ve left the rest to dry out for saving. Echinacea purpurea started flowering, as did my sweet peas. 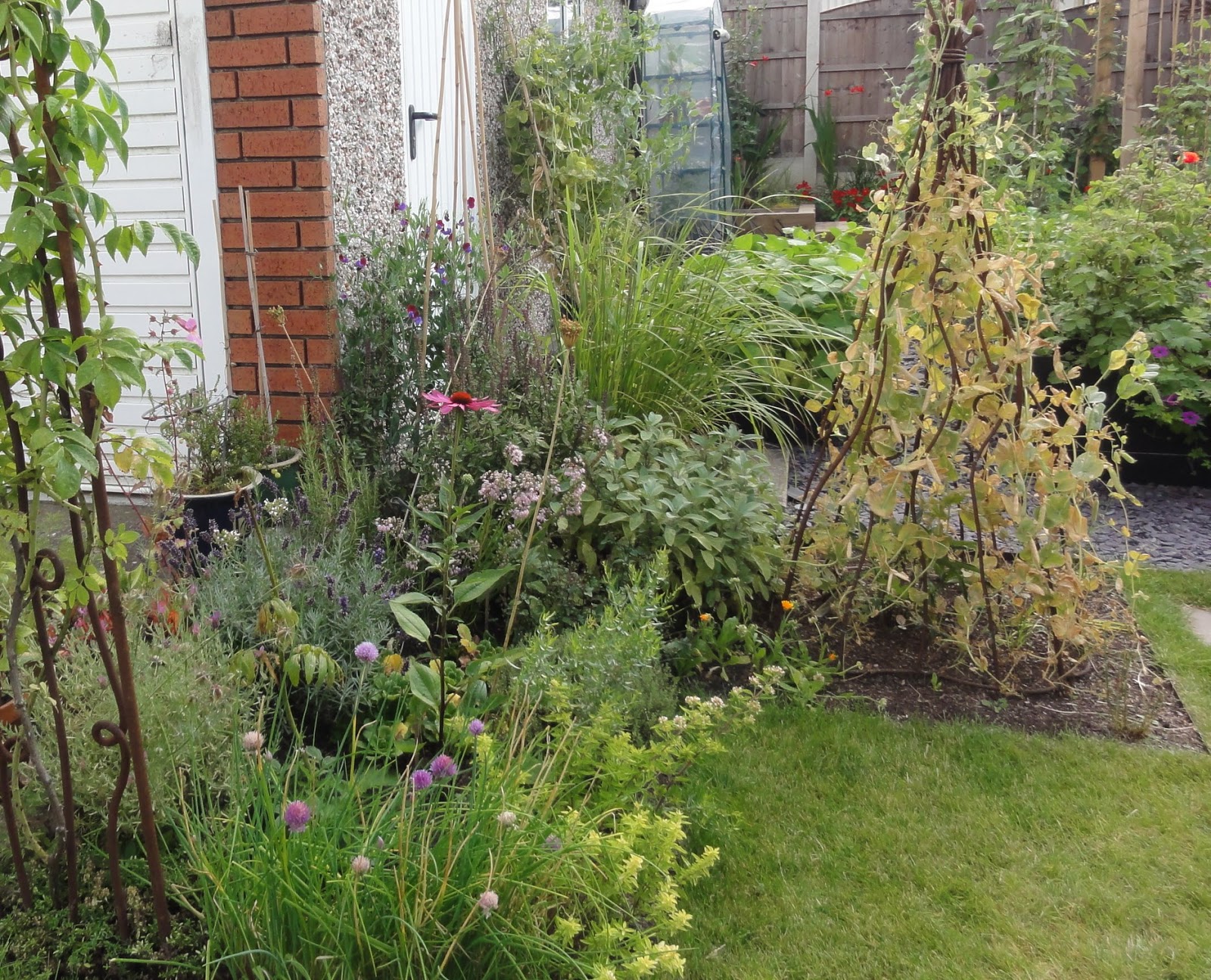 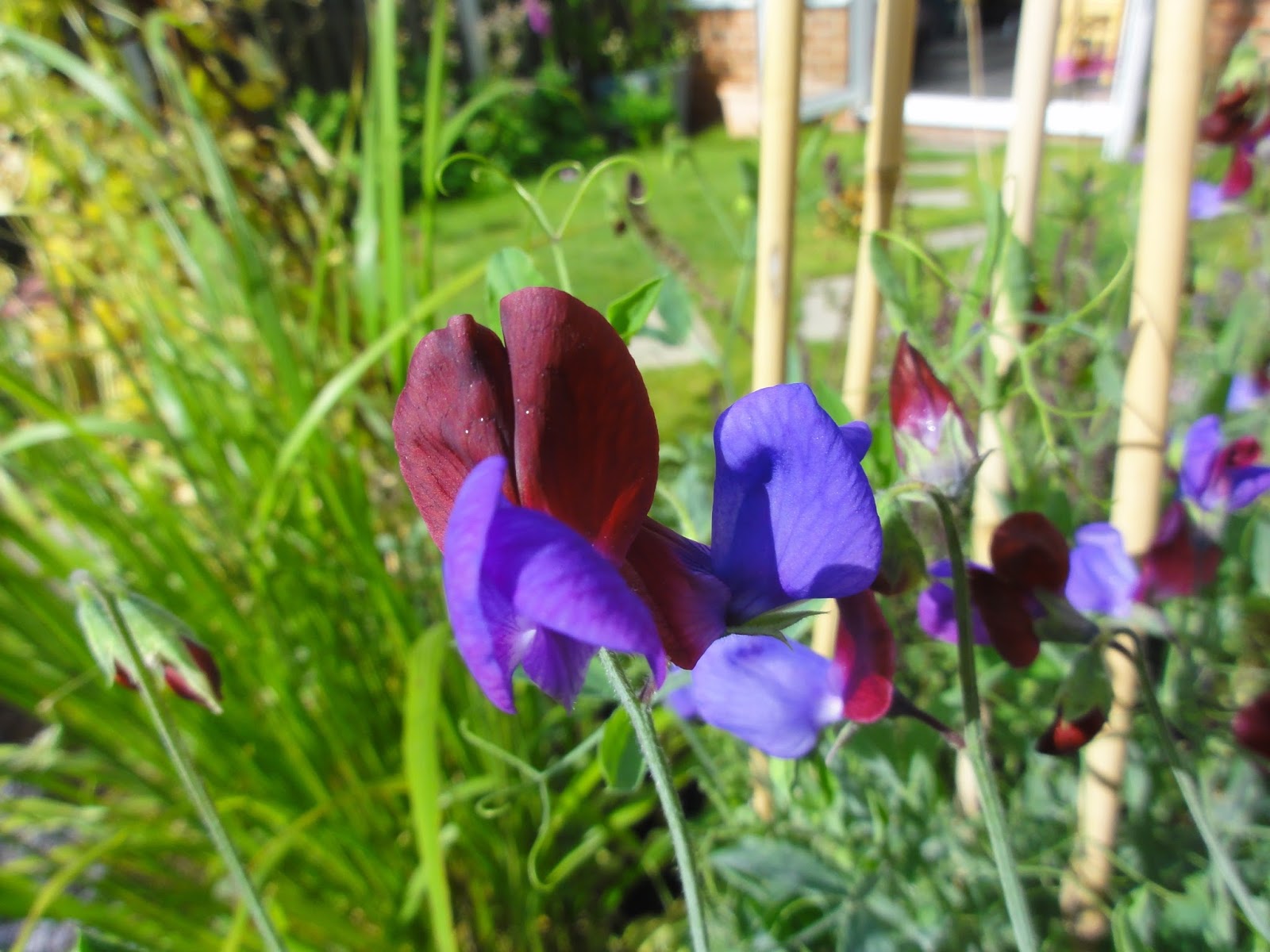 Thanks to @EWGardens, I know this sweet pea is Cupani as it has 2 flowers per stem, and the almost identical Matucana has 3 flowers per stem. I’ve been picking them almost daily and they reward me with fragrance in the house and abundant flowers to come.

In the Cornus Border, Sedum ‘Mr Goodbud’ just started to flower at the end of the month, and going on past experience, the bees will be at it in no time. 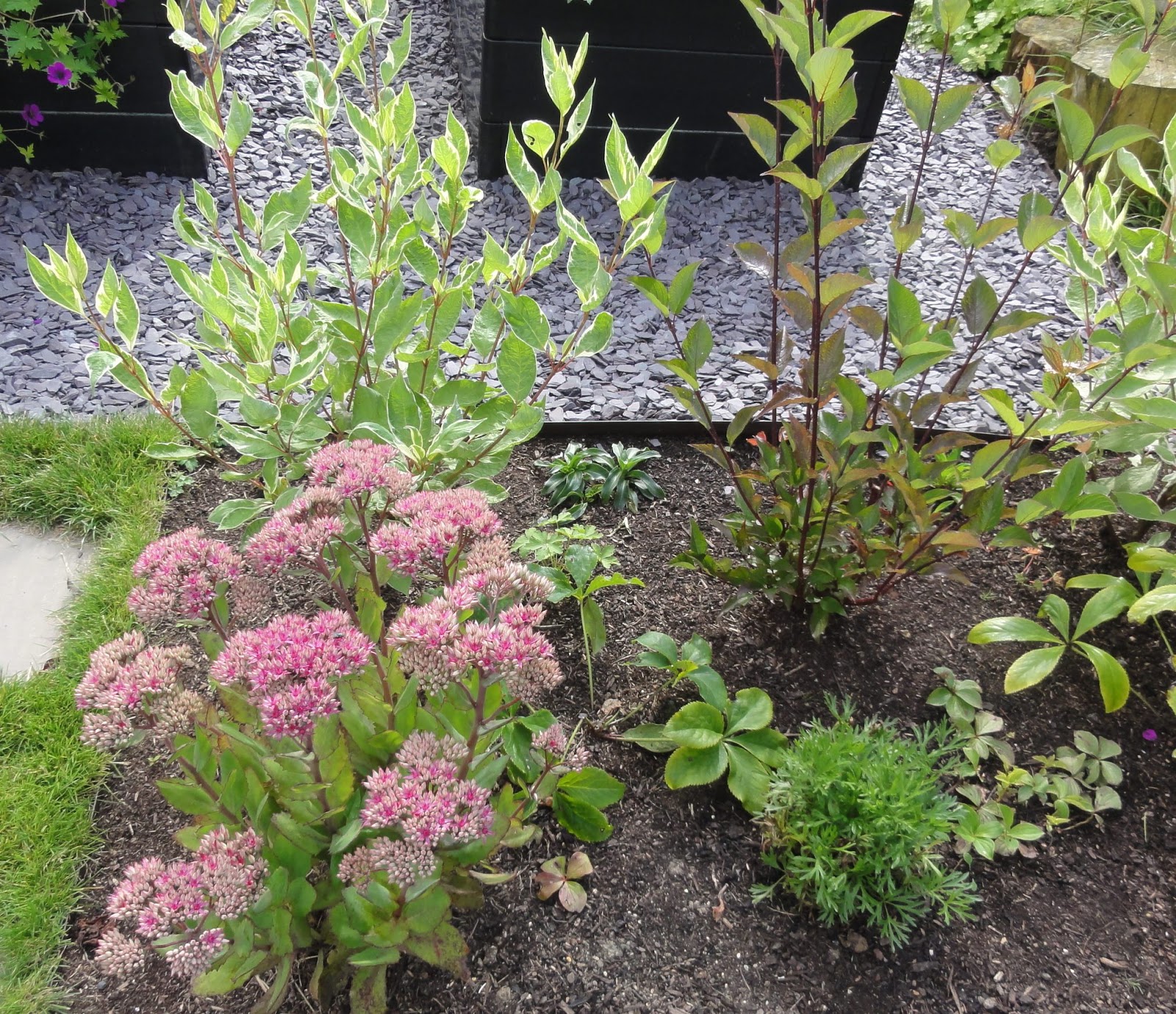 The major project in July was editing and replanting the ‘shadiest’ section of the Long Shady Border (below), which is a slight misnomer at this time of year, as even this section of this north facing border gets several hours of sun. Last month I mentioned moving the Darmera peltata to the boggy section further down the border. However, after several people mentioned how this plant can take over, I decided to put it in a large pot for now and think about what I might do with it. Maybe it will stay in the pot! 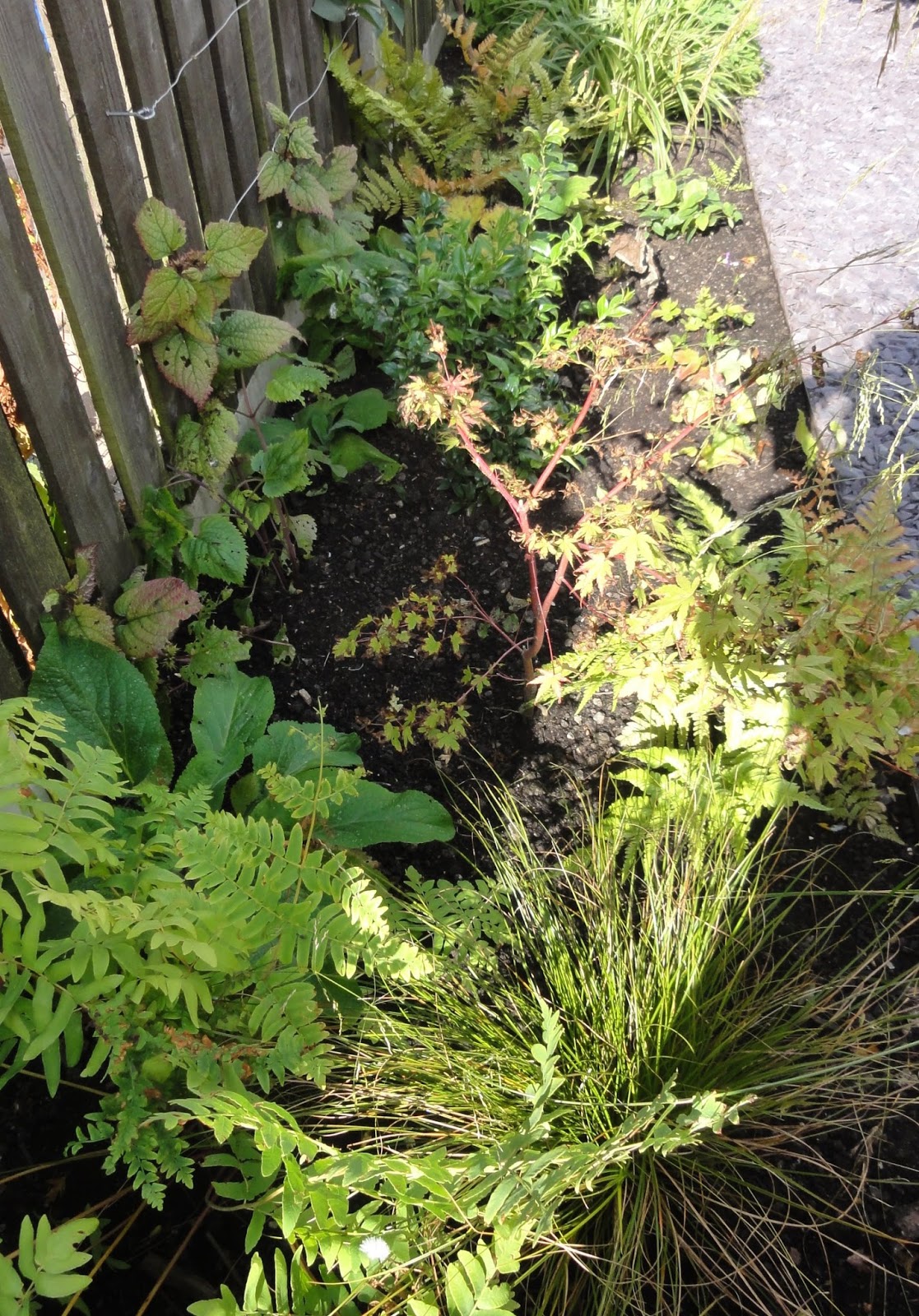 Our Acer palmatum ‘Sango-kaku’ that was dying from being flooded has now been relocated to this non-flooding part of the border. It’s looking a little worse for wear now, but I don’t think it is dying, just adjusting to all the shocks and will hopefully come back next year much happier. I’ve moved quite a few plants around (i.e.Carex testacea, Dryopteris erythrosora and a few Epimediums) in what I hope now will be a more attractive planting. I’m liking it so far but will have to see how it fills out. 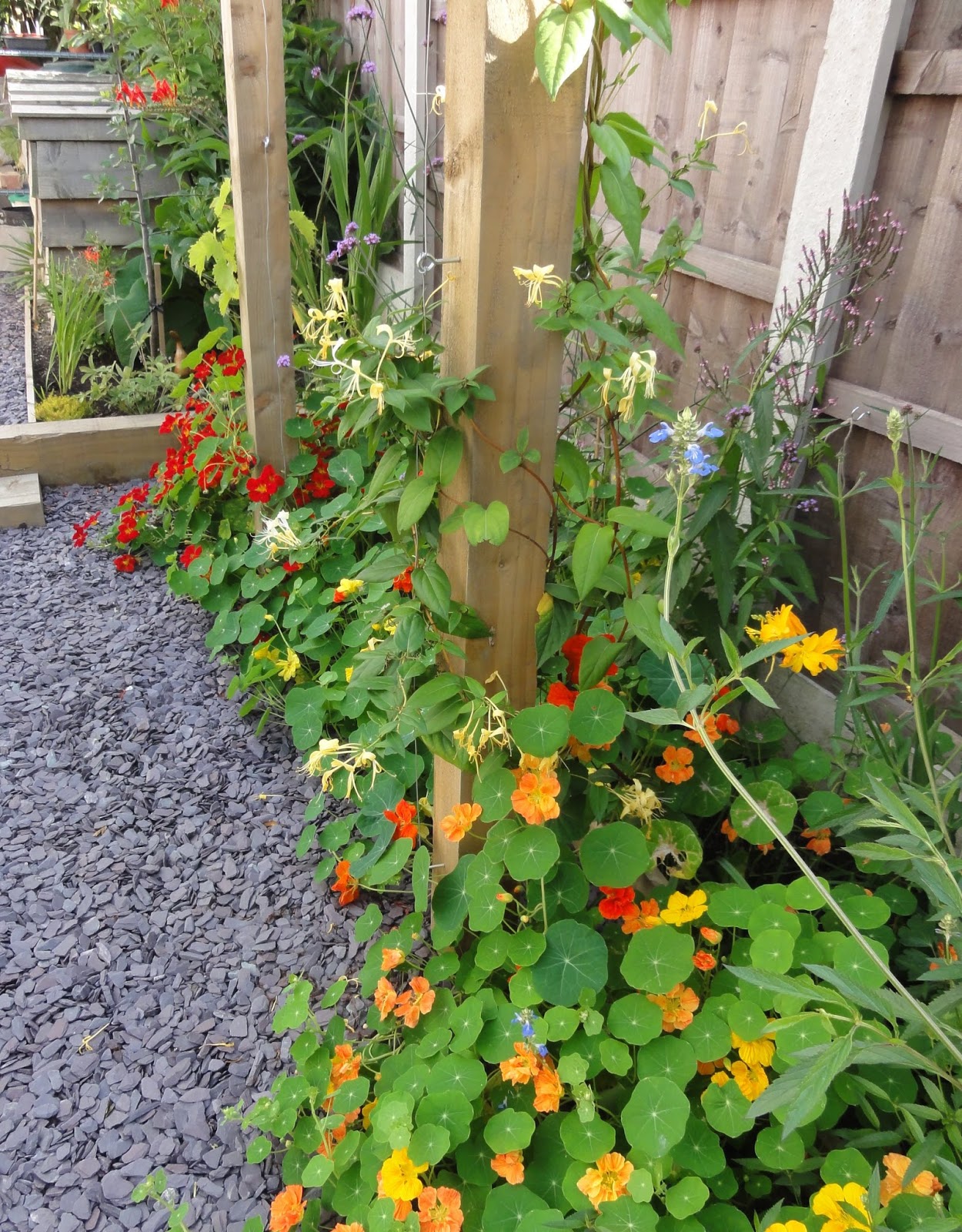 I’m really enjoying the burst of colour along the back fence (above and below). Honeysuckle Lonicera similis var. delavayi has been flowering and has a beautiful scent. The nasturtiums are also flowering profusely. 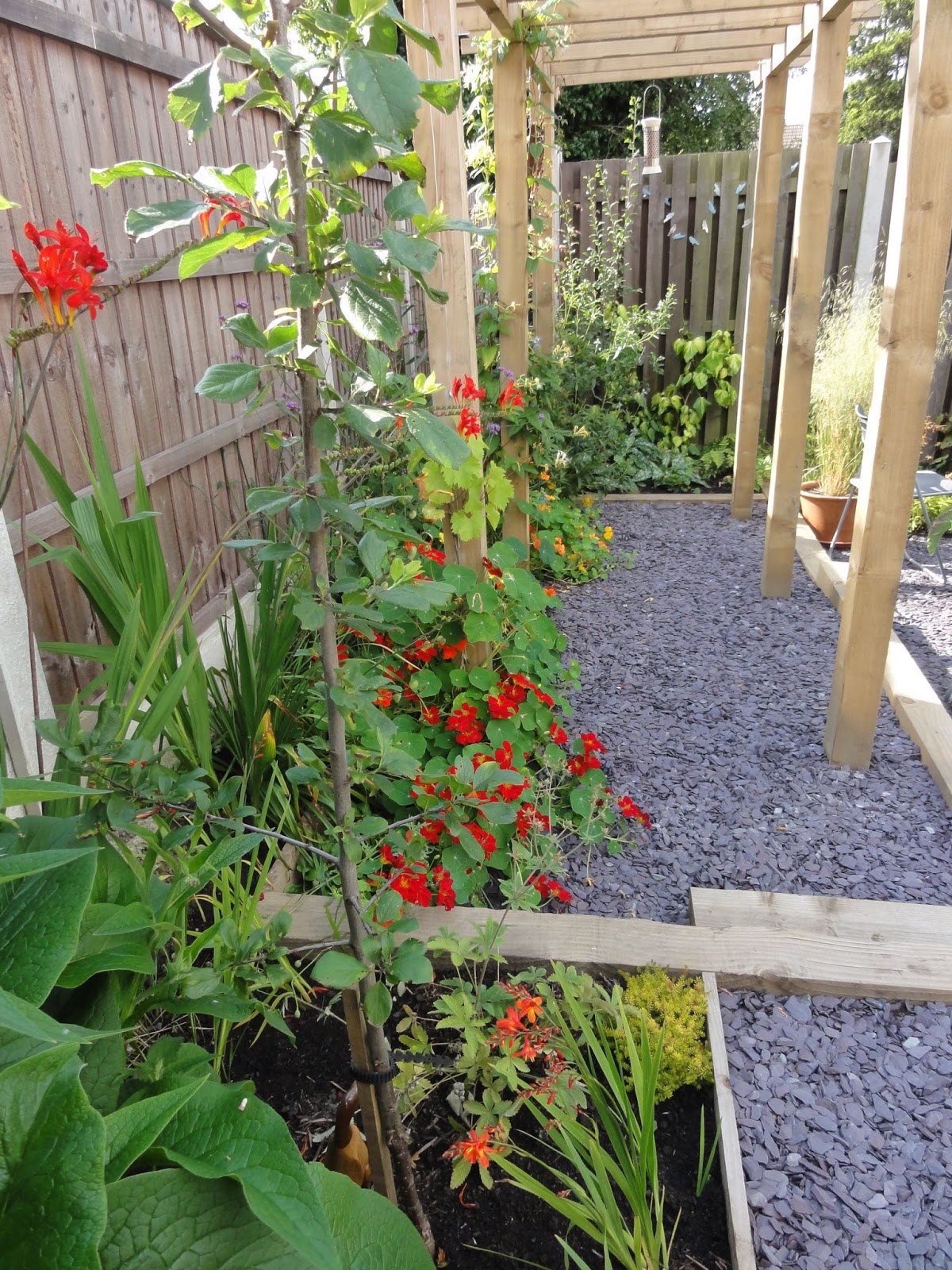 My current favourite flower, Verbena hastata f. rosea, is slightly hidden amongst some of the other plants, but here it is below in detail. 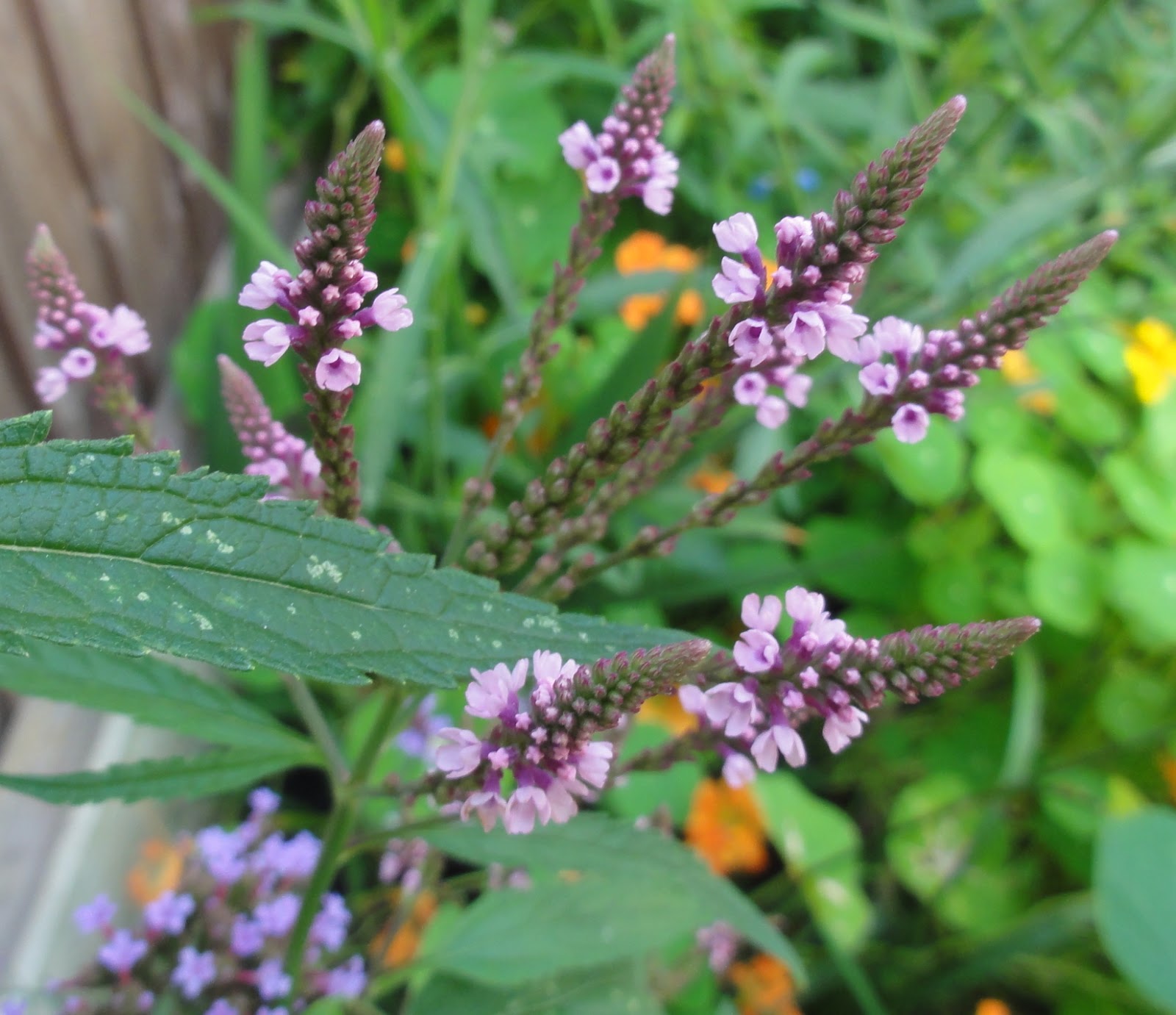 And the bog sage, Salvia uliginosa, is bursting forth with its beautiful light blue flowers. 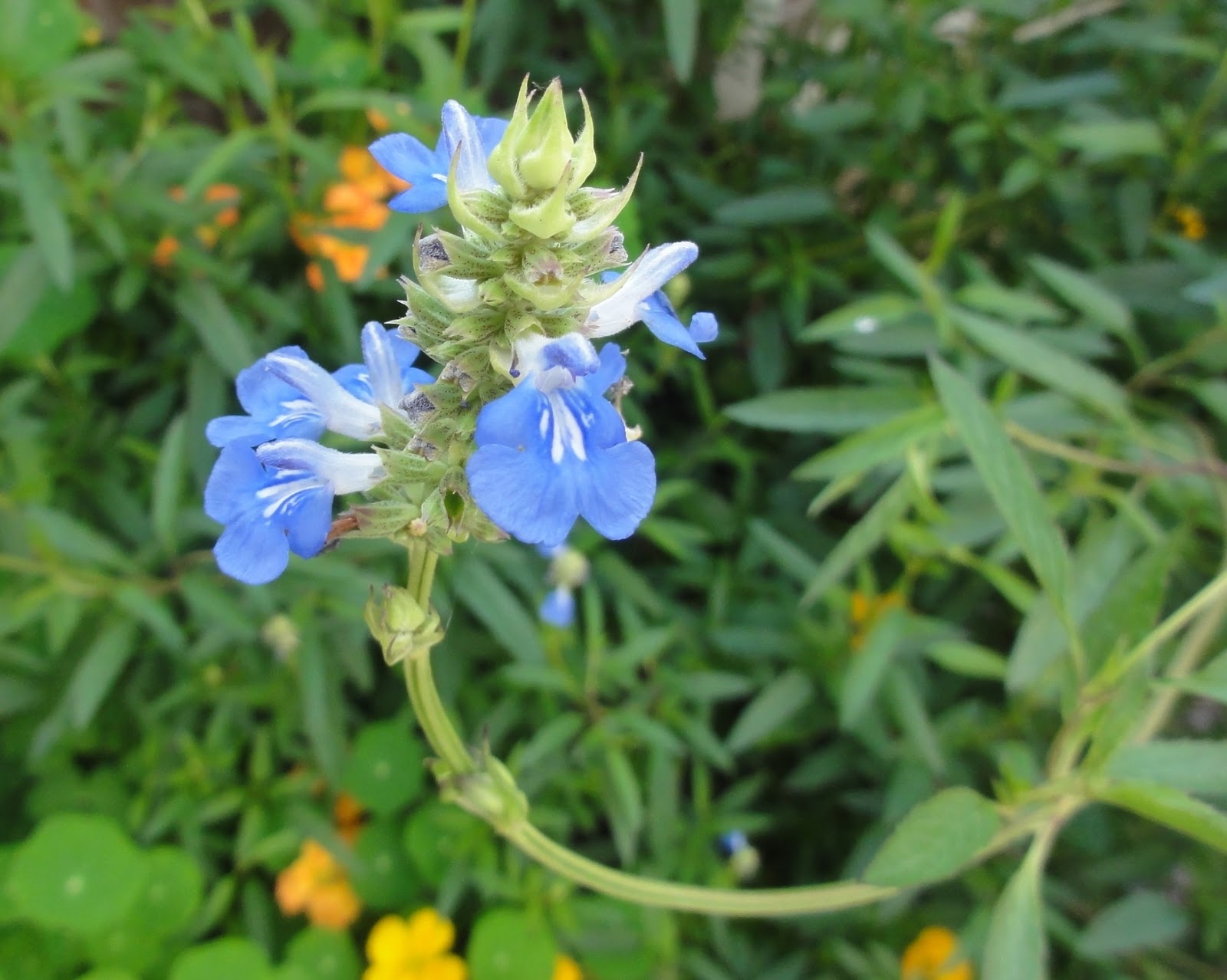 In the kitchen garden, I’ve been harvesting: peas, potatoes (Pink Fir Apple), lettuce, french beans (dwarf ones, the climbing take a bit longer), beetroot, carrots and courgettes. The kale and sorrel is ready to harvest too. 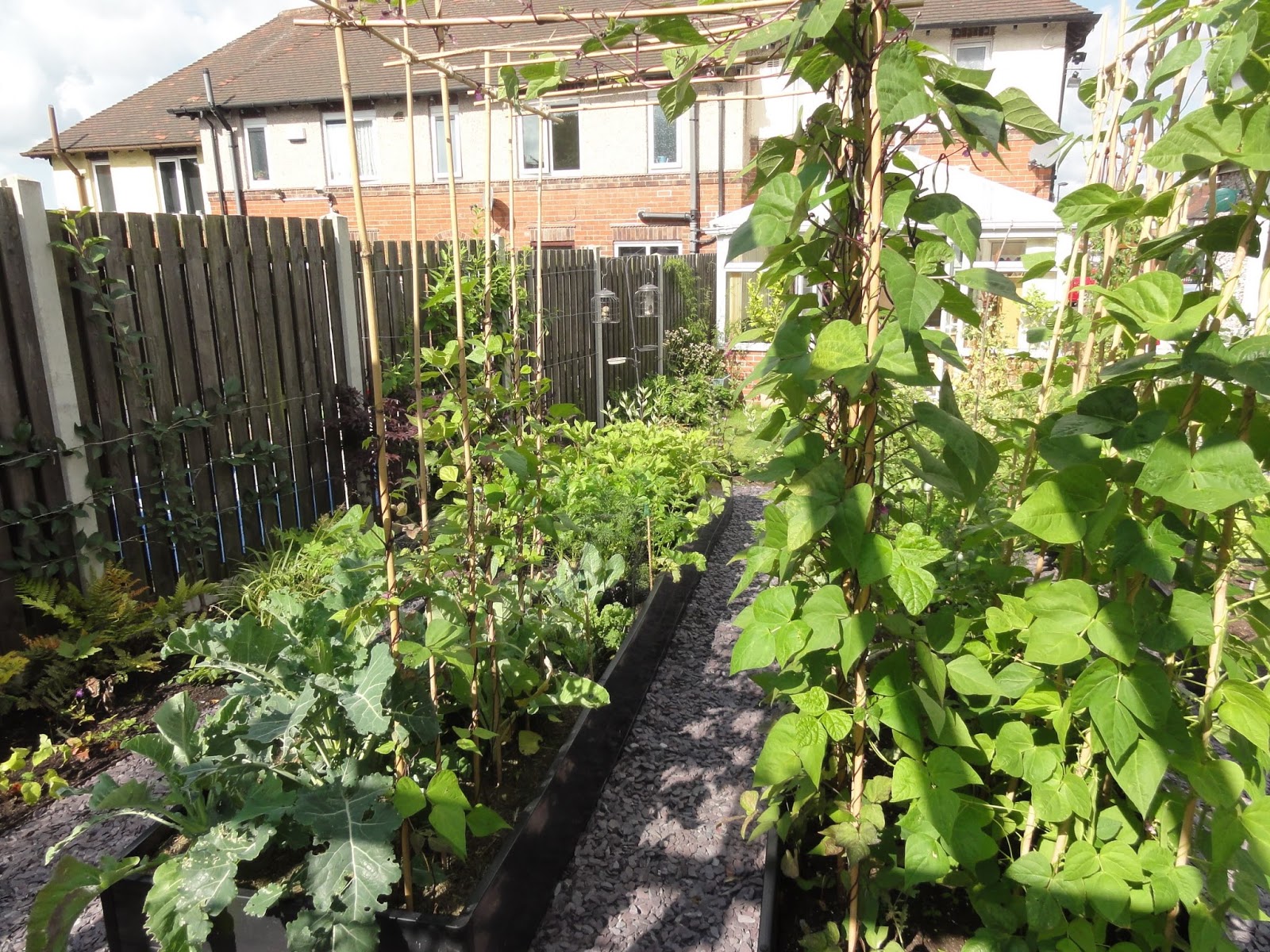 The aubergines and tomatoes are flowering and the first tomatoes are growing, so I’m expect to start harvesting them in August.

I harvested the rest of my garlic in July. As shown at the end of June (photo), the garlic that had been under planted with the broad beans didn’t do well. As you can see below, the garlic not competing with anything else, has done wonderfully. The examples below are Susan Delafield (left) and Martin’s Heirloom (right). My plan for the not so good garlic is to save the bulbs and plant them out in autumn in a new bed with no competition and see what happens. 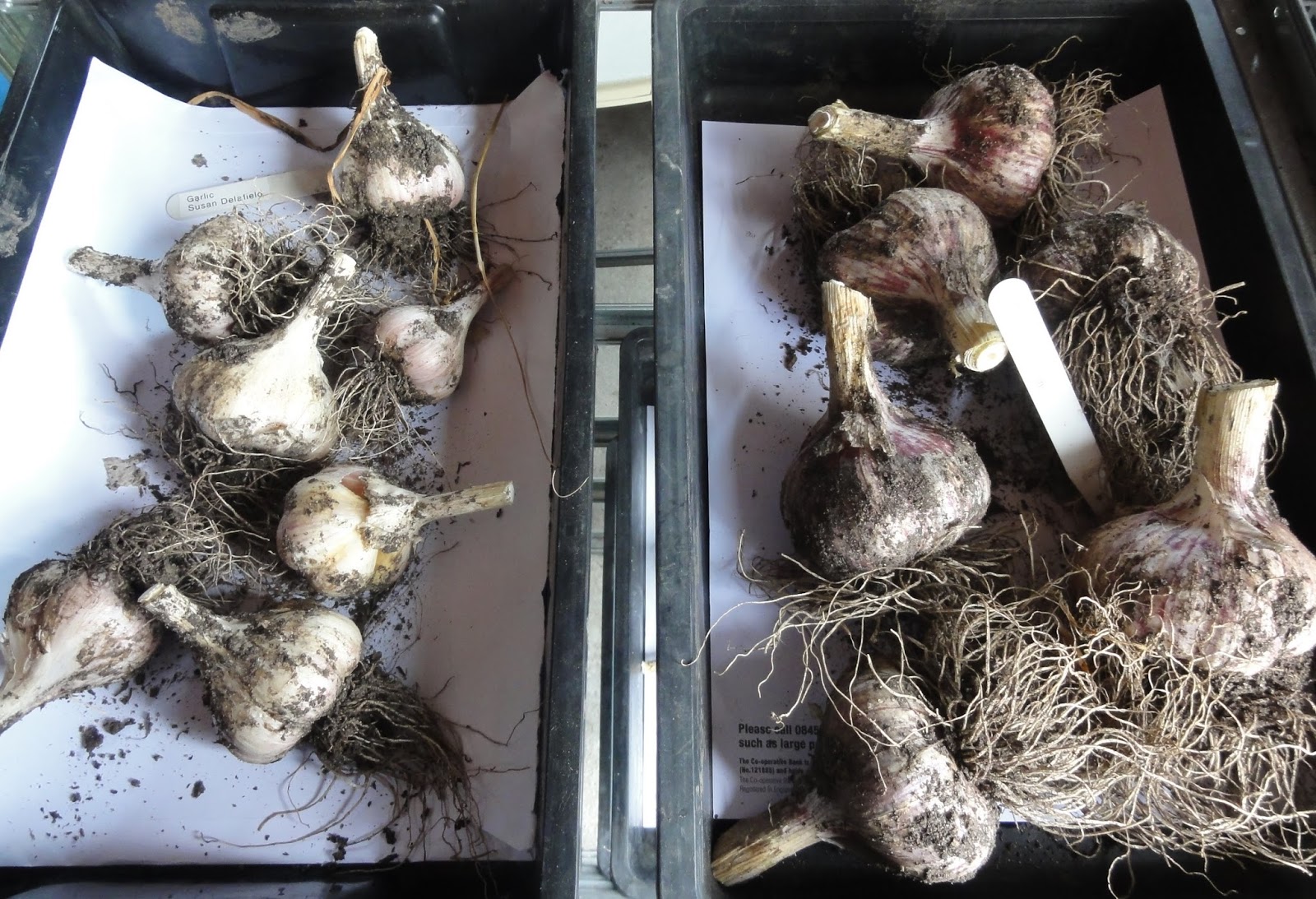 The crop that’s looking amazing, to me, is the Dwarf French Beans ‘Ice Crystal Wax’, below right. They went from being very small plants at the end of June (see photo) to large plants trying to escape from the raised bed and with a multitude of flowers that I expect to be beans in the next couple of weeks. They are a heritage variety, pale yellow, grown from saved seed from my old Oxford garden, and obviously happy in my Sheffield garden. I’m looking forward to a dwarf french bean glut in August! 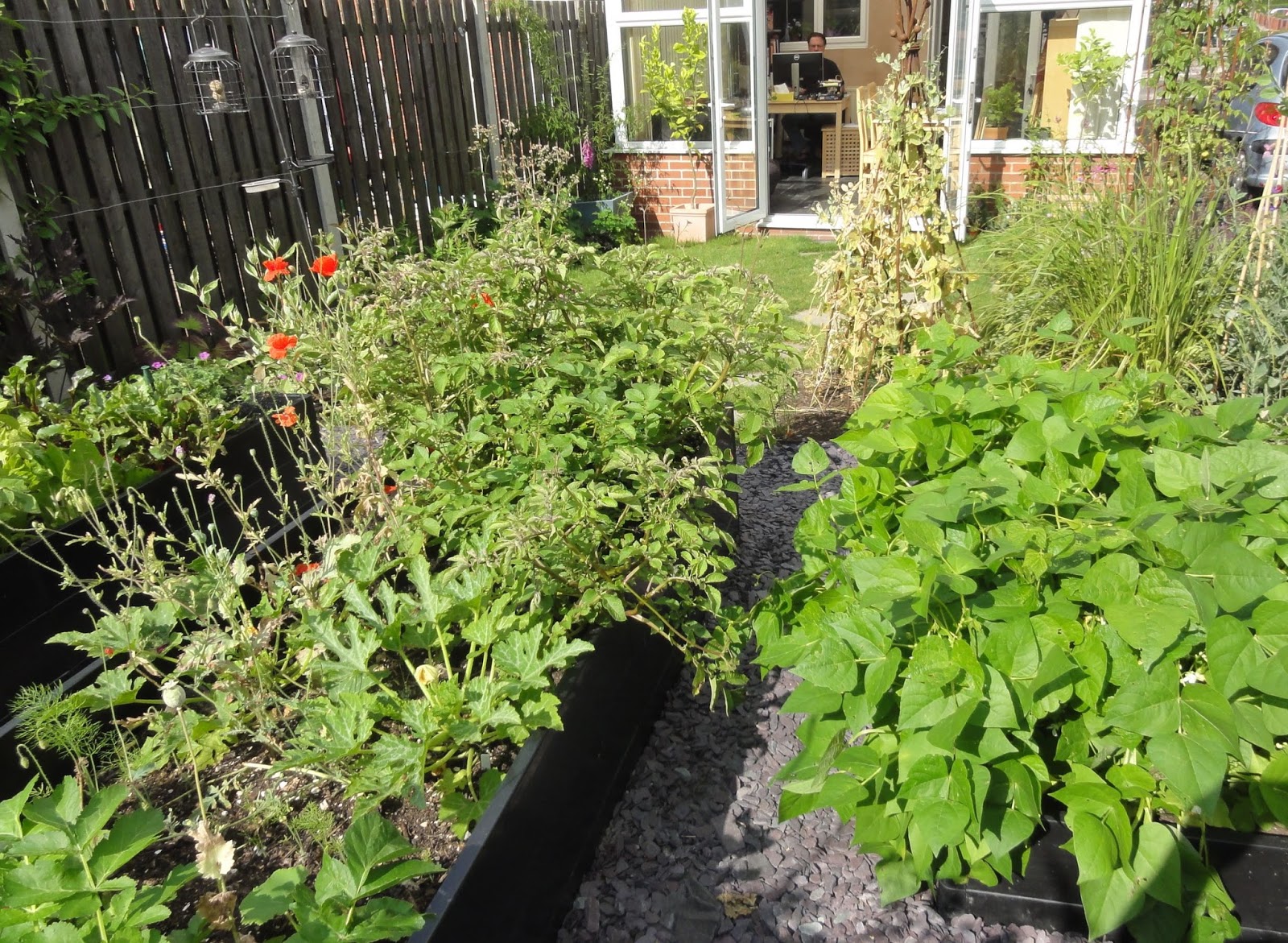 July was a great month in the garden. The only niggle is that I put my lower back out at the end of the month. It’s improving and after a week of not gardening, I am ready to jump into August. 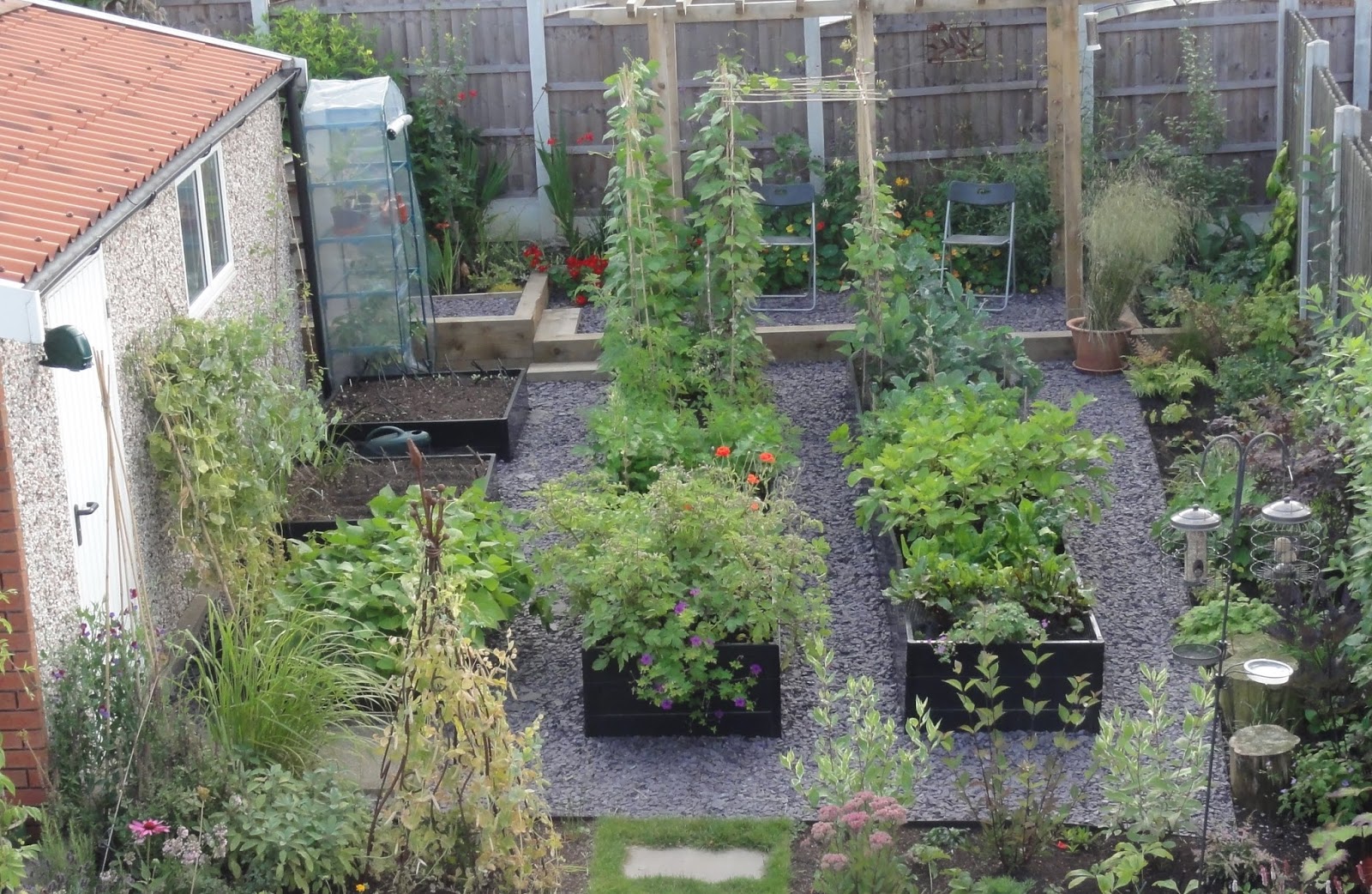 * * * * *
End of month view is hosted by Helen Johnstone, aka @patientgardener. Visit Helen’s blog for her July 2014 EOMV and links to other bloggers EOMV posts.