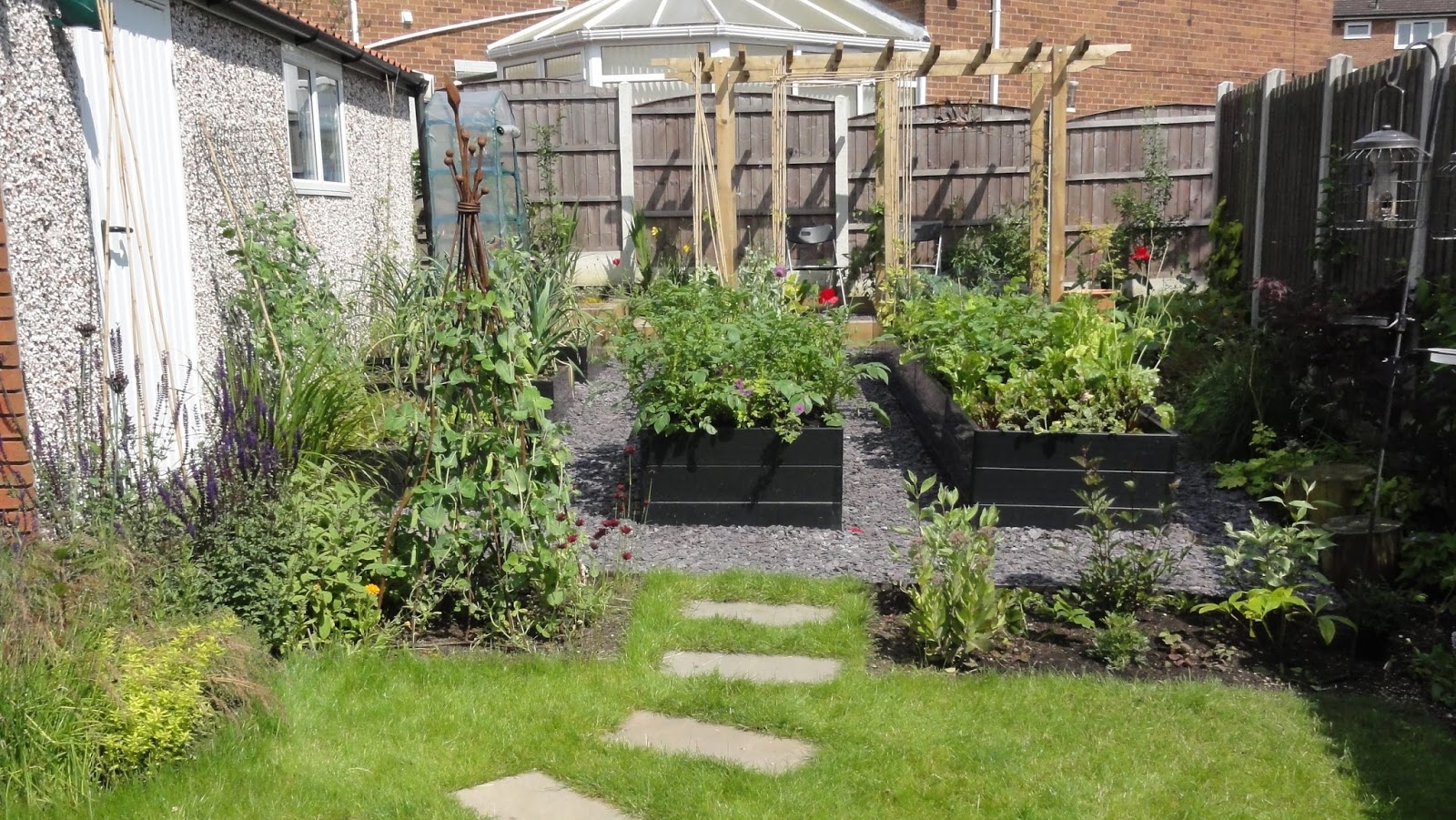 The garden at the end of June

June saw the garden mostly get along without me, as I had other things that took up my time for much of the month. I guess the attention in previous months helped as it does not seem to have suffered from my absence.

In May’s End of Month View post I mentioned problems with water logging in one part of the Long Shady Border. Thanks to readers suggestions and a call to the RHS I quickly dug up the Acer Palmatum ‘Sango-kaku’ as it does not like being damp for long at all. I plan on replanting this further up the boarder where it doesn’t suffer this problem. 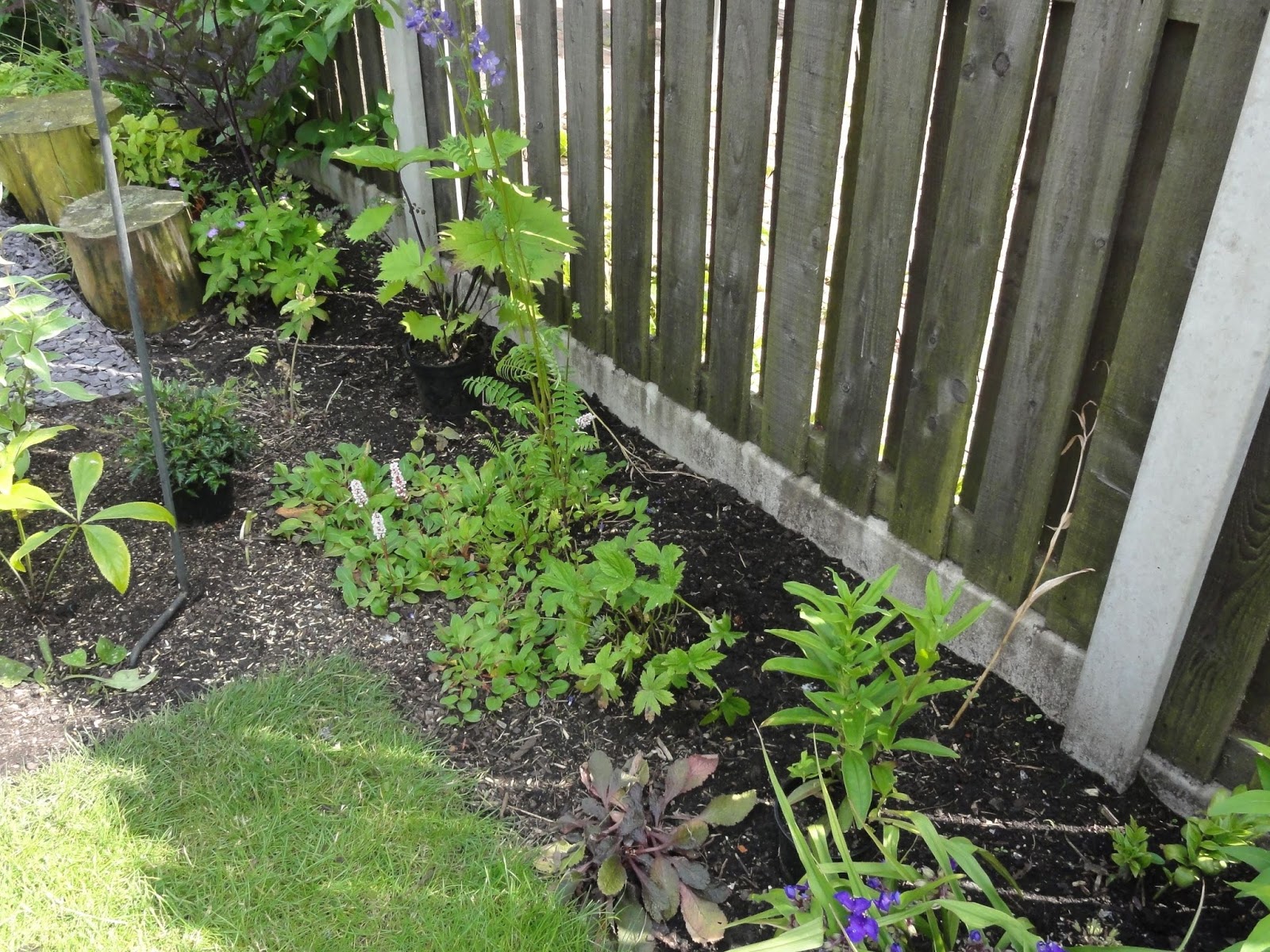 So upon removing the acer, the above is what is left. Well, apart from the plants in pots that I’ve added as I’ve been thinking through how to plant the area now!

From Longstone Hardy Plants, I picked up Ligularia ‘The Rocket’, soapwort Saponaria officinalis ‘Rosea Plena’ and Astilbe simplicifolia ‘Sprite’ to plant in this area, and will also move the Darmera peltata which is further up the border and is happy to have it’s feet wet. I cannot decide whether to move Primula ‘Guinevere’ or not; this is the small straggly purple leaved plant in the above photo. Some Primulas can go a bit straggly for a while after they have finished flowering I have found, so I’m not sure if is the water logging or the normal post-flowering state of the plant that is making it look like this. Hummm.

June did see me finally taking my first harvests, these being of Strawberries and Broad Beans. My strawberry patch isn’t large but has been very fruitful, just in time for Wimbledon too. 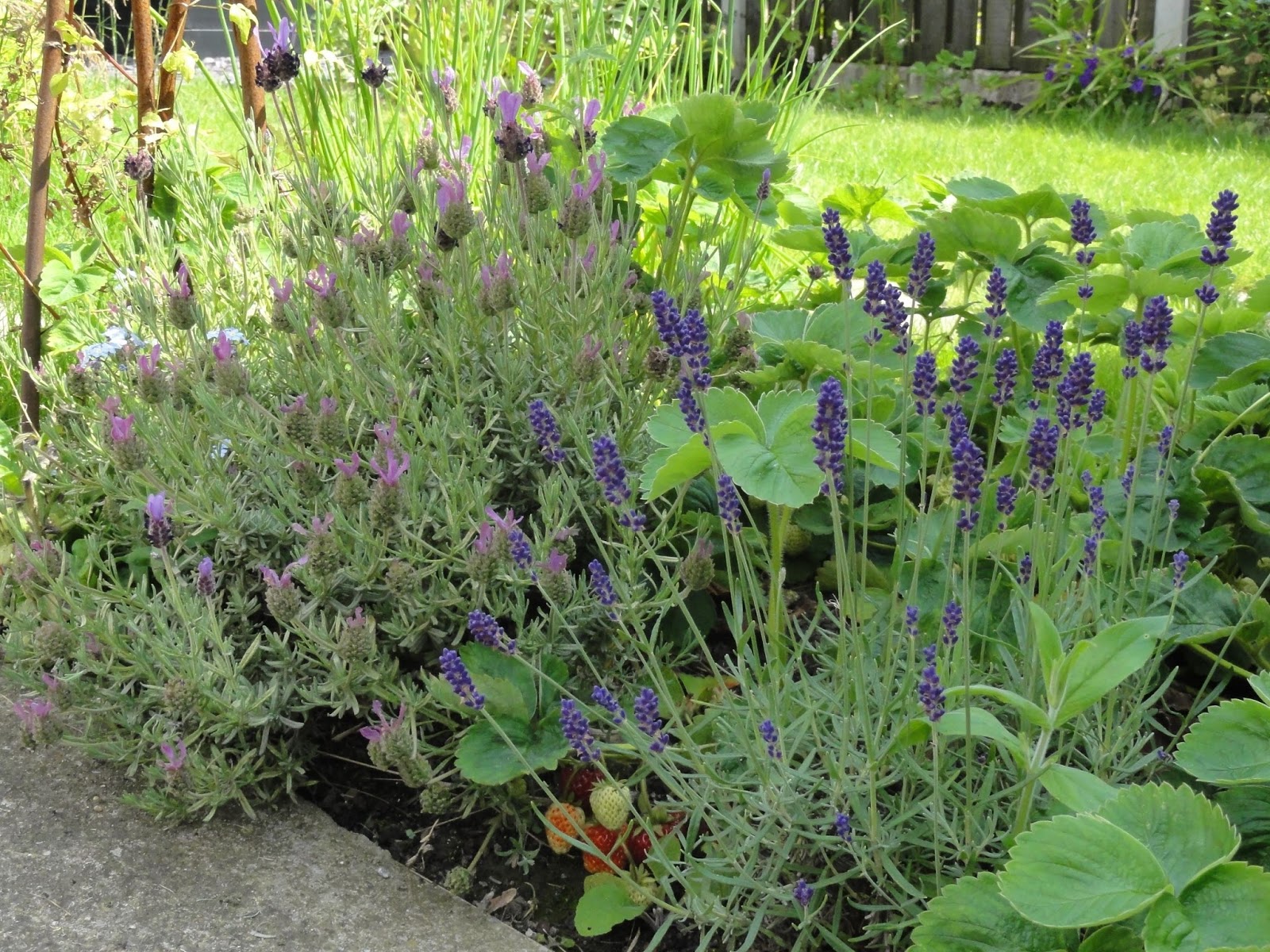 Some of the ‘not yet eaten’ strawberries under the flowering lavenders

I started and completed harvesting the broad beans in June. In a 1m square patch I harvested nearly 2.5kg of (shelled weight) beans, which I think is a pretty good harvest in that space. I’d be curious to know what other vegetable growers think of this. The variety that performed the best was ‘Imperial Green Longpod’, which was so laden with beans that I needed several stakes and lots of string to hold it up! 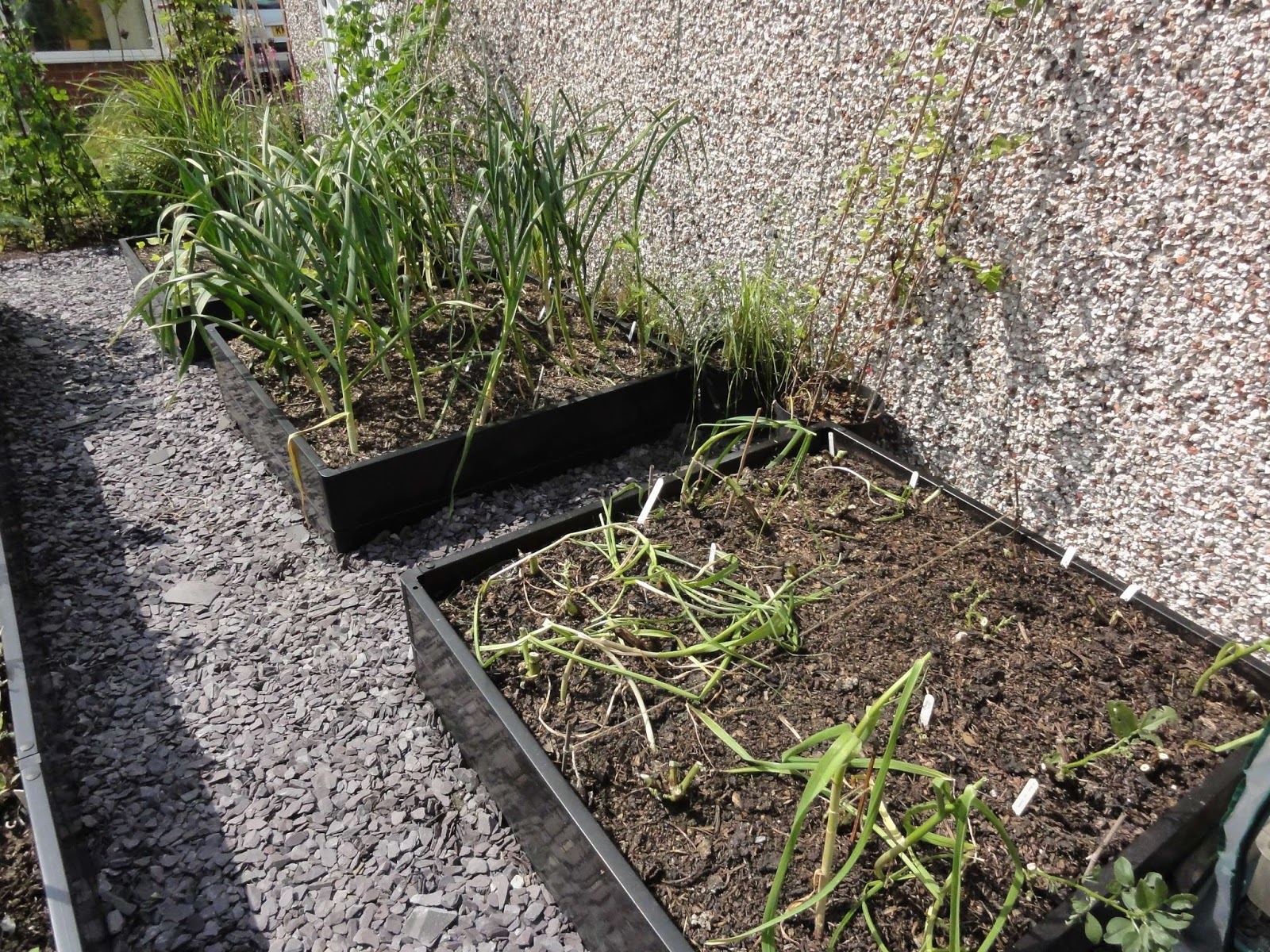 However, a big learning point came out of the broad bean harvest. The garlic that I had sown between the broad bean plants suffered very badly. This was an attempt at inter cropping which failed. The broad beans smothered the garlic and severely limited their growth. You can compare the crop in the bed on the left, which had nothing growing with it and looks large and healthy, to the poor remains in the right bed. Because all the varieties of garlic I grow are not easy to get hold of, I’ve given the failing garlic a feed and am hoping they recover a bit so I can at least save some cloves to try again next year. 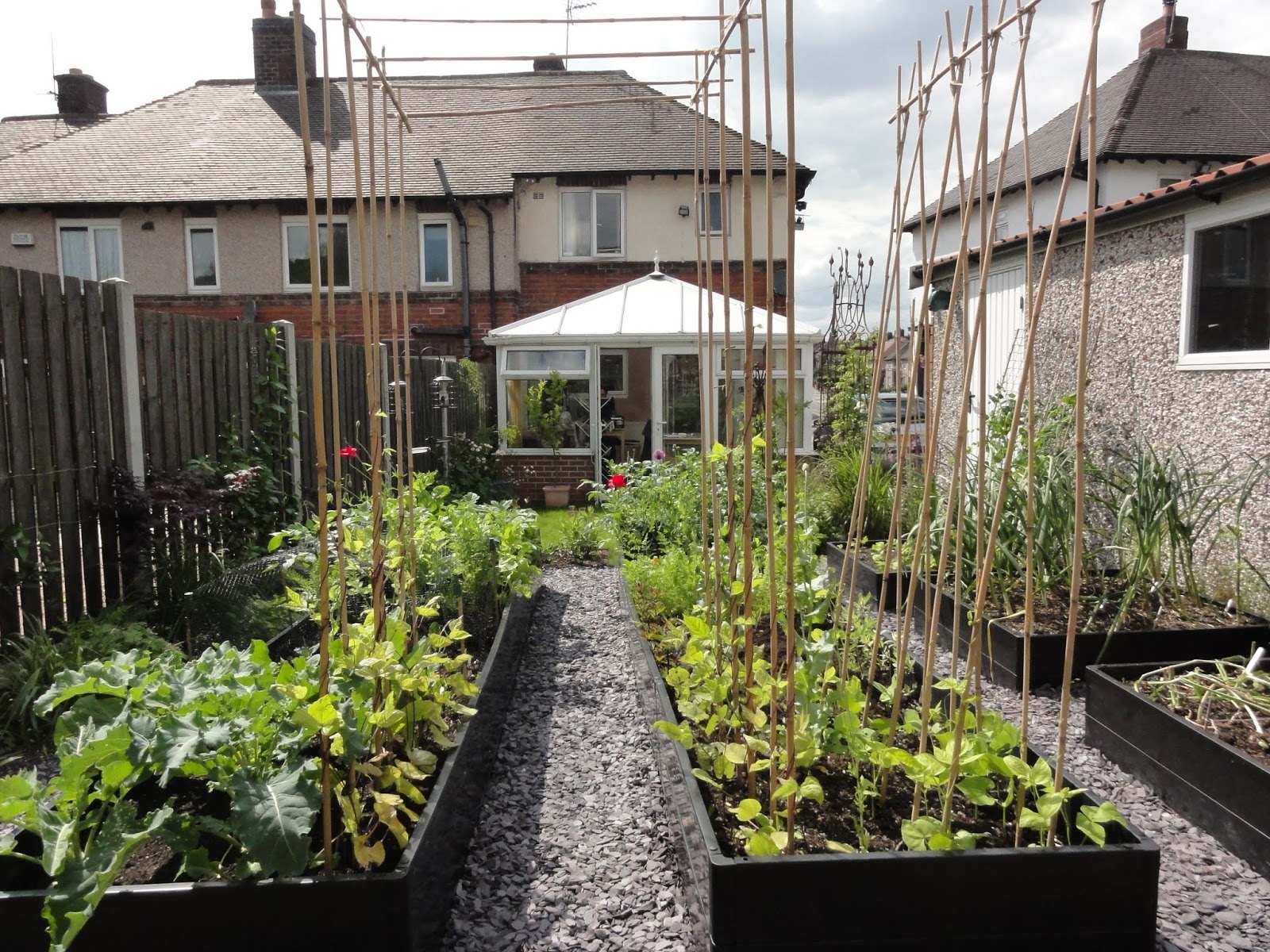 Morning view from the pergola, where I eat my breakfast and enjoy the garden

Crops in the rest of the kitchen garden are doing well. You can see (above) that the climbing french beans have taken off and are quickly climbing up the canes, and the perennial Kale is filling out nicely. And below, as well as on the obelisk in the top photo, Pea Lativan is flowering and fruiting, Lettuce Bronze Arrow, and the Dwarf French Ice Crystal Wax, after a slow start, are looking healthy. I plan on saving seed from all of these. 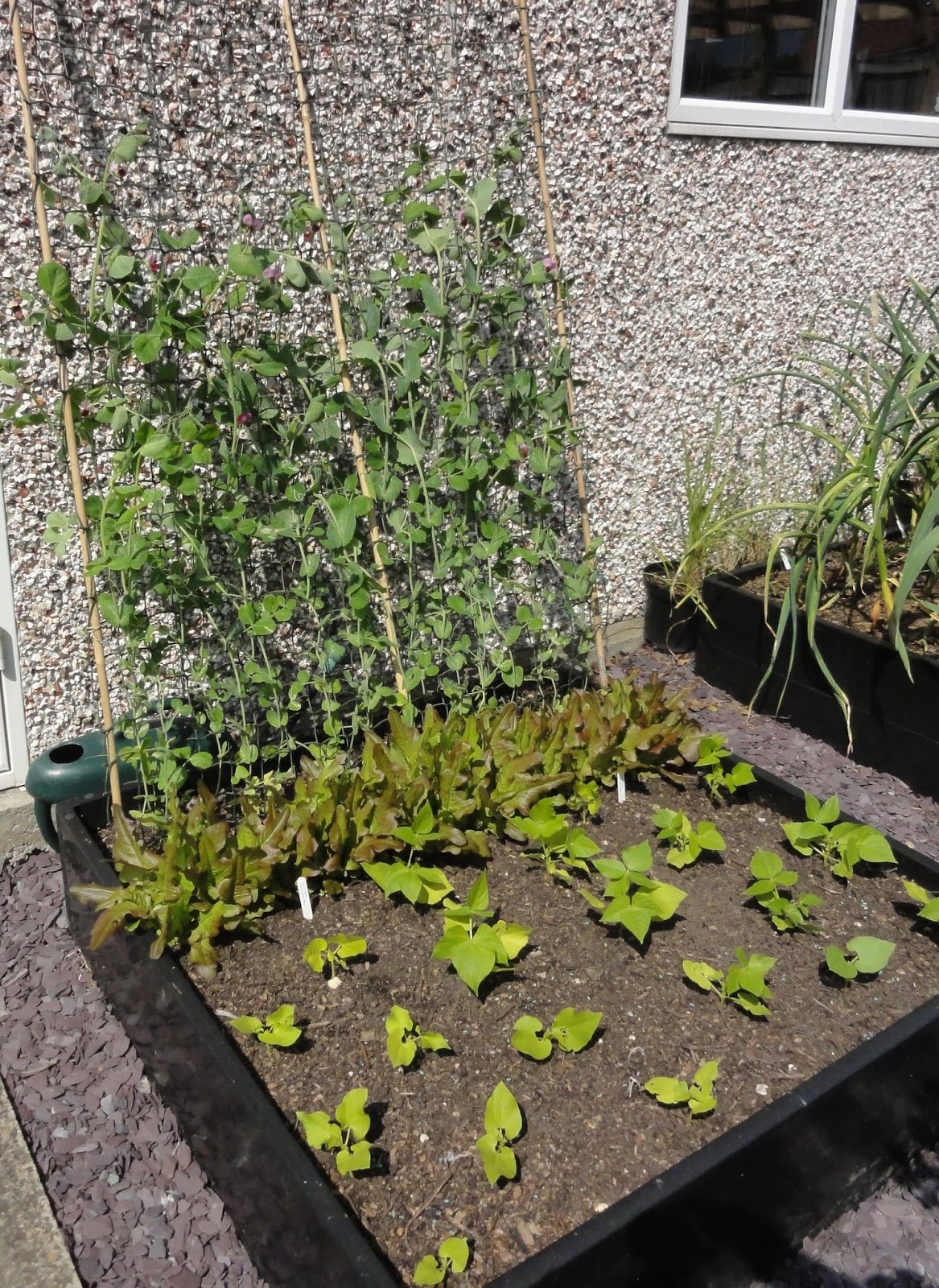 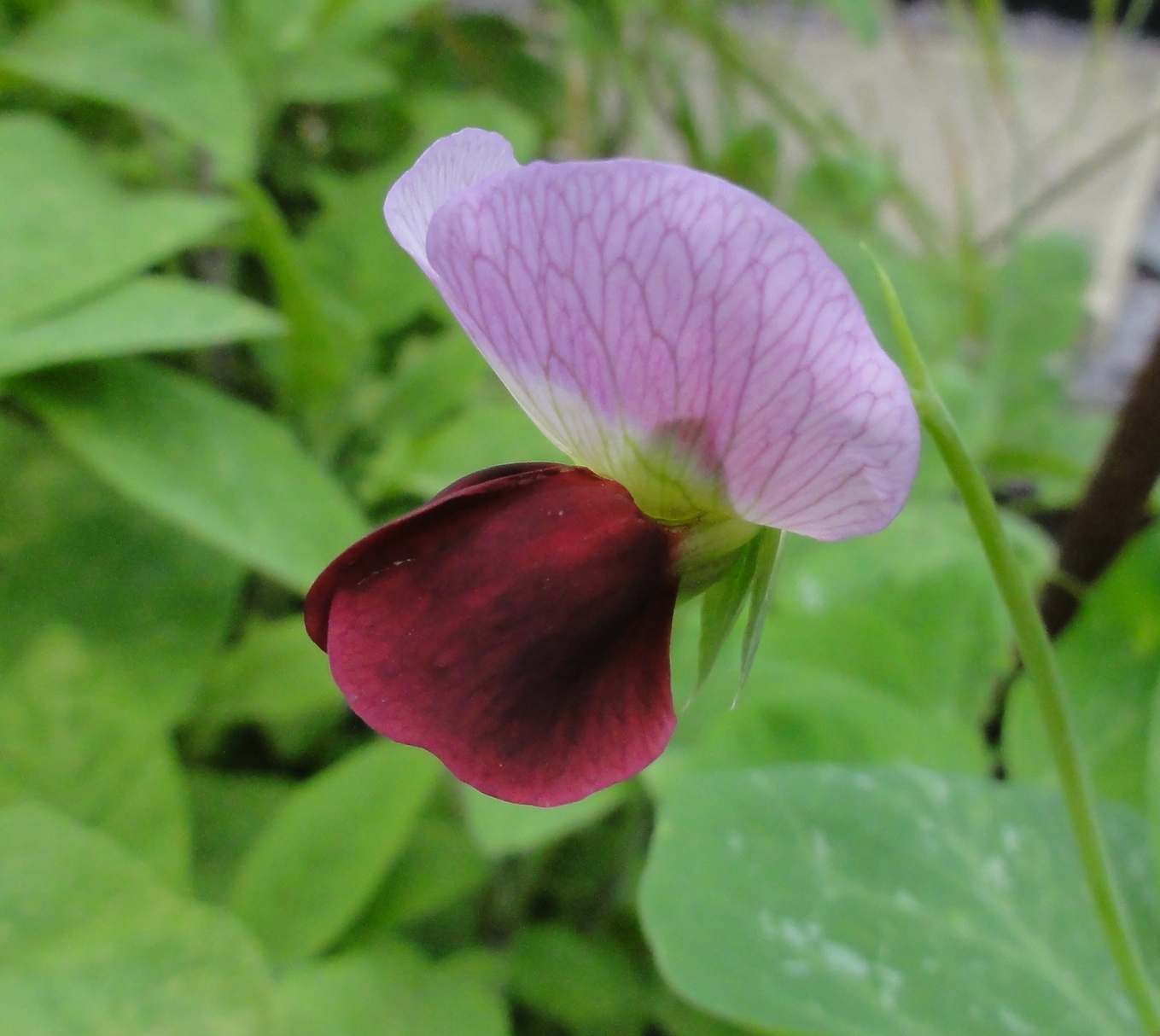 The beautiful flower of Pea Lativan

The plants around the pergola area finally started taking off in June. The grape has been slow to get going, but it was only planted in March. The evergreen honeysuckle, Lonicera similis var. delavayi, only planted in April and growing up the middle support has, however, raced ahead to spread not just up the support, but now curling it’s way into the beams. And it’s already got hundreds of flowering buds which I expect will flower in July. I’m looking forward to that scent. 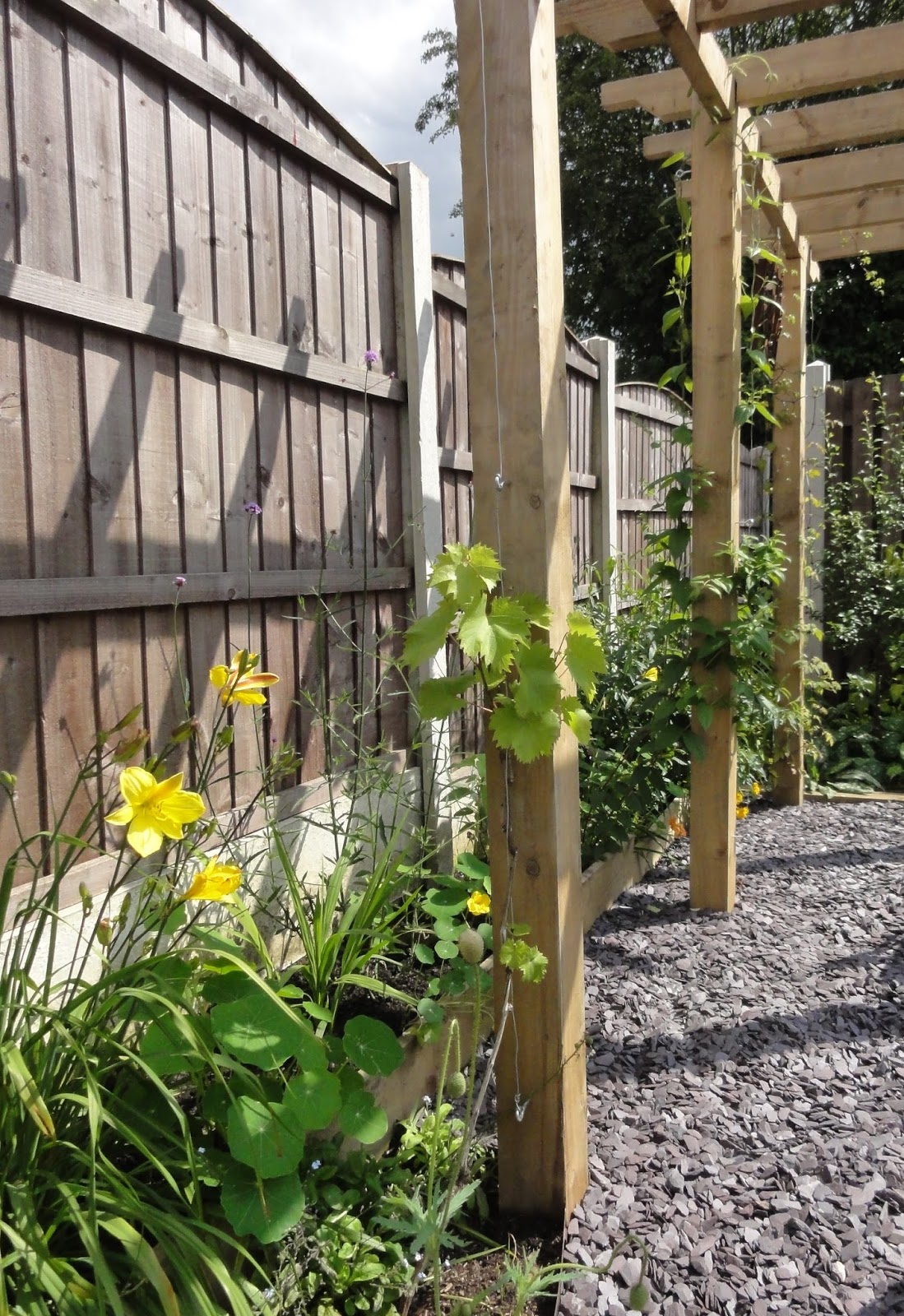 I’m planning on editing plants in the shadiest part of the Long Shady Border (below) in July. The Darmera peltata is being moved down to the area that gets water logged, Acer Palmatum ‘Sango-kaku’ will be added. Some of the Epimediums, grasses and ferns will be moved to be better placed than they are now. 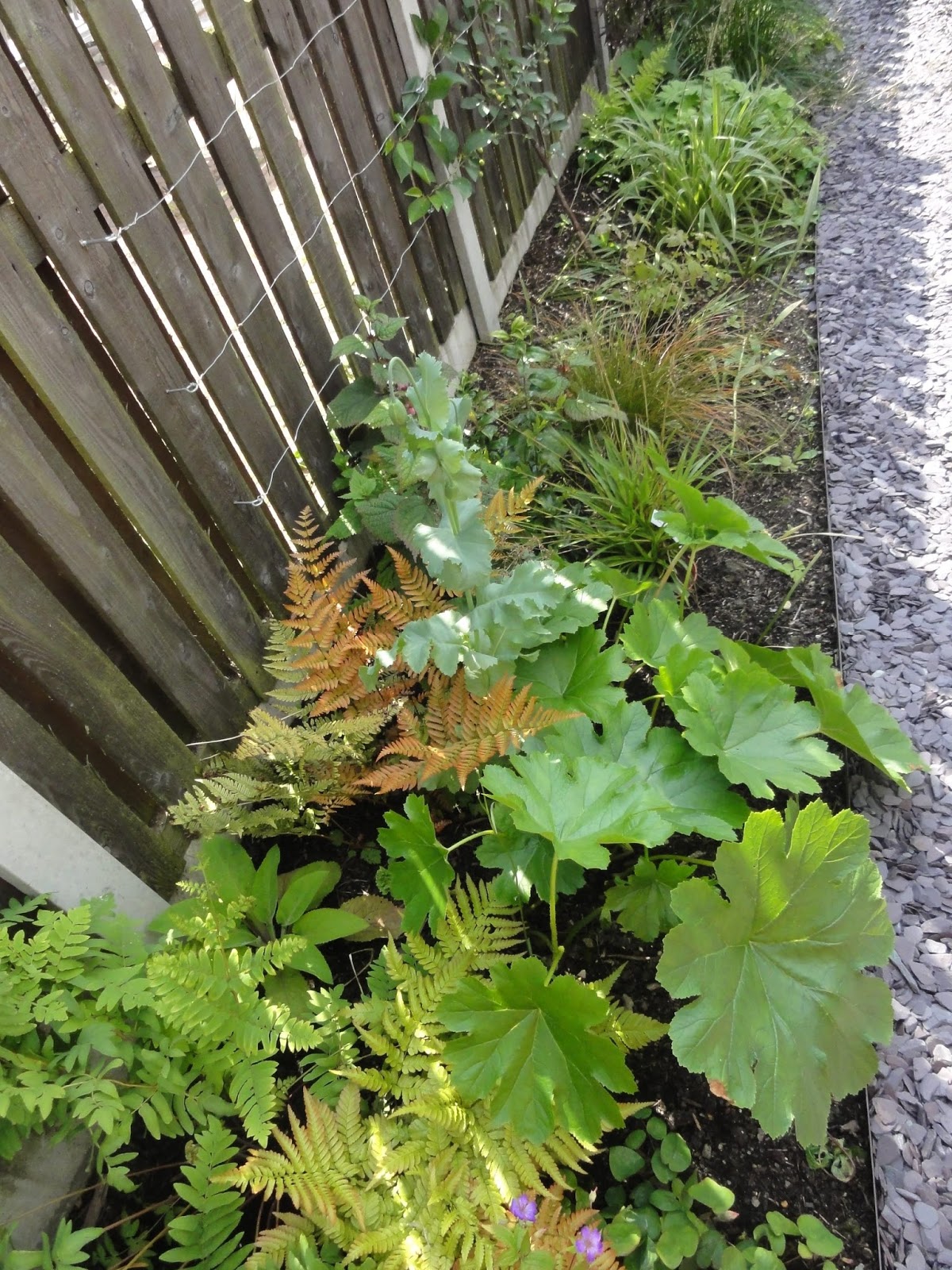 The shadiest end of the Long Shady Border

The Cornus Border, below, is going to be left alone, I hope. I’ll try. I’m facing up to the fact that sometimes you have to stop trying to fill every space and let the plants there to have time to fill out. 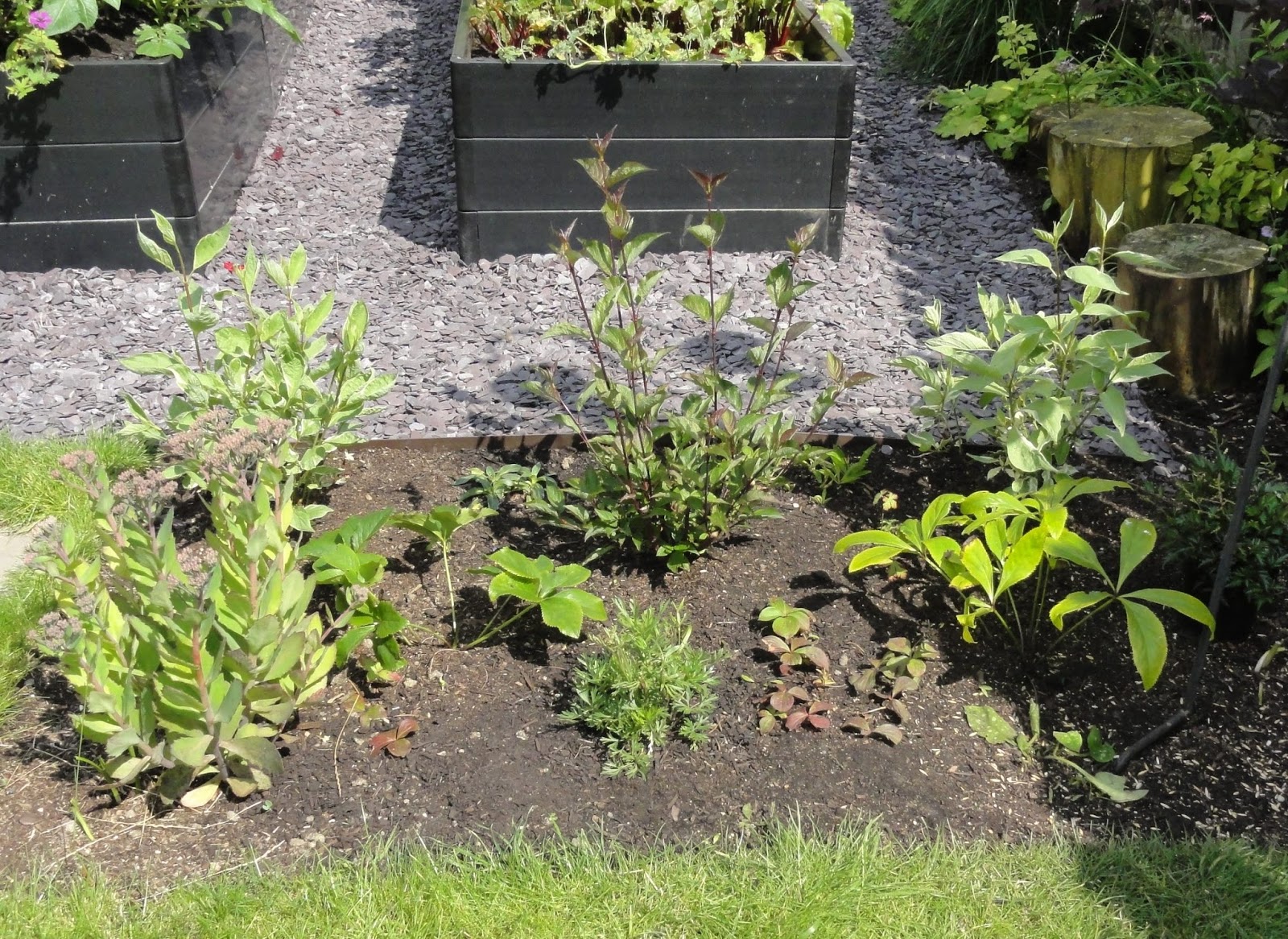 A lot of soil is showing at the moment, but the plants there, such as Cornus canadensis, Anemone multifida ‘Annabella White’ and Veronica gentianoides need time to get going. I was planning on adding some autumn flowering cyclamen and I think will add a few, but otherwise I need to hold my breath and leave the plants to themselves for a while.

The same goes with the Herb Border and around the obelisk. I am going to remove the grass Deschampsia cespitosa ‘Goldtau’ as I don’t think it works in the space at all and just leans all over the Golden Oregano and French Tarragon. I will fill that space with Valeriana officinalis, but otherwise, apart from adding, once again, autumn flowering cyclamen to the area around the obelisk, I think I need to leave it alone. Oh, I do want to add more tall alliums too, but then that’s it. Right. 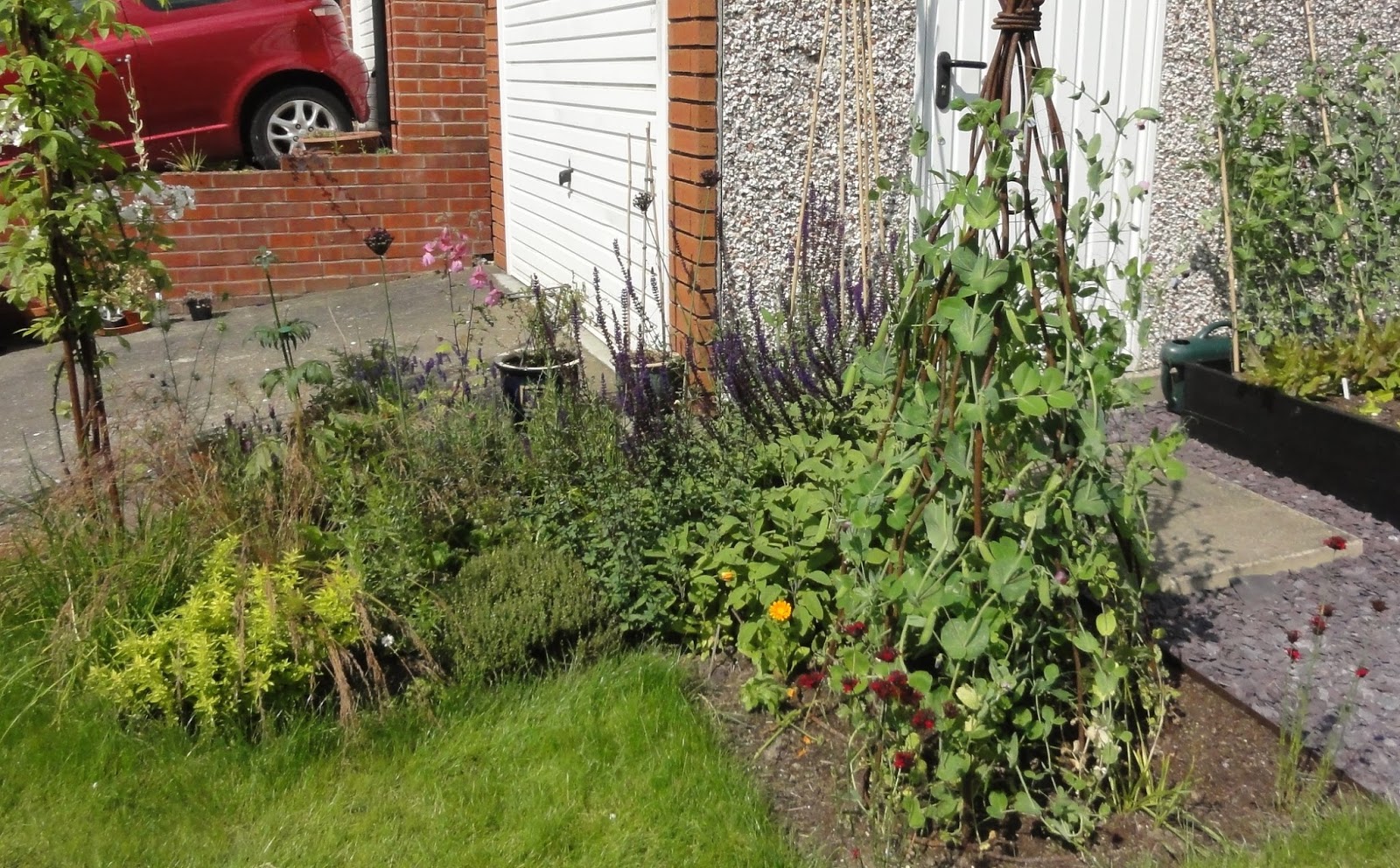 I will finish the June end of month view with some of the flowers I love that were flowering as the month ended. 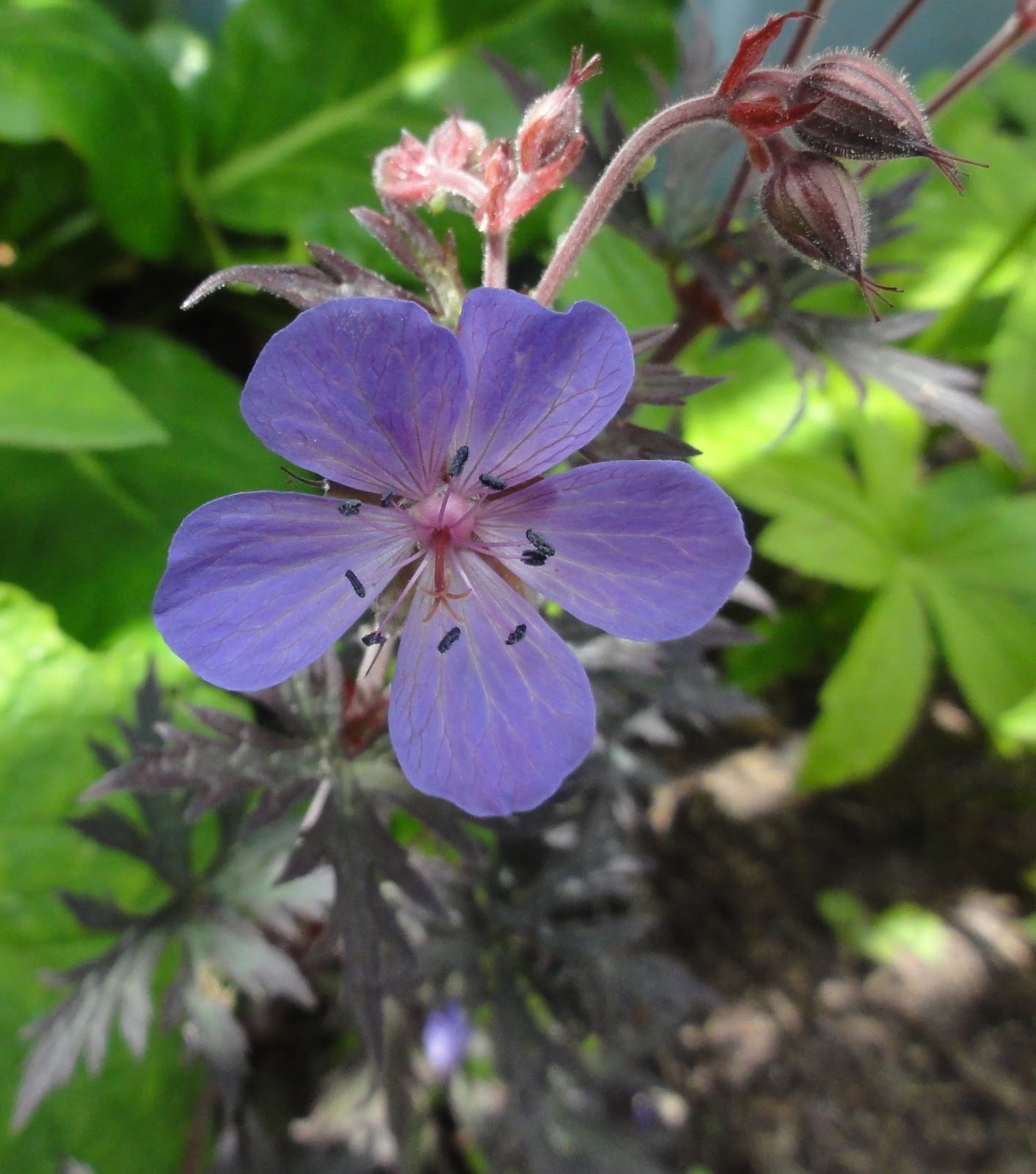 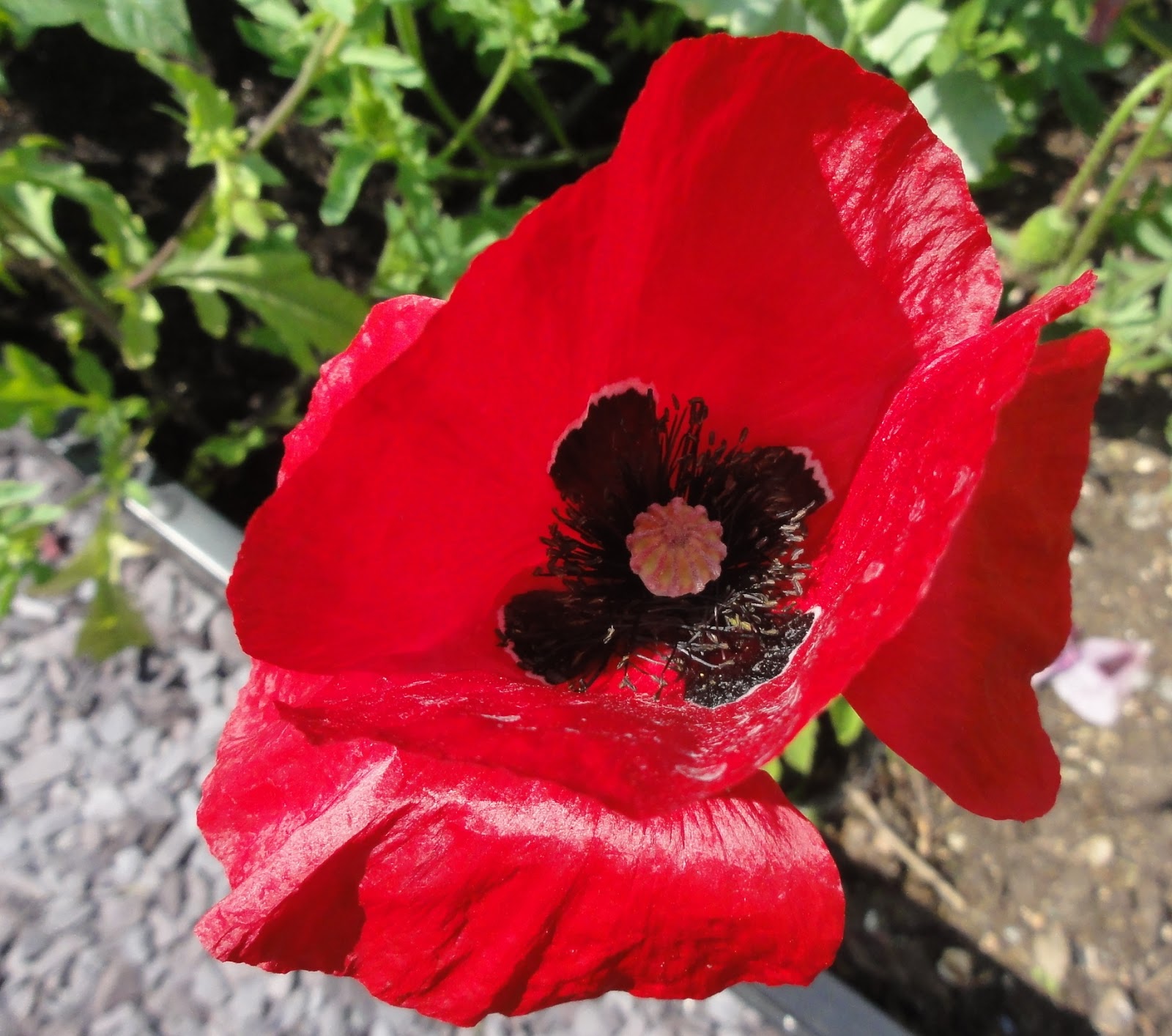 I love the colour and the way this poppy shimmers in the sun. Self-seeded in one of the veg beds. 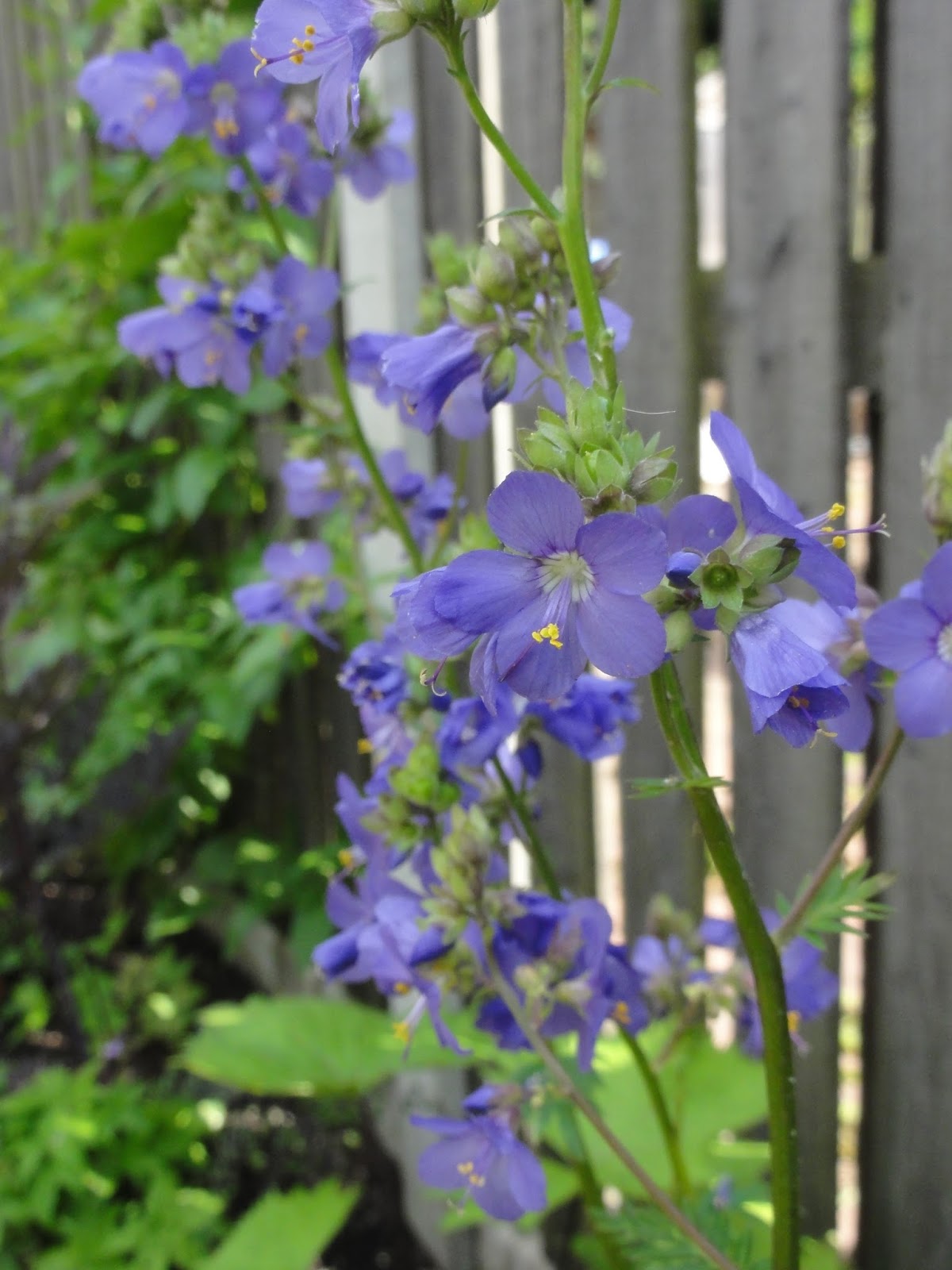 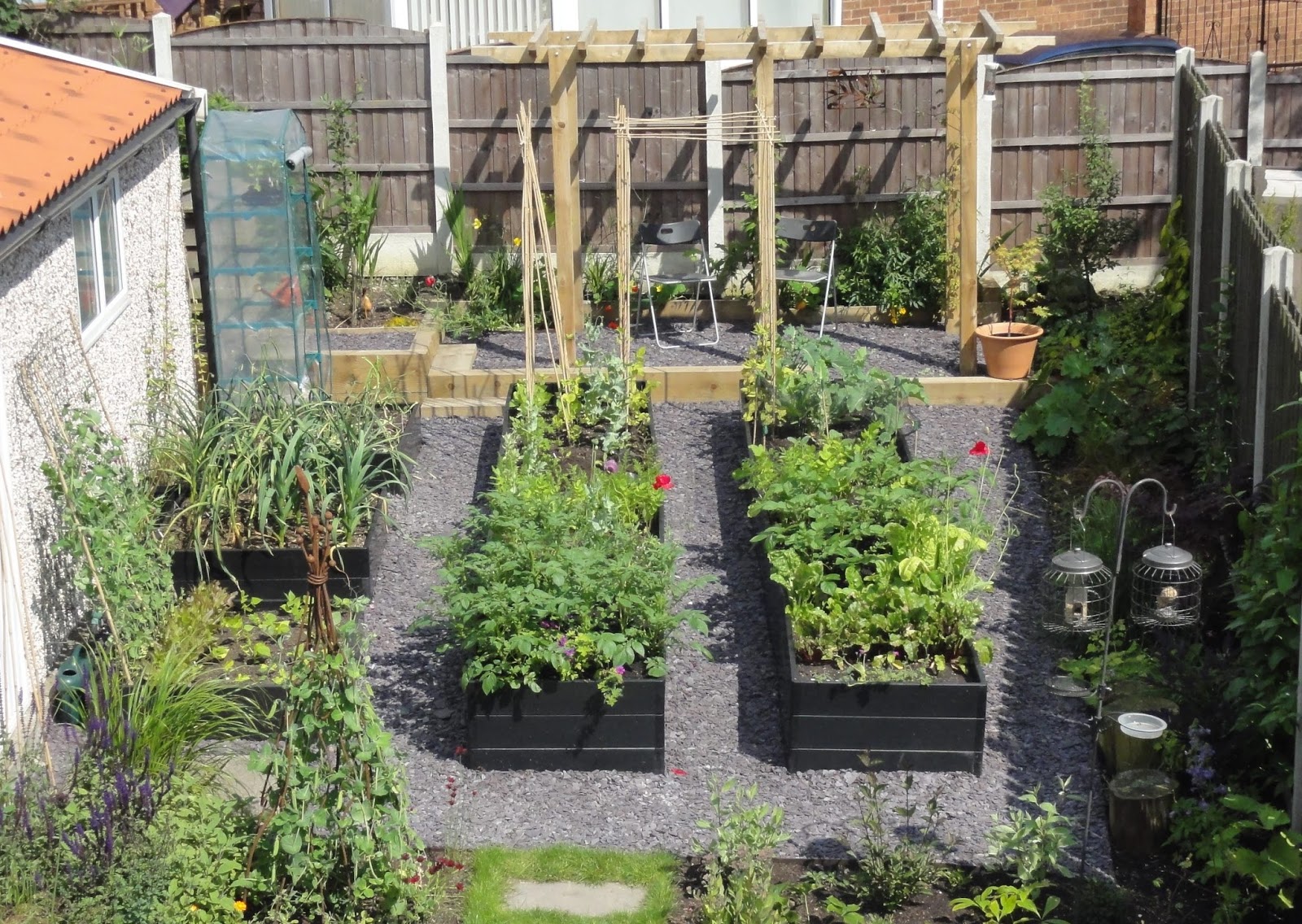 Overview of the garden from the study

* * * * *
End of month view is hosted by Helen Johnstone, aka @patientgardener. Visit Helen’s blog for her Jun 2014 EOMV and links to other bloggers EOMV posts.