Well yes, I am a bit late for EOMV, but my excuse is that I was in Paris at then end of May and beginning of June, so am late. Not a bad excuse eh?!

I’m still very (ME) tired from the holiday, and since this won’t pass for a few days, I’ve decided to mainly do a EOMV in pictures. I do have one specific area I will talk about (see Waterlogging, below), and am hoping for feedback and advice from my lovely fellow gardeners and bloggers. *hopeful face* (as we say on Twitter). 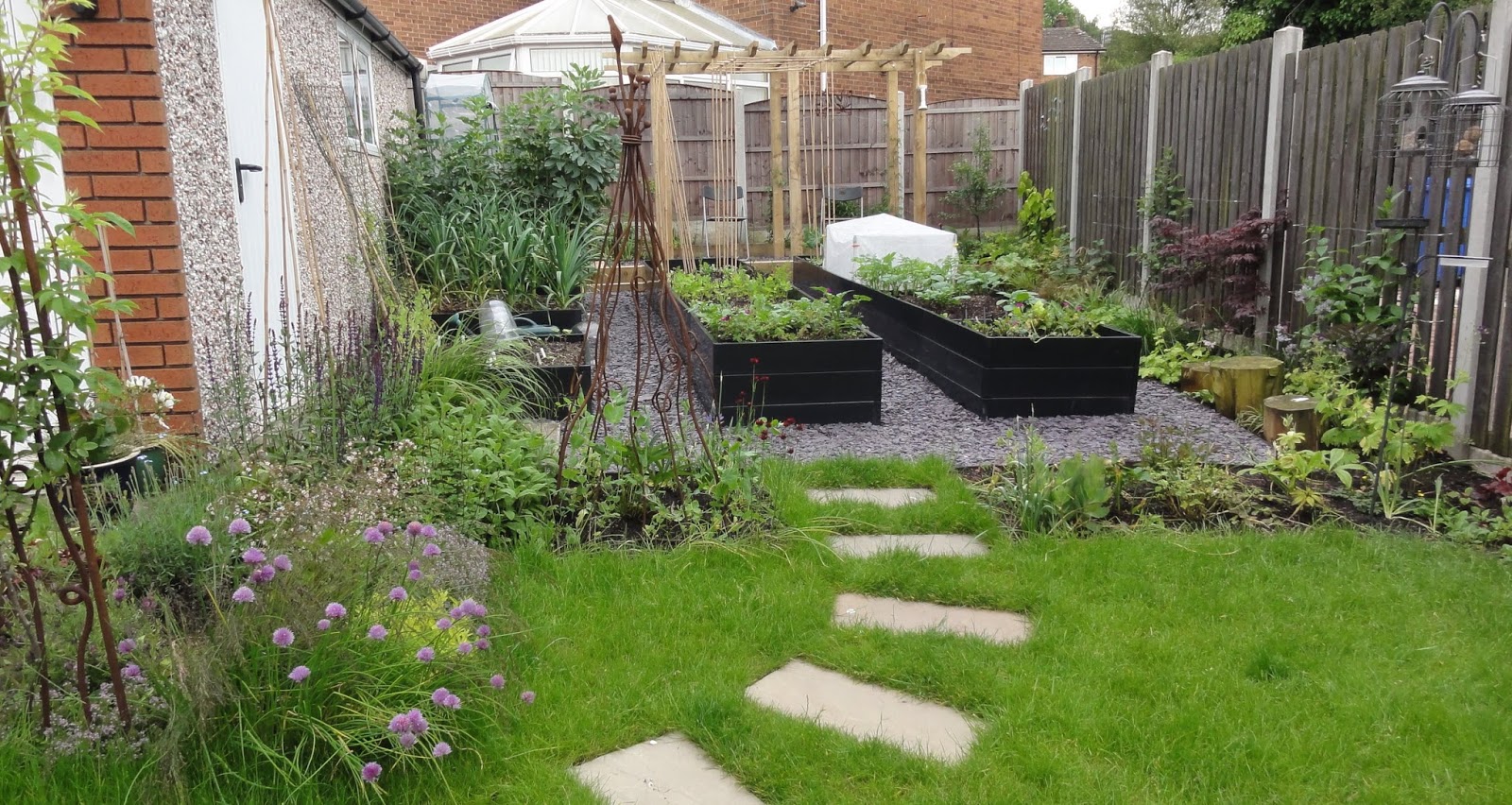 Overview from left side of garden. 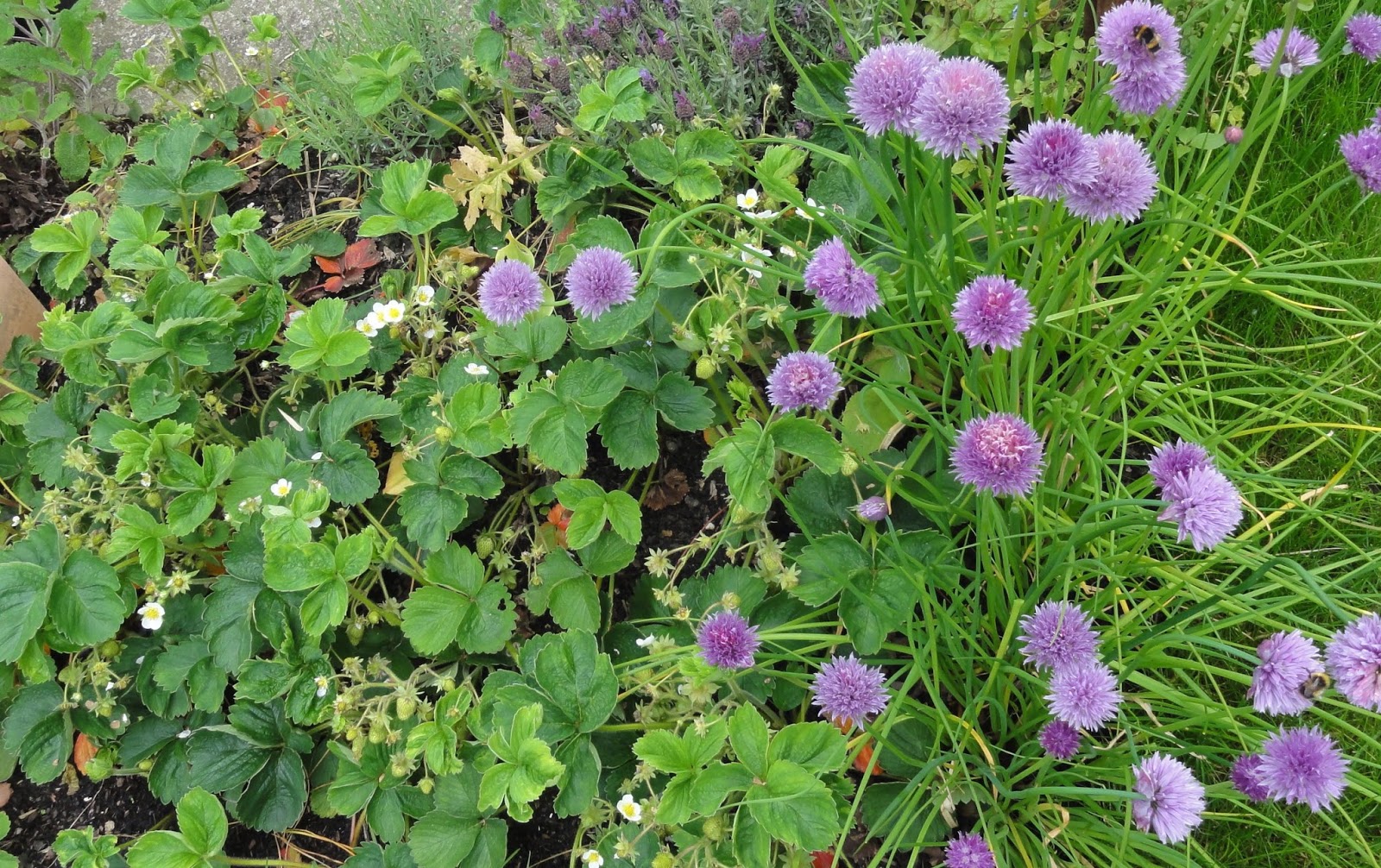 Strawberry bed with lots of green strawberries, holding off for Wimbledon I expect. 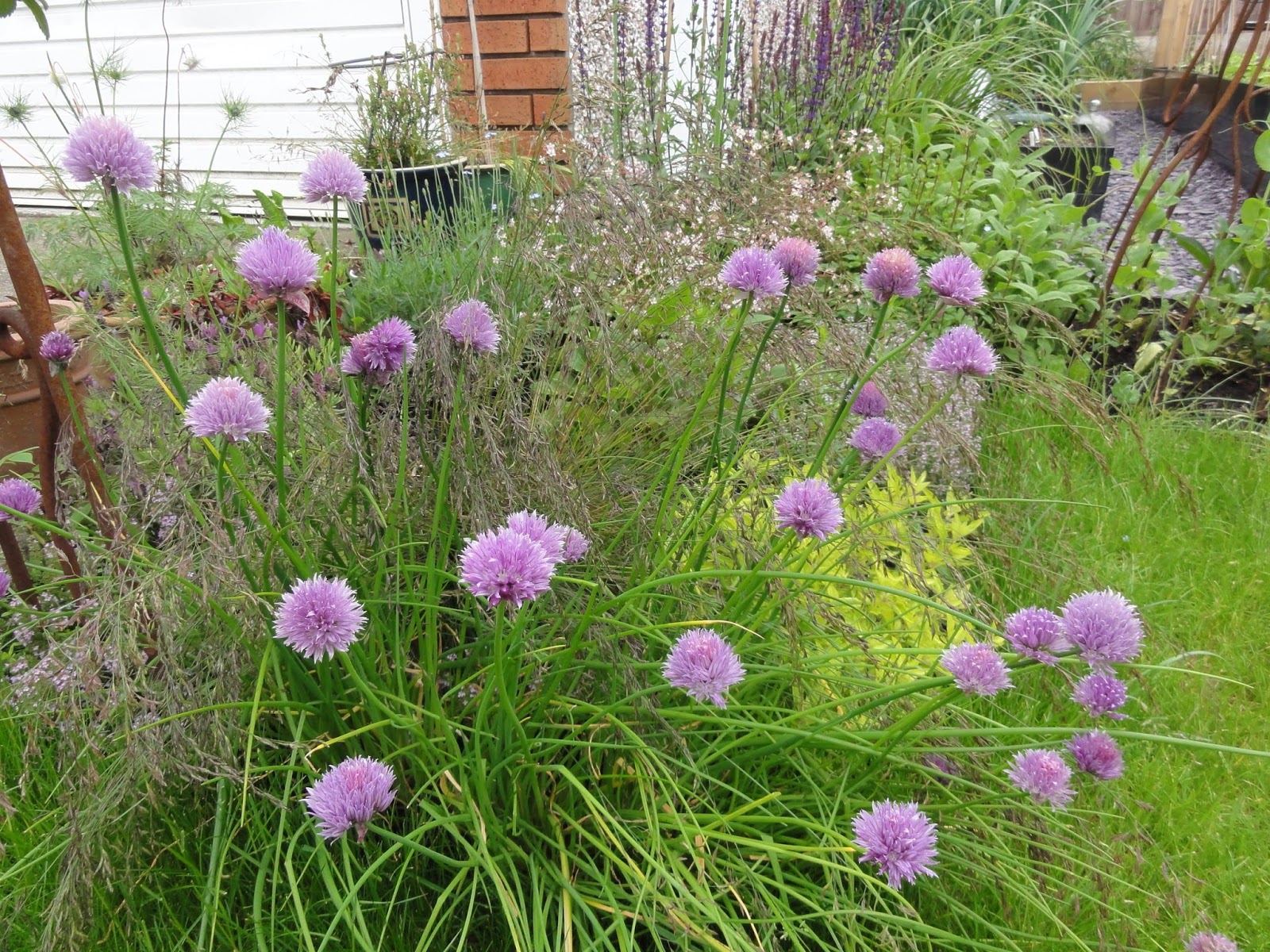 Herb Border, rather dominated by the Chives from this angle.
But I do love the chives, as have the bees! 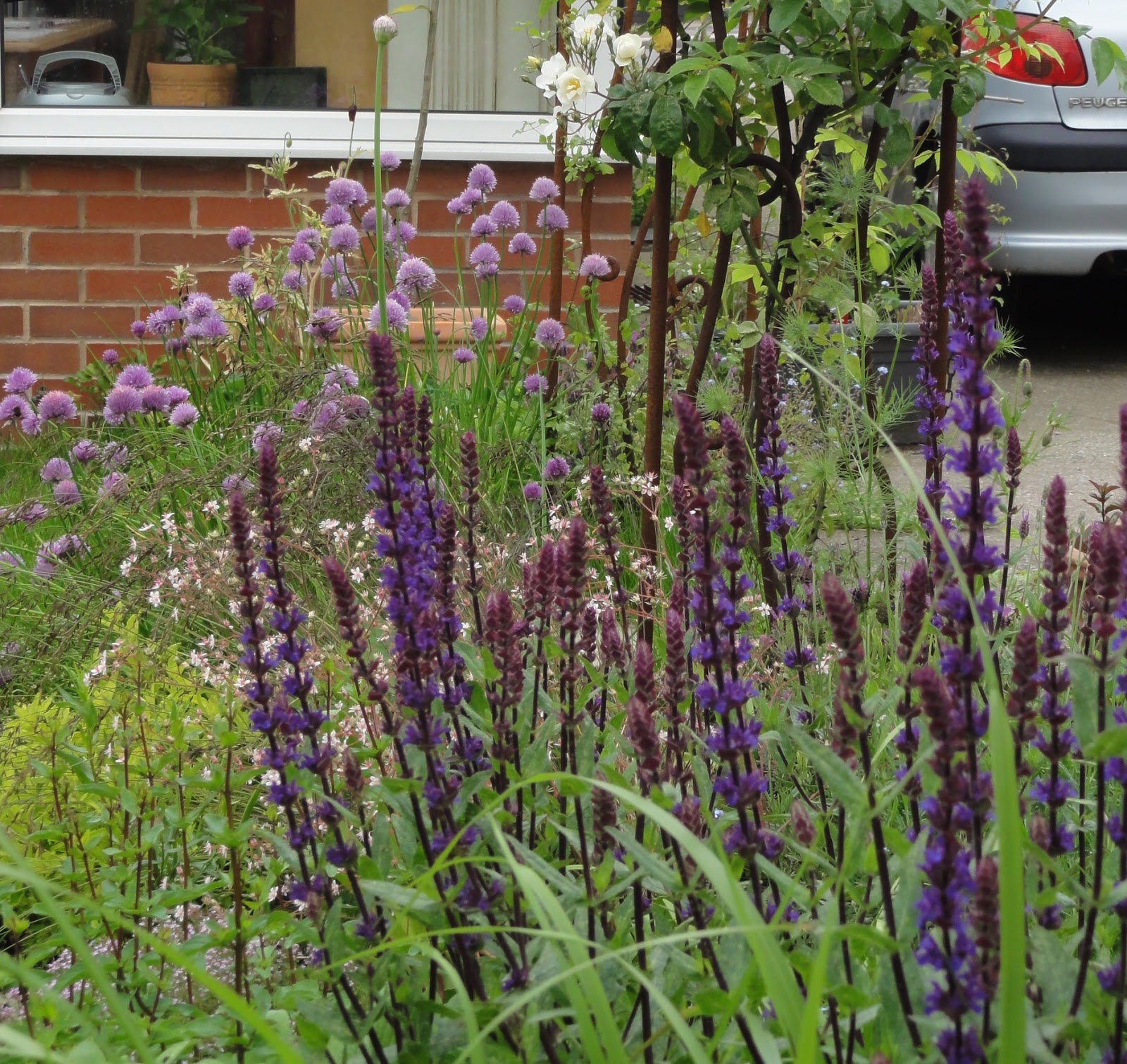 Alternative view of the Herb Border. 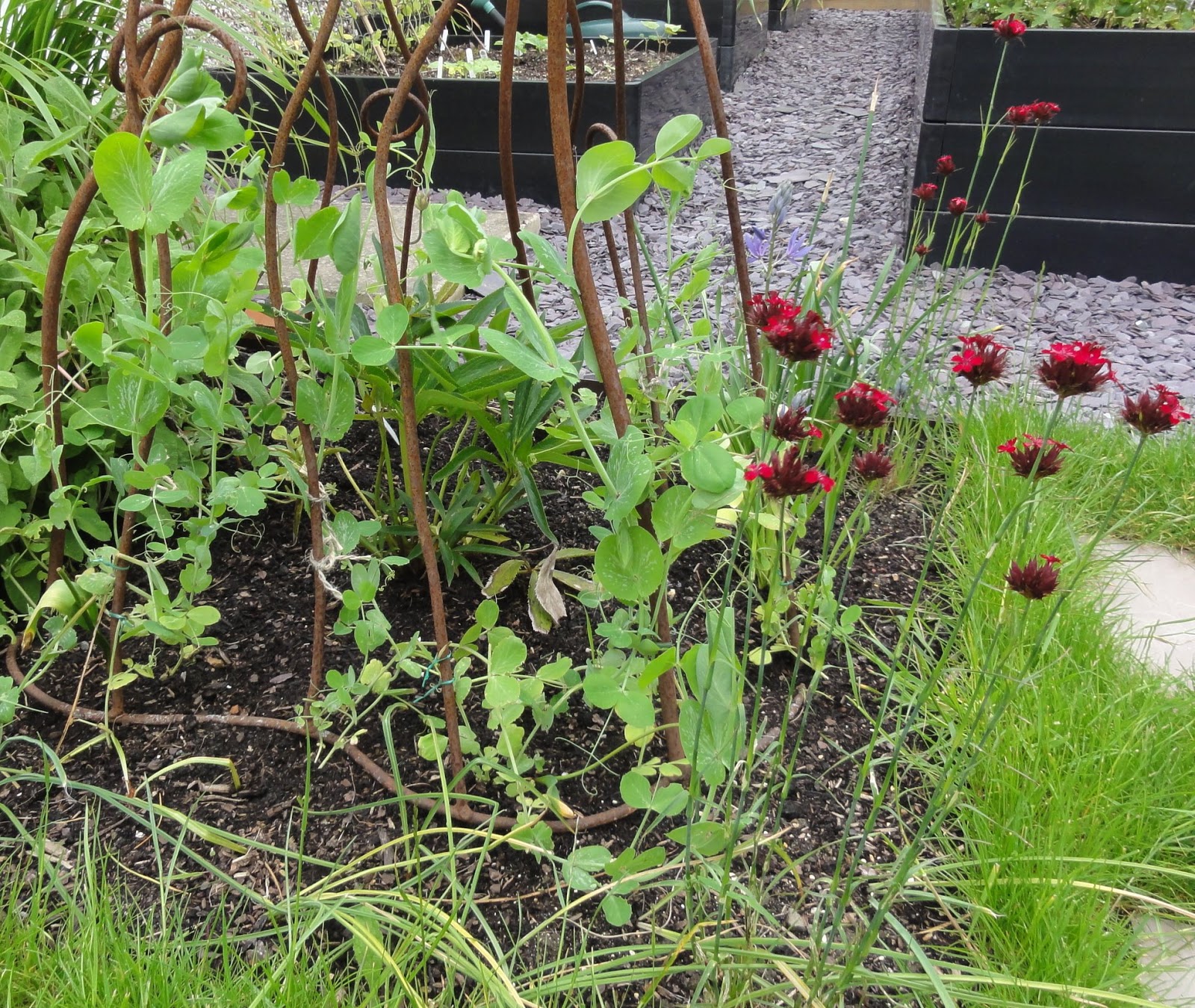 Eating peas (Lativan) growing up the obelisk, and the dianthus cruentus which I got from Sue Beesley at Bluebell Cottage Nursery is starting to flower. 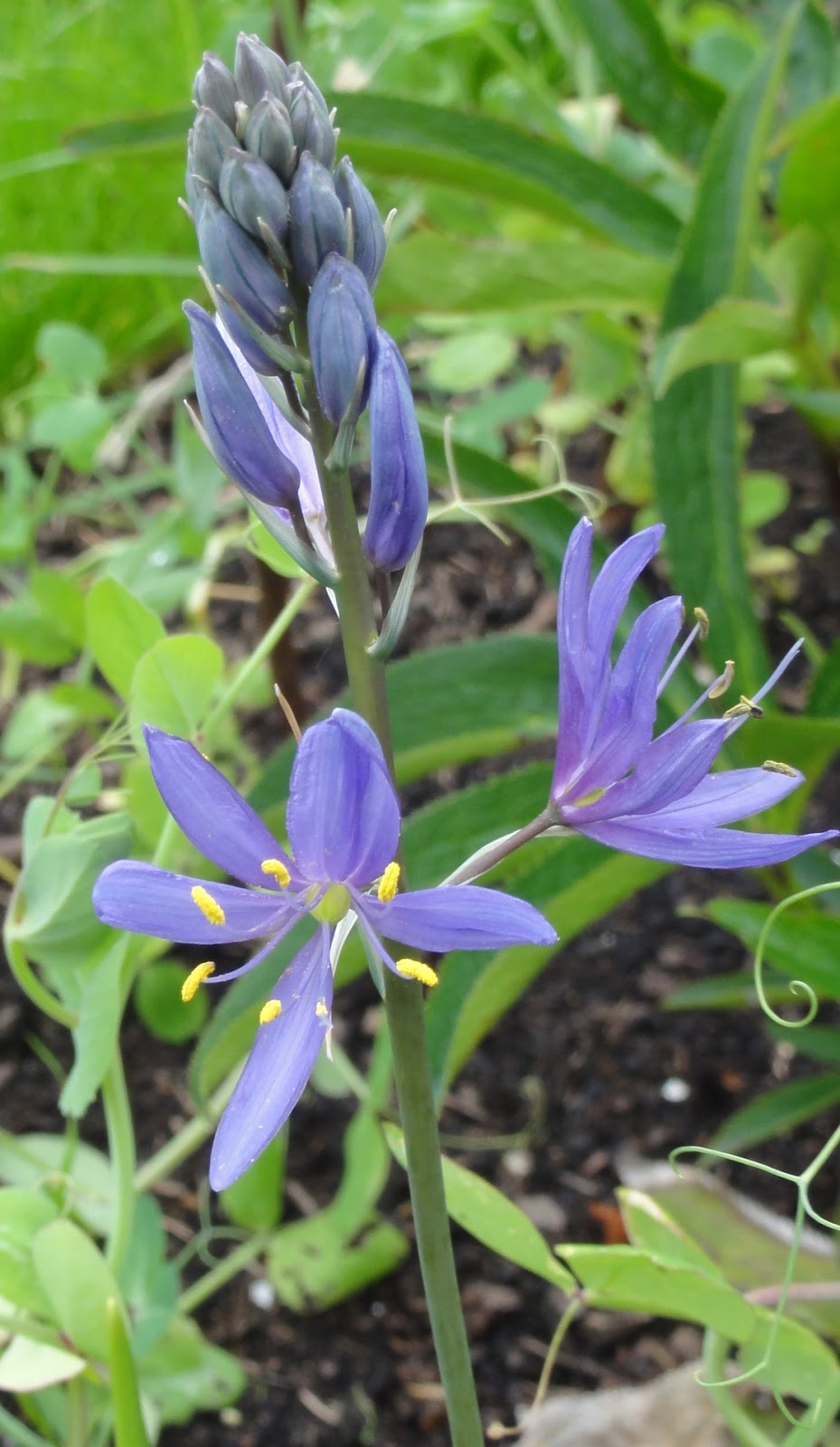 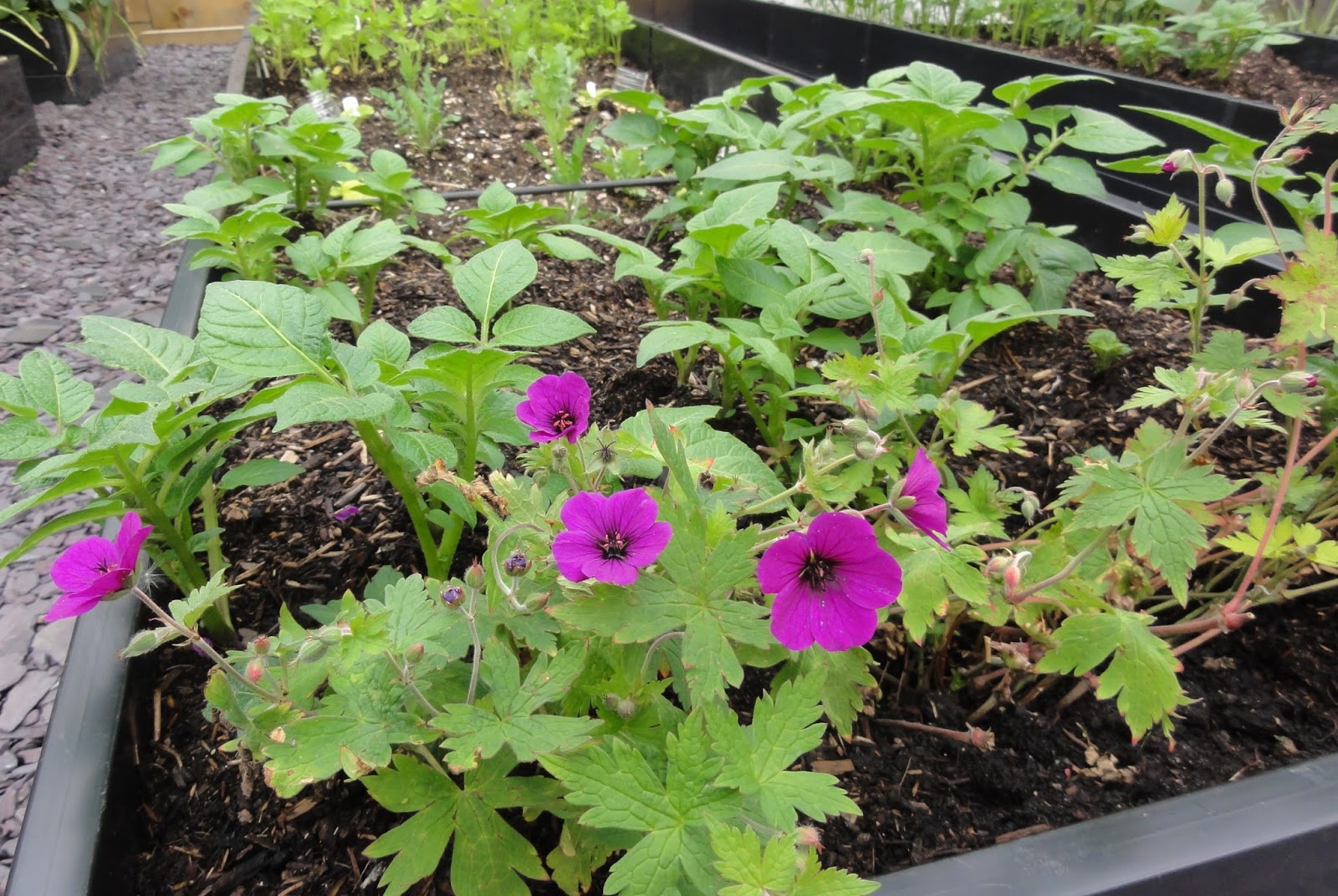 Geranium Ann Folkard (above) and Geranium x riversleaianum ‘Russell Prichard’ (recently purchased from Stillingfleet Lodge Nurseries), at the end of each of the long veg beds. They have a trailling habit so I hope they will grow down the raised bed frames to give a more attractive view. 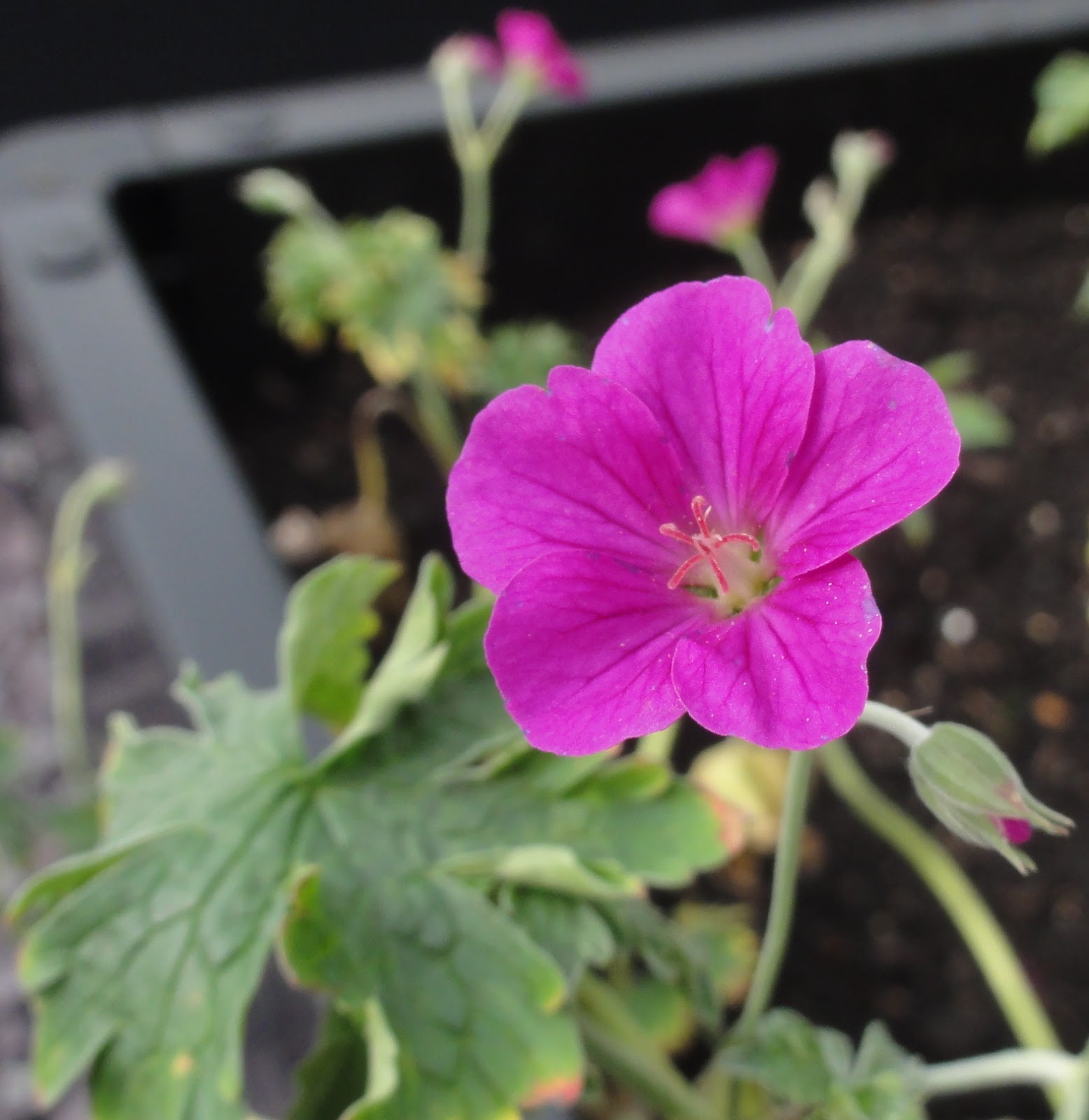 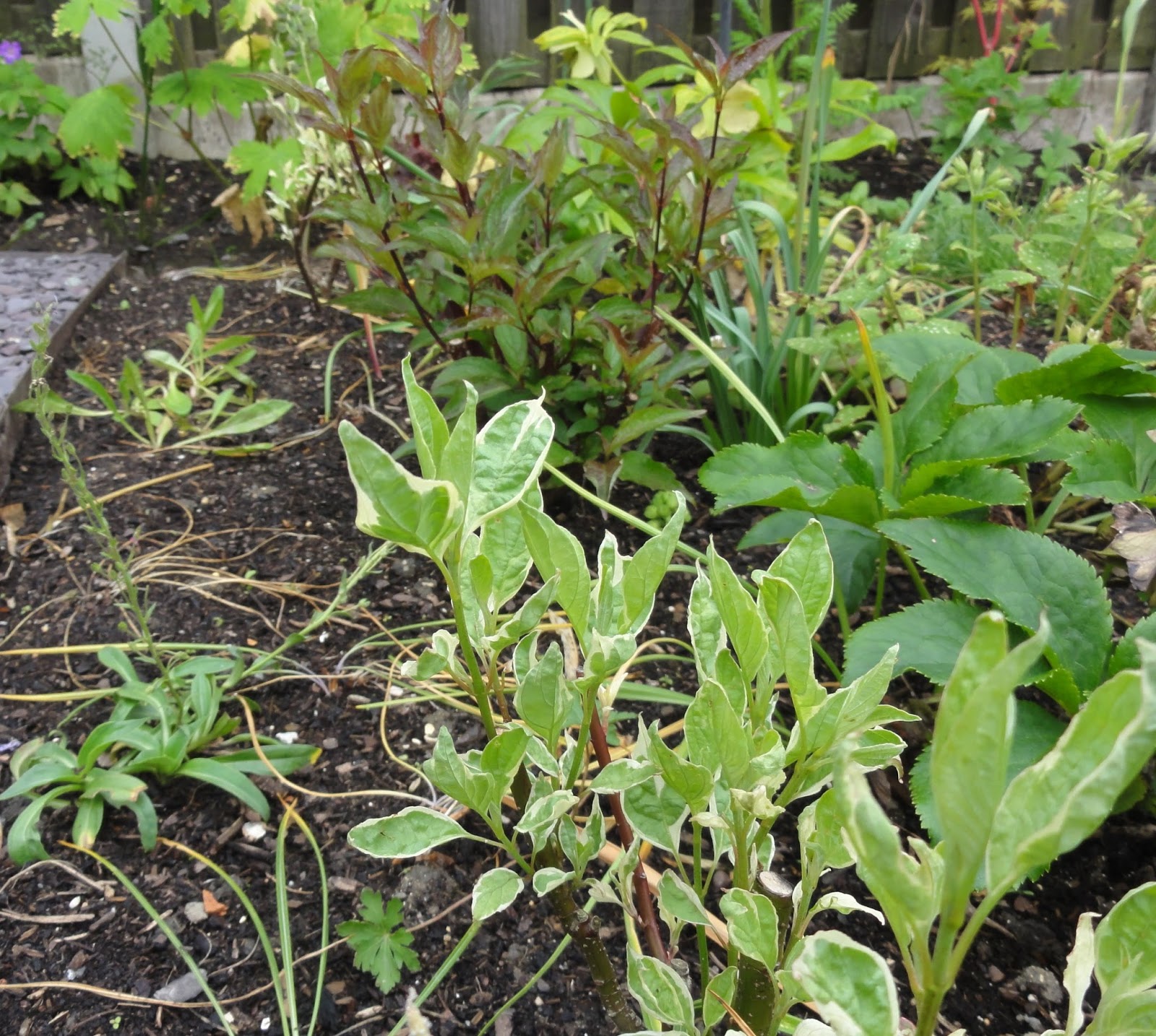 The cornus shrubs are finally taking off. I’ve added Veronica Gentianodes (above) and Cornus canadensis (below) which are lower growing and spread, to help fill out the Cornus border. 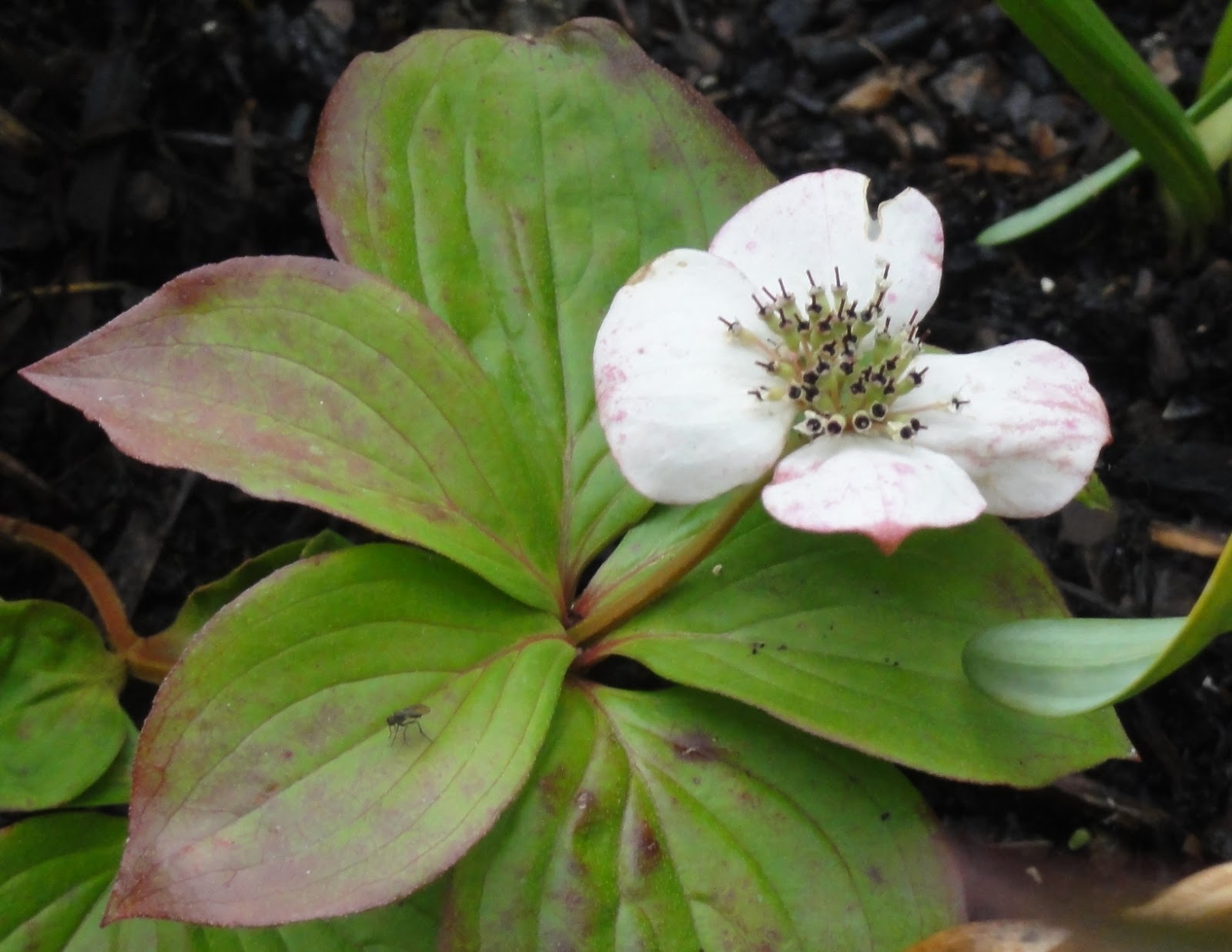 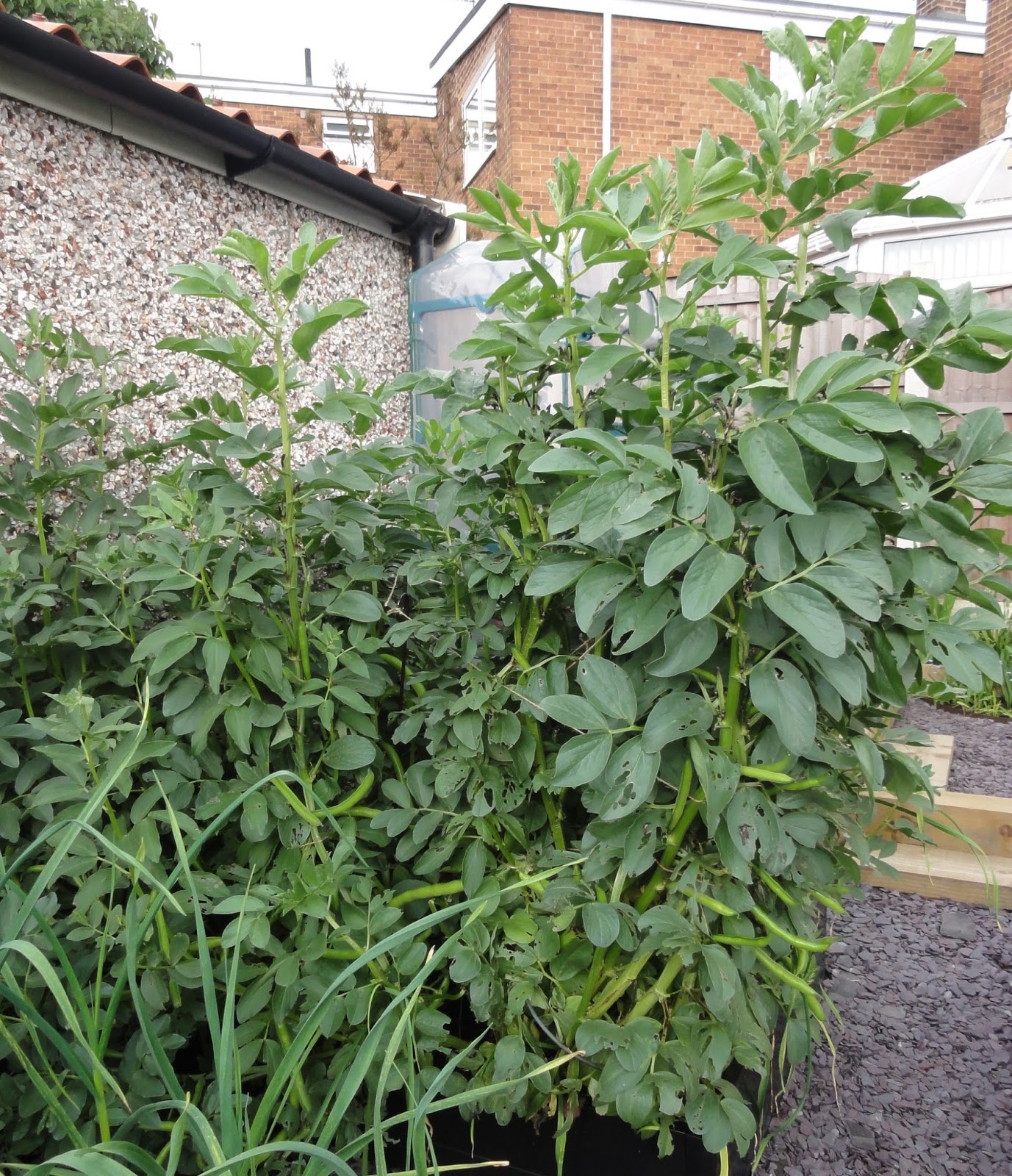 The broad beans have gone completely mad (above), but I suspect this is reducing the
growth of the garlic planted underneath, so they won’t be looking like the healthy garlic below
which isn’t competing with anything else. A learning point for next year. 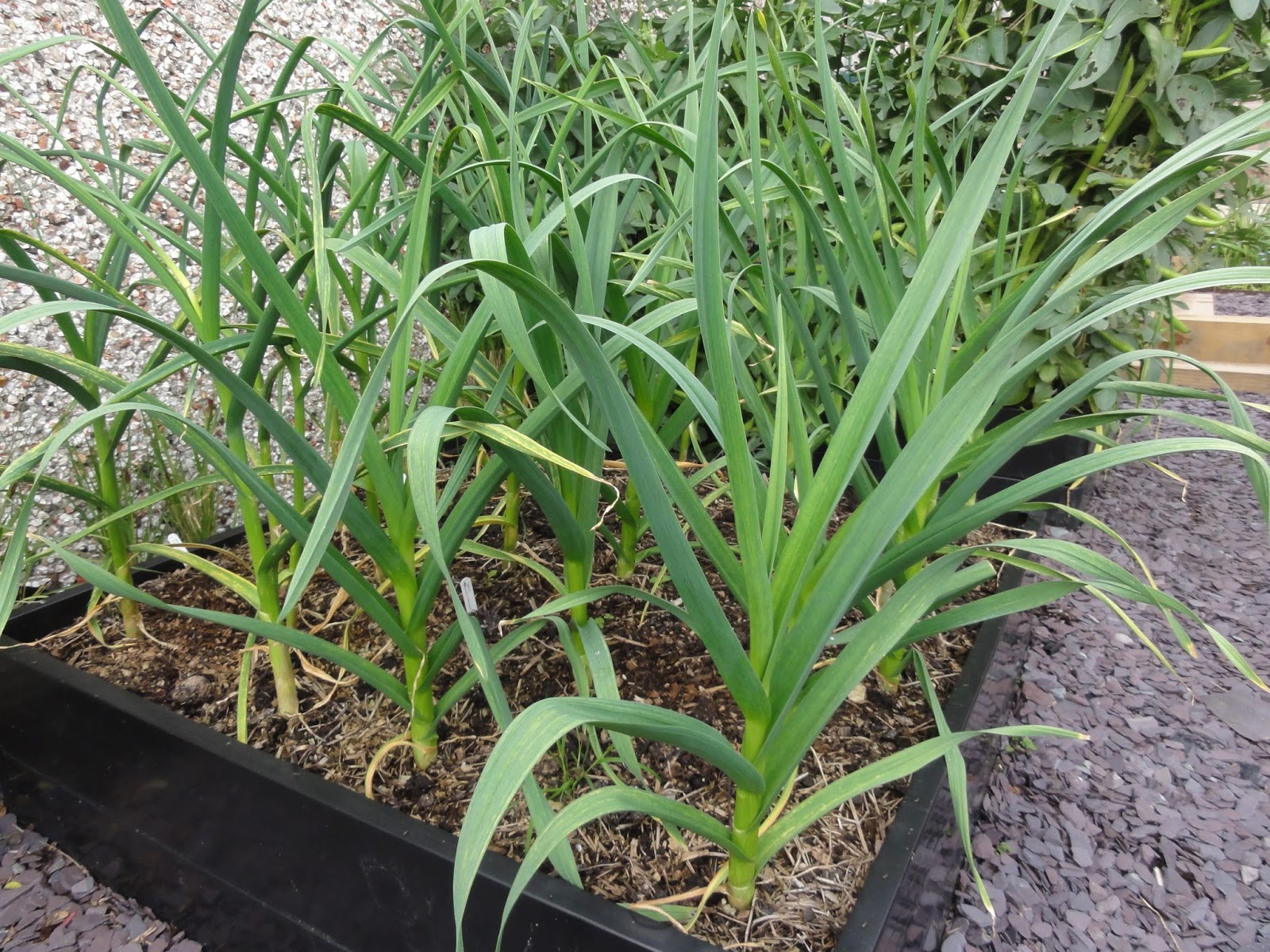 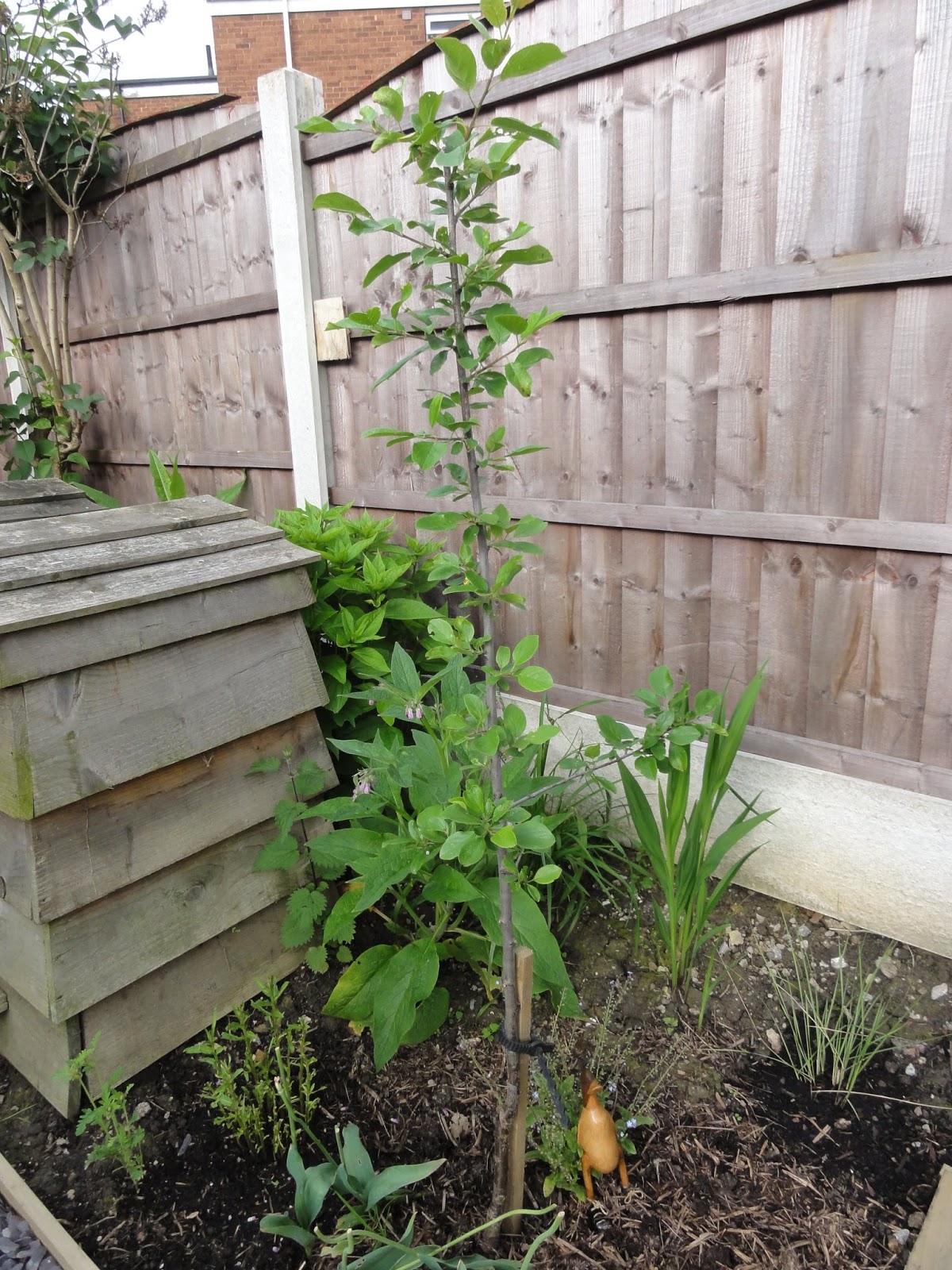 The young greengage is developing lots of growth (above)
and the comfrey (bocking 14) is now flowering. 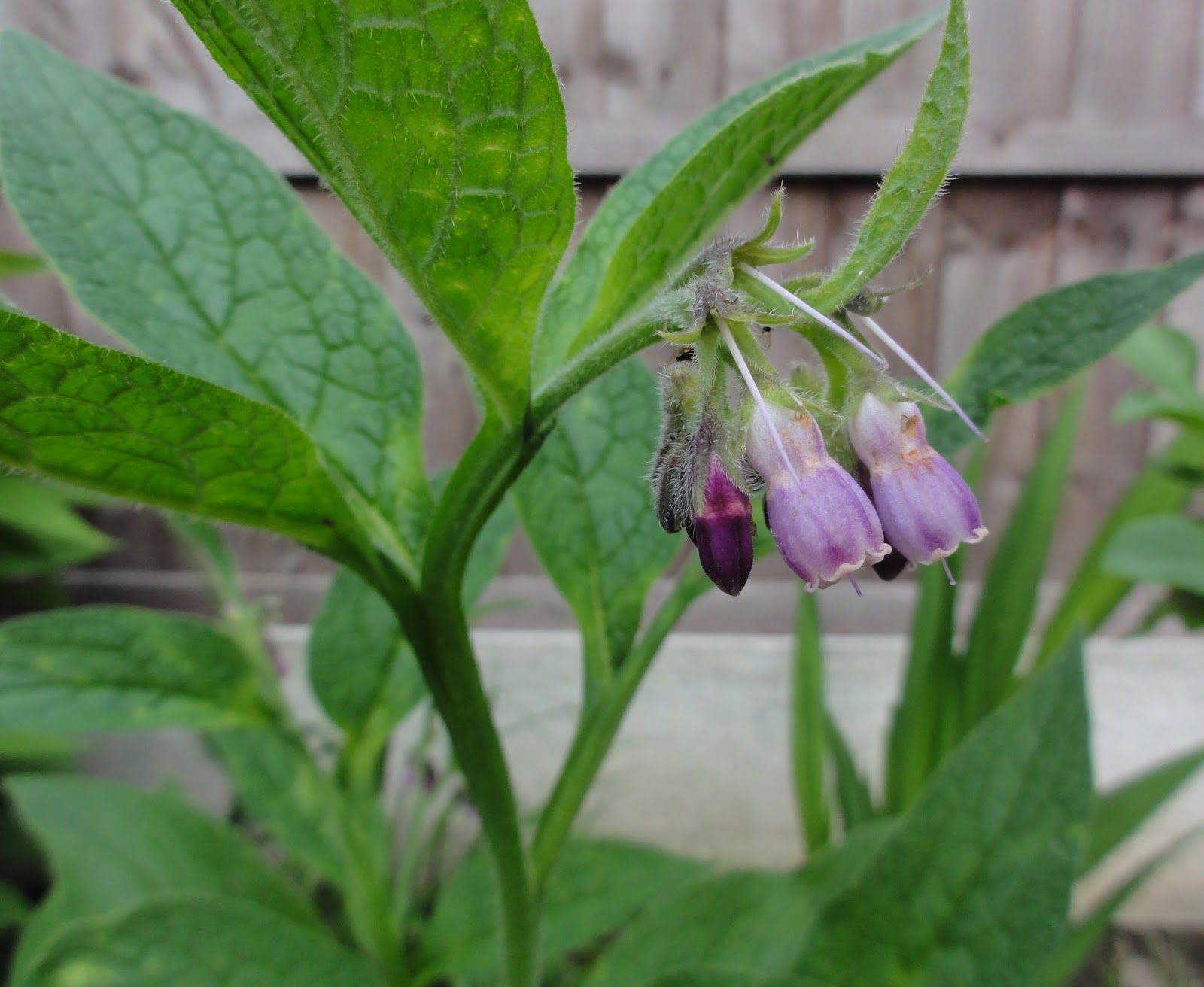 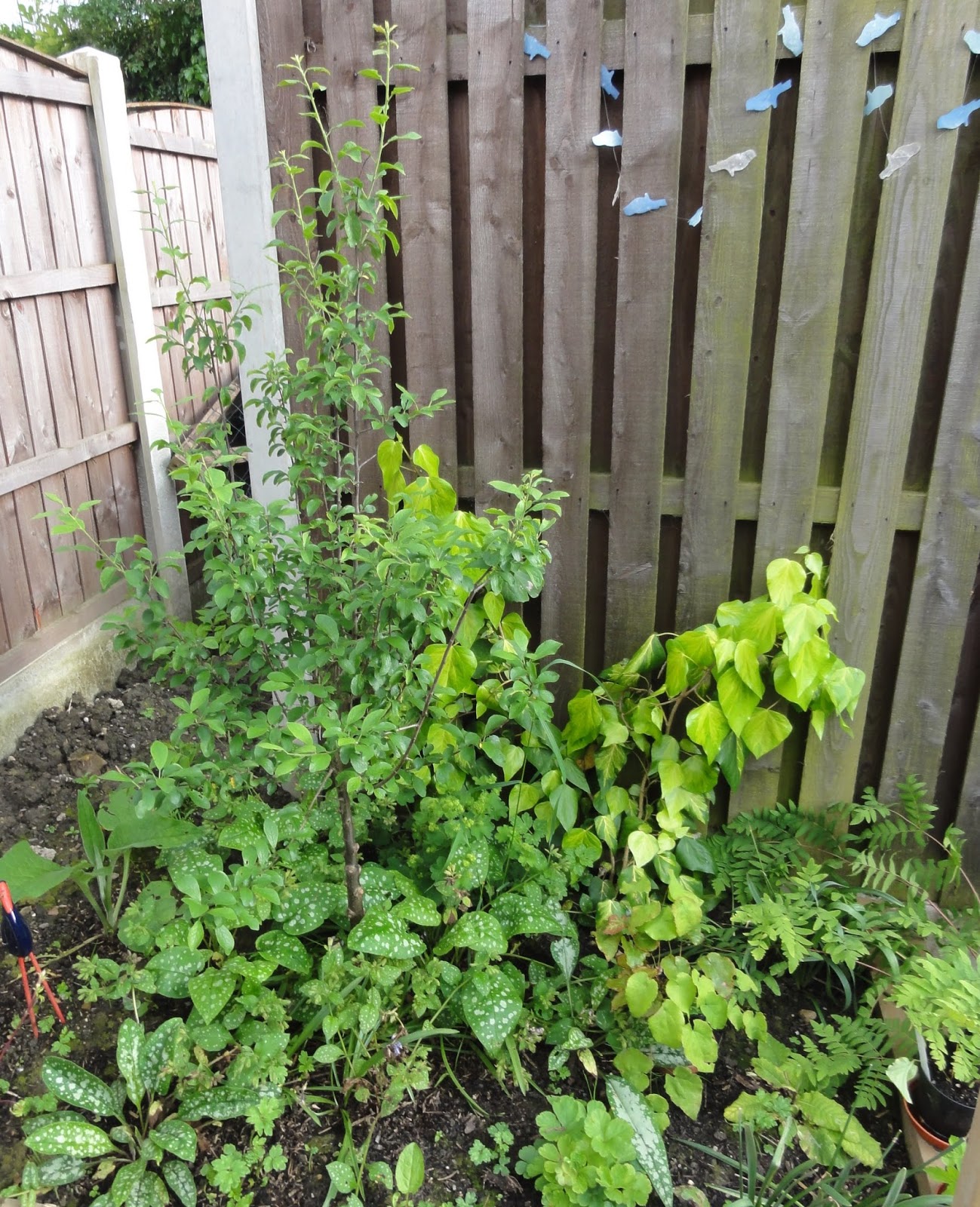 The Damson Border is very green. I need to cut back the pulmonaria
now that it has finished flowering to encourage new leaf growth.
Waterlogging
Back in January’s EOMV I mentioned that I had discovered that one part of the Shady Border suffers from waterlogging. Despite my earlier fears that the bulbs etc wouldn’t flower there, they did. However, that was when the water was only sitting there for a week or so. With recent heavy rains, the soil is so waterlogged that it’s been pretty much like this for several weeks: 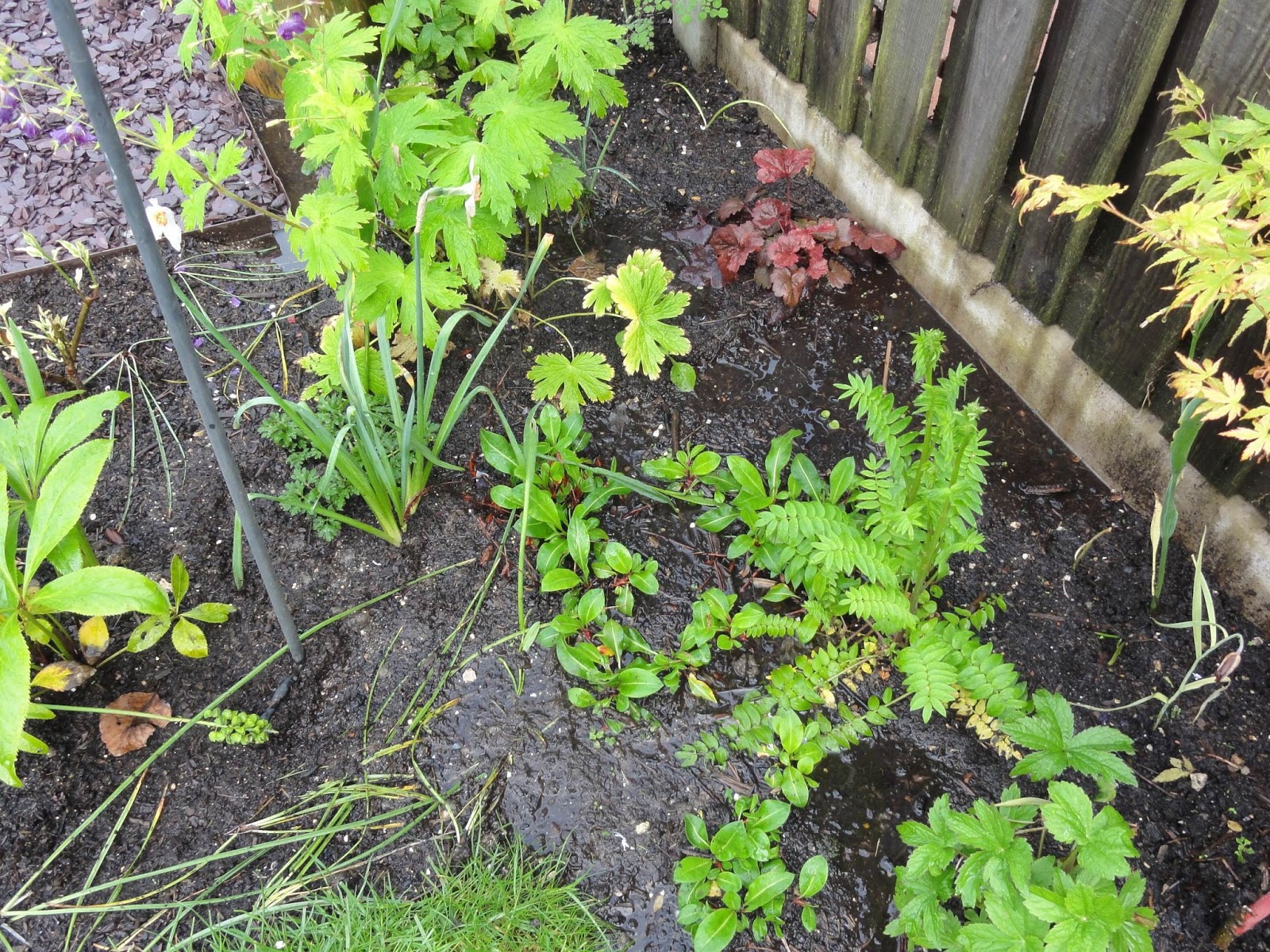 Waterlogged
The water extends further along the border than this but I found it harder to photograph. I’m not sure what to do with this section of the Shady Border. Plants that are getting waterlogged include (to name just a few): Geranium phaeum ‘lily lovell’, Polemonium caerulem, several Heuchera, Acer Palmatum ‘Sango-kaku’, Astrantias and Amsonia tabernaemontana.
Whilst they might be able to tolerate moist soil, frequent saturation is a different matter. Will the plant roots die off from excessive water? Should I take any particular plants out that don’t like to be too wet and put them in containers until I decide on a new place to plant them?  Would it be better to replace the current planting with ‘bog garden’ type plants? Or should I wait and see what happens with the plants in that section?
I’d be grateful for any advice you have. I’m currently torn between panicking and trying to be calm and see what happens.
So, finishing with what is flowering or looking good in the Long Shady Border… 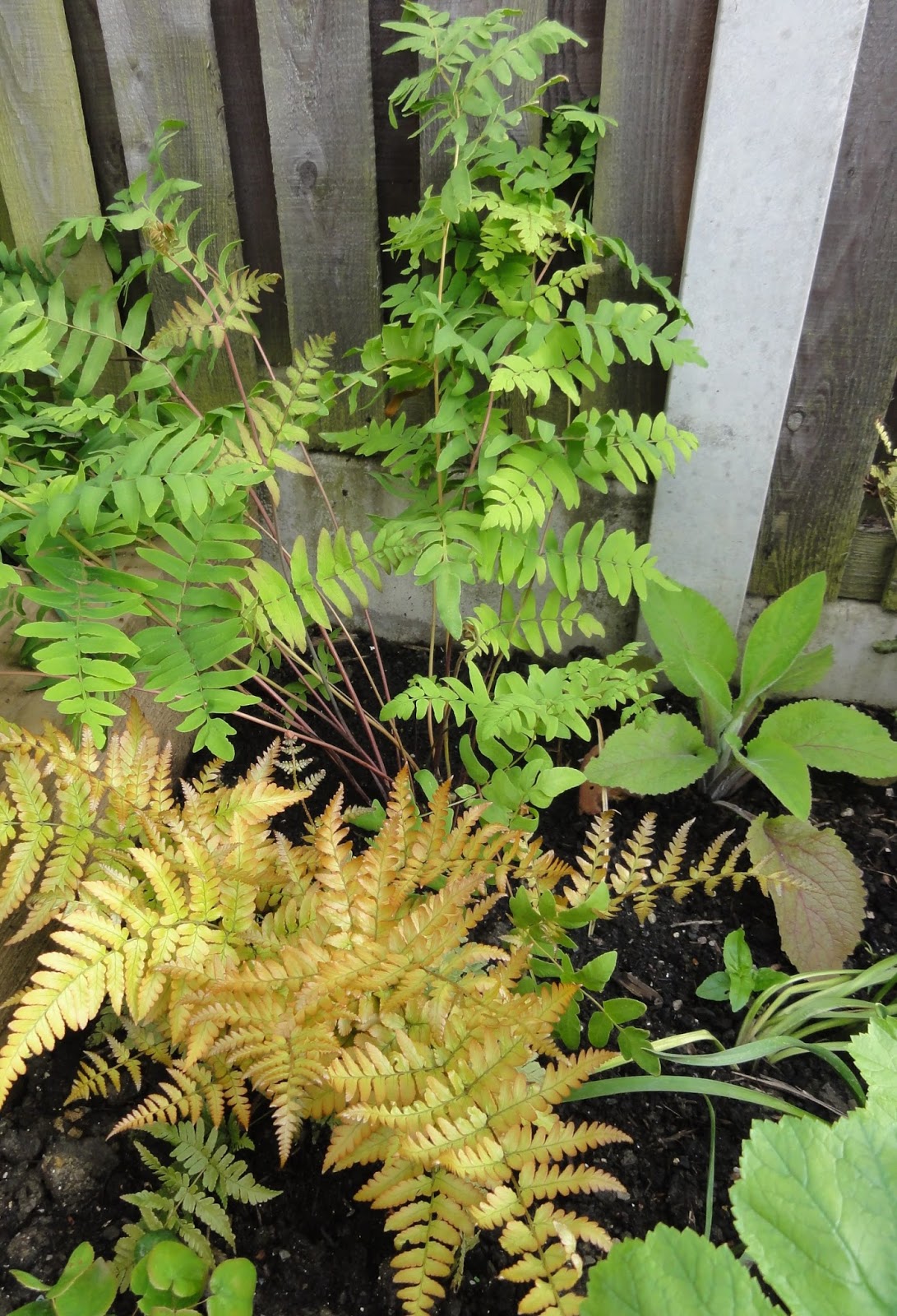 Osmunda regalis ‘Purpurascens, taller one behind and Dryopteris erythrosora to the front. 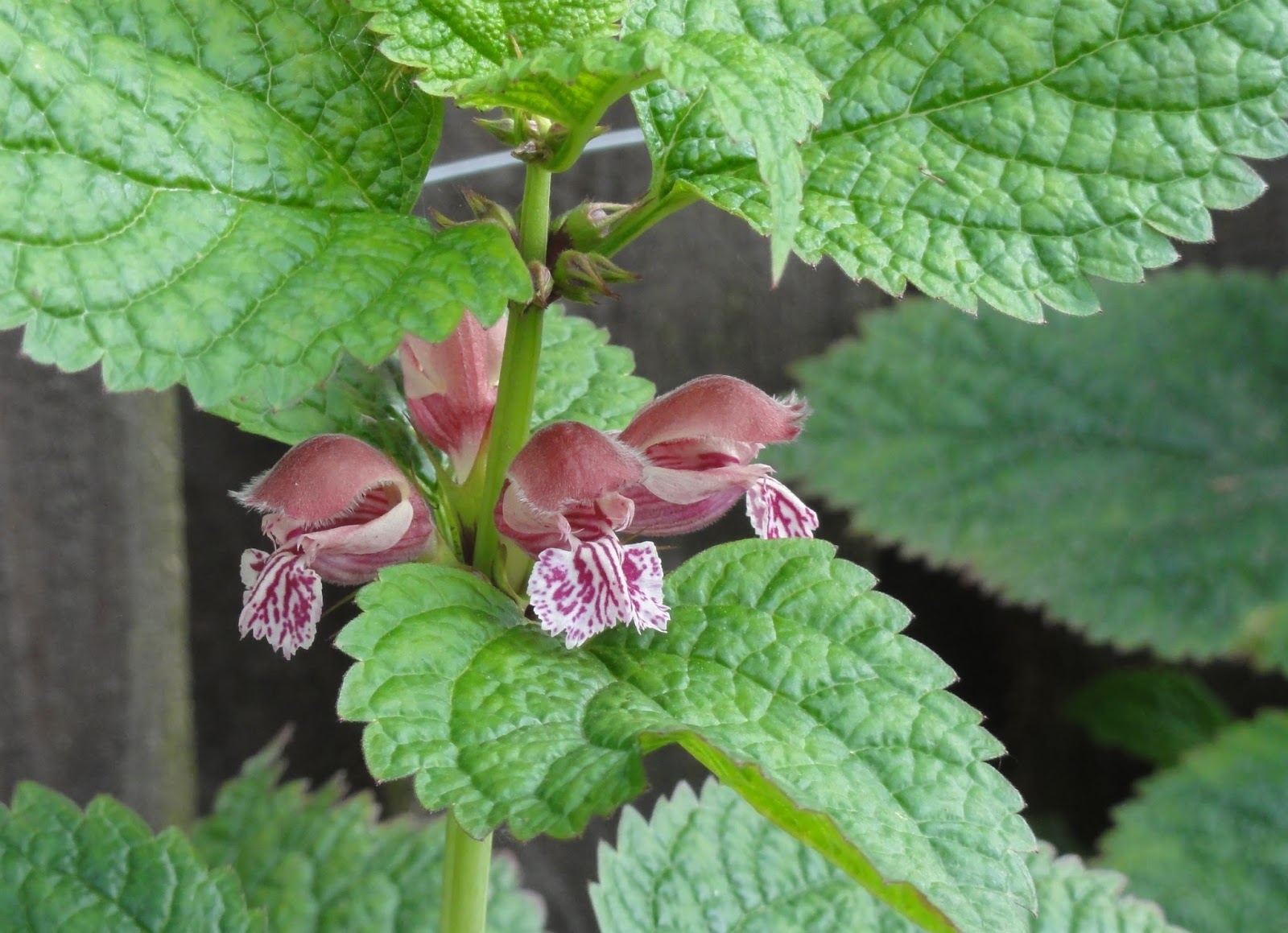 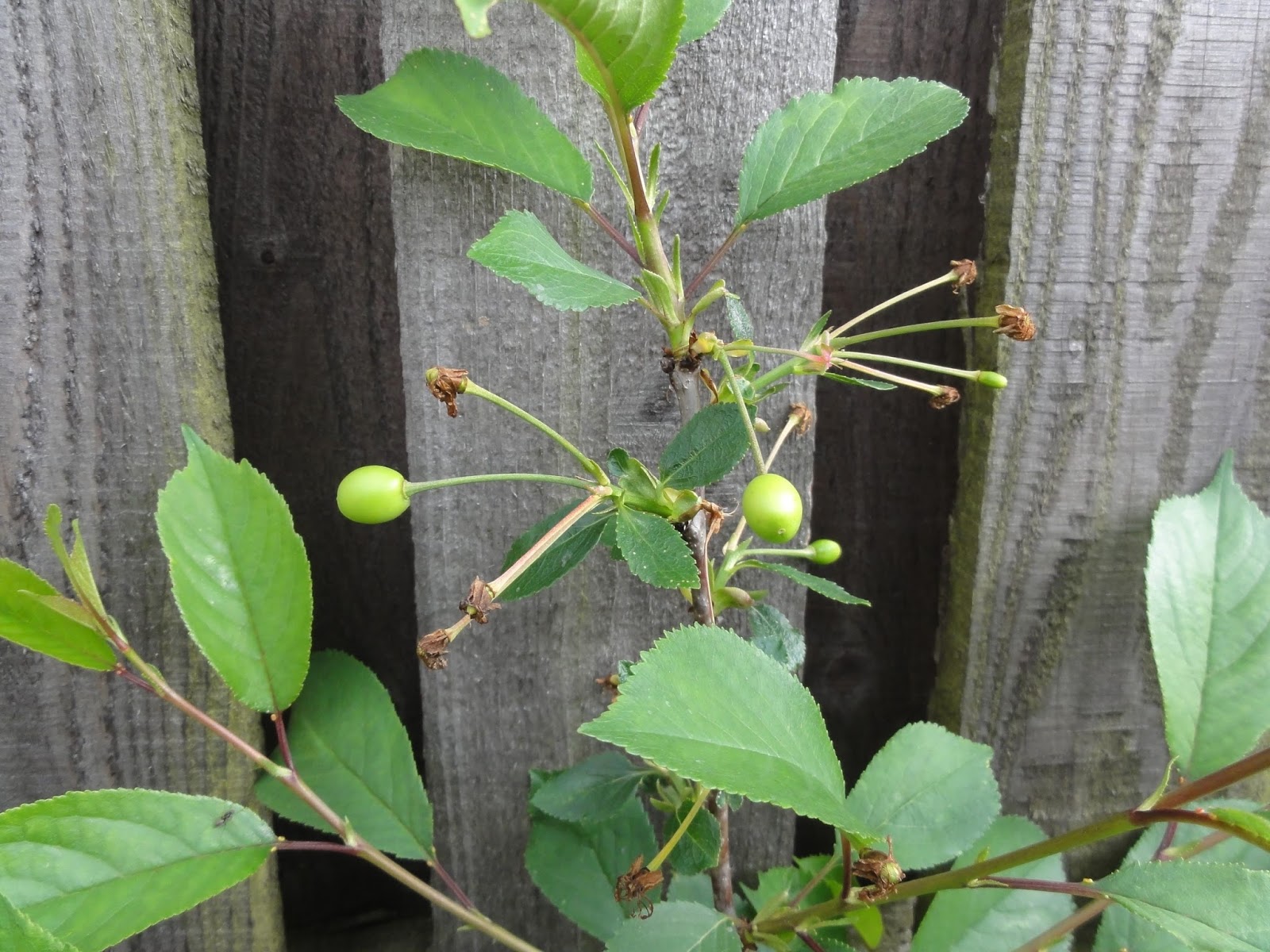 Even though I only planted it a the beginning of January, the Morello Cherry is producing some fruit! 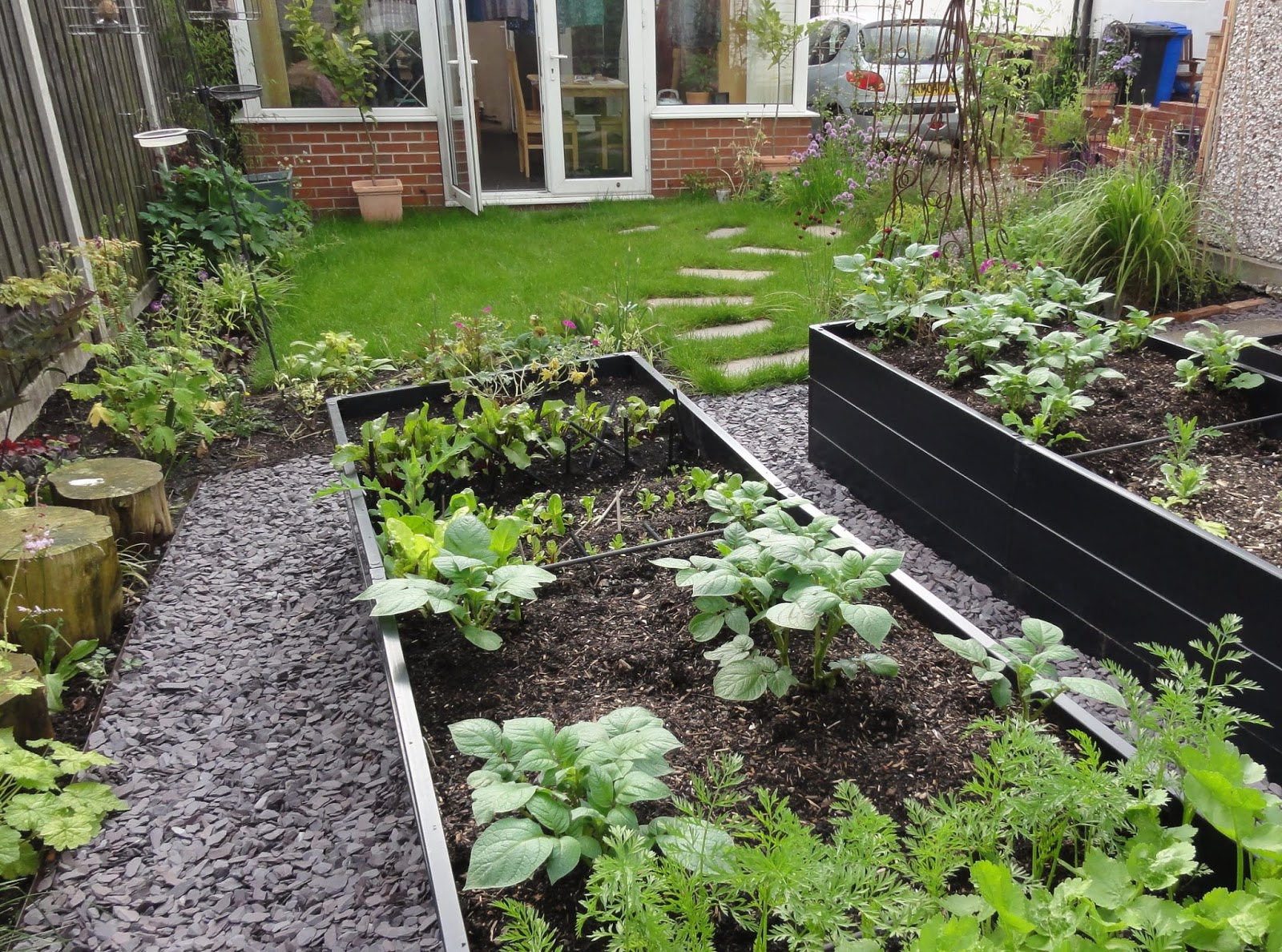 View from the back of the Shady Border looking towards the house. 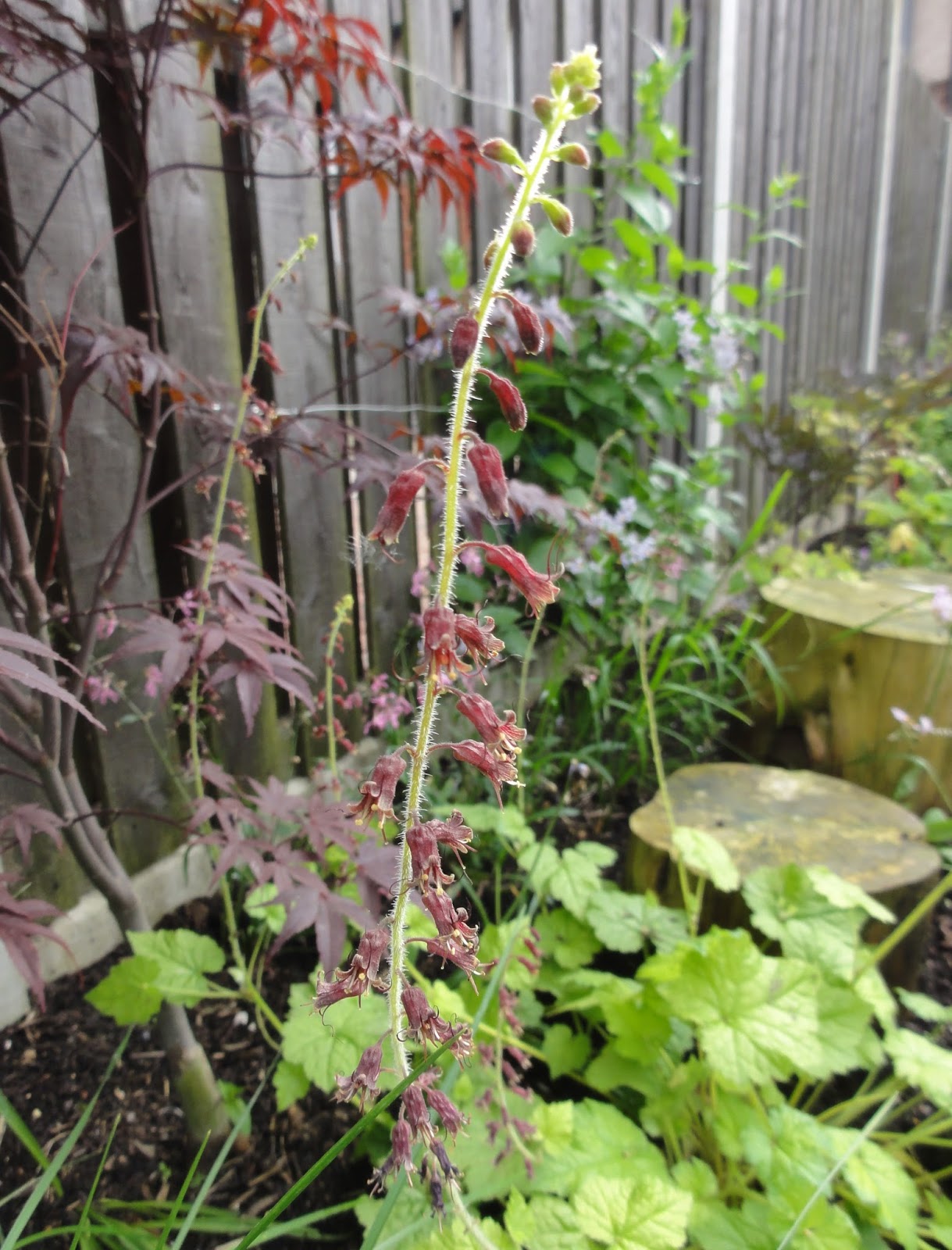 Tellima, not sure what variety. 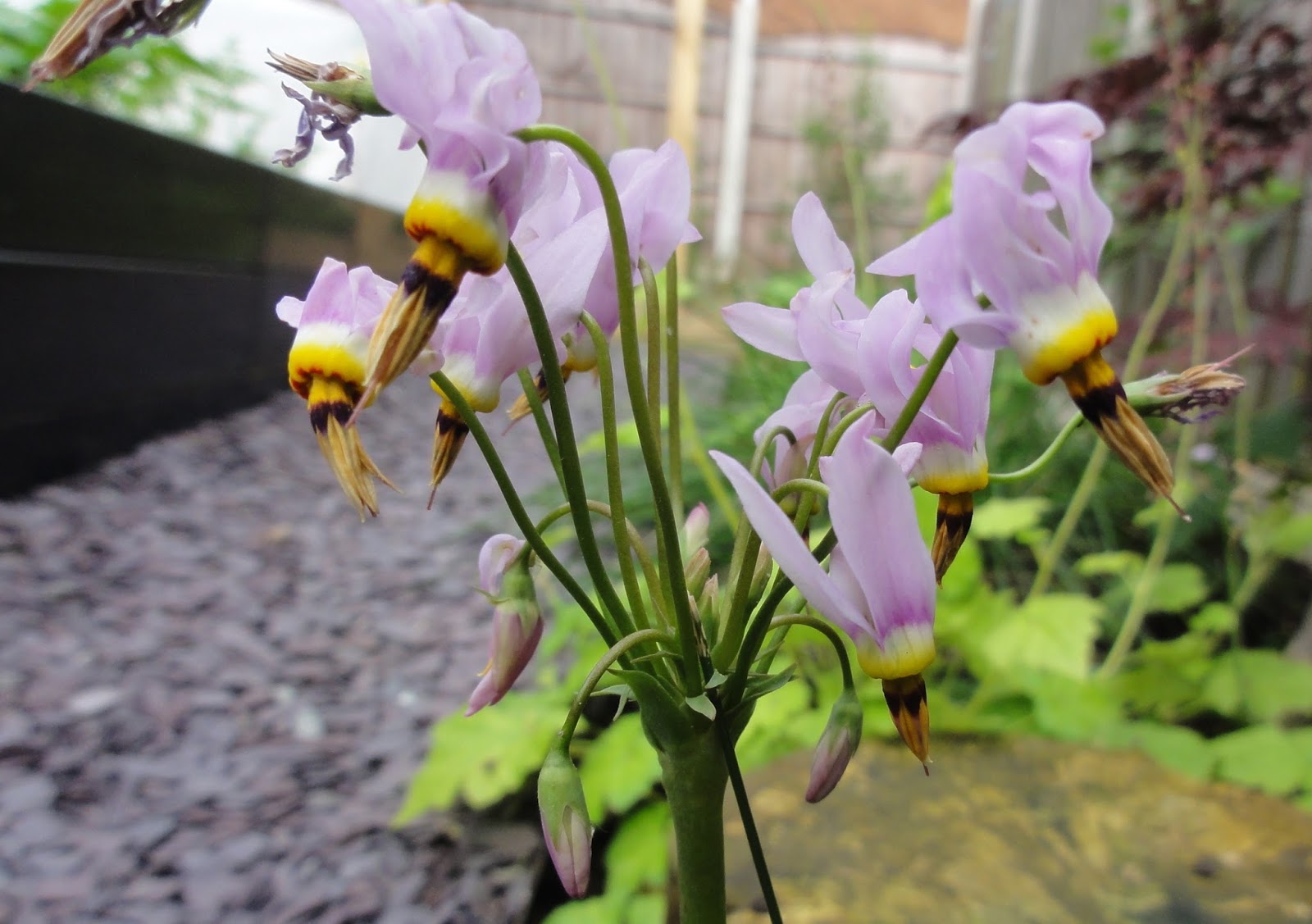 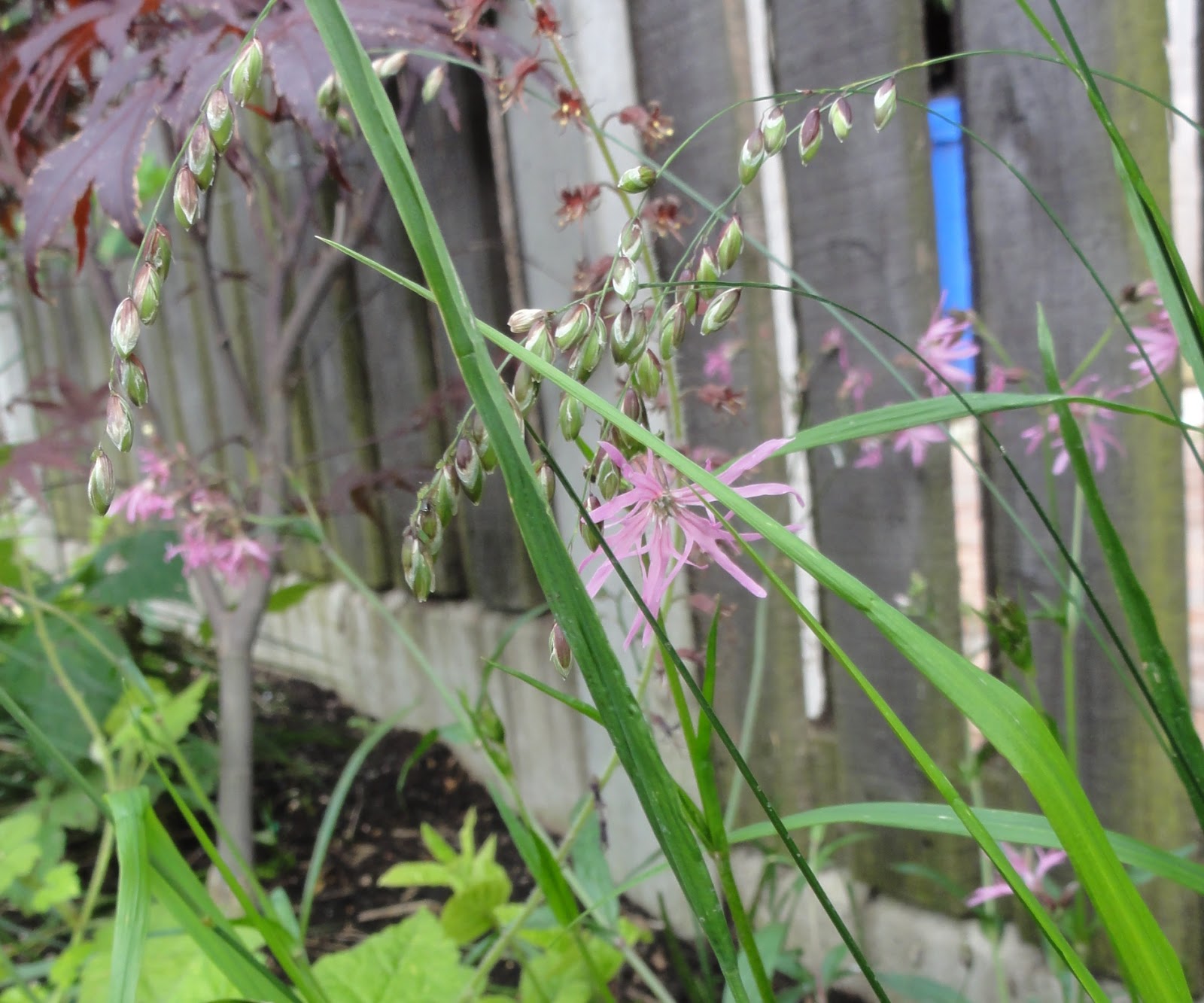 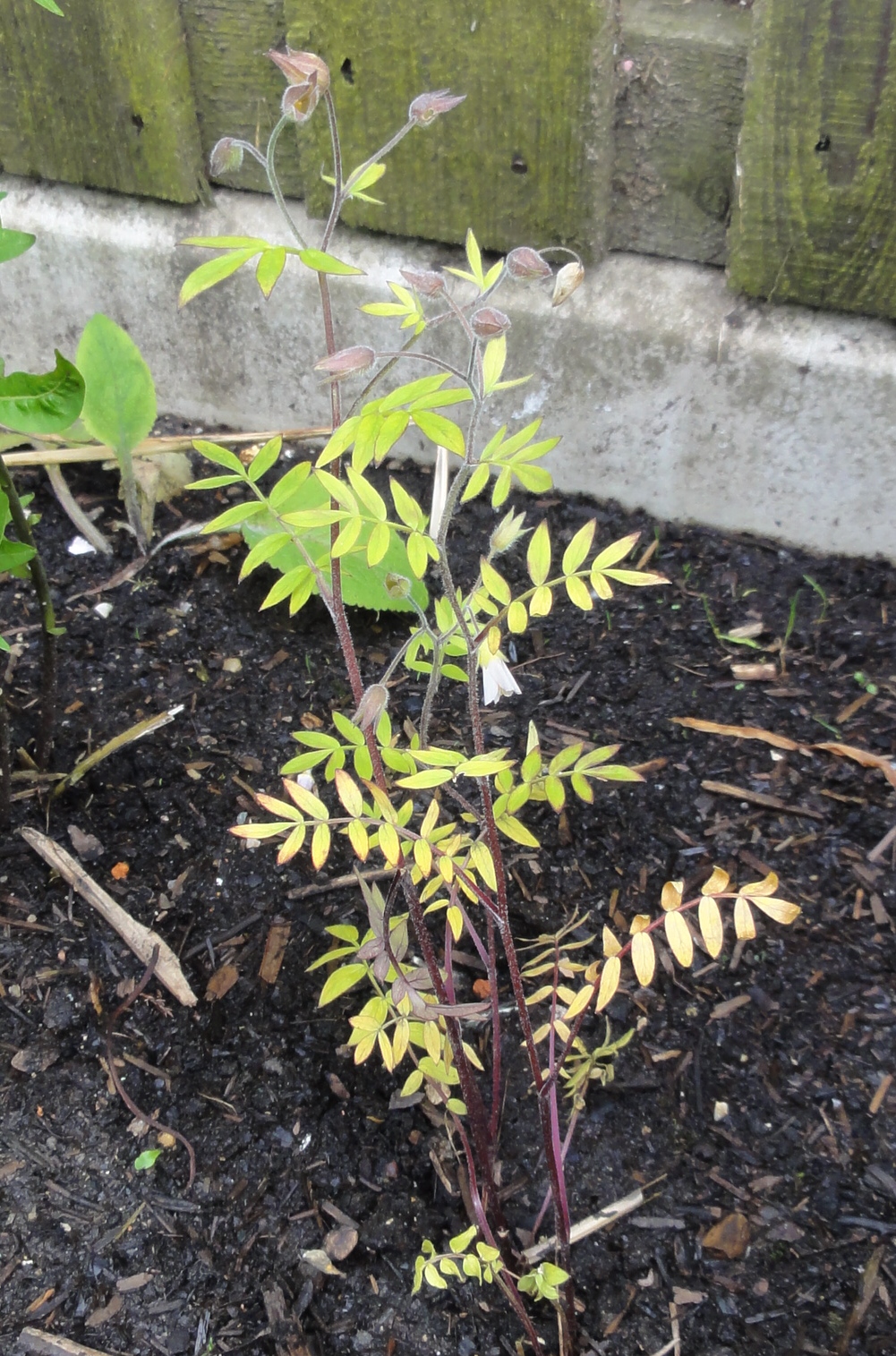 A Polemonium variety brought back from Tibet by Chris Chadwell with pinky-apricot flowers. I picked this up at the HPS plant sale and need to find out what the variety name is, if it has one.

So that’s my May 2014 EOMV. I look forward to catching up on what has been happening in the gardens of other bloggers.

UPDATE 5th June re waterlogging: I’ve spoken to the RHS and they advise that I dig up the Acer immediately as it won’t take being waterlogged and could already be dying. They think that most of the perennials should be ok though, and just want & see what happens. Thanks to the people who commented on this. If it wasn’t for your comments prompting me, I may have left the Acer in the ground. Thanks!

* * * * *
End of month view is hosted by Helen Johnstone, aka @patientgardener. Visit Helen’s blog for her May 2014 EOMV and links to other bloggers EOMV posts.