It’s been a bit quiet on the gardening front here at Gwenfar’s Lottie in the last couple of months. Apart from several weeks in Australia and Singapore (which I’ll start blogging about soon), I’ve mainly been focussing my energies elsewhere. That’s because – we are moving – to Sheffield! I’m going to be a Yorkshire Woman!

This of course means moving gardens and lotties. If you are particularly interested in why we chose to move to Sheffield, you can read my separate blog on how we reached this choice. From a growing perspective, what does this mean?

Well, for starters, it’s why I’m not (sob…) going to the annual Garden Organic Potato Day at Ryton next Saturday. This is usually one of my favourite days of the year, what my friend Manishta calls ‘Gwenfar’s Xmas’. Sadly it has to be cancelled this year as we shall be moving in mid-March, and with there being so much upheavel, I’m not sure where potato planting will quite fit in.

It’s also why I haven’t done any seed ordering, even from my beloved Heritage Seed Library catalogue. This is because until recently, we weren’t sure where in Sheffield we were moving, so didn’t think it made sense to order a bunch of seeds of the basis of having no idea what my new garden will be like. We have now had an offer accepted on a property. As you all know how up and down buying and selling can be, I’m not saying where it is yet, other than ‘Heeley area of Sheffield’, because we don’t want to jinx the purchase! Hopefully all will go well and I will be moving into a smaller garden that will be East-West facing. This will be new territory for me, both direction (my last two gardens have been predominantly North-facing), and because the size will be reduced.

I’ve also decided, for now, not to get another allotment. Regular readers will know that I’ve been struggling to keep on top on my lottie this year, and back in August was joined by Manishta, then later Will and Ilana on the plot. This was for a mix of reasons, including back problems and time. So I’ve decided when moving, that for now I’ll focus on developing my new garden. Gwenfar’s Lottie will become Gwenfar’s Garden.

I’m so glad that I recently had Manishta, Will and Ilana on the plot, as at least I can leave knowing that it will be taken on by people keen to grow and not just left to become brambles. I’m planning on still working on the lottie before I move, helping everyone prepare for the 2013 growing season. I also won’t entirely disappear, as I’ll be back for the garlic harvest in July! After spending the last few years growing on some unusual varieties I want to be able to continue doing so. So those of you taking part in the garlic growing experiement, don’t worry, that continues as is and I’ll still be compiling our results and publishing them later in the year.

I am now starting the get ready to say goodbye to my home garden too. Moving garden is a big deal, as any gardener will tell you. All those plants and work you have put years into, and much of it to be left behind. I am taking some key plants, ones I either have a special attachment too (the Acer Grisium and Rosa Seagull) or which are harder to find and I don’t want to leave them behind.

The person buying our house particularly liked the garden, so I cannot dig up everything! In a way, just taking a limited number of plants with me is a good thing. New garden, new conditions, and a chance to try new things.

Over the next few weeks I’ll do some final blogs about my Oxford garden and lottie. And I’ll still order some seeds from HSL. It goes against my deep gardening instinct not to order seeds at this time of year… 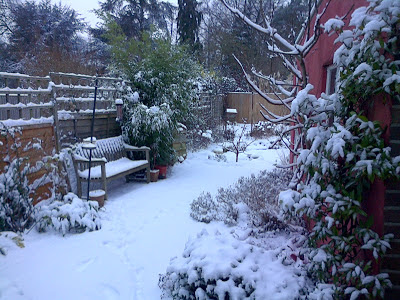 3 thoughts on “Moving garden, OR I’m going to be a Yorkshire Woman!”