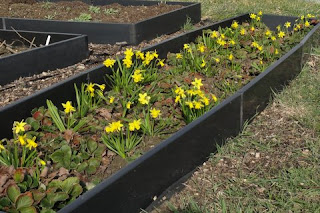 Narcissi amongst the strawberries

I’m a bit behind with the sowing of seeds both in pots and down at the lottie. Today I managed to catch up a bit on both.

I have found that I have no luck sowing broad beans direct to soil at the lottie. Most of them get eaten before they have a chance to send up the first leaves, and those that do get destroyed either by slugs or by the mice eating the rest of the seed anyway.

So I’ve sown lots and lots of broad beans in pots today, including Martock and Red Bristow, which I got from the Heritage Seed Library, along with oldies but goodies Aquadulce Claudia, Express, Witkiem and Bunyards Exhibition. I’ll let them get to a decent size before I take them down to the plot to plant. I also sowed in pots tomatoes, aubergines, various brassicas and calabrese, and some Echinacea purpurea. 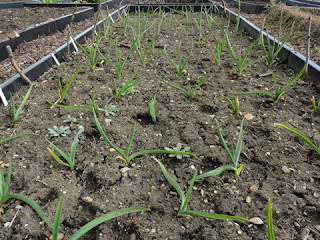 Down at the lottie itself I found my garlic coming along nicely. I got to work preparing a couple of beds for sowing. I pulled up the last of the parsnips, so we will be having roast parsnips in the next day or so! Also collected the last of the Brussels Sprouts and pulled the remains up. Then, because I’m behind and didn’t do this in February, I sowed my first parsnips for this year. I also sowed my first rows of golden and rainbow chard and a row of perpetual spinach. 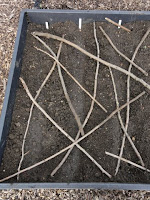 Ok, what’s going on here you ask? This is the three rows of chard and spinach I sowed, then with some sticks on top to help protect them. Protect them from what? Well, not complete sure, but at least foxes, and probably cats and other creatures. I’ve found in the past that once I’ve nicely weeded a bed then sown new seedlings, I can come back a few days later to find it half dug over and tell-tale footprints around the rows.

To combat this problem, I’ve found that if I put down some sticks over the rows, including some sticking out, that seems to deter the creatures and allow my seedlings to grow. Once they are an inch or so high, I can remove the sticks as they don’t appear to get disturbed once they get to this point. It’s odd I know, but it seems to work and we get our food, so that’s what matters, right?! 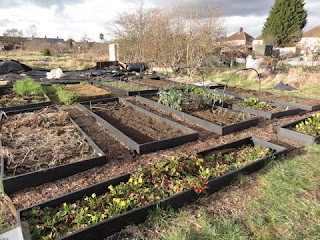 Overall, I felt I managed to catch up a little and feeling pretty pleased with how the plot is looking. I’ve decided to try to not to worry if I think I’m ‘late’ with getting my seedlings going. After all, this is meant to be fun and relaxing, as well as a way of growing my own food.

2 thoughts on “Busy spring sowing begins, and how to protect fresh sowings”