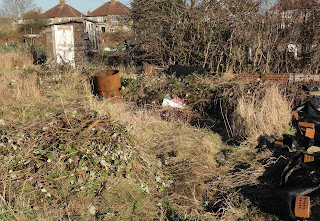 After three years work, Kevin and I have finally cut down the worst of the brambles and the 2nd half of the lottie, not yet in cultivation, is now covered in black plastic.

This feels like quite an achievement, though one might wonder why in the hell I would celebrate putting down black plastic? It simply means that after a lot of very hard work, aching backs and scratched arms and pricked fingers, the brambles are seriously becoming EX-brambles* and the land has been reclaimed for growing.

In the space of the afternoon, the last quarter of the lottie went from being covered with brambles to being covered with black plastic. Thanks to some help from our friend Manishta a few weeks ago, we had already started cutting down the brambles in this section. You can see the pile of cuttings to the left. 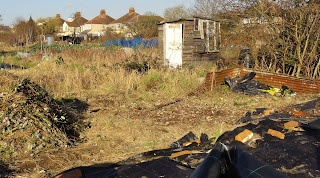 After a couple of hours work, much tea and pastries, the clearing was done. 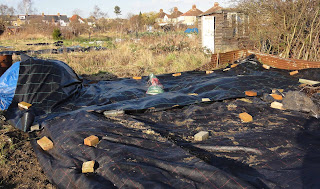 Then came the black plastic. Never has black plastic been such a welcome sight. The big bulge (ooooh, that sounds rude) is the large pile of brambles that we are drying out so we can have a bonfire with them. 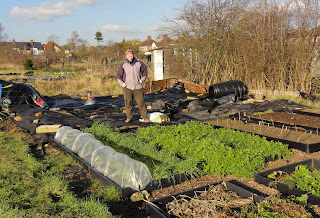 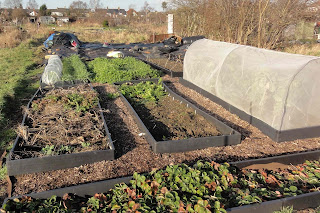 The first half is well into cultivation. In the third quarter of the plot we have started building raised beds and these will have the potatoes growing in them this year.  And the last quarter that we just covered? Well, we obviously still have to dig out the bramble and weed roots. But this will be where the shed, compost bins, and eventually (oh, dreams), the polytunnel will go. Oh, and a small area for an outdoor fire pit so we can cook some food we just dug up on the lottie.

In the meantime, the dream of finally putting up a shed is finally much closer. By the end of Spring, a shed I shall have. Black plastic – I love you!

*no ex-parrots were harmed in the creation of this lottie.

2 thoughts on “The achievement of black plastic”