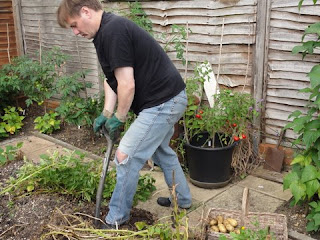 So here are the first five types of potatoes we dug up. When it comes to yields, for small potatoes I add them up, then divide by 2. For expected yields, I use the Alan Roman’s potato guide.

Foremost. 1st early, for baking, boiling, mashing and salads. First time I’ve grown this potato. I planted 3 seed potatoes and the result was 4 extra large, 10 large, 5 medium. I was expecting a yield of about 15 and got 19. 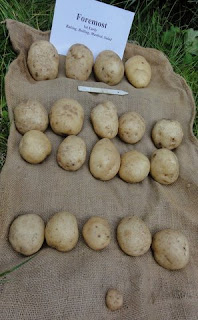 Lord Rosebery. 1st early, for baking, boiling and mashing. Again another one I am trying for the first time. I planted 8 and we dug up 4 large, 15 medium and 12 small. Yield expected was 40, but only got 24. A few of the taties did have a bit of scab on them, though as it was the first time taties were growing in the soil for some years (if ever), this can happen. 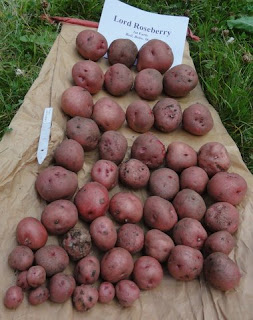 Red Duke of York. 1st early, for roasting, chips, baking and boiling. This is one of my favourite taties. It’s a great baker/roaster and yields are usually good. This year the yield was down slightly, but could have been because I did squeeze in 6 seeds potatoes into a small space. We dug up 1 large, 22 medium and 10 small, so a total of 33 (expected 30). In 2010 I planted 5 seed potatoes and ended up with a yield of 42, so yes, definitely down on previous years. However, i’ll forgive it as 1. it was probably my fault and 2, it’s such a good baker!

Anya. 2nd early, boiling and salad potatoes. Another new one for me. Only planted 3 seed taties and expected no more than 10, but got 35, 5 large, 18 medium and 12 small. So great yields – looking forward to seeing how they taste. 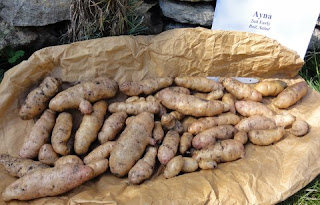 Charlotte. 2nd early, salad potato, but also can be roasted, baked, boiled and mashed. This is the classic salad potato and I do rather like them, hot with a bit of butter. Yum. Planted 5 and expected about 25-30 though , got 39. These were 7 large, 26 medium and 6 small. 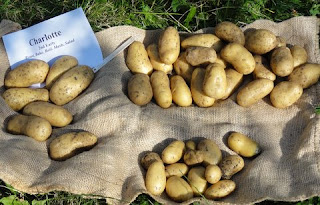 The late planting doesn’t seem to have effected the yields and I am pretty pleased so far. Will dig up the rest of the 2nd earlies soon, they are down at the lottie. Will leave the maincrop and late maincrops until September, maybe even October – they were planted late May…

So the potato recipes start now. Tonight it was a potato and tomato bake (yes, with my own tomatoes too – will write about them later). 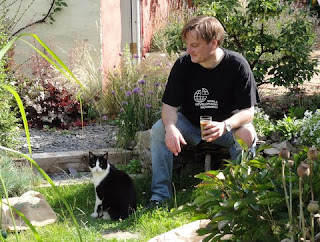 Kevin having a well-deserved beer after all that digging. 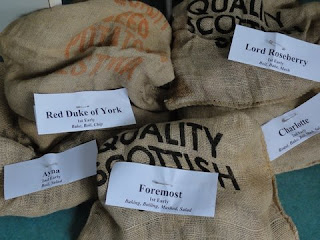