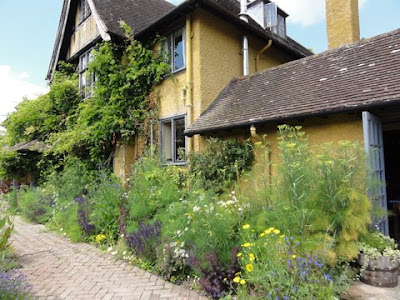 For some time I’ve wanted to visit Bryan’s Ground. I’ve read about it in gardening magazines like Gardens Illustrated and RHS’s The Garden. And I’ve read other gardening bloggers experiences of visiting, such as VP’s back in May, where she got to see the irises in the orchard in bloom. I admit to being envious! It also happens to be in my favourite part of the UK, the Herefordshire-Welsh border. So when Kevin’s cousin Nigel, and his partner Andy, two keen gardeners themselves, heading over for a visit from Melbourne suggested we meet at a garden, say, Bryan’s Ground – it seemed like the moment had arrived. 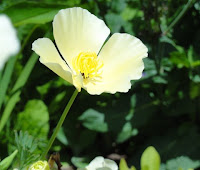 I always get a bit nervous when arriving at a garden I’ve heard so much about. There is often the great chance that it won’t live up to expectations. I need not have worried, Bryan’s Ground is beautiful, fun and considerably more wonderful than I could have hoped.

The garden is a wonderful mix of ‘garden rooms’, of calm and formality, vibrancy and humour. Owners David Wheeler and Simon Dorrell have developed the garden around the house, using the house as a backdrop to, and and as part of the garden. In the  picture at the start of the blog you can see the house being used for wisteria to grow up, to sow boarders mixed with annuals and perennials to blend and contrast. In the photo below, you can see that the house is also a stage upon which the garden can perform. 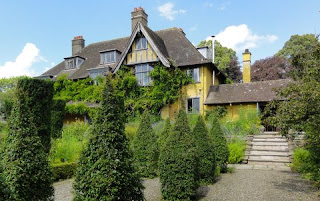 There is so much fun in the design of Bryan’s Ground. These formal pyramid-type shapes above are not box or yew, the usual choice when shaping bushes or hedges, but our native hawthorn (poss. Crataegus laevigata). And when they do use yew, the cut straight at the top to create doric-like columns, rising up amongst the greenery and flora like broken temples. 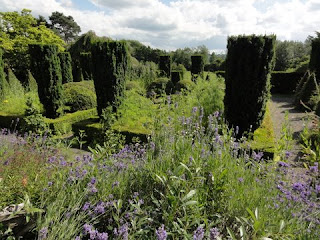 The fun is explored in a variety of ways. Objects that may of us would throw away become sculpture, like these old bikes hanging from a tree over towards their arboretum… 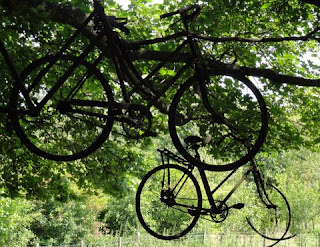 The base of an old spring bed to grow climbers up, and making art out of an old boiler… 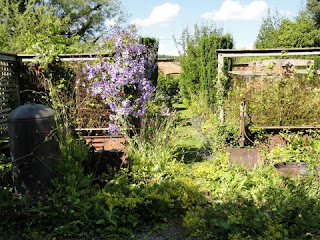 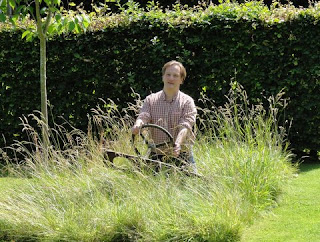 And using the remaining bed frame to make a delightful grass bed. 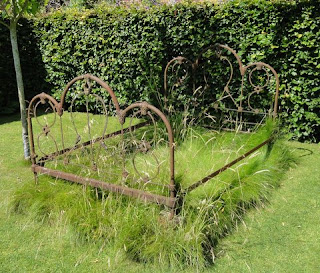 All these quirks only added to some lovely planting. I was reminded yet again, of the wonderful blues of Anchusa azurea ‘Loddon Royalist. 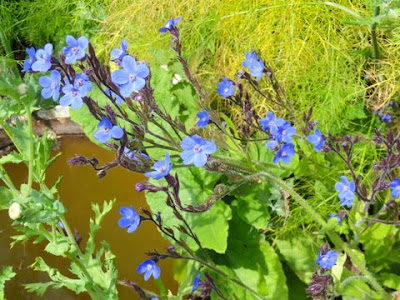 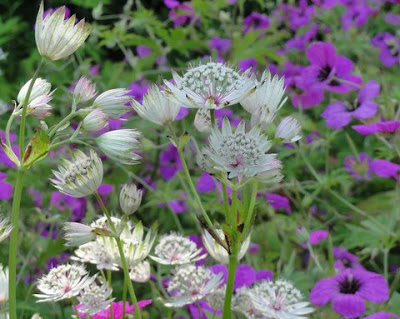 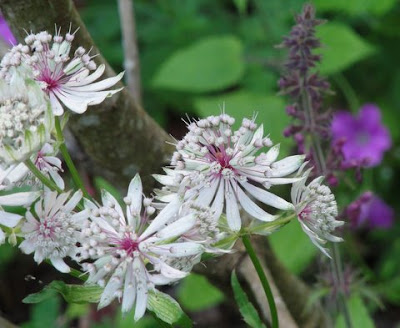 Even minus the flowering irises, the orchard teamed with fecundity. 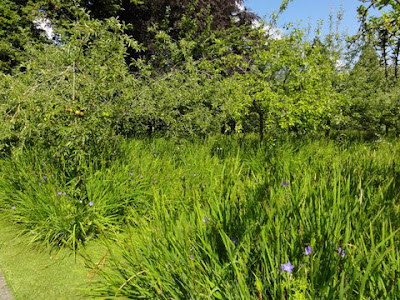 And around every corner was another delightful blend of recycling-as-art and planting. I picked up couple of purple sedums,  Sedum Bertrum Anderson, to take home for one of my stone planters, and as a memory of this elegant and witty garden. 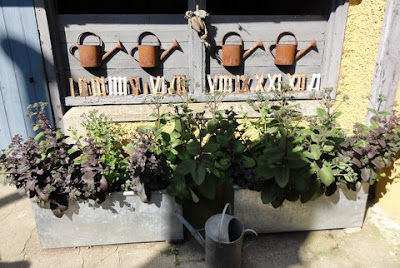 In fact I spent so much time focussing on the plants and garden that I didn’t get a photo of Nigel and Andy, so only have this brief shot of Nigel to prove we were really there with them! 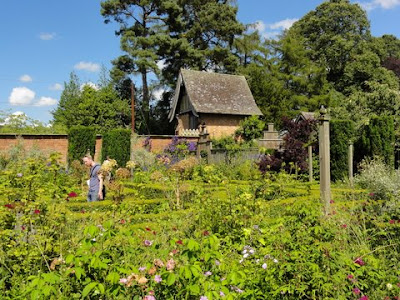 Bryan’s Ground is only open from April to July as the owners apparently view it as a spring-early summer garden. I suspect this is modesty, I’m sure it would be beautiful and hold interest all year around. I certainly intend on visiting again. Perhaps it will be me next year, rather than VP, showing you photos of the irises in the orchard!