I ran my first gardening workshop today. Yes, someone actually paid me to show others how to grow!

The workshop was at BarracksLane Community Garden, where I’m the freelance coordinator a couple of days a week. In that role I do everything from organising events like seed and plant swaps to the annual harvest festival, to organising the volunteers, managing the website and doing interviews on BBC Radio Oxford. My work for Barracks Lanes doesn’t usually involve gardening itself. However, the opportunity came up to run a women’s-only basic gardening workshop.

My work at the garden is funded by the Local Food Programme, and the aim is to encourage more people to grow and buy local food, hence the plant swaps and harvest festivals. We also want to reach people in the Black Minority Ethnic (BME) community in Oxford. After all, the community garden is everyone’s garden and we want people from every part of Oxford and every social and cultural group to use it.

So when the Women’s Interfaith Network and Refugee Resource got in touch about maybe doing something together, it seemed like a golden opportunity to give something to a particularly disadvantaged group, refugees, and help the garden reach out to the BME community. The idea was to run some basic gardening workshops, showing women how they could sow and grow herbs and some vegetables on their window sills. The ‘women-only’ element was in respect for some of the religious and cultural needs. Some women who came today would not have been able to attend if it was mixed-sex. So this meant the garden needed to find a woman to run the workshops. Would I like to do this? You bet!
Today was the first of two ‘Sow and Grow workshops for Women’, as I’ve named them. I showed the women how to sow herbs like coriander (the most popular!), basil, chives and calendula, along with lettuce and spinach. I demonstrated the process first, then got the women to all have a go.
Because many of the women were refugees, they have a very low, almost no, income, so I also focused on ways of growing with a limited budget in mind. This meant using tetra paks, used juice and milk containers as pots, and used plastic mushroom and bacon containers as saucers. This is actually a great way of reusing before recycling as much as a way of saving money. I’ve had good success germinating seeds with tetra paks. Use a stanley knife to put in a couple of drainage holes and voila! Here is an example with a used juice container. 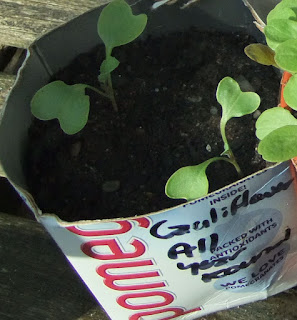 This was also the reason for focusing on growing on window sills. Most of the women don’t have gardens, so to ensure it was accessible to everyone I focused on window sill gardening.
So for a couple of hours, in the warm spring sun (I think I got sunburn – ooops – forgot the sun screen), about 20 women from a variety of countries and cultures started learning how to grow their own food. It’s only a tiny step, but from acorns….
Being my first workshop, it was very tiring. Lots of emotional and mental energy, let alone the physical; lifting 60 litre compost bags – don’t tell my Chiropractor. But it was also wonderful. Though nervous to start with, once I got going – hey, I was talking about my great love, growing food and gardening – the nerves were forgotton and I was so envolved it was just a joy.
There was a great buzz in the garden, women eagerly sowing their coriander and lettuce, asking questions, chatting, laughing. I think they really enjoyed themselves as much as anything. I admit to receiving some very lovely compliments, such as ‘you should have your own gardening show’ (! move over Monty). But the one that meant the most to me came after I answered a question from one of the women. She said ‘you are a great teacher’. This meant a lot because many of the women didn’t speak much English. Sowing and growing is quite visual, physical, and her comment suggested to me that I managed to get past the language barrier and teach, and that they learned. I’m kind of proud of that.
The next workshop is in early June and I’ll be showing them how to pot on their seedlings, and to take some cuttings to grow new plants. In the meantime, I’ll put up some pictures from todays workshop hopefully in the next week, when I’ve got copies from Sally at ReachAbility, who helped out and was photographer.
Wow. I got paid to show people how to garden. FAB!