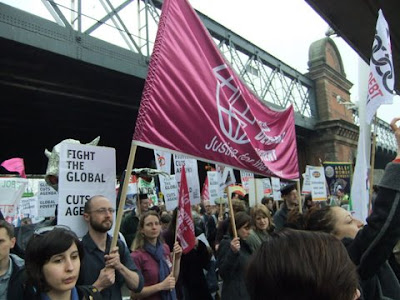 Kevin and I joined the WDM contingent of the March for the Alternative yesterday in London. Whilst I have some reservations about the TUC; refusing to let Caroline Lucas speak at the rally and their refusal to work with feeder marches from groups like UK Uncut, for example, I felt it was important to join the mass of solidarity of people around the UK against the governments’ cuts agenda and neo-liberal policies. 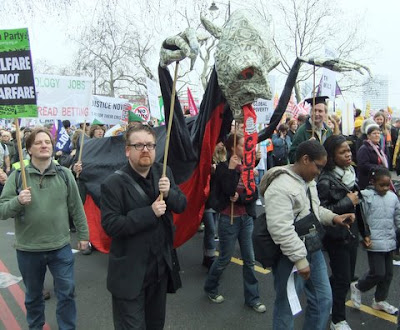 It was a massive rally, over 600,000 at least. Of course the media reported a smaller figure, like 250,000, but given we heard police say something like 600,000, and the police under-estimate rally figures all the time, I trust the higher figure more. 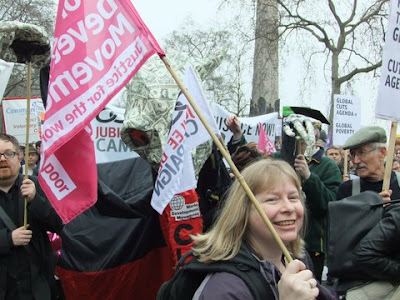 Of course, like all big rallies, it took 3 hours just to march from where we started at Embankment up to Trafalgar square – that’s about a mile and a bit. 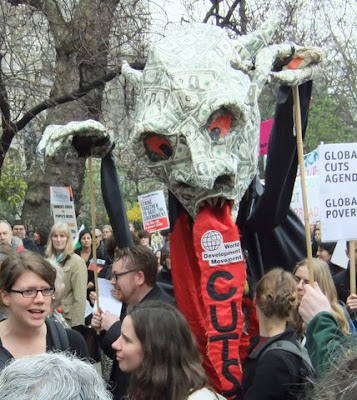 The cuts are going to get you…

At Trafalgar Square, Kevin and I left the WDM contingent with the plan of joining UK Uncut up at Oxford Circus. We stopped for a quick bite in our traditional rally eatery, St Martins in the Fields cafe in the crypt. Fortified by apple crumble and custard and tea, we headed up to Oxford Circus. 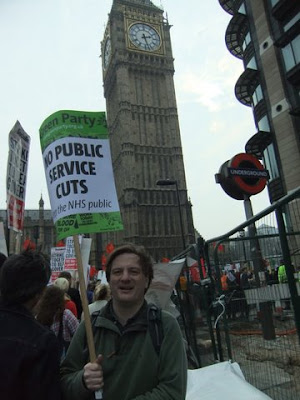 Kevin passing Biggus Bennus/Big Bernadette (as I like to call it)
Part way up Regents Street we had police vehicles speeding past us, and then found a large crowd of people with samba music heading our way. Turns out the riot police were trying to stop UK Uncut, so between that and the large crowd, we never made it to join them. 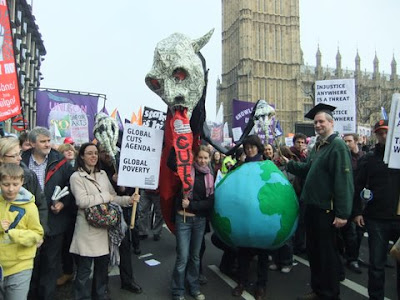 WDM staff and group activists, including Jeff, St Albans WDM, to right (academic cap)
We ran into Jenny & Mark (fellow allotmenteer) who were heading down to activities in Trafalgar Square. As we couldn’t get up to Oxford Circus, we joined the Samba group/anarchists etc and ended up in Piccadilly. 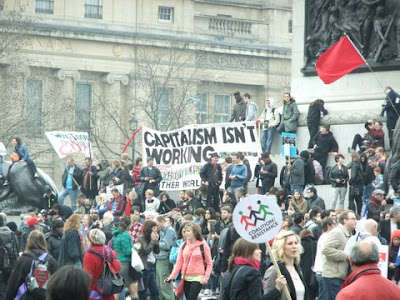 indeed, it is not (Trafalgar Square)
However, by this time more riot police were turning up, and it looked like a show down and a possible kettle was able to take place, so we scarpered.Time to head home. 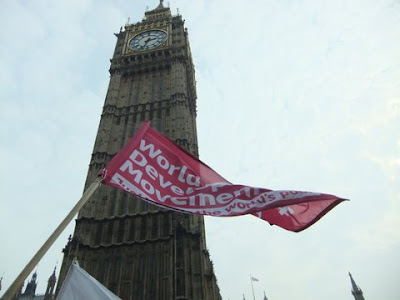 It was a good day. It was great to be a part of the WDM contingent. WDM has been joining the fight with people in the global south for years to fight the neo-liberal policies that are now being brought to the UK. It felt good to be a small part of bringing these global-local issues together on the march.

P.S. For an insiders view of what actually went on with the UK Uncut actions, including in Fortnum & Mason, visit the UK Uncut blog.

1 thought on “At the march for the alternative”