Yesterday was the harvest festival at Barracks Lane Community Garden. I don’t know why I haven’t written more about the garden before, given I love it and I work for it two days a week! Somehow I’ve never got around to it. Anyway, I’m working as a freelancer roughly 2 days a week, particularly working on their Local Food Programme, ie. organising workshops such as how to keep chickens or bee-keeping, and events such as plant swaps and yesterdays harvest festival. It’s basically my dream job, someone paying me to work and talk about gardens and growing! How cool is that?! 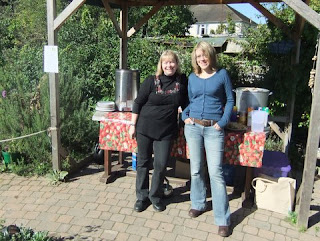 I pretty much organised everything, and was lucky enough to have some great volunteers to help pull it together on the day. My lovely friend Jackie, seen here on the right, helped out with the refreshments for a couple of hours. As well as tea, coffee and biscuits, we had baked potatoes, baked in the garden’s tandoor oven, and had gorgeous carrot and coriander soup from the Magic Cafe (great veggie cafe in East Oxford).

One of the most successful parts of the day was making apple juice. Lots of people brought apples from their gardens and allotments, and we were kindly loaned the use of a ‘scrattle’ and press from Braziers Park. 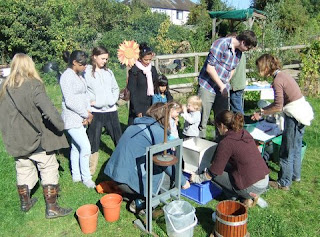 Making apple juice is fairly straight-forward. Cut up the apples (eating/juicing apples, not cooking apples) a bit then throw the pieces into a scrattle (or scratter). This helps break it down to pulp, which you then put in the apple press, press down and voila! Fresh juice. And it tasted amazing. The perfect mix of apple sweet, but not too sweet, no sickly over sugaring as you get from shop-bought apple juice. Kids really enjoy it and I loved seeing them use the scrattle then get excited about drinking the juice they made. It is a very effective way of bringing local food to them in a fun and healthy way.

We also had a ‘fruit and veg swap’. This is something I made up, it came to me when on holiday in Shropshire in July. The idea was that people would bring some of the fruit and veg they had grown, or turned into jam etc, and swap it with something else they didn’t have. We collected it all together for a couple of hours, then at 2pm did the ‘swap’. It was quite lively, lots of people chatting to each other. I had brought some carrots, tomatoes and garlic to swap, and luckily picked up some Damson and Apple jam. Damson jam, my favourite! 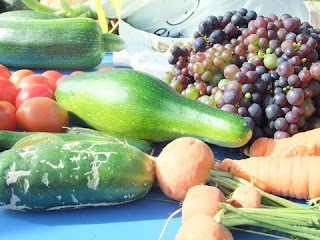 The little round carrots in the picture above is Paris Market, which I grew for the first time this year. They are great for pots as they are short and wide rather than long and thin. I was quite excited to pull them up and find they looked just like the picture in the Organic Gardening Catalogue. Score!

I also gave away some of my garlic and managed to enthuse quite a few people are how easy they are to grow. Most people don’t seem to realise that you plant one clove, and get a whole new bulb with lots of cloves the following year. So it was fun to chat about this with people, and some seemed very keen to get growing. See, I get paid to talk about growing garlic!!!

We also had a winter veg plant swap. This pretty much turned into a plant giveaway. For some reason most people find the idea of plant swaps odd. It seems if money isn’t involved, people don’t know what to think. My idea was rather than the usual plant swap, which is usually help in April/May and includes lots of plants to grow over summer, that we have a ‘winter veg plant swap’, just focusing on plants that grow over the cooler months and can be harvested in winter. So I brought along a bunch of seedlings including spinach, chard, kale and winter lettuces. Although people were shy initially about taking plants, I sweet talked many around and again got some people keen about growing some veg for winter.

At the end of the day, I was pretty much shattered, and still feel pretty tired. But also very happy. We were blessed with stunning autumn weather and lots of happy chatty people, and yummy food. I wrote a short press release where you can read a little more about the day, and uploaded some further pictures on the garden’s Flickr album.