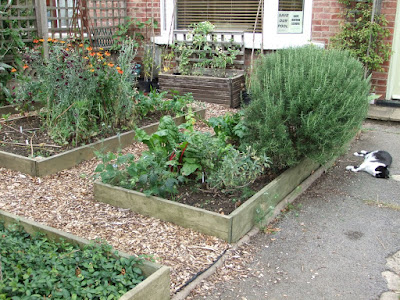 Since completing the redesign of the front garden back in April, it’s been coming along slowly but nicely. I’ve already had in the raised beds broad beans and lettuce growing, eaten and removed and since sowed more vegetables, such as kale, spinach and chard. My pear trees are growing well, but being only 1 year maidens, they don’t really show up much in photos yet! However, you can see the lovely Merlyn, having a snooze by the rosemary.

I’m pretty pleased with how it’s going, and have been most gratified by people passing by stopping to say how much they like what I’ve done. I just hope it inspires them to grow veg!

One of my favourite flowers, for it’s beauty and long season, Helenium ‘Moerheim Beauty’, has been flowering non-stop since June. I’ve dead-headed it occasionally and it just keeps sending up more and more shoots and new flowers. Here it is. What a beauty! 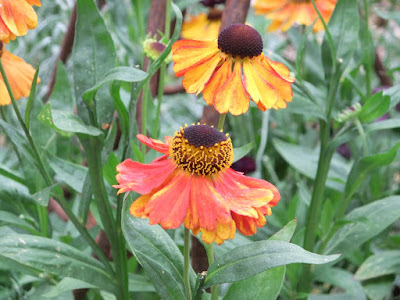