As mentioned in my last post, I’m keeping to my promise and telling you about Kevin’s and my cycle trip along the Kennet & Avon canal in Wiltshire. Be warned, it’s a tale of woe…

The idea of the trip was to be a gentle cycle ride in the early spring sun over a couple of days. We were to do the trip in two stages: Hungerford to Devizes, then Devizes to Bath. It didn’t quite work out that way. It helps to know that Kevin, my dearest love, is a keen and regular cyclist. He cycles 23 miles daily to/from work, and thinks nothing of a 90 mile day trip. His idea of fun is cycling from Oxford to Edinburgh, via Wales (he did this in 2005 for the Make Poverty History cycle ride). I, on the other hand, pootle about in Oxford on my lovely lecky bike (electric bicycle), if I’m lucky doing 23 miles in two weeks. Therefore, the suggested route, about 35 miles per day, seemed quite reasonable to Kevin. I was concerned whether I could really do it and suggested we stick to about 20 miles per day. But Kevin had no doubts. Bless.

What we got was almost constant rain from Hungerford to Devizes, getting heavier as the day went on. Ok, it wasn’t all bad. Here I am on my smart lecky bike, cycling alongside the canal at Little Bedwyn in a moment when the rain held it’s breath for a few seconds.

Ok, more than a few seconds. Here is a lovely picture of Little Bedwyn 5 minutes later (below). 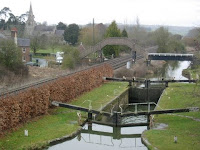 What I like about this picture, is that it has the medieval church, the late 18th century canal, and the 19th century train line, within its borders. Clearly the cycling about wasn’t all bad. However, the rain got heavier, I got tireder, and then bugger and blast, 3 miles outside Devizes my battery died. ugh. I wasn’t a happy bunny. I was having an Anne of Green Gable’s depths of despair moment. After much grumbling and the using up of the last remnants of my pitiful strength (woe!), we got to our B&B, Rockley House and was welcomed by the friendly owners, who didn’t bat an eye at us coming inside soaked and dripping. Amazing how getting dry and a warm cuppa makes things seem so much better.

That night I got little sleep. My legs were killing me. Woe was me. 35 miles?! Kevin was starting to feel a little concerned that maybe 35 miles was a bit much for me. 35 MILES! Ok, now Kevin realised 35 miles in one day, in the rain, was definitely too much for me. Thank you dear.

On Saturday we wandered around Devizes dodging bursts of rain. I’d really wanted to go to Devizes to visit one of the key strongholds of Queen Matilda. Matilda should have been queen of England after Henry I died in 1135, but that evil Stephen nicked her crown. Bloody men. She had an amazing life, including an incredible escape from Oxford Castle whilst surrounded by Stephen and his army in 1142, in the middle of winter, and walking straight through his army and on to safety in Wallingford to fight again. I think she is pretty damn wonderful. So I was chuffed to be in Devizes, walking Matilda’s steps, even if I couldn’t visit the castle as it is now a private residence (when the revolution comes it will be returned to the people and then I’ll be able to visit), and the fact my legs were achingly painful, AND the rain just wouldn’t bloody stop. If all else fails and I’m not in a garden, nothing like English history to keep my spirits (woe) up.

There is a positive turn to this pathetic tale of woe. Sunday we woke to blue skies! Wow, blue skies, remember those?! Ok, my legs were still aching, but my lecky bike battery was charged up and I was ready to cycle Devizes to Bath. Well, that was the idea. 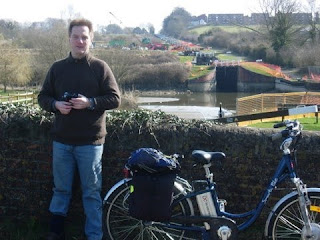 Just outside of Devizes is the Caen Hill Locks, 16 canal locks in a row going down, or up, a steep-ish hill. Apparently it can take a canal boat between 3 to 5 hours to get through all 16 locks. You would have to have patience and lots of spare time. My picture doesn’t really do them justice. Not just because they are working on them at the moment, but also coz, well, I couldn’t really do them justice and you cannot see the full effect. Suffice to say we were impressed, and of course it was down hill all the way. Wheeeeeeeeeeeeee. See how happy I am in this pic. Blue sky, going down hill, let’s pretend the legs are not aching… 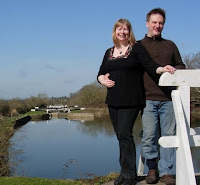 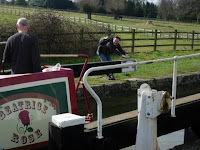 Kevin had fun playing with the locks. As a canal boat was going through one, he just had to have a go at opening and closing the lock gate. The boat owner was rather pleased and Kevin got his moment of canal glory. 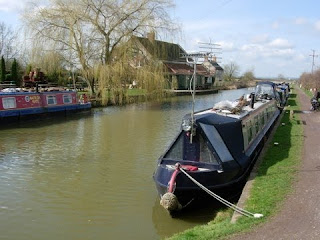 cycling by the ‘Barge Inn’, near Trowbridge

But it wasn’t all blue skies and fun. By the time we got to Bradford-on-Avon, I realised that me cycling from Devizes to Bath by the canal was a cycle-dream. For another day. So we changed our plans and decided to lunch in Bradford, wander around, then catch a leisurely train on to Bath, and from there, home. 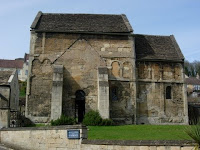 Bradford-on-Avon is a lovely town and has some good history that kept my mind occupied. For example, the lovely Saxon church that the town managed to ‘lose’ for several centuries. As you do. And the enormous 14th century Tithe Barn. To get an idea of scale, on the right is a little Kevin in the middle of the big barn. 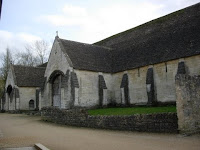 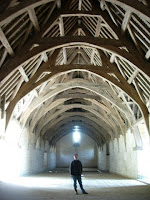 We made it to Bath and then home. Our fluff-ball (Merlyn) welcomed us. Well, I suppose he was wanting dinner, but we decided he must have missed us. The time of woe was over. And Kevin agreed that cycling 20 miles a day in future would be quite enough for this Gwenfar.